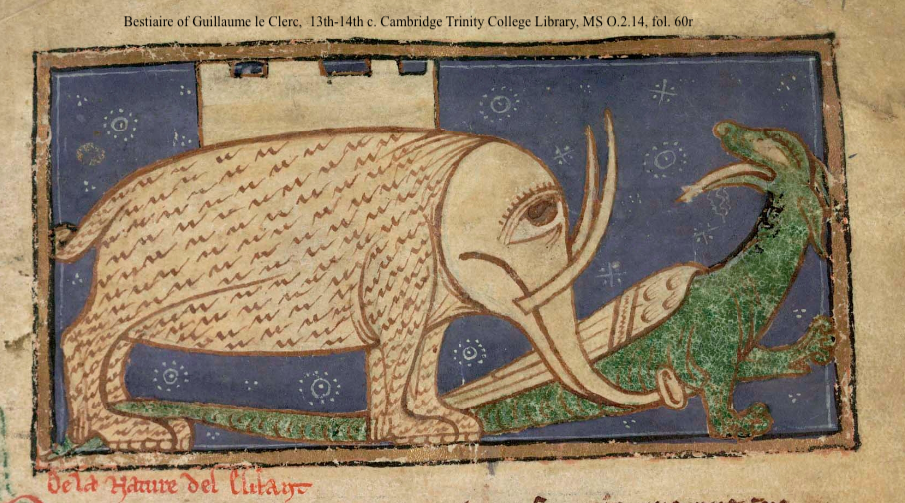 A few times already I have written about medieval bestiaries, that is about books on animals. They include descriptions of both fantastic beasts (see HERE and HERE), as well as real animals, albeit often with rather legendary approach (see HERE). In the latter group was undoubtedly and elephant.

Medieval bestiaries were based on antique texts, most of all on the works by Pliny the Elder. He wrote that of all the animals, elephants are the closest to humans in intelligence. They are wise and just, emotional, and in spite of their strength – gentle. They are afraid of mice and hate dragons. 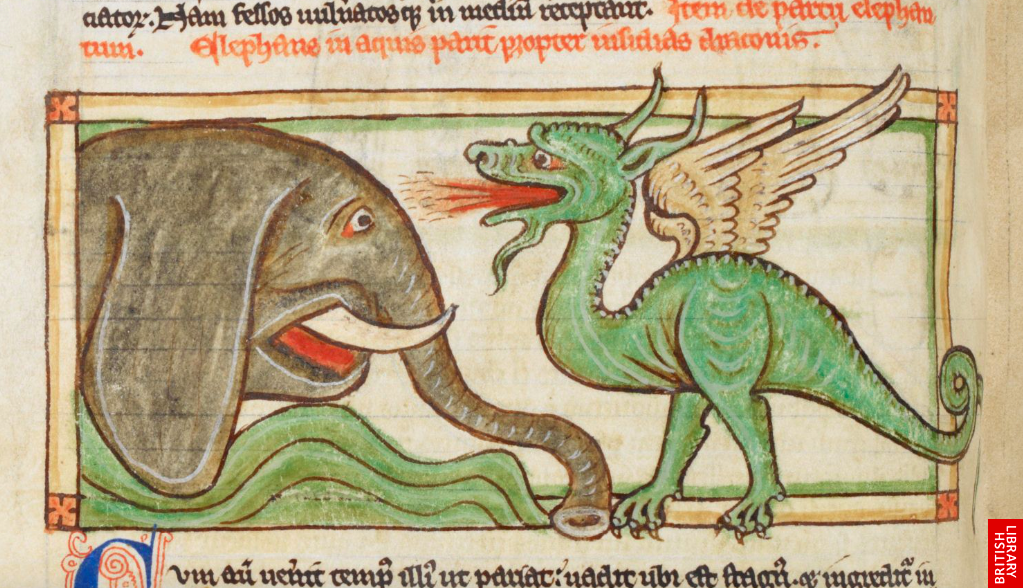 Interestingly, according to Pliny mixed blood of dragon and elephant was a source of a pigment called “dragon’s blood”. He wrote that a dragon strangles an elephant and sucks out its blood, but dead elephant collapses and crushes the dragon to death. Out of their carcasses and their mingled blood people were supposed to make this dye: of a deep red colour, especially useful in varnishes, enhancing shine of gold (or even imitating it). “Dragon’s blood” was very expensive, brought to Europe with exotic spices. In fact, of course, it was not made of blood of elephant and dragon, but of resin of certain species of some trees called dracaena (which derives from Greek “she-dragon”). 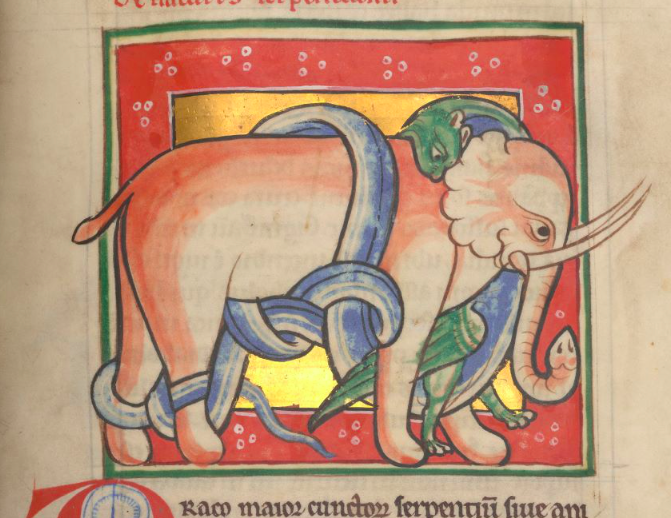 One of the weirdest legends about elephants is not their interaction with dragons, but a belief that an elephant… has no joints in its legs, and therefore can’t bent its knees. Because of that it was believed that if an elephant falls down, it can’t get up on its own. To sleep at night elephant had to lean against trees; so to capture an elephant hunter may weaken a tree – so it would break when an elephant leans against it, and the animal would fall.

But why capture an elephant? Unfortunately, mainly for its tusks; it was also believed that people suffering from haemorrhages should drink elephant’s blood.

All together, however, elephants were considered cooperative towards humans; especially useful at war: a construction full of soldiers could have been put on elephant’s back. 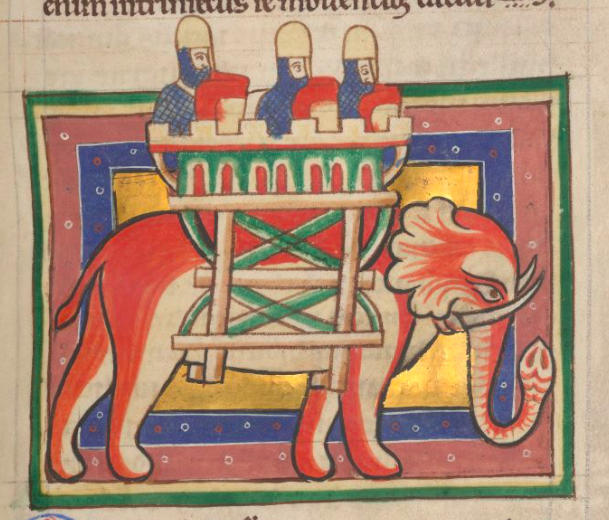 It is hard to say where did the legend about jointless legs of elephants come from. It is pointed out that this was how Jules Caesar described elks in his Commentaries on the Gallic and Civil Wars; and then he mentioned ures, noting that they were only slightly smaller than elephants. Perhaps some distracted medieval scribe confused those passages, connecting a story of knee-less legs with actual elephants. However, it is more likely that it is an echo of some much earlier tradition, because Aristotle actually wrote that in contrary to ancient beliefs elephants could bend their legs. Apparently this legend was “ancient” even for the Ancient Greeks.

Another story compared elephants to Adam and Eve: just as the first people before the original sin, elephants were believed to have no sexual drive. A male was supposed to be reluctant towards mating; if a female wanted to have offspring, she would lead a male east, towards Eden, where mandrake grew. She had to eat it, then give it to the male to eat as well, and then they immediately mated and conceived afterwards. 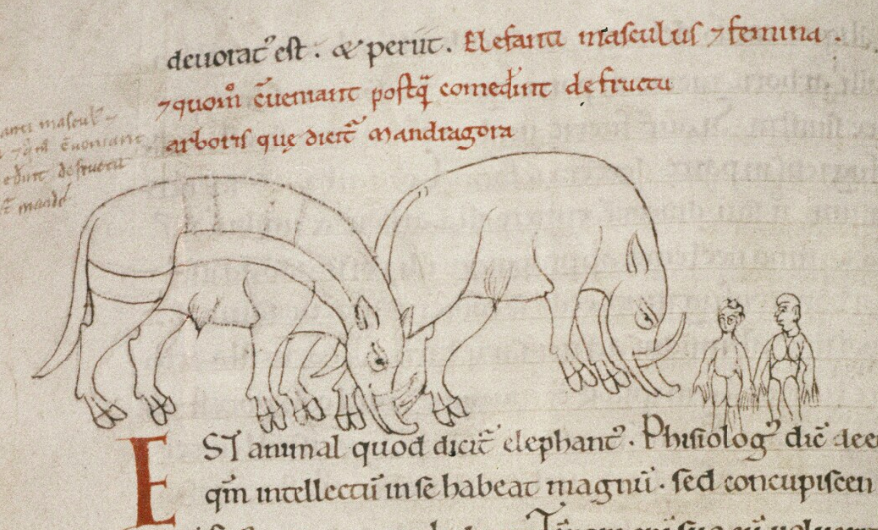 The mandrake is another interesting issue – it is a Mediterranean herbaceous plant, which is toxic, and became legendary. In the ancient times it was appreciated for its medical qualities; Hippocrates recommended small doses of mandrake tea as a cure for depression and anxiety, but he also warned that too much of it may cause hallucinations.

Aristotle noted that mandrake makes a head heavy; in general it was used as a sedative or sleep-aid, as well as painkiller during surgical procedures. 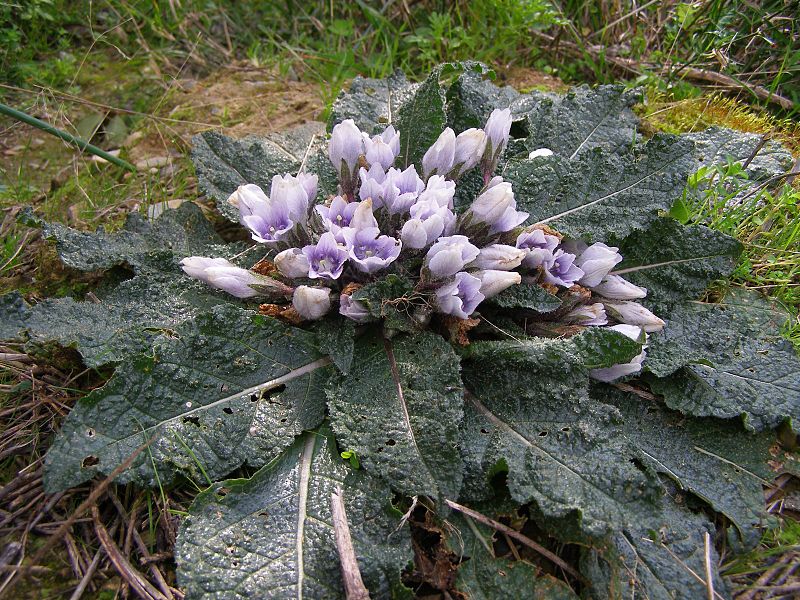 I suppose that someone simply overdosed it one day, and then recorded their experience. Because in some medieval treaties we may read that mandrake shines at night like a lamp, but if we try to pick it, it runs away! It could be immobilised by urine or menstrual blood. And also, it grows under gallows, out of sperm of a hanged man. 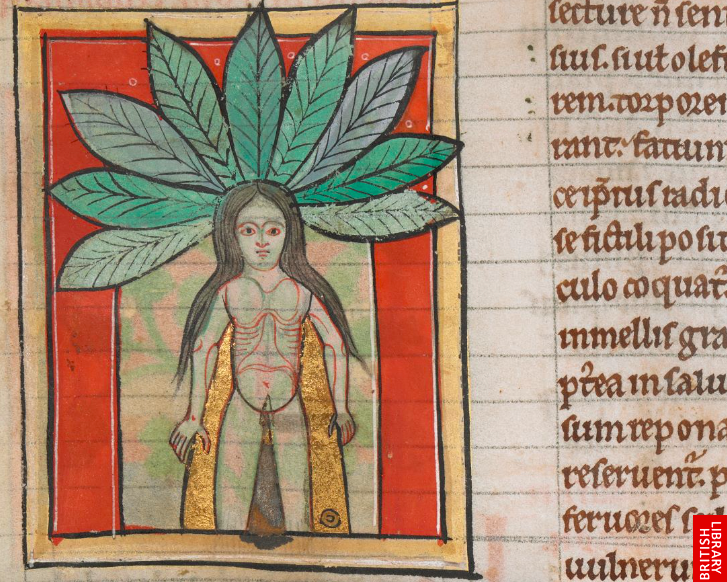 These legends were surely enforced by the fact that mandrake root may look a bit like a human figure. Pliny the Elder wrote that white-rooted species are male, and dark-rooted mandrake is female.

It was also believed that mandrake, when pulled out of ground, screams, and hearing it may cause lost of mind or even death. It was recommended to use a dog to drag up the plant: tying the dog to mandrake, and then – after moving away beyond the reach of the plant’s cry – calling an animal. Unfortunately that would cost the dog’s life. 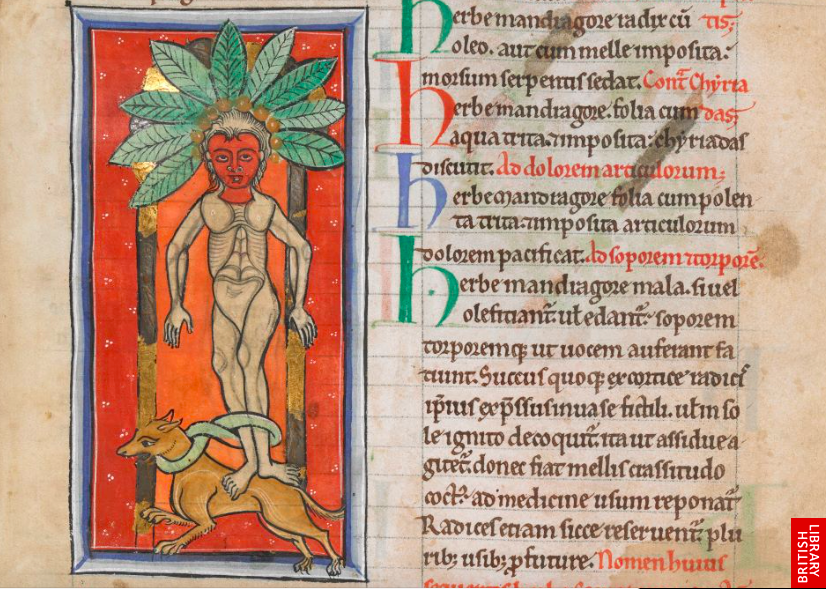 Interestingly, picking mandrake did not harm the elephants – on the contrary, it enabled them producing offspring. Because of that, mandrake was also considered an aphrodisiac. I bet that more than once some amateur of love adventures overdosed it, and then was truly convinced that the plant ran away, screaming.