Us and the War 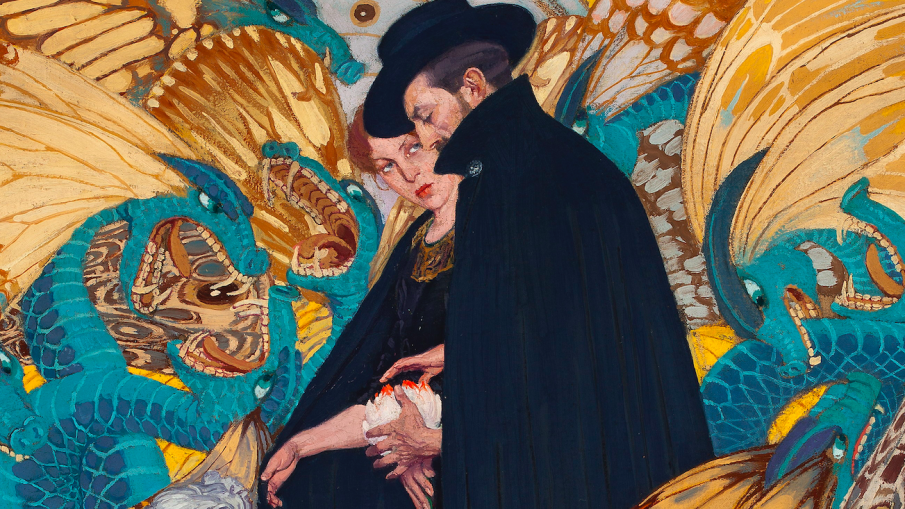 I am not a fan of modern art, but there are certain artworks – even the ones dating back to the 20th century – that I really like. One of them is undoubtedly “Us and the War” (or “The War and Us”) by Edward Okuń (National Museum in Warsaw). Okuń (1872-1945) was an artist representing „Young Poland” movement and Polish symbolism. He started his artistic education in Warsaw, then continued it in Cracow, Munich, Paris. Since 1898 he lived with his wife Zofia in Italy; they came back to Warsaw in 1921. According to the inscription on the back of the painting “Us and the War”, he painted it from 1917 to 1923.

Many art historians researching interwar art are troubled with the oeuvre of Okuń, because his works remained in stylistics of late 19th and early 20th century, as if he was stuck in the aesthetics of previous generation. I, however, always prefer Art Nouveau to any cubism, futurism, or constructivism – with all due respect to the lovers of avant-garde. For me same thing is with the late gothic art of the 16th century: I am aware that it was already the time of Renaissance, but I always prefer anything that still preserves medieval vibe. 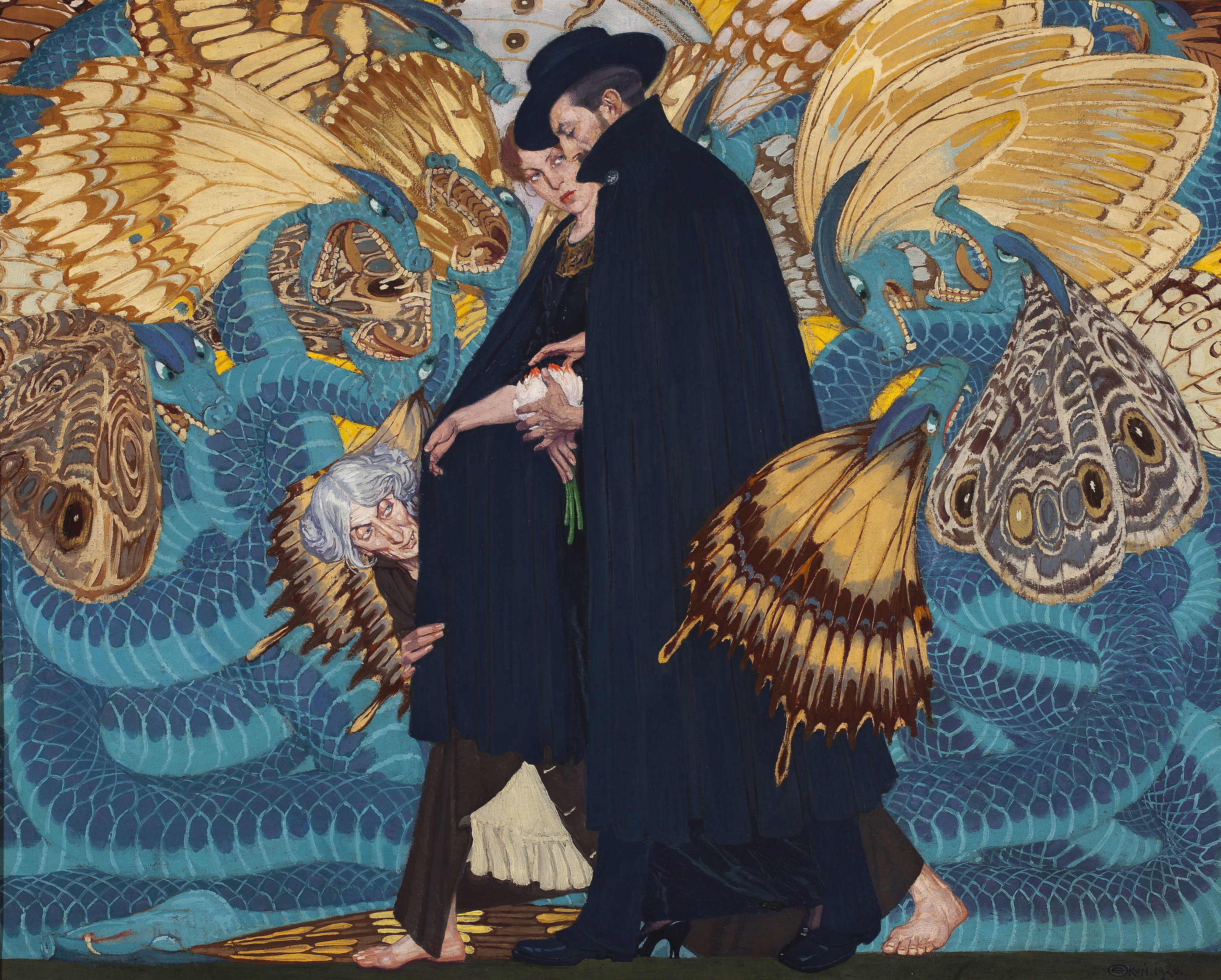 This painting by Okuń has references to various medieval cultural motifs – perhaps that is why I like it so much. The artist depicted himself with his wife: they walk together, covered with one cloak, trying to protect a bouquet. Cut flowers symbolise short and fragile human life.

Edward and Zofia in this painting try to ignore an ominous crone, who is sneaking by their feet, not letting them go. It is most likely personification of the War, or perhaps Death (unlike in German, in Slavic languages both “war” and “death” are feminine gendered nouns). The crone goes barefoot – it may be a reference to hunger and poverty that always come along with wars. 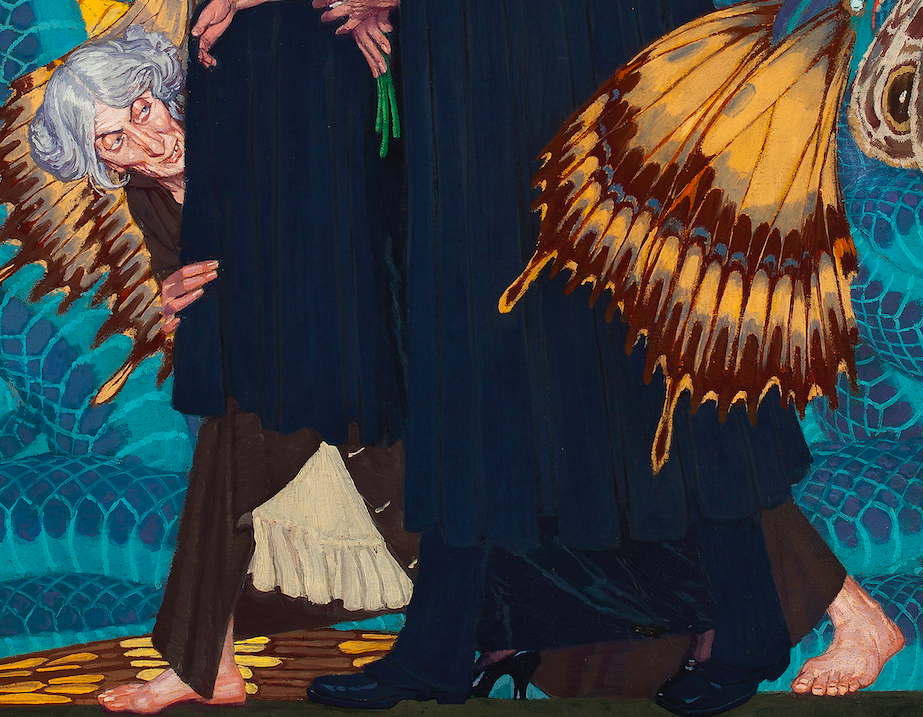 This is one of the medieval motifs: an old hag focused on destroying happiness of a young couple appeared in art and literature of the Middle Ages. In folk tales the old hag (vetula) cooperated with the devil – her aim was to put a loving married couple at odds, and eventually to make them kill each other. It was supposed to be rooted in envy; as a result an old woman in those stories comes off as impersonated evil, almost worst than devil himself.

The illustration of this legend – featuring devil and old hag receiving red shoes from him as a reward – appeared for example in the margins of Graduale of Polish King John I Albert (Jan Olbracht). The manuscript is in the Archives of Wawel Cathedral Chapter, and unfortunately – as far as I know – has not yet been digitalised.

Another medieval motif in Okuń’s painting is depiction of a chaos of war in the form of a decorative background, consisting of fighting dragons, or winged snakes. Dragon was often – for example in the Bible – associated with the snake, impersonating Satan. Fighting beasts, especially snakes, dragons or lizards, are interpreted as depiction of evil, hell, sin. One of very beautiful examples is a late gothic sculpture of one of the Cracow medieval houses from Main Market Square (ca. 1500, original in the National Museum in Cracow): 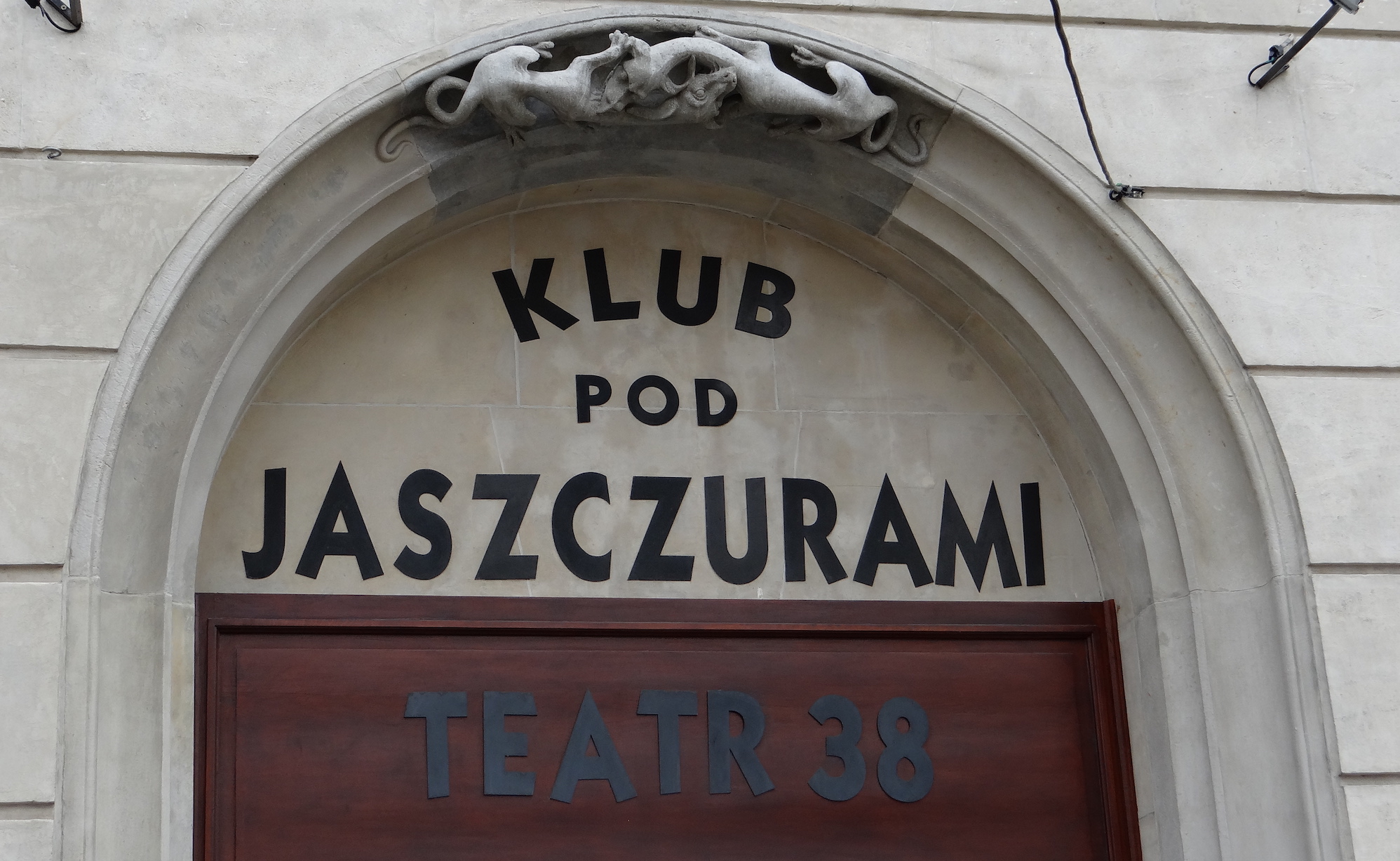 Copy of medieval emblem of the house Under Lizard, Cracow Main Market Square no 8, https://upload.wikimedia.org/wikipedia/commons/e/e2/Krakow_Rynek_Glowny_08_Kamienica_Pod_Jaszczurka_01_A-56.JPG

In the painting by Edward Okuń the background seems beautiful, but there is evil in that beauty. Can war be beautiful? In reality – no; but sometimes it is presented as such in propaganda.

This painting has been painted for quite a long time; starting from 1917, when the world was still struggling with World War I. You have to consider that for many people in Western Europe WWI was quite a shock – they thought that European society of the 20th century is too civilised to fight (sounds familiar?). Meanwhile, young Poles had been raised to fight since the end of the 18th century, when due to partitions Poland disappeared from the map of Europe. For subsequent decades (all together it was over 120 years) every generation took up a fight in uprisings. Basically the whole 19th century – in other counties an era of technical and scientific development, as well as economical growth – in Poland was the time of dreaming about regaining independence (which led to repeated failed attempts in the aforementioned uprisings). Realistically it was only possible in case of global conflict, in which occupants of Poland would find themselves on the opposite sides. And that finally happened in 1914-1918.

But even such a war – awaited and idealized – turned out to be horrible for ordinary people.

And why Okuń kept painting this picture until 1923? Well, for most of the Europeans the war ended in 1918, but it was not the case of Poland. At the turn of 1918 and 1919 we had Greater Poland Uprising, and then in 1919-1920 the Polish-Soviet War, which ended with Peace of Riga in 1921. Unfortunately, that is how it often goes: the war, expected to be over soon, stretches over many years. 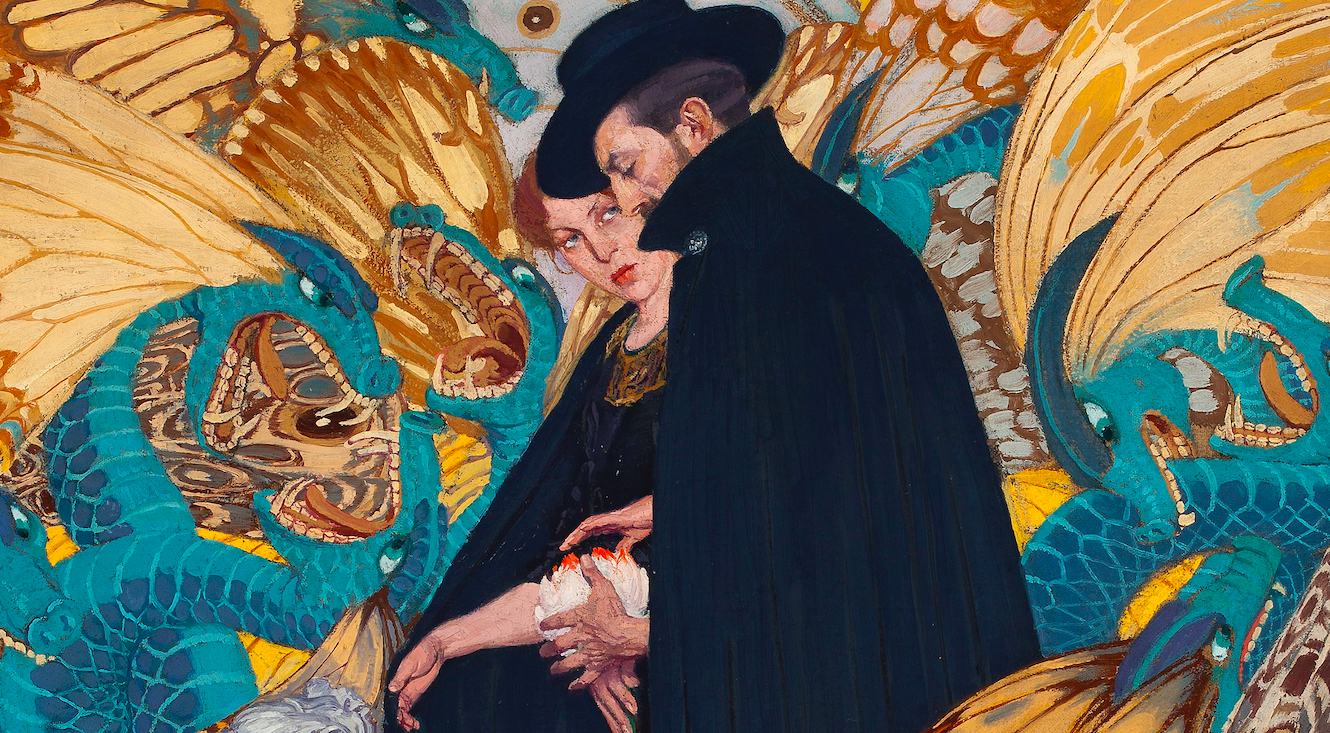 Edward Okuń and his wife Zofia managed to walk through WWI and subsequent fights. They survived most of the Second World War, even the Warsaw Uprising. But then they moved from Warsaw to Skierniewice – and unfortunately, in January 1945 Edward Okuń was shot there on the street.

His muse who sat to most of his beautiful paintings, his wife Zofia, lived until 1960. 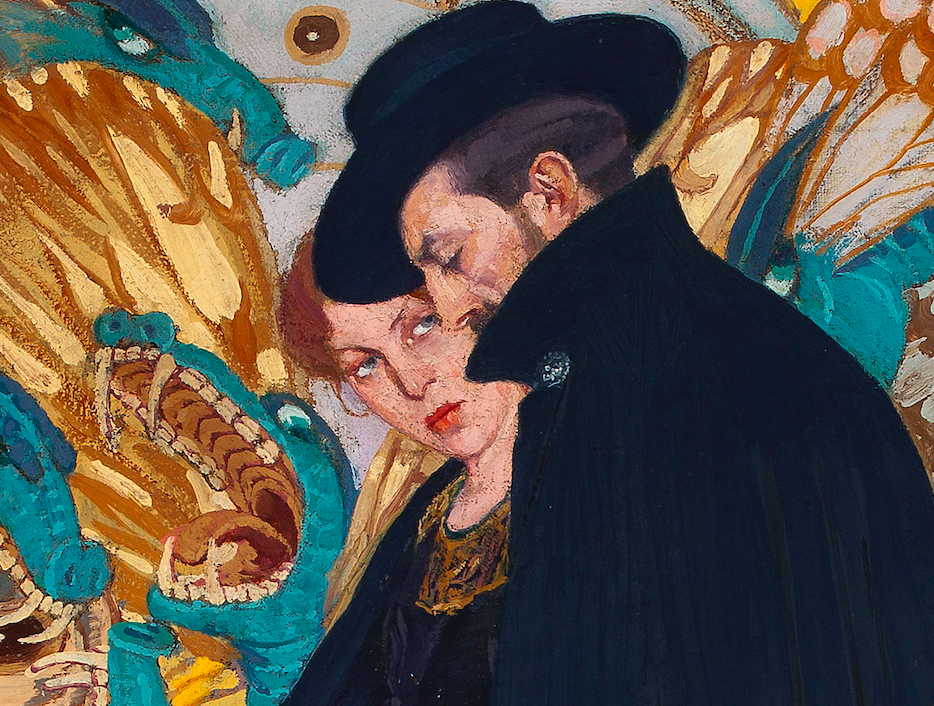 Today, the painting „Us and the War” seems terrifyingly up-to-date, even though it was created a century ago. Even the colours of the background fit in terms of reference to Ukraine.

And back then people also thought that there would be no more wars in Europe.