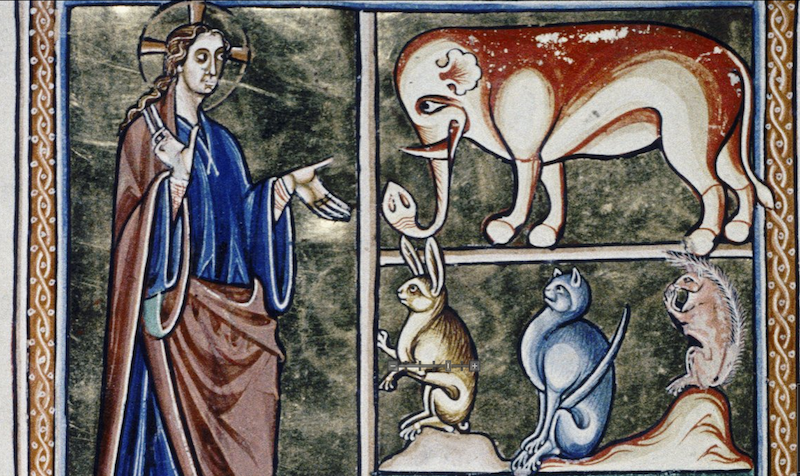 The users of the Internet love animals – especially cats, but not exclusively. Today I invite you to have a look at the subject of the animals in the illuminated manuscripts. Medieval books describing animals were called Bestiaries – they were created often as compilations of ancient and medieval texts on both theology and natural history. The main source was so called Physiologus, written probably in Egypt around the end of the 3rd century, which described almost 50 animals, mostly of the Mediterranean areas. The Bestiaries contained the descriptions of both real and mythological animals: it is for sure a topic for more than just one post on a blog. Many of the descriptions in those books had nothing to do with the biological reality, and the alleged activities of the animals were understood as Christian symbols, explained in the theological comments. Let’s have a look at a few examples; this time I would like to focus on some “real” animals, although their description may be quite a fantasy. 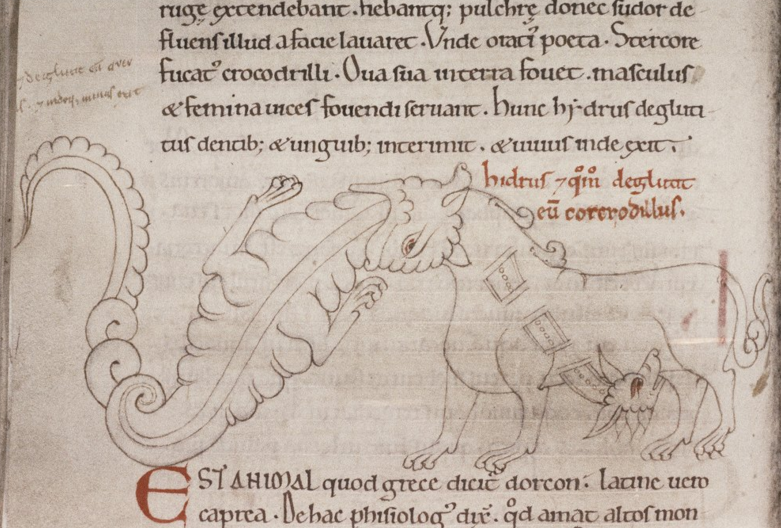 The image shown above comes from the oldest survived illuminated Bestiary manuscript (2 quarter of the 12th c., Bodleian Library, Oxford, MS Laud. Misc. 247) and it depicts… a crocodile! Well, it is actually a hydrus (which is supposed to be kind of snake, although looks like a dragon), which kills the crocodile. According to the descriptions, hydrus enters the crocodile’s mouth to be swallowed, and then it escapes eating its way out of the crocodile’s belly. It symbolises Christ entering hell to free the righteous souls… however we are not interested here in hydrus, so let’s get back to the crocodile. The image shows very well that the artist from Northern Europe never had a chance to see a real crocodile – he only read that it is a violent and dangerous beast, so he decided to depict it resembling w wolf. Also, Physiologus stated that crocodile is the only animal that can move its upper jaw; for a northern artist that meant that most likely its head is upside down! And if it spends time in water, it could also resemble a fish…

Interestingly, medieval Bestiaries give us quite fantastic stories about the animals that should be well-known in the northern Europe. For example the beavers are described as animals whose testicles were valued for making medicine, so for that reason the beavers were hunted. They were smart enough though to figure it out, so as the Bestiaries tell us, a chased beaver bites off its testicles and throws them to the hunter, who then lets the beaver go. Such a castrated beaver, if chased again, would show the hunter that he has no testicles anymore and that would save its life. That bizarre story comes with a moral: if sinner manages to cut off all his vices (as beaver cuts off its testicles), the devil will eventually leave him alone. 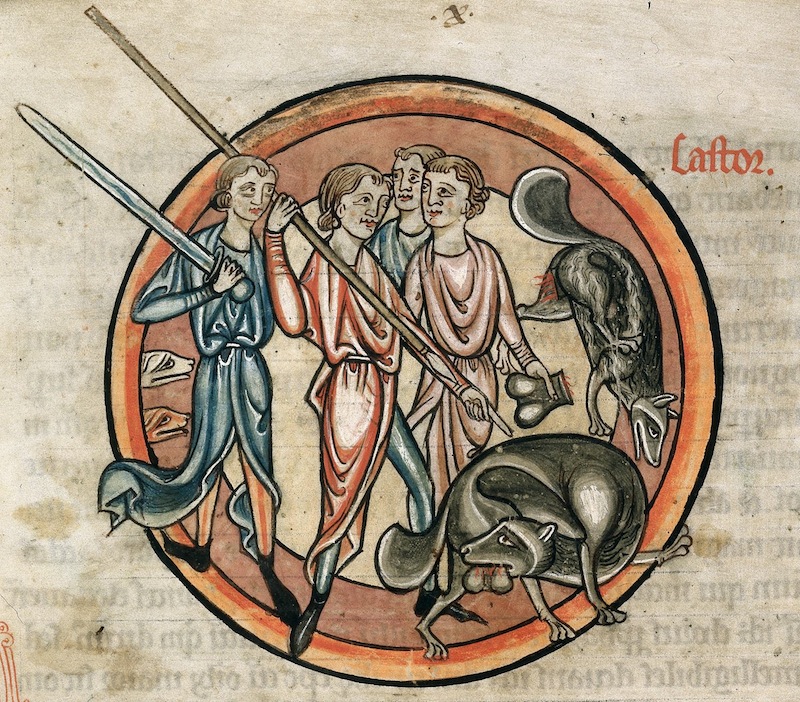 An extremely interesting story goes with the description of the badgers; apparently they are very good in a team-work. According to the Bestiaries, badgers dig their holes in a peculiar way: one lies down at the entrance to the hole, holding a stick in its mouth, while the others load soil on its belly. Then two badgers catch the stick with their mouths and drag the badger-wheelbarrow away – that i show they remove the earth they have dug out. 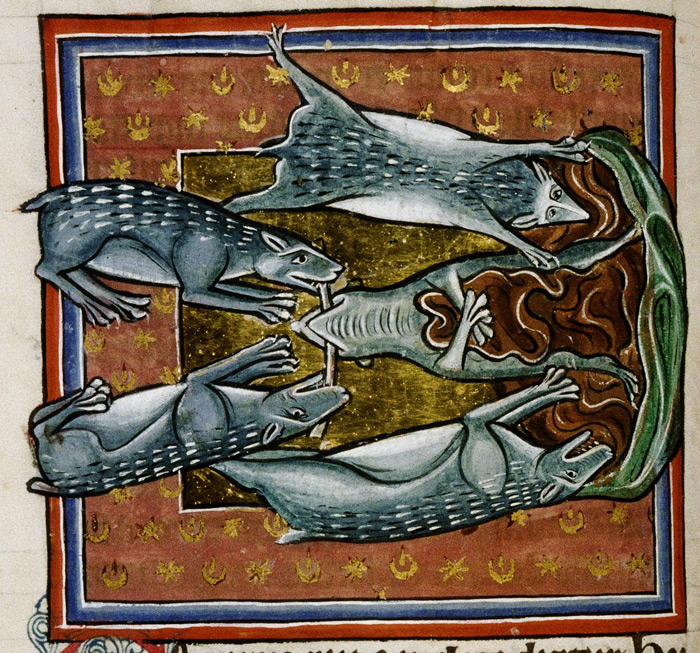 And finally let’s focus on an animal that happens to have extremely good PR: that is a hedgehog. We were all growing up watching and reading the tales in which merry hedgehogs walked around with the apples on their backs. No-one ever tells the children that hedgehog in fact eats meat, that it is simply a predator. Such a positive PR was apparently created by the hedgehogs already in the Middle Ages; according to the Bestiaries, a hedgehog in the time of wine-harvest climbs the vine (!) and removes the grapes throwing them to the ground. Then it climbs down and rolls over the grapes on the ground, collecting them on the spines. That i show the hedgehog gathers grapes, and takes it to its hole to feed its offspring. 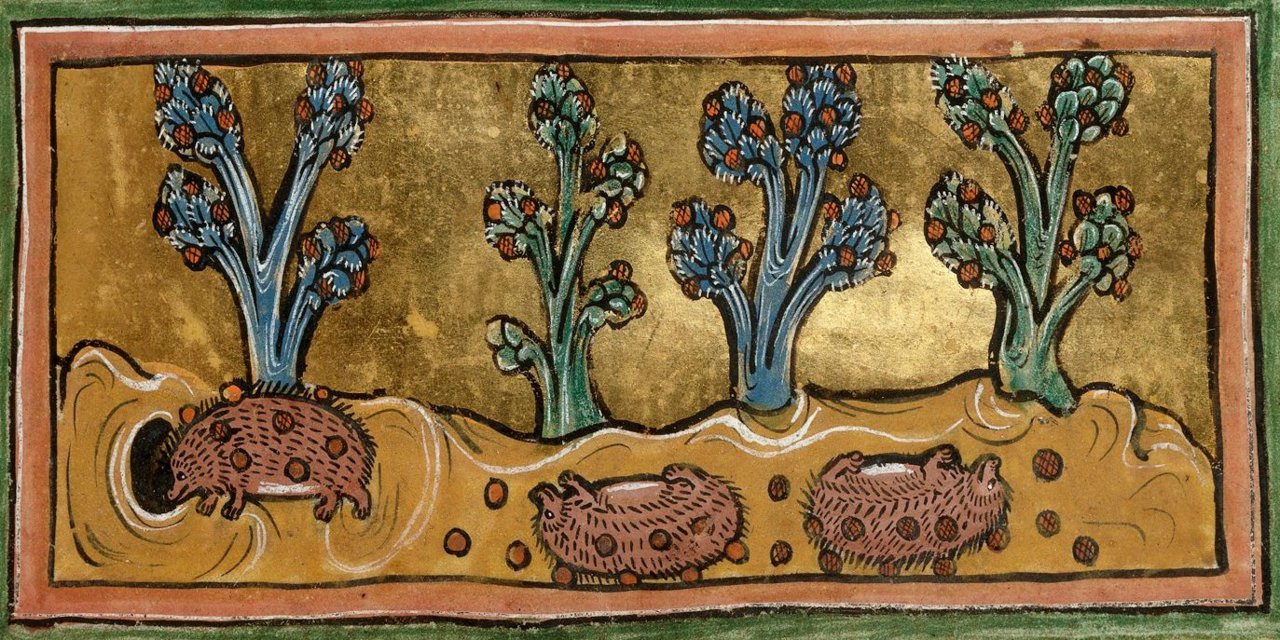 We must admit that the hedgehog is a master of the marketing, since Middle Ages until today. It is also so far the only animal that became a star of a video produced by Obrazki NUNU & Discarding Images, based on a medieval Bestiary of Rochester (British Library, London, Royal MS 12 F.XIII). So let’s watch the video and learn from the hedgehogs how to create a positive image, concealing natural tendencies to violence. A good self-promotion has always been a key to success.