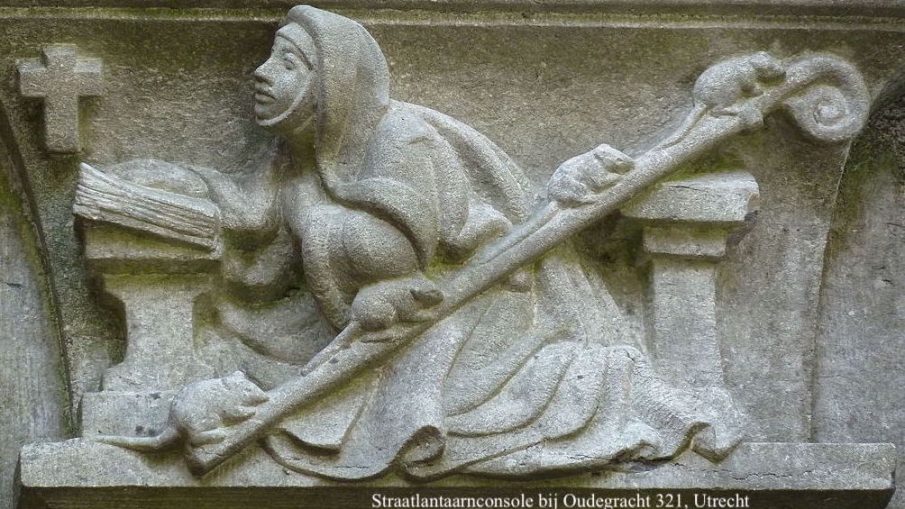 Depictions of Saints and their patronages is an infinite source of all kinds of curiosities. An art historian working on medieval religious art has to study carefully mysterious attributes and surprising storylines of the Saints’ lives. And as I currently work on the Polish version of the ICONCLASS database, I keep stumbling upon various problematic issues.

First of all, Gertrude the Great was never an abbess – when she came to the Helfta monastery, current abbess was also named Gertruda, and the two got confused later. As a result, religious art often depicted Gertrude the Great as an abbess (with a pastoral staff) – so it is indeed worth noticing while describing her iconography. The other problem is calling her “Cistercian” nun; she was usually depicted as Benedictine nun, which is probably correct. The monastery in Helfta formally never belonged to the Cistercian congregation; it was somehow undefined: Benedictine but following Cistercian spirituality. Cistercians used the Rule of St Benedict, but focused on returning to the Evangelical simplicity and poverty; that was also accepted by some monasteries that never officially joined the Order of Cîteaux. As a result, St Gertrude the Great is “claimed” both buy Benedictines and Cistercians. Personally I would prefer avoiding the distinction in this case in the Iconclass database. 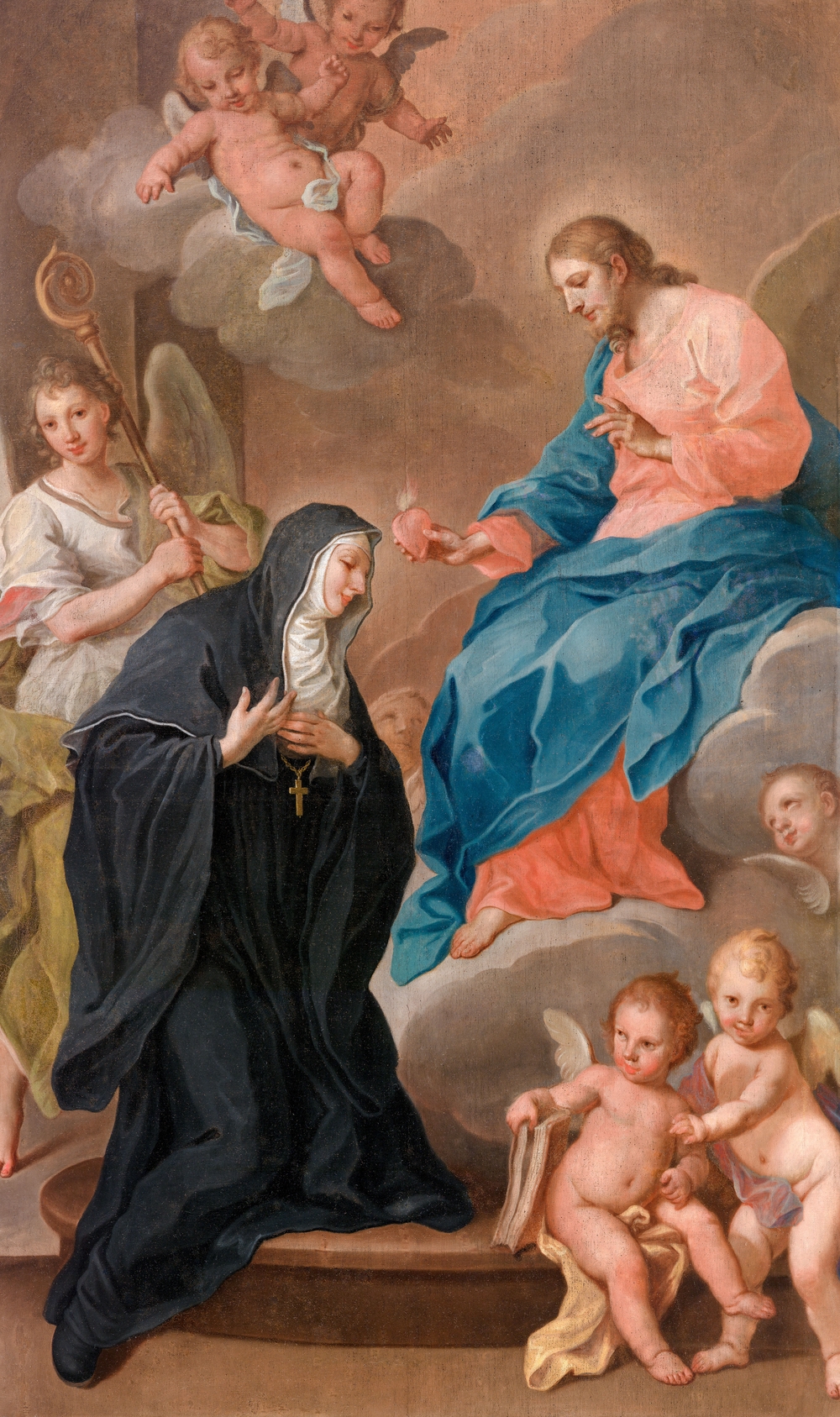 There is no such problem with Getrude of Nivelles: she was indeed a Benedictine nun, and an abbess. She lived in the 7th century; she was a daughter of a nobleman of Kingdom of the Franks, Pepin of Landen, and St Itta, who founded the monastery in Nivelles (nowadays Belgium). Interestingly, Gertrude’s attribute are… mice! Sometimes they walk along her pastoral staff. 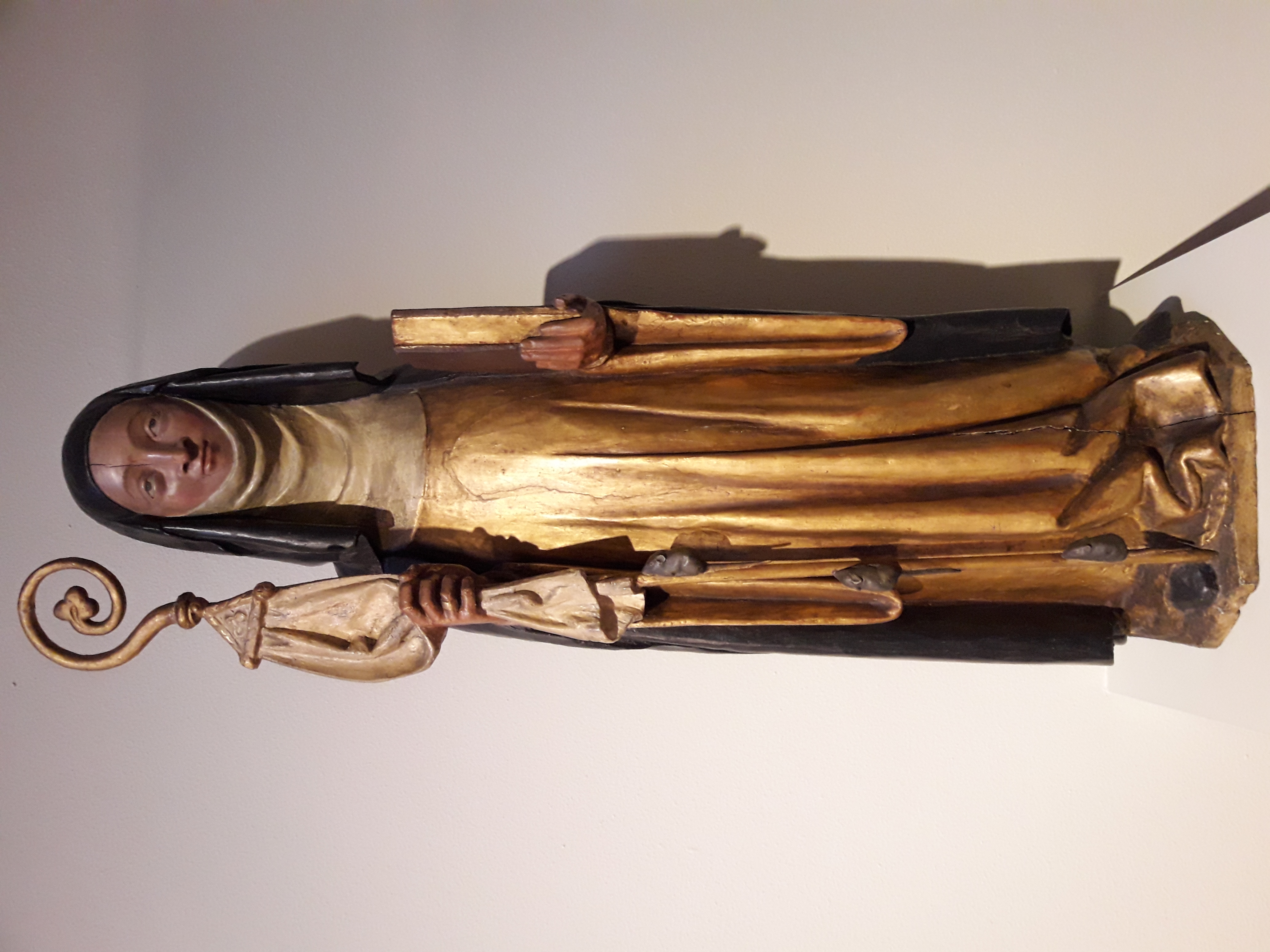 It was believed that one day St Gertrude saved monastery’s supplies by repelling mice only with the force of her prayer. That is why St’ Gertrude became a patroness against rodent plagues, protecting from rats and mice. Mouse in medieval art usually symbolised devil (I wrote about that earlier, post available HERE). St Gertrude with mice is no patron of rodents, but rather their tamer; her attribute may be compared to demon as an attribute of some other saints (about that I wrote HERE). She is a patron of cats, though. In modern art she is often depicted with a cat. 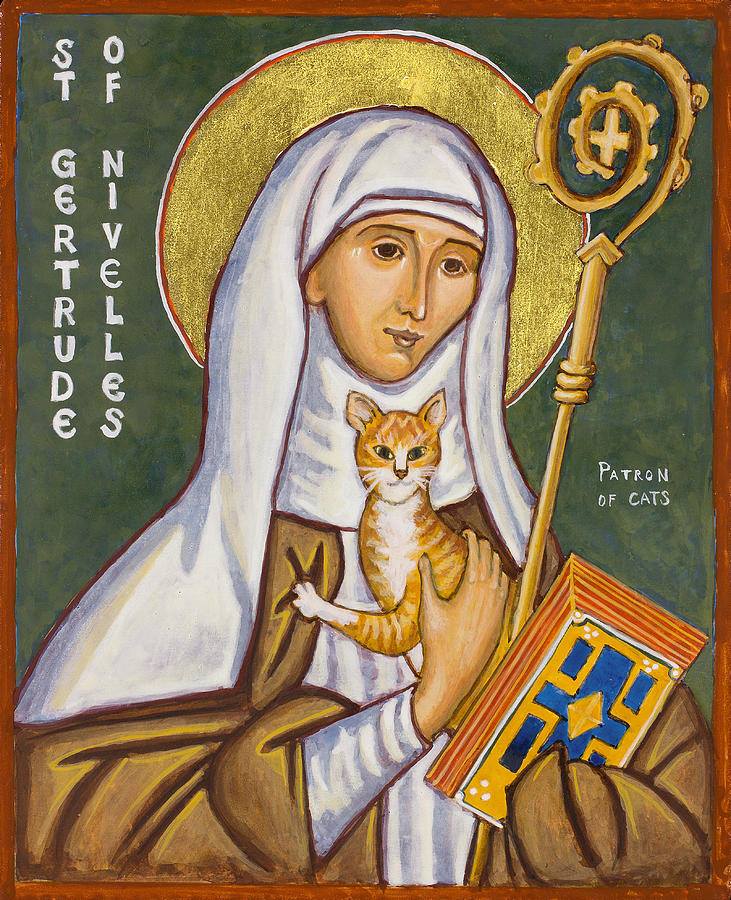 Although, as I keep saying: everything already happened in the Middle Ages: 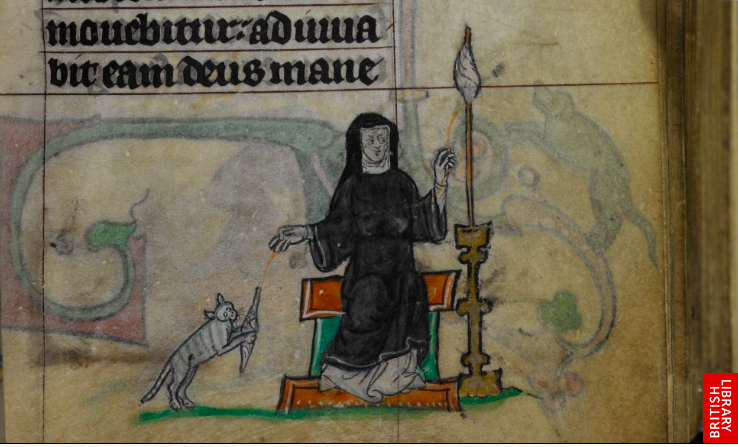 We could draw a conclusion from this that St Gertrude could be announced a patron saint of the Internet, almost taken over by cats; but no, this position has already been taken by St Isidore of Seville. He was the most popular early-medieval scholar, an author of Encyclopedia used by many subsequent generations. We could say that he impersonates Google and Wikipedia, combined.

But to get back to St Gertrude; the one from Nivelles was actually quite venerated in medieval Poland. In the 11th century the abbess of Nivelle monastery was Adelheid, sister of Richeza of Lotharingia, who married Mieszko II Lambert and became the queen of Poland. Richeza and Mieszko named one of their daughters Gertrude – I invite you to check out website gertruda.eu (with summary in English), dedicated to this princess and her amazing book of prayers (Codex Gertrudianus).

Then, in late-medieval Cracow there used to be a church dedicated to St Gertrude of Nivelles; it was outside the city walls and surrounded by a cemetery for executed criminals. Neither the church nor the graveyard survived; there’s only St Gertrude street today. By the end of the 18th century Cracow lost the right to conduct death sentence, and so the cemetery went out of use; abandoned church was demolished in the 19th century. 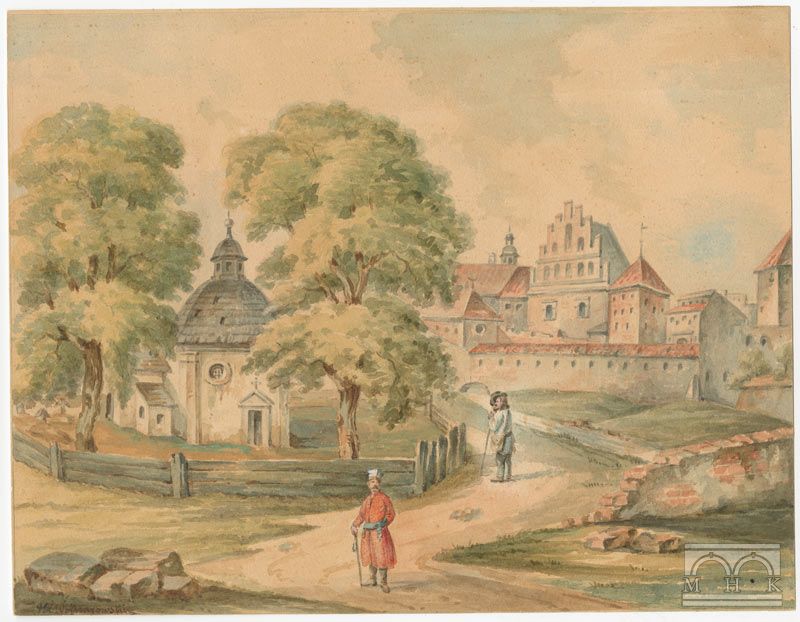 Funding of this church was related to a huge city scandal involving Andrzej Wierzynek, a member of a very wealthy and respected Cracow family Wierzynek. He was in the city council, and unfortunately had been stealing city funds. One day in 1406 he got caught: a purse full of stolen coins slipped out of his pocket while he was paying wages to the city hall employees. He was immediately sentenced and promptly executed without chance to confession, therefore he could not had been buried in a blessed soil. He was buried outside the city walls; his son, Mikołaj Wierzynek, bought that piece of land and funded St Gertrude church on it.

Finally, I would like to tell you a story about a founder of female Benedictine order, joined later by both aforementioned Gertrudes. It was St Scholastica, twin sister of St Benedict; she established monastery for women close to the male monastery, founded by her brother. The legend says that Benedict and Scholastica talked quite often; one day she realised that she was about to die soon. She did not tell her brother that, though, but when they met and talked until late evening she asked him to stay with her longer, perhaps until dawn. Benedict refused, determined to get back to his own monastery that night, so Scholastica prayed, and suddenly a huge rainstorm occurred. Benedict realised that it was her doing; he got irritated, but she told him: look, you did not listen to me, but God did immediately. If you want to, just go. He reconsidered, and decided to stay and wait until the storm was over. He left his sister in the morning and never saw her again, because she died three days later. 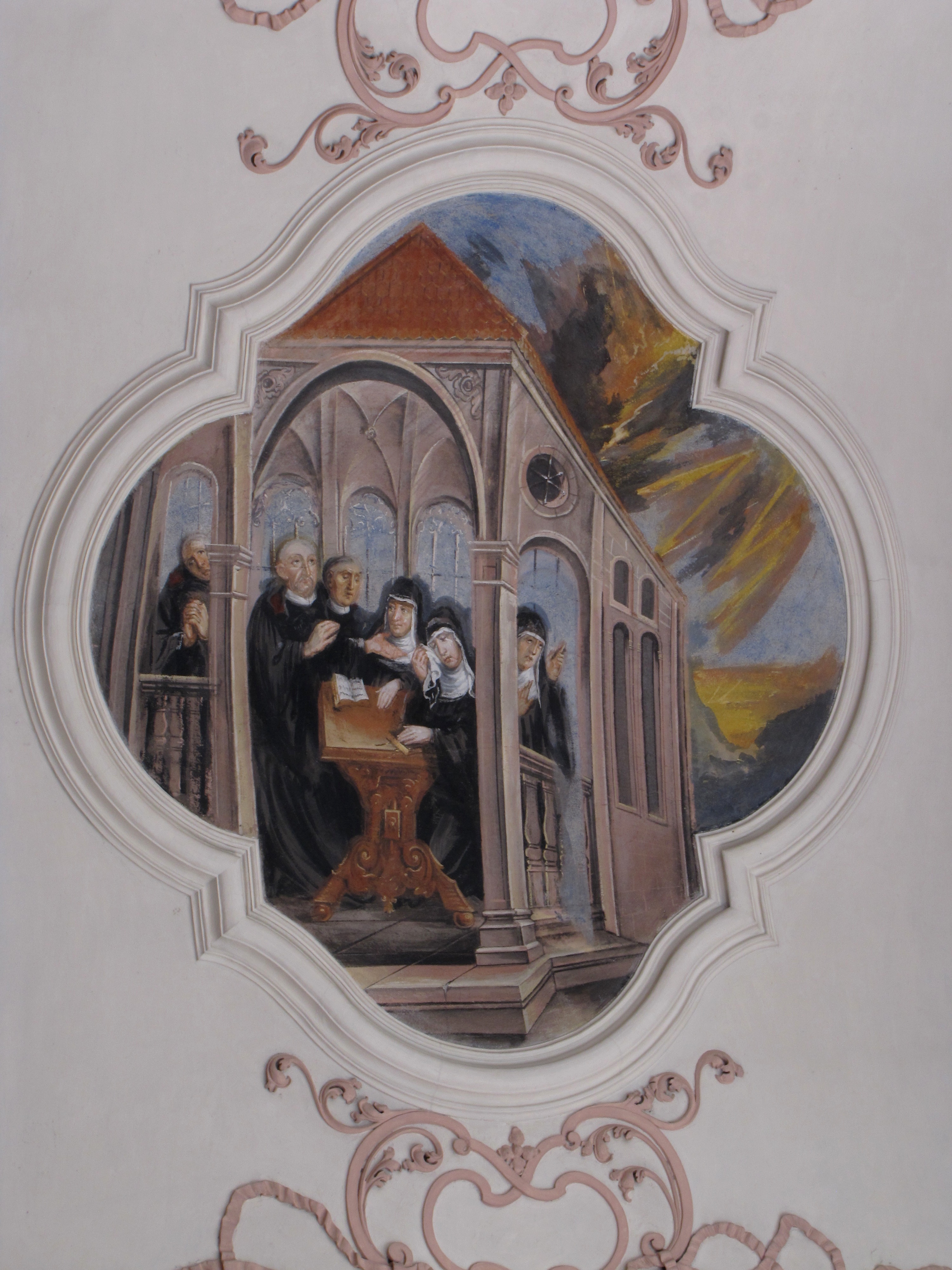 So, if you ever get caught by a thunderstorm, pray to St Scholastica. If you are troubled with mice of rats, pray to St Gertrude. Meanwhile, I am getting back to my Iconclass work – I feel I could use some support of St Isidore.