As it happens, lately I have been staying in a place with lots of cats. I do not consider myself as a cat person (I do not have my own cat), but I must admit, those cats are intriguing creatures. Especially when there is, let’s say, eight of them.

As usual, being around cats makes me think about the cats in medieval art.  Truly, there are lots of them. Cats in religious scenes, cats in genre scenes, cats in the margins of the manuscripts’ pages, cats in the decorations of churches… If you say that cats are stars of our contemporary pop culture (who has not watched funny cat movies in the Internet?), I will reply as usual: everything already happened in the Middle Ages. 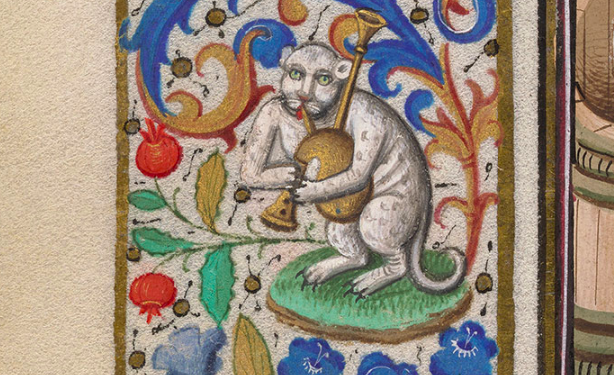 Cats licking their butts? Sure, there’s plenty of that as well. Especially interesting is the one above Christ from Apocalypse (initial from the Missal ca. 1440-60, Manuscripts and Archives Division, The New York Public Library, MA 112 (MssCol 2557), fol. 7): 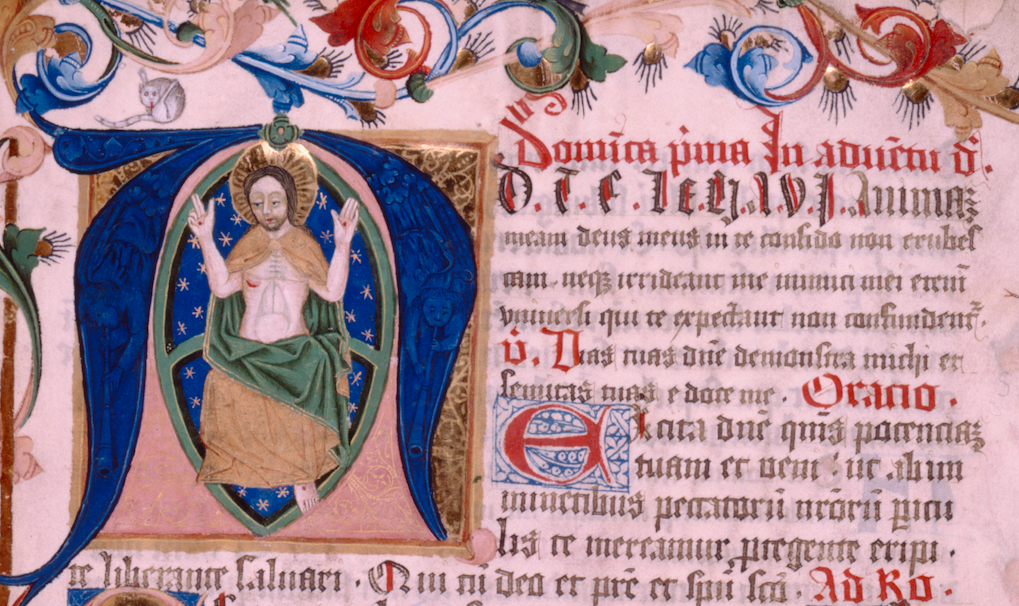 But the presence of cat in the books is not only limited to their images. Sometimes cats just ruined manuscripts – two interesting cases were recorded on medievalfragments blog: of a cat who walked through the open book (having stepped into an ink first) and of another one… who just peed on the manuscript. 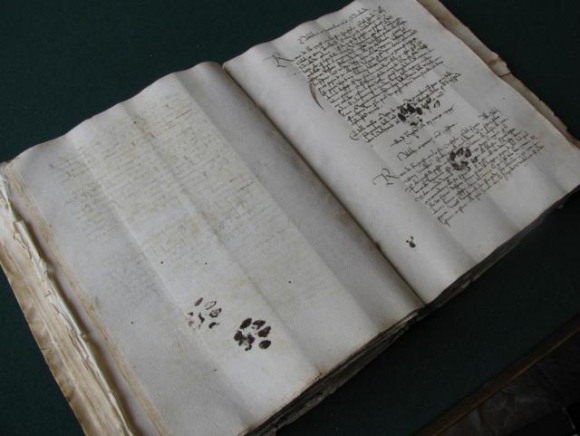 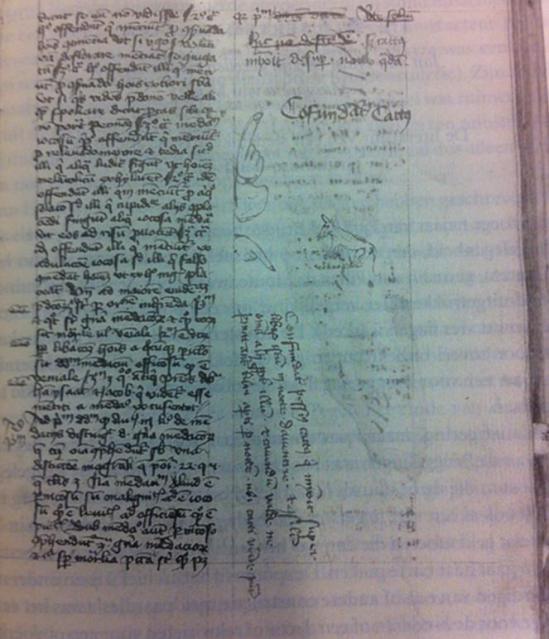 As it happens, there are quite lots of posts on cats in the Middle Ages on various blogs. I have also written about cats before – underlined phrases in this post redirect either to some sources, or to my earlier texts.

So, first of all, cats were simply considered useful, keeping rodents away from houses, libraries or churches. On a blog of Prof. Erik Kwakkel  (which is brilliant!) you’d find photo of the door of Chetham’s Library, which have a cat flap; a very similar one may be seen in late medieval door in the collection of the Walters Art Museum: 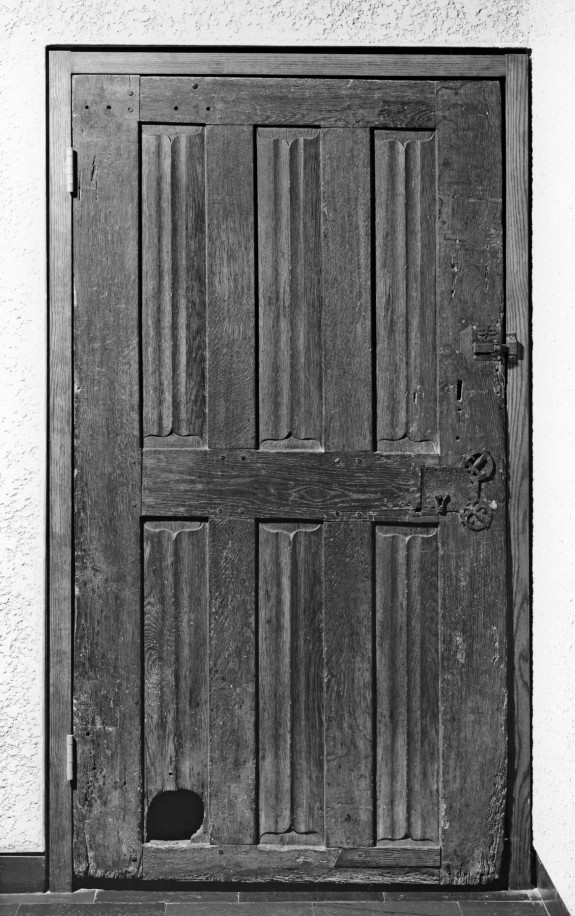 It is also known that in the Exeter cathedral there was not only a cat flap in the door; there was even a “salary” for the cathedral cat! (for all kinds of curiosities like that check out the blog on cats in culture and art: The Great Cat). 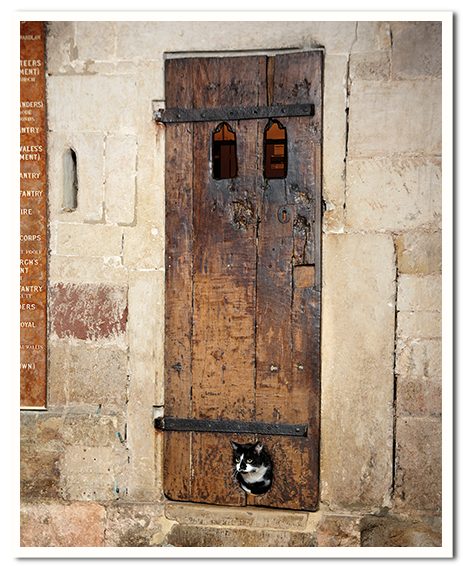 A very interesting source for researching medieval everyday life are the manuscripts Tacuinum Sanitatis, that is a medieval guide on the healthy lifestyle. Among their miniatures depicting production of food we also see making cheese: a cat is guarding it against the rodents.

It is difficult to say what was the role of a cat in medieval depictions of cat and dog fighting – most likely it was a metaphor for combat between good and evil. The trouble is that both cat and dog could have had either positive or negative meaning. However, the medieval bestiaries used to emphasise bad qualities of dogs (their stupidity and impurity), while cats were just usually described as mouse-catchers. 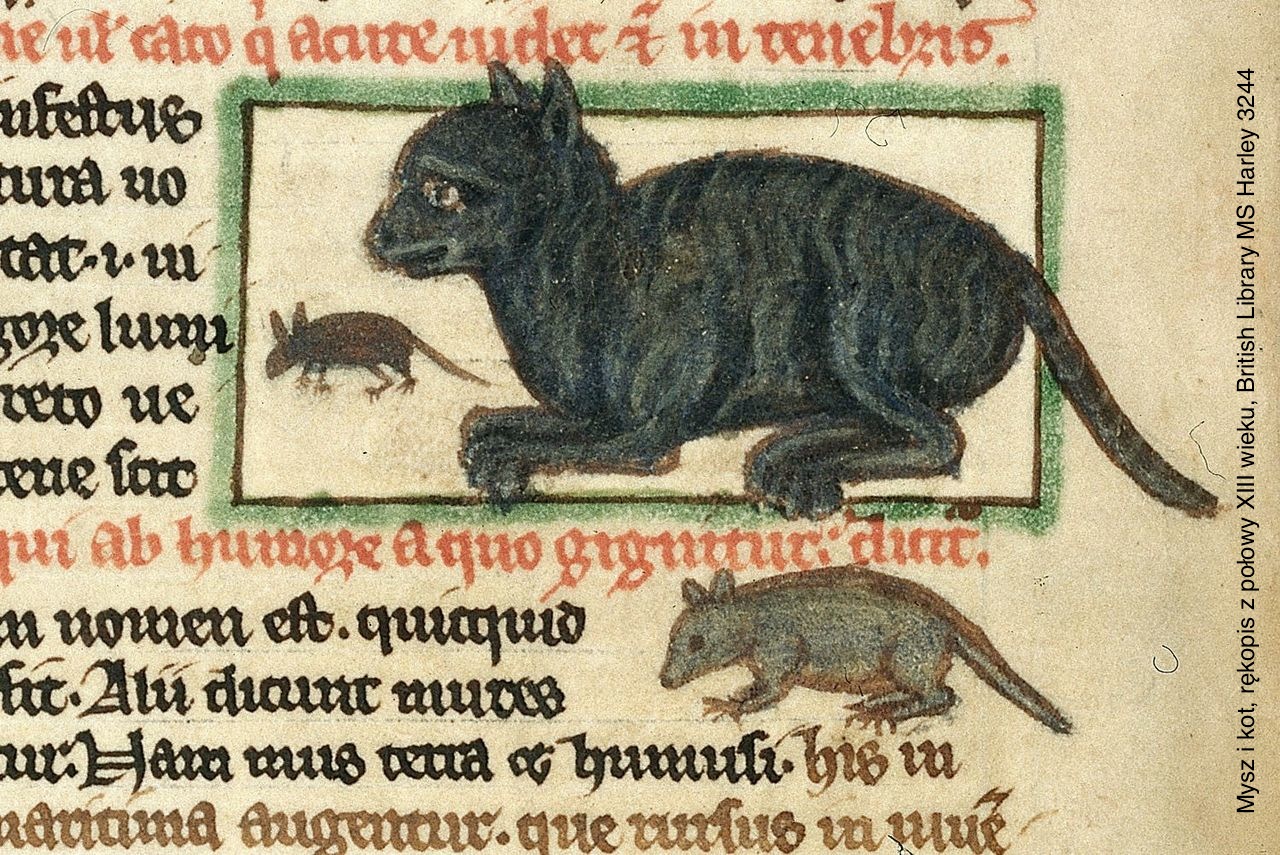 Meanwhile, a mouse could have represented the devil – and so, frequent presence of cats in Annunciation scenes is usually interpreted as a hint that this is the moment when the devil gets tricked: the Virgin has just conceived the Saviour. 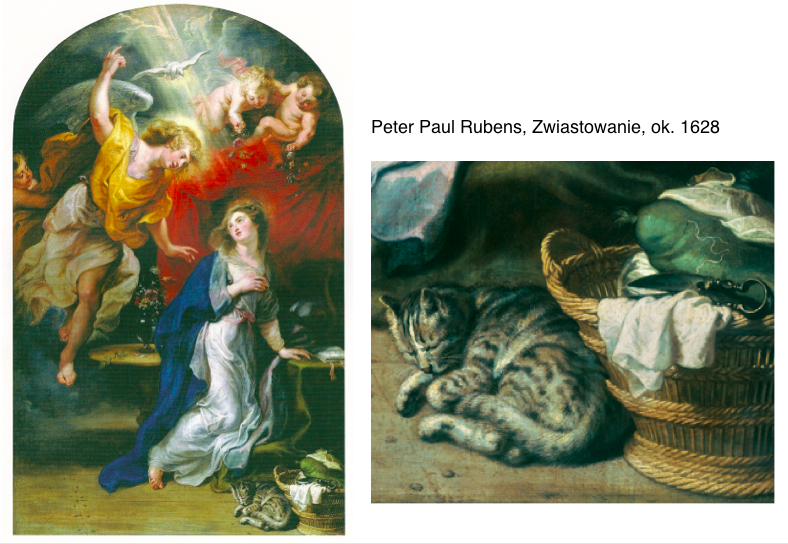 This is also the most popular way of interpreting depictions of St Joseph with a mousetrap: the Virgin’s „husband” was supposed to be a “trap” for the devil. On the other hand, it may also be interpreted in reference to Joseph’s sexual frustration: the mouse could have represented female sexual organs, being out of Joseph’s reach. This would be supported by a 13th century folk tale „De la sorisete des estopes” in which a foolish husband ran after a mouse through the fields because his wife told him that it was her vagina that escaped. No need to say that he did not manage to “catch” it. 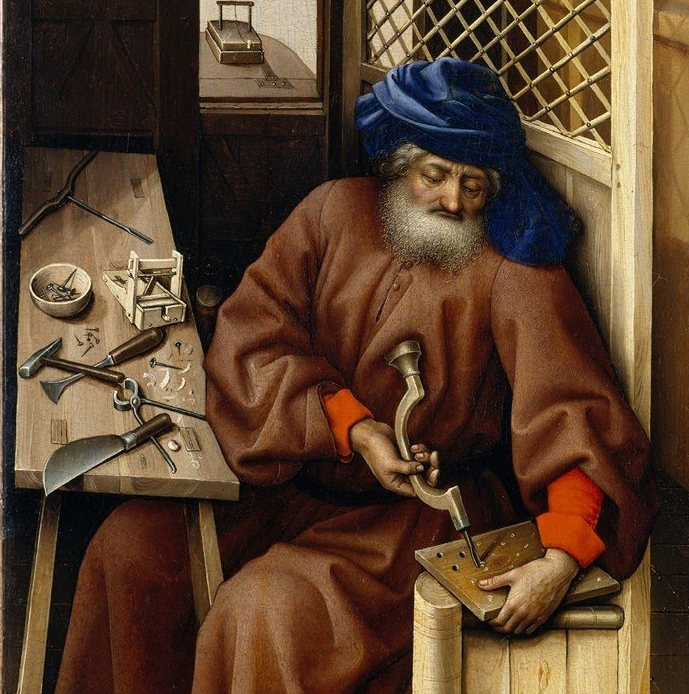 If that was indeed the meaning of a mouse, then perhaps “catching it” was a reference to getting a woman pregnant? In such case a cat in Annunciation could simply indicate that this is the moment when Virgin Mary got knocked up: exactly 9 months after the feast of Annunciation (25th March) we get Christmas. 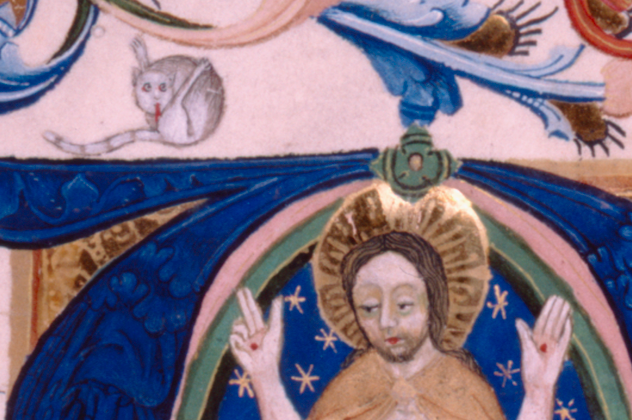