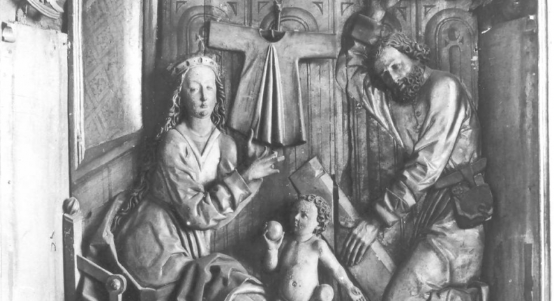 The National Museum in Cracow preserves two pairs of altar-wings, which are the remains of the retable from Lusina. This retable was a pentaptych (altarpiece with two pairs of wings), created in Cracow at the beginning of the 16th century. Some of its panels were painted, but the main opening was decorated with relief, and those sculpted parts of this altarpiece were created by a workshop highly influenced by the art of Veit Stoss. We do not know the original destination for the Altarpiece of Lusina; in the 19th century it was in the chapel of a estate in the village Lusina, near Cracow. It was donated by the owners to the Cracow Scientific Society, the collection of which was later taken over by the Polish Academy of Arts and Sciences, established in 1871. The Altarpiece of Lusina was publicly exhibited for the first time in 1858, and it was photographed on this occasion. That oldest photo of this retable is now available in the service PAUart: 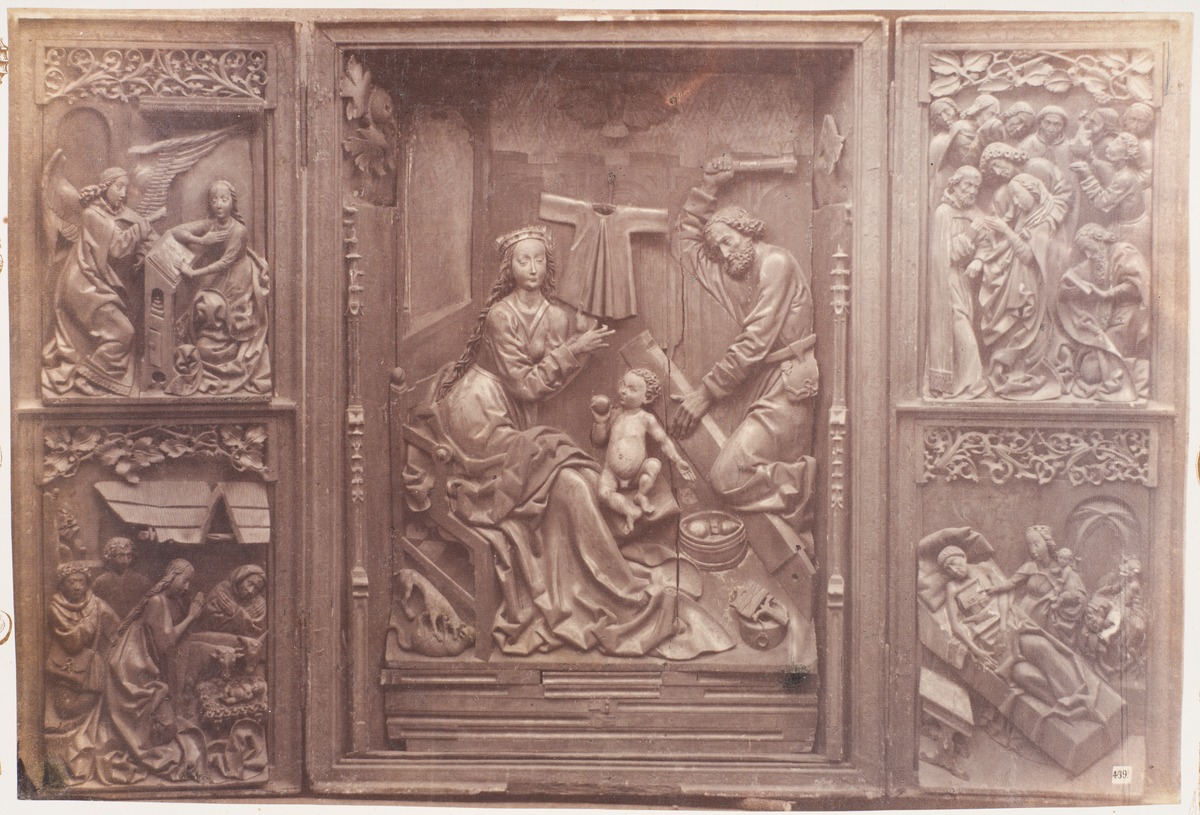 The missing pieces are: the middle part of the retable and one of the sculpted panels of its wings. The middle part was very interesting: it contained a sculpted depiction of the Holy Family, including the Virgin weaving a dress for the Child. According to the legend, that dress miraculously expanded within years and Jesus wore it all his life. The dress was so miraculous that it also never got dirty! The Gospels reads: ” When the soldiers had finished crucifying Jesus they took his clothing and divided it into four shares, one for each soldier. His undergarment was seamless, woven in one piece from neck to hem” (John 19:23). According to the medieval legend, the “seamless undergarment” was the same miraculous dress which Mary wove for Christ when he was a child. The composition of the middle part of the Lusina Altarpiece was surely inspired by a print by Veit Stoss (L6, late 15th c.): 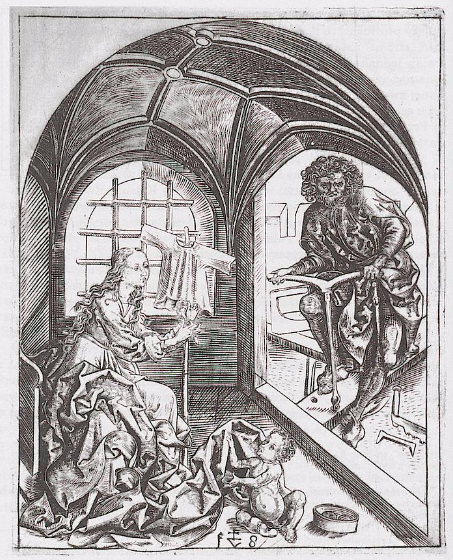 However, an anonymous author of the Altarpiece of Lusina added some details that were not originally included in Stoss’ print. One of them is a motif of fighting cat and dog, depicted in the lower left corner of the relief. Fighting animals were popular motif in medieval art; we may find another example of a combat of cat and dog in the choir decoration of the Cathedral in Prague. 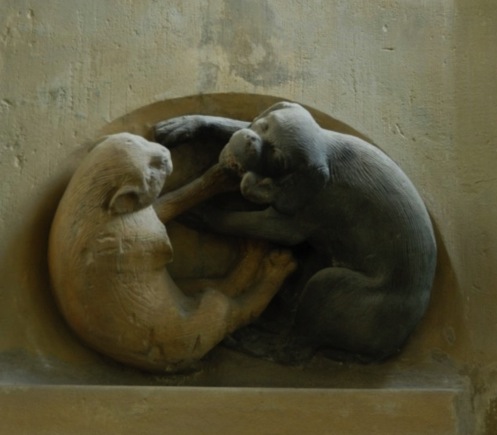 Most likely the depiction of fighting cat and dog bears a symbolic meaning; fighting animals are, in most cases, understood as a depiction of evil. Perhaps in this case it was supposed to be a battle between Good and Evil; the question is, which animal would represent Good, and which would be Evil? Well, the symbolic meaning of both cat and dog in medieval art is unfortunately ambiguous.

Obviously, a dog may have a very positive meaning: it often impersonates fidelity, for example in the so called Arnolfini Portrait by Jan van Eyck (I have written about it before, see HERE). Dogs were also popular in the Dominicans’ iconography, as latin Domini-canes was translated as dogs of the Lord. Cat, on the other hand, as an animal active in the nighttime, could refer to Evil; after all, cats are commonly known as attributes of witches. However, when we check out medieval bestiaries (that is: the books describing animals), we will discover that the symbolic meaning of cat and dog may actually be the other way round. A dog may have impersonated the devil; it was popular to decorate medieval manuscripts with a scene of a dog chasing a rabbit, which is usually understood as a depiction of the devil chasing human’s soul. The bestiaries say that dog may be quite stupid: when it approaches a river while holding meat in its mouth, if it sees its own reflection it will drop the meat it is carrying, trying to get the meat it sees in the reflection. That symbolises foolish people, who loose their souls while pursuing desires. 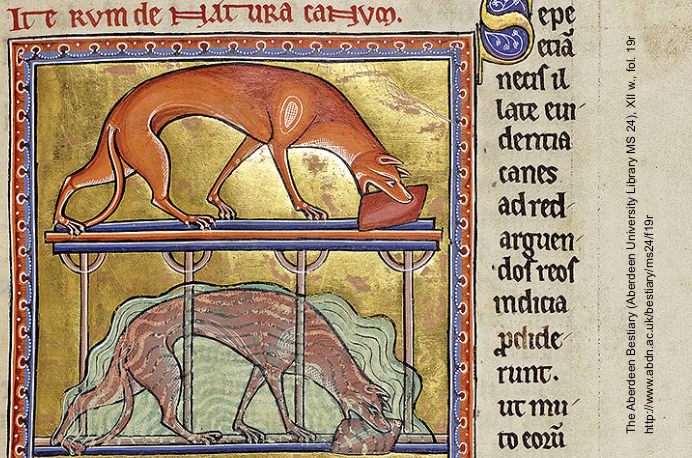 On the other hand, cats, however mysterious and unpredictable, were rather respected in the Middle Ages, as the useful animals, exterminating rodents. Mice, being a threat for household’s reserves, were understood as symbolising the devil, and therefore cats became devil’s enemies. That is why a cat (as devil’s enemy) sometimes was included in the depictions of Annunciation: the Annunciation is a moment of Incarnation, and as so, it is also a moment of the devil’s defeat. That also corresponds with the image of the Holy Family: the childhood of Christ prefigures his future Passion and the devil’s failure. In case of this Holy Family image, the scholars pointed out that the dress is exposed in a way that may refer to the cross. Also, the legend about the miraculous dress of Christ leads us eventually to his Crucifixion, as this was supposed to be the “seamless undergarment” mentioned by the Gospels. 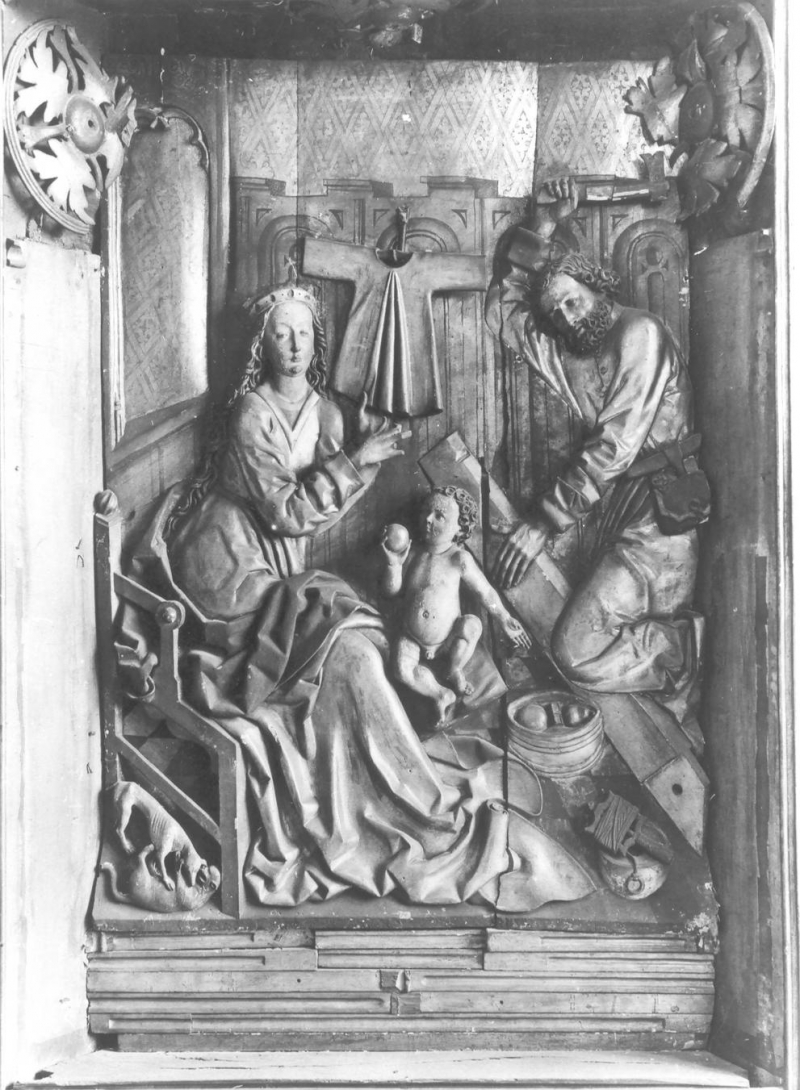 I have written earlier about the presence of a cat in some images of Annunciation: that was in a post dedicated to St Joseph from the Mérode Triptych. It may be worth pointing out that there is a mutual motif in the Mérode Triptych and Veit Stoss’ print: in both cases St Joseph is depicted drilling wholes in a piece of wood. To read about this motif please go back to THAT POST. This part of the composition was changed by the unknown author of the Altarpiece of Lusina, and St Joseph was depicted there with an axe (which, by the way, did not come off very well, as it may seem that he tries to hit Jesus with that axe!).

And finally, let’s take a look at one more detail of the lost Lusina relief: in the 1858 photo it is clearly visible that there used to be a Dove (the Holy Spirit) above the Holy Family. Interestingly, in a later photo, published by the service Looted Art (that photo, as far as I know, was taken in the early 1940s, after the Altarpiece was taken over) is missing the Holy Spirit!

It seems that the Holy Spirit was lost; but we should never lose our spirit in hopes of recovering this war loss some day.