Let’s not drink too much wine

Every year around New Year’s Eve in my social media certain late-medieval miniatures goes viral: they depict a young man who most likely drank too much alcohol. However popular the depiction may be, most of people sharing and forwarding this image have no idea where it comes from. It is in fact one of the illustrations from Tacuinum Sanitatis: a book on healthy and harmful qualities of various food products as well as certain aspects of life. The source for Tacuinum Sanitatis was an Arab medical treatise Taqwin al‑sihha (تقوين الصحة, “Tables of Health”), written around. 1050 by Ibn Butlan of Baghdad. It was translated into latin probably in mid-thirteenth century in Palermo or Naples. Three most famous illuminated manuscripts, created in Lombardy at the end of the 14th century, are today in Vienna, Paris and Rome. 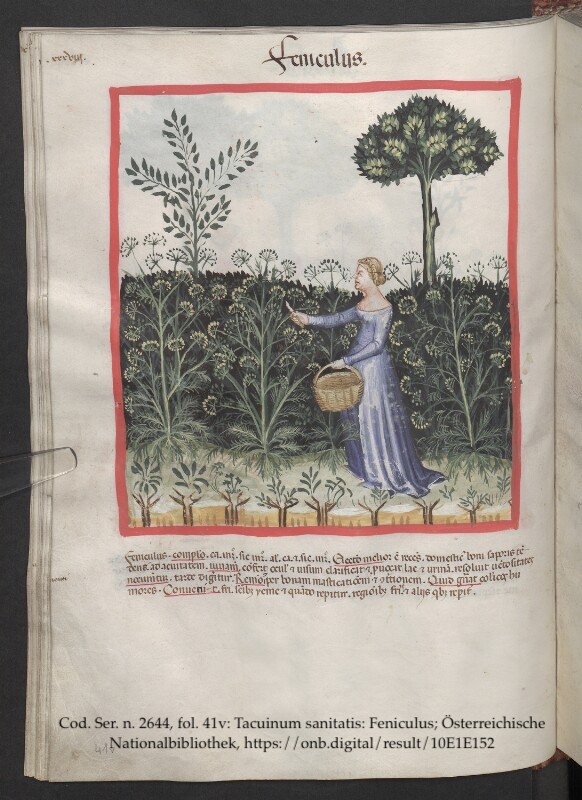 It may be called a medieval guide to healthy lifestyle; it contains quite a lot surprisingly reasonable advices. Among most important aspects of healthy lifestyle it recommends: food and drink in moderate proportions and of proper kind, fresh air, balance between activity and rest, as well as between sleeping and staying awake. It has been stressed that one’s body is much influenced by the condition of one’s mind, and the illness is a result of braking the balance of aforementioned elements. And as it is important for the well-being of body to keep the mind relaxed, among beneficial activities there has even been listed… storytelling! 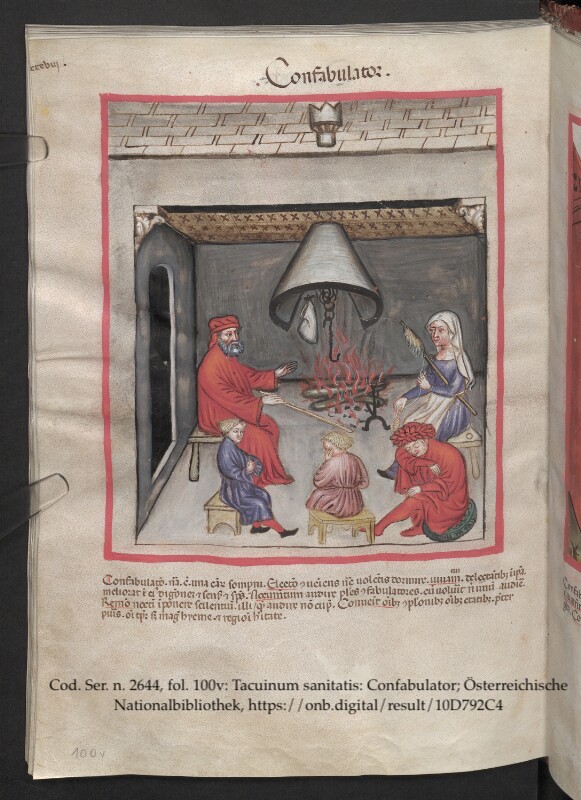 Apart from that, a crucial theory of this text is humourism, rooted in Ancient medicine, credited to Hippocrates (Greek physician living at the turn of 5th and 4th centuries BC). It assumed that there are four fluids in human body, and domination of one or another results in certain temperament: choleric (too much yellow bile), sanguine (too much blood), phlegmatic (too much phlegm) or melancholic (too much black bile). Each of the temperaments resulted in tendencies towards certain diseases. Also the temperaments were juxtaposed with four elements: the fire was of choleric nature (and described as hot and dry), the air – sanguine (hot and humid), the water – phlegmatic (cold and humid), and the Earth – melancholic (cold and dry).

Tacuinum Sanitatis provides information which products are recommended for particular temperaments, as well as for certain seasons. So there are ingredients described as hot and dry (hence useful during winter, which is cold and humid), such as dill, beetroots, cabbage and celeries. Ingredients cold and humid (hence perfect for hot and dry summer) were cherries, oranges, watermelons and pumpkins. Among hot and humid ingredients (recommended for cold and dry autumn) we may find wheat, olive oil, or pasta; and finally, the cold and dry ones (to be eaten during warm and humid spring) were for example groats or acorns.

Each of the products, fruits and vegetables, or aspects of healthy life has been illustrated with a separate miniature. Below the images there are captions deriving from the tables: each thing being described in terms of its nature, optimal state, benefits, potential dangers, as well as recommended remedy. Additionally, it provided information about the effects of use, as well as to whom particular item or activity is recommended. 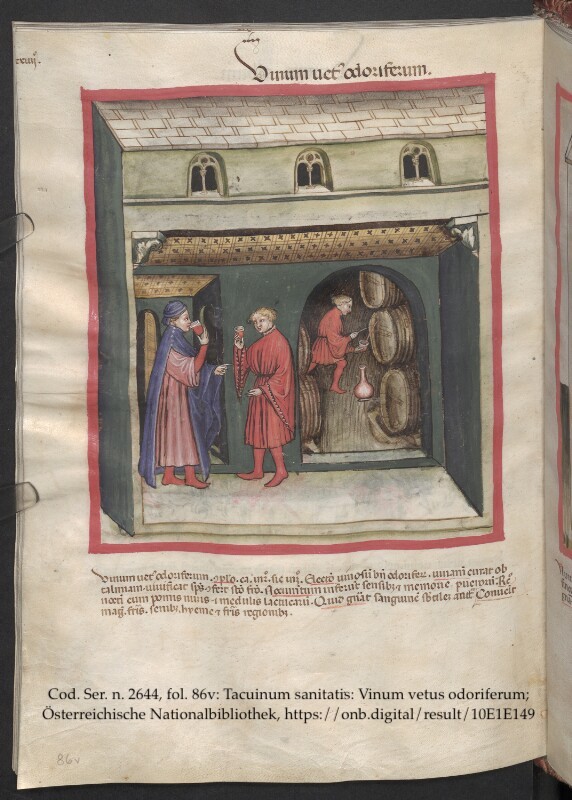 Let’s take a look at the example of a red wine: its nature is hot and dry, its optimum state is when clear, its benefit is supporting digesting, and it may be harmful for weak liver and spleen. As a remedy for harmful effects of wine are listed sour pomegranates. The effect of wine is bile, and finally it has been said that red wine is recommended to cold temperaments (i.e. phlegmatic and melancholic), to elderly, during winter, and in cold climate.

By the way, there are several kinds of wines described in those manuscripts: light white wines had very different qualities than heavy red ones. The latter were supposed to be unsuitable for children… and also it has been noted that the negative effect of wine overuse was diminishing of sexual drive.

Sexual intercourse was in fact a separate aspect of heath in those treatises: recommended mainly for young people, of hot and humid temperament (sanguine), during spring, in the afternoon and in temperate climate. Its purpose is not only reproduction, but also calming the senses. Its optimum described as with complete ejaculation, and when one is neither full nor hungry, but after digestion or after expelling excrements and urine. It is not recommended to the impotent.

And what about the miniatures presenting vomiting? Well, that action is described as beneficial for an overstuffed stomach, but it can be bad for the brain. Also, vomiting has been listed as a remedy for drunkenness (along with nourishing food). 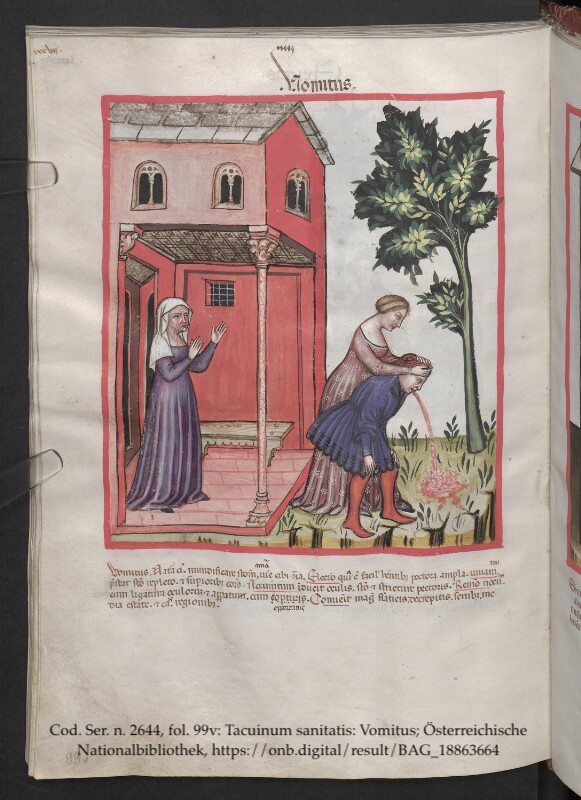 So, once again: everything already happened in the Middle Ages. Wine is fine, as long as we don’t drink too much of it. We should not get ourselves to the point of returning our last meal, or – even worse – to the point of loosing sexual drive. As long as we are not impotent, coytus seems to be much healthier way to enjoy living and to achieve inner balance necessary for well-being. And I wish you (and myself) plenty of that, not only in this New Year. 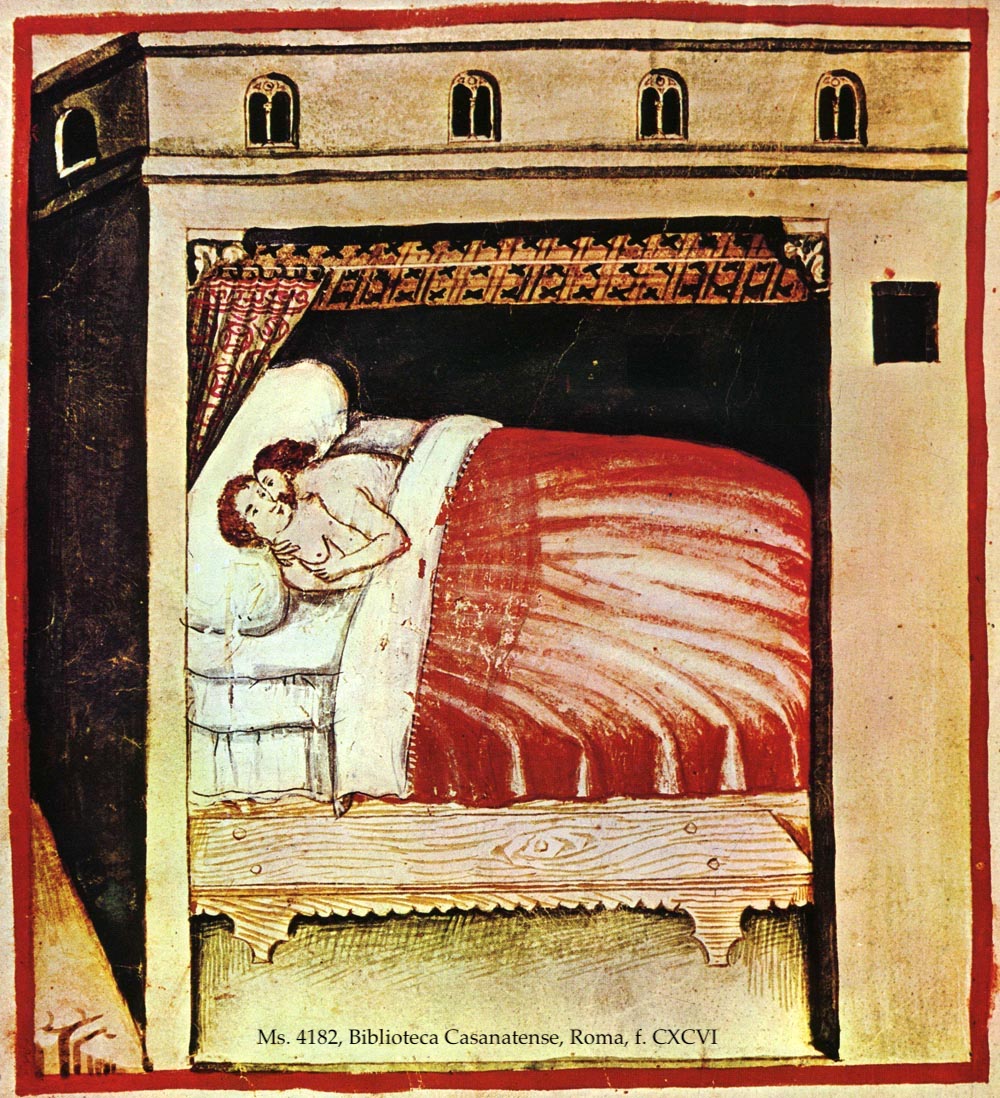