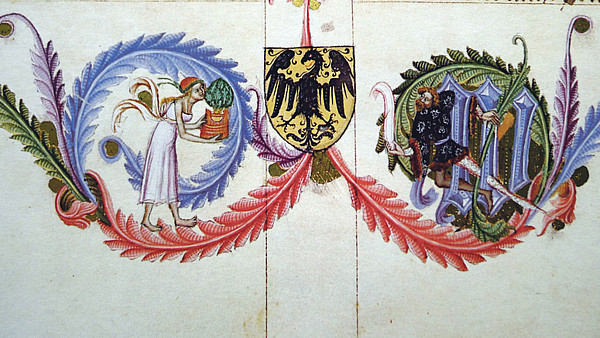 Medieval literature and art show us that the lovers’ gift back then was not so much a bunch of flowers, but rather a wreath: a ring made of flowers and ribbons. Such a love symbol is mentioned in the 13th-century Roman de la Rose, and we may also see it in one of the miniatures of 14th-century Manesse Codex (1304-40, Heidelberg, University of Heidelberg Library, Codex Palatinus Germanicus 848), which is a book of German medieval vernacular poetry. 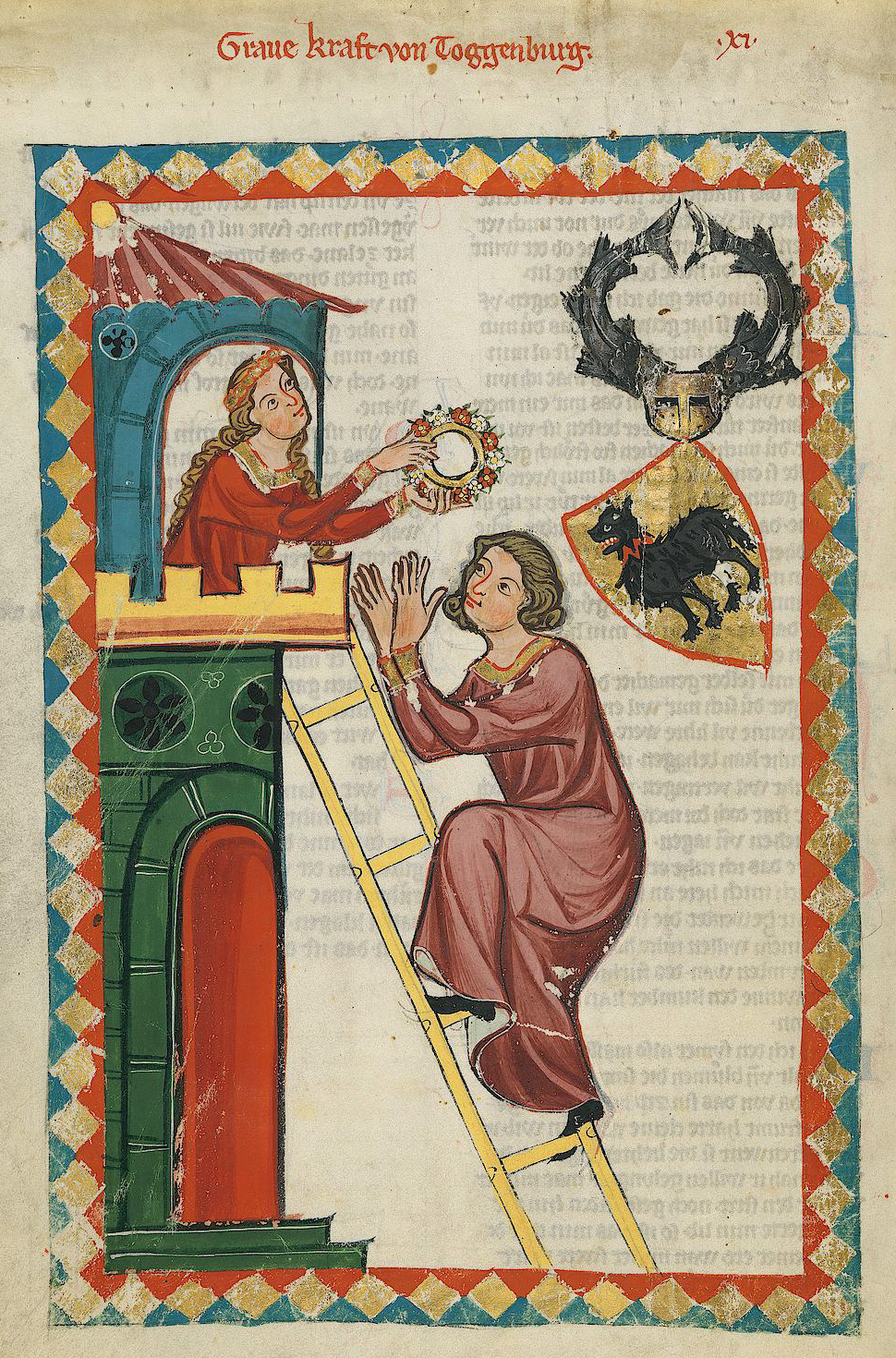 It is not only about a wreath; the love symbolics in medieval courtly culture may also have been disguised in various forms of ties and knots made of fabrics, especially of a female veil. The “love knot” appeared in Geoffrey Chaucer’s Canterbury Tales, however the idea is most likely based in ancient traditions. A round form resembling wreath bud made of cloth is a figure of one of the oldest Polish coats of arms (called Nałęcz). Most of all, however, such a knot with a kingfisher inside was a personal emblem of Bohemian king Wenceslaus IV Luxembourg.

That emblem appeared on the king’s foundations, and one of the best examples is his Bible: a very richly decorated yet unfinished manuscript, today in the Austrian National Library in Vienna (divided into 6 volumes, Cods 2759-2764). It has 1214 parchment folios and originally probably around 1200 miniatures were planned, although only 654 had eventually been executed. It is one of the finest examples of Prague illumination of the end of the 14th century. 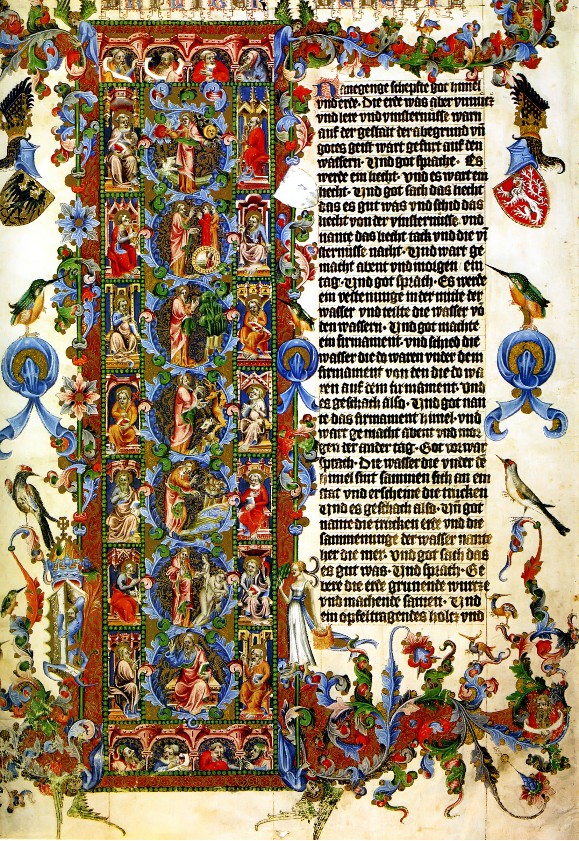 Especially interesting part of this manuscript is its marginal decoration: it contains not only a knot with a kingfisher, but also multiple images of female bath attendants. 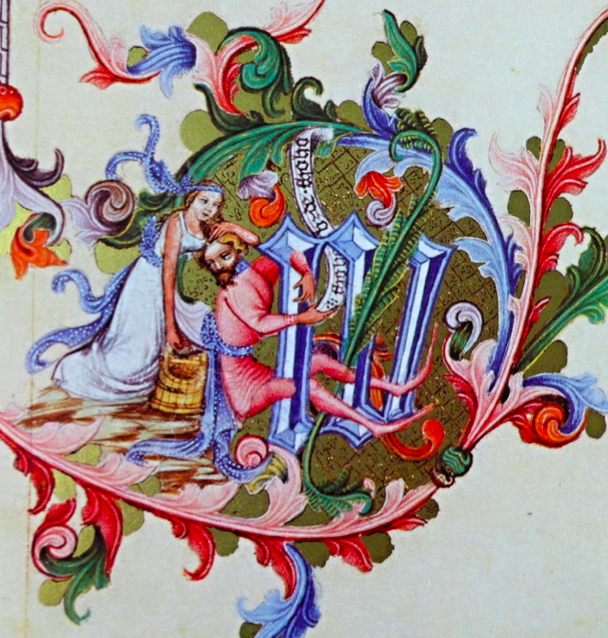 On one of the folios we may spot a bearded man touched by such an attendant, while he is wrapped around a huge letter “W” (the motif of that letter repeats in this manuscript); most likely it is king Wenceslaus himself. Possibly the same man – but naked – is depicted in another page, taking massage from two ladies! White dresses of those bath attendants are wearing are in fact undershirts, and in some cases they reveal more than they cover. 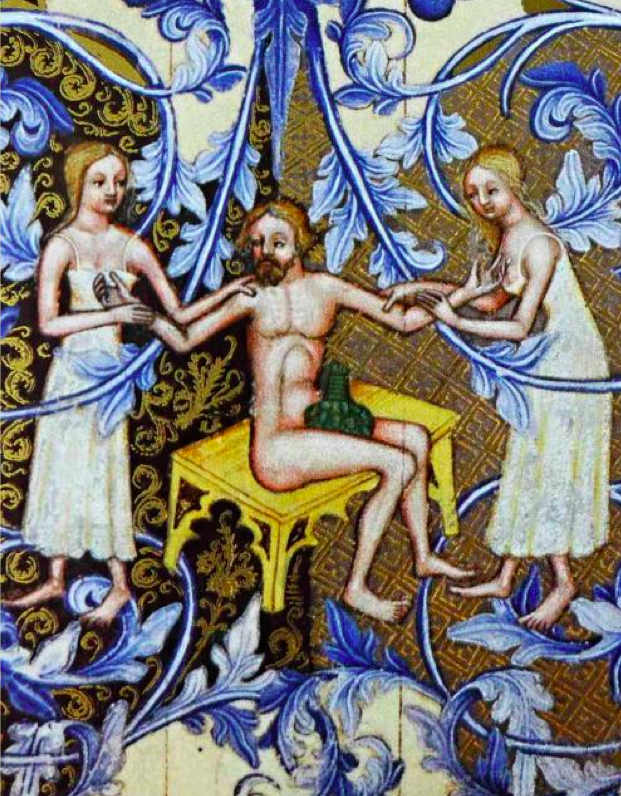 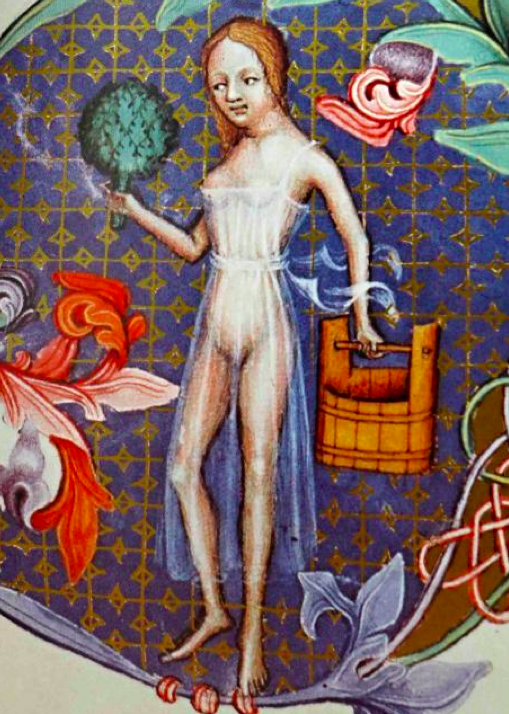 I have once written about medieval bath-houses and what kind of indecent places they may have been (post available HERE), and apparently king Wenceslaus IV was especially interested in female company. A 16th-century chronicler Václav Hájek of Libočany wrote about the legendary affair between the king and beautiful Susanne, who was in fact a bath attendant. Wenceslaus IV was said to had been once imprisoned by his enemies, but managed to escape with the aid of that particular bath attendant and afterwards – as a thank you – he invited Susanne for a dinner&breakfast date. Later built a new bath-house in Prague and made Susanne its manager. 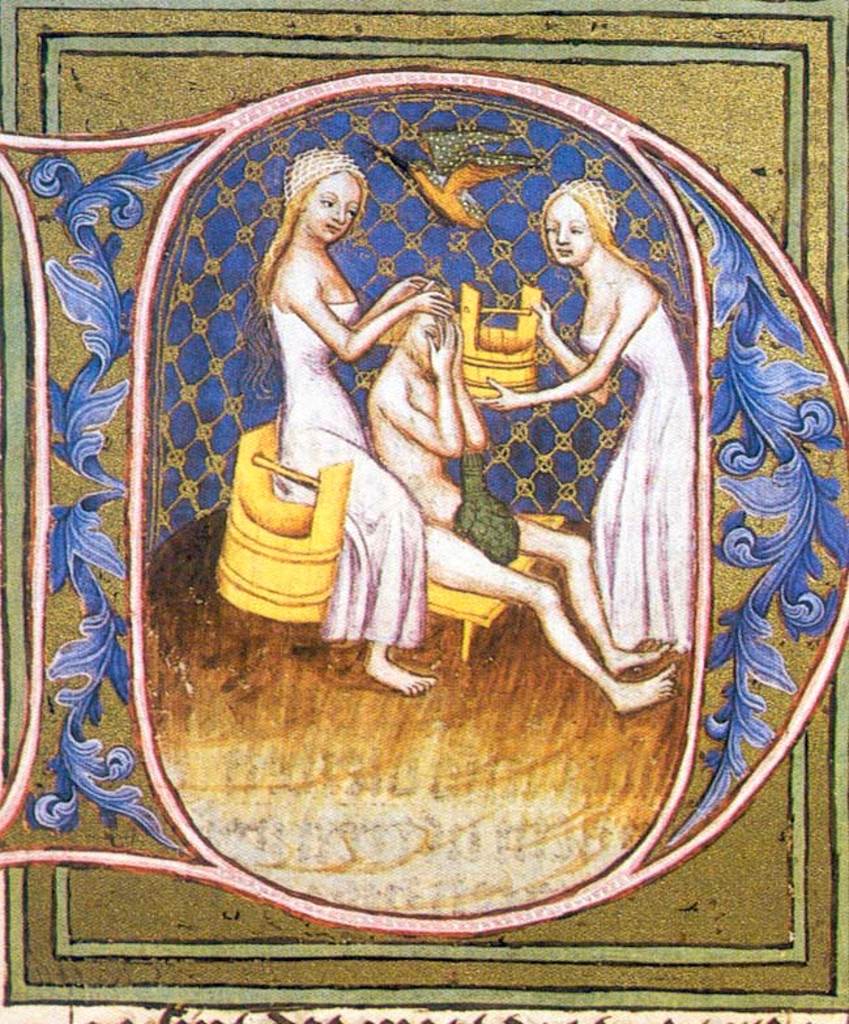 Anyway, as the manuscript has never been completed, it seems that Wenceslaus miscalculated this commission and probably run out of money before it had been done. Perhaps he spent too much on some particular services delivered by those beautiful bath attendants.