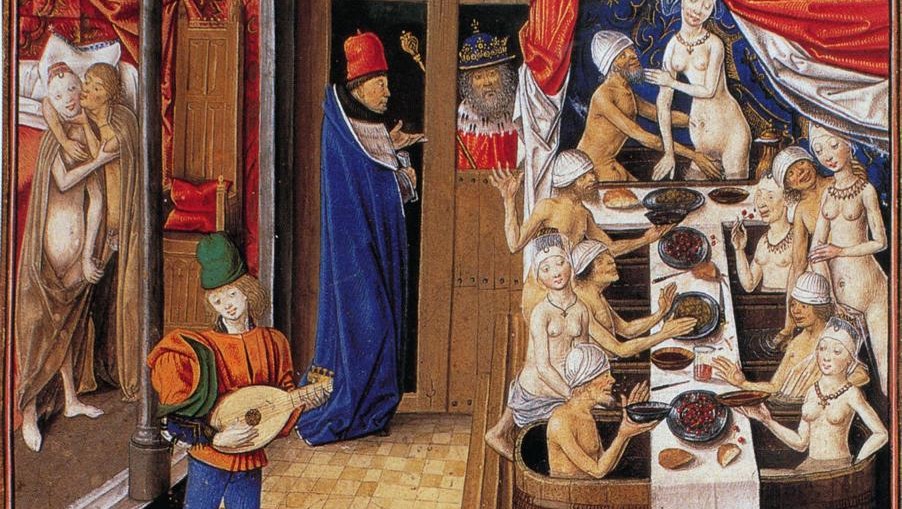 There is a netherlandish illuminated manuscript, which dates back to ca 1470 and is kept in Staatsbibliothek in Berlin. It was lavishly decorated for Anthony, The Great Bastard of Burgundy, who was a natural son of Philip III, Duke of Burgundy. There is a very interesting miniature on folio 244 of this book – it shows the interior of a bathhouse, where men and women are feasting in the tubes together. They eat and drink wine, there is a musician that provides “live” concert, an in the other room we can see a big bed waiting for those who would like to get closer to each other. Surprisingly, there are more of such images in medieval art.

The manuscript I’ve mentioned was decorated by an unknown artist, called “Master of Anthony of Burgundy”. The text is actually ancient – it is Factorum et dictorum memorabilium libri novem, a 9-volume book about famous people of Ancient Rome, written by Valerius Maximus in the first half of the 1st century AD. There is a story in 9th volume that refers to a famous roman engineer, Caius Sergius Orata, who made a fortune on some inventions, like hypocaustum – roman underfloor heating system, used also in bathhouses. The text also says that Hannibal’s troops engaged in excessive eating, drinking, and fornication with prostitutes in roman bathhouses and thus became weak and lax. At first we could assume that the miniature shows ancient bathhouse – but in fact it actually shows the reality of 15th century Europe! 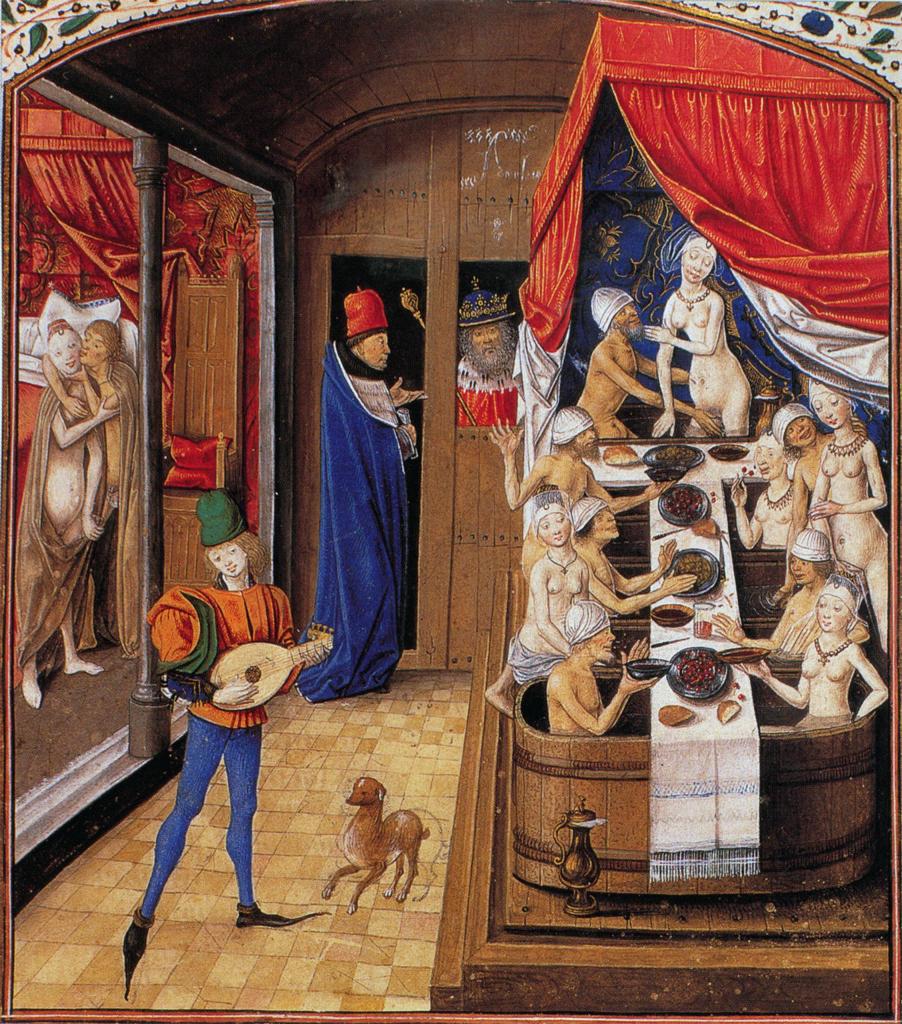 Many people falsely assume that Middle Ages was the time of darkness and dirt – they just think that people didn’t wash themselves back then. Of course, that is not truth. In fact, the hygiene was often much better in Middle Ages than later! For example – French court of 16th, 17th and 18th century was famous for stinking… there were almost no toilettes in Versailles and people just used fireplaces in the chambers. Mary Antoinette wrote in her letters in 18th century that the whole palace smelled with urine. Actually the ladies used to carry little golden hammers in their purses in case any fleas came from under their dresses… in 19th century, on the other hand, it was often assumed that undressing is such an obscene act that it was recommended to take a bath in the shirt. Suddenly we can see that comparing to this Middle Ages seem to be an age of clean people! 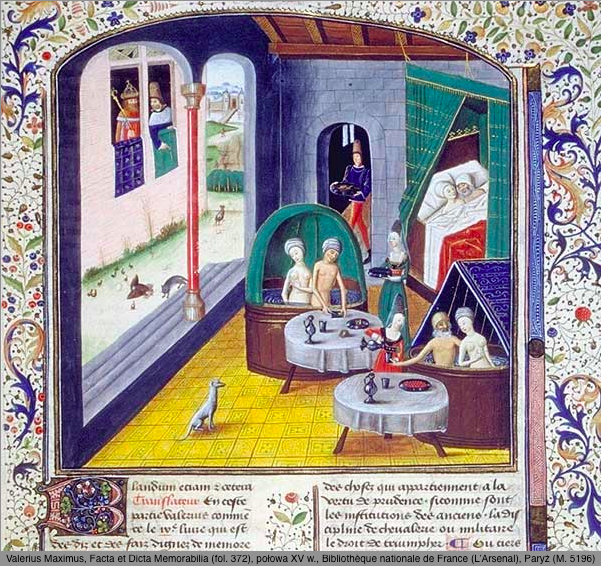 Of course, we don’t talk about everyday bath – that would be too much. Polish king on 14/15th century, Władyslaw Jagiełło, used to bath every day – but we know that other people considered it odd. Taking a bath was a way to spend some good time, and also it was considered good for health. Medieval medical books contained many bathing prescriptions to use in specific conditions, like old age, pregnancy and particular illnesses.

Of course, there were some voices (especially on behalf of the Church) that condemned bathing – saint Bernard of Clairvaux, for example, preached that christian knight should avoid taking baths. That meant above all not being vain and not care too much for the body, and also avoiding the temptations linked with bathing. Because you must know that in Middle Ages people bathed in large groups, often coeducational.

Group baths were very popular at the court of Charlemagne – he suffered from rheumatism and it was very good for him to spent time in hot tubs. It is not a coincidence that he decided to build a palace in Aachen – one of the biggest part of that palace was a bathhouse using thermal hot water from the ground. Bathhouses existed there even earlier, in roman times – latin name of the village, Aquisgranum, comes form the word “aquae” (lat. waters) and Grannus, which is a name of an ancient god of baths. As Einhard wrote, Charlemagne “would invite not only his sons to bathe with him, but his nobles and friends as well, and occasionally even a crowd of attendants and bodyguards, so that sometimes a hundred men or more would be in the water together.” 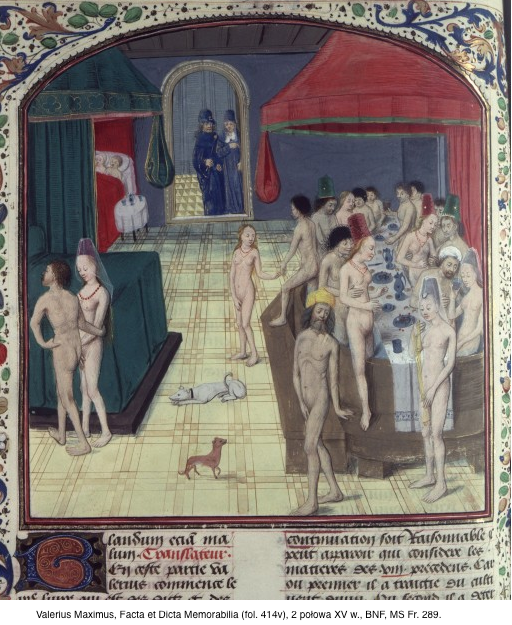 Of course, only few people could afford a private bath – most of them used public bathhouses. In 13th century Paris there were over 30 such places! They was often built near the bakeries, to use baker ovens to heat the water.

Most of the depictions of medieval baths come form 15th century – we know that such places were very popular in the cities back then. Men and women dined there and had sex… it was a bit like a date: first dinner, then love-making – although everybody’s naked already during eating, and the bed waits in the other room, there’s not even “walking home” part needed. Obviously there were the prostitutes hired in such bathhouses – that was officially forbidden, but no-one cared. Sometimes the bathhouses were actually the parts of the brothels.

It seems that those bathhouses went bankrupt in the beginning of the 16th century due to a sudden syphilis plague in Europe. Erasmus of Rotterdam wrote in 1526 that 25 years earlier nothing was as fashionable in Brabance as spending time in public bathhouses, and now they are all closed due to the plague. We don’t know exactly where the disease came from – italian medic, Girolamo Fracastoro, wrote that it was called “French disease” in Italy and Germany, and “Italian disease” in France; it was also known as “Spanish disease” in Netherlands and as “Polish disease” in Russia. It’s always a fault of the neighbor.

At the end, as we have a Valentine’s Day today, I wish you all a great medieval style date: an evening together is the best when we we start it with a joined bath with snacks and a bottle of wine! 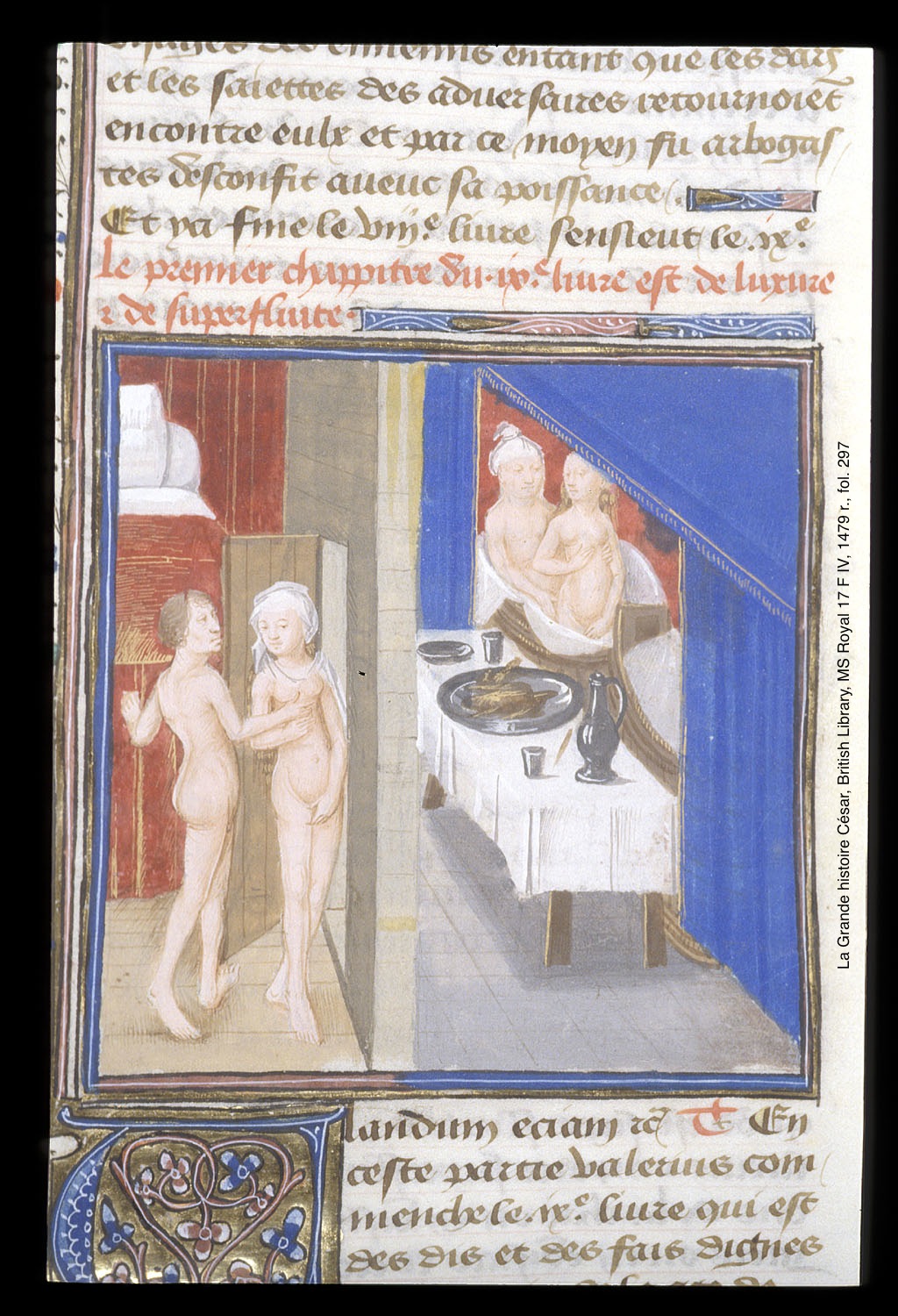 You will find more on the subject of hygiene in the past in the book by Virginia Smith “Clean: A History of Personal Hygiene and Purity” (Oxford University Press, USA, 2008).