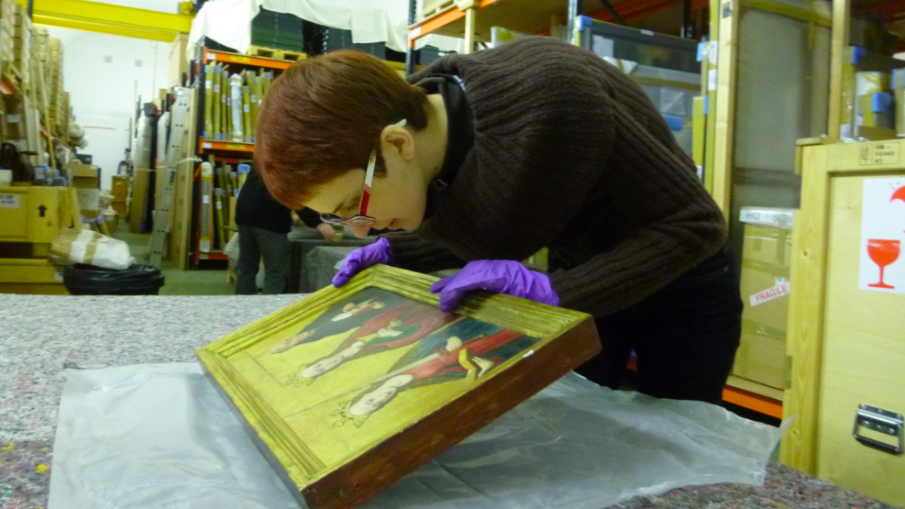 In my previous post I started a story about late-gothic panels from York, which used to be predella-wings of some Nuremberg altarpiece, created in the workshop of Hans Pleydenwurff. Before your read this post, you may want to get back to the previous one, especially on the subject of the panels’ iconography (available HERE).

Robert Suckale proposed that the panels from York should be considered predella-wings of the altarpiece of St Catherine of Siena, from the Dominican Nuns’ church in Nuremberg. That retable have not survived, but its wings did – most of the panels are now in the Germanishes Nationalmuseum in Nuremberg. The curators of that collection also agreed that the York panels may come from the same retable – that has been published in their recent catalogue of 2019.

As it happens, I disagree. 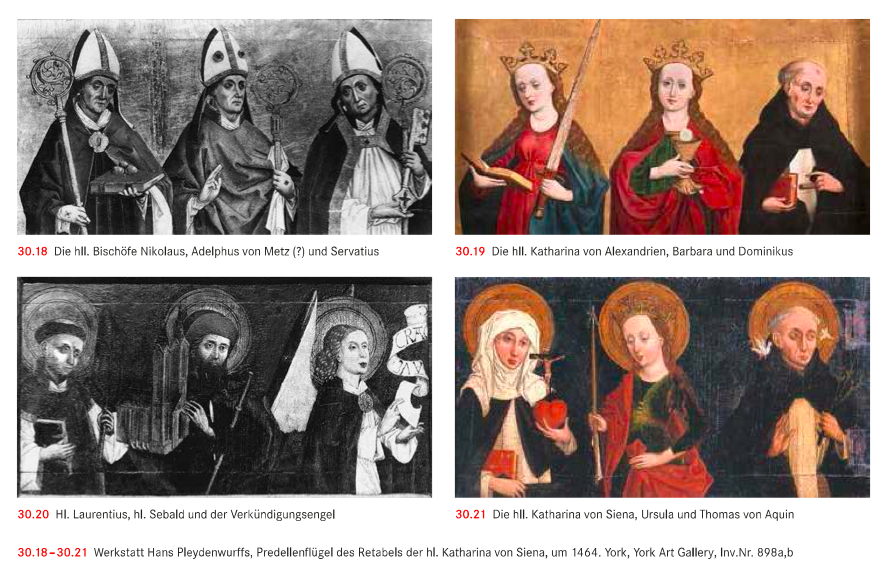 Let’s start from a short explaination: gothic retables may have had wings not only by a shrine, but also, sometimes, by the lower part called predella. Predellas may have contained reliques, presented or hidden by opening and closing lower structure. Predellas could also have just been decorated with paintings or sculptures, and the attached wings enabled changing their display according to the liturgical calendar. As it happens, we still have sacristan’s rule books for the Parish Churches St Sebald (c.1482), and St Lawrence (1493) in Nuremberg. They read that the wings of the altarpieces were to be opened only on specific feast days, so in fact just a few days every year. Occasionally, only the predella-wings were opened. For example, the Altarpiece of the Apostles was supposed to be fully opened (both shrine and predella) on Apostles feasts, although if a feast was during Lent (when the retables should have remained closed) only the predella should have been opened. A retable with predella-wings looked like this: 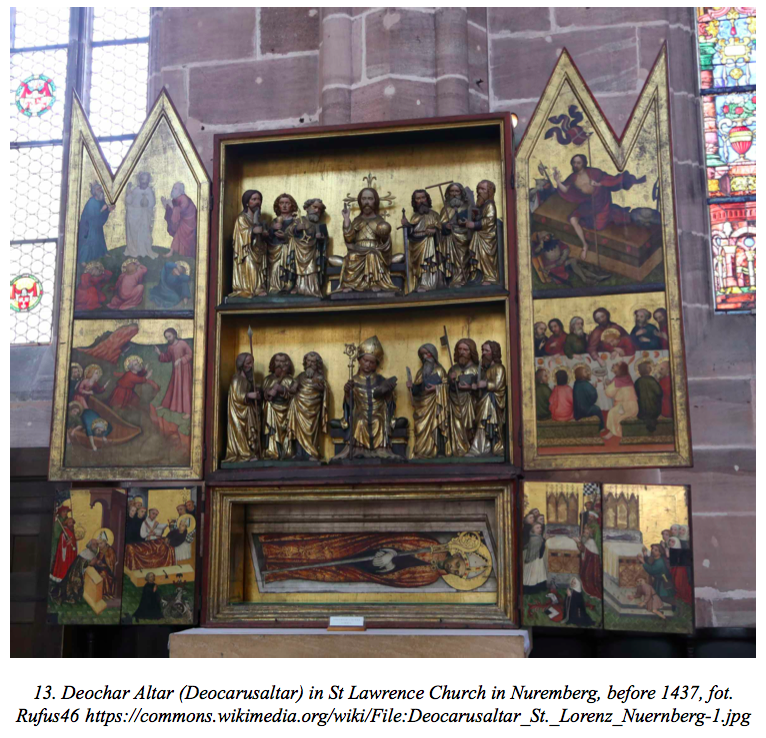 Indeed it seems that the panels from York have been predella-wings: it is indicated by their shape, the fact that they have been made of small wooden pieces, and the fact that they are painted on both sides. There is a “festive” side with golden background, and an “everyday” side with dark background. The trouble is, there is no way we can juxtapose them together, as one of them contains the depiction of Archangel Gabriel, but the other lacks Virgin Mary completing the scene of Annunciation. If we assume that this pair of wings came from one altar, then closing predella would pose Archangel Gabriel as greeting St Catherine, who actually turns away. That really does not make any sense.

Alternatively, if we set the wings the other way round, the Archangel would greet space outside the retable. That does not make sense either.

Robert Suckale proposed that Virgin Mary completing Annunciation scene was in the central (now lost) part of predella. That assumption means that Archangel Gabriel would have been placed in the inner side of predella-wings, visible in an opening. It was probably because professor Suckale did not see the York panels in colour – he must have missed the fact that the other side had golden background. There is no possibility that dark background decorated inner side of retable wings while the other side was adorned with gold. Besides, it either way does not fit survived descriptions of St Catherine of Siena’s retable.

Dominican’s churches in Nuremberg (one Nuns’ and the other of male convent) have been taken over by the Lutherans during Reformation. The Nuns’ church has been destroyed in 1945; only ruins remain today, while the church of male convent has been dissolved in the early 19th century. All we have left are descriptions of the churches’ furnishing, published in the 18th century (do you have any idea how difficult it is to go through such an old-German print? I hoped to find something useful in the descriptions of other altars, so I read all of that. I found nothing.) The altarpiece of St Catherine of Siena is described rather shortly: apparently it contained sculpted figure of the main patron in the shrine (accompanied by two other saints), painted figures of saints in the wings (including Sebald and Lawrence between two bishops) and eight saints in half-figures in predella, nicely painted. 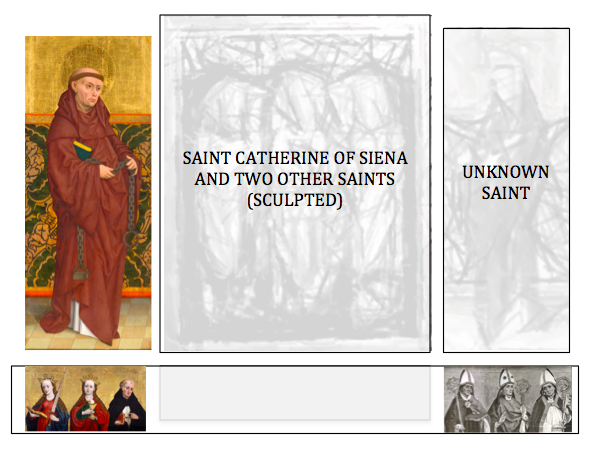 And there is something more: the 15th century list of relics assigned to this altar records the remains of St Catherine of Siena, St Leonard, St Sebald, St Lawrence, St Anthony, St Adolphus of Metz, St Catherine of Alexandria, St Servatius, 11 Thousand Virgins, St Cosmas, St Damian, St Fabian, St Erasmus, St Jerome, St Martin and St Vincent Ferrer. Of those, in the main wings we may find St Leonard, St Sebald, St Lawrence, St Anthony, St Adolphus of Metz and St Sebastian. Let’s assume that the shrine contained Saints Catherine of Alexandria and Vincent Ferrer, accompanying St Catherine of Siena, and there was also one more bishop on the wing: perhaps St Servatius. The rest could have been depicted in predella; to make it eight, it should contain the images of Cosmas and Damian, Fabian, Erasmus, Jerome, Martin and perhaps two of 11 Thousand Virgins. Such a reconstruction makes sense, but does not fit at all the iconography of the panels in York. Additionally, if we assume that those panels belonged to the discussed St Catherine of Siena altarpiece, then not only the depictions of saints would not match the altar’s relics, but also some of the saints would unnecessarily occur in the altarpiece twice: in the wings and in predella.

So now I propose two hypothesis: first of all, the panels from York DO NOT come from Nuremberg altarpiece of St Catherine of Siena. Second of all: I even think that originally they did not form one set together! That’s right: I think those two panels come from two different sets of predella-wings. I believe they both used to be left wings.

Today two panels from York may seem to be one set, but that is probably due to the fact that they both have been framed in identical frames. However, those frames are not original; one of the panels have hinge marks under the present frame. That means that at some point this panel was attached directly to something (without a frame; that hinges also were, in my opinion, unoriginal, but that is a different issue), while the other panel did not have those marks. It proves that both panels have been reframed later. 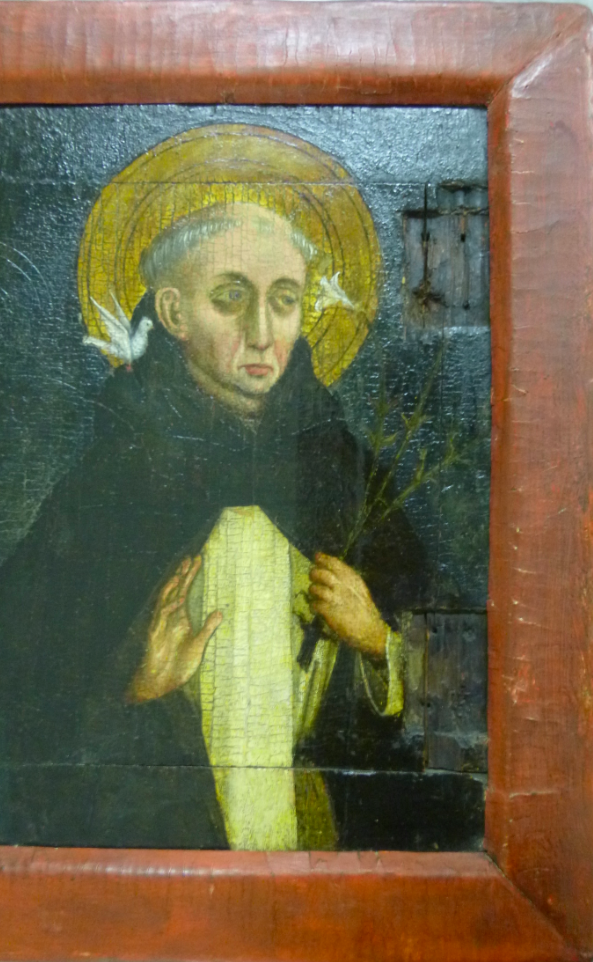 Analysing compositions of both panels, especially on the dark-background side, leads to another conclusion: in one of them all the figures fit in the cadre, while in the other the outer figures seem to have been cut on their sides (St Lawrence and Archangel Gabriel). So in fact it looks like originally the panels have not even been of the same size. Most likely they have been cut and framed to be sold as an ensemble, probably around the beginning of the 20th century. 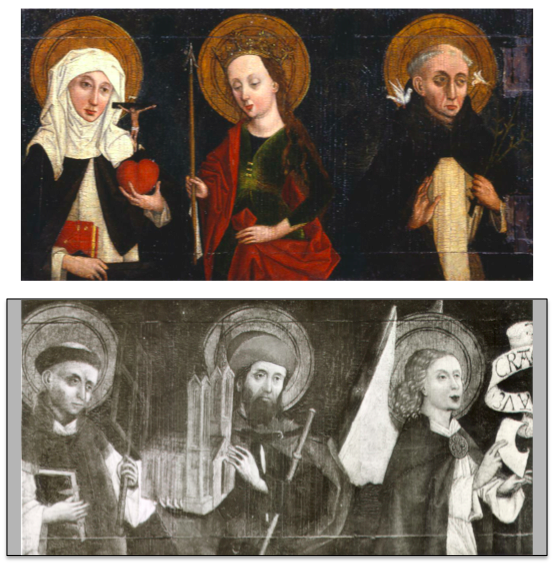 And why do I assume that both panels used to be left wings? That is rooted in their composition: the wing with Archangel Gabriel turned right had to have been paired with another containing image of the Virgin. Also, other saints in this wing (Lawrence and Sebald) are turned right as well. I suspect that the other wing of that set contained Virgin Mary and two other saints, all turning left. So together, the closed predella would look like this:

Meanwhile, in the panel still preserved in York the composition is slightly different: saints Catherine and Ursula face each other, while St Thomas Aquinas is turned right. Most likely the other wing had similar composition, so the closed predella was decorated with three pairs of saints, facing each other:

One workshop, active for several decades, may have produced lots of similar retables. Only a small percent of medieval altarpieces survived, so we should not assume that stylistically similar panels must have originated from one retable. Unfortunately, I can not propose where the York panels may have come from. At least one of them was probably from Dominican church, as it contains depictions of Dominican saints. Perhaps one day I will find some forgotten description that would help me establish their origin. Keep your fingers crossed.

My article Late Gothic Panels from the Collection of York Art Gallery: Predella-Wings from the Workshop of Hans Pleydenwurff, in: Biuletyn Historii Sztuki 2/2019, pp. 177-196 is available on-line.