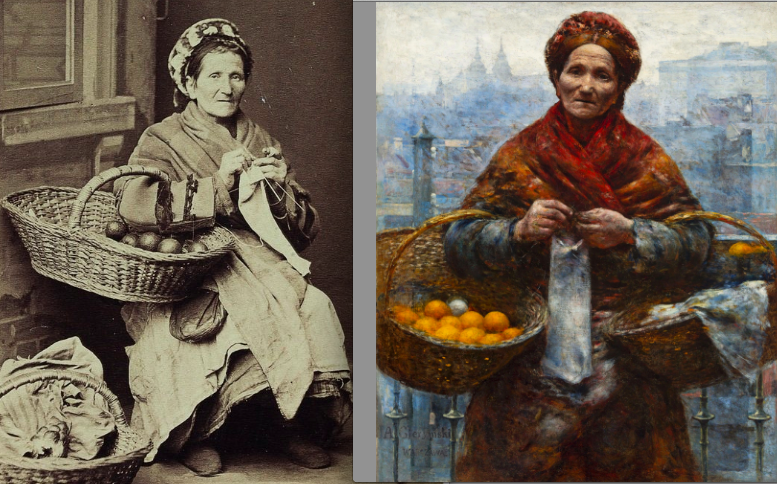 Lately in Polish social media suddenly one of the 19th century paintings made a significant appearance: it is “Jewess with Oranges” by Aleksander Gierymski and I decided to write about it here. It is going to be about relation between painting and photography in the 19th century – I have once written about this particular case elsewhere, although that article was only in Polish.

Let me start with an explanation about the social media appearance mentioned above. On his Facebook page Piotr Otrębski o Warszawie has published a famous Polish painting depicting woman selling fruits, juxtaposed with a photo of the same model, and his comment implied that he has just discovered this relation between the painting and the given photograph. Well, it is true, that is the same sitter, but it is hardly a discovery. The post went viral, and many people commented it expressing their surprise (“what a discovery!”, “Shocking!”, “great finding!”), but luckily some of the comments were more substantial, confirming that Gierymski was indeed inspired by photography, which is a known fact. Someone has referred to a particular scholarly publication on the subject (Anna Masłowska, „Aleksander Gierymski i fotografia”, [in:] “Aleksander Gierymski 1850-1901”, exhibition catalogue of the National Museum in Warsaw, Warsaw 2014), and even a few people linked my own short text published on this subject in the web service Historia: Poszukaj (available HERE).

What struck me the most was the way that post has been shared at the official Facebook fanpage of the National Museum in Warsaw. As it happens, both the painting and the photograph in question are in that particular collection. What an excellent opportunity to use the fan’s interest and to post some additional information on the background of the whole story! Still, the National Museum in Warsaw decided to pass on that opportunity – instead they just went on with the tone of sensation, simply commenting: “The Jewess with oranges found!”. As if they were surprised themselves by the juxtaposition of two images, both coming from their own collection. 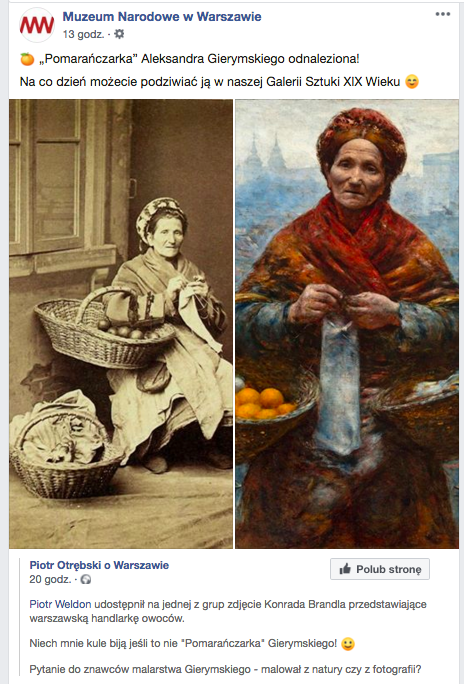 Perhaps it is time to explain what it is all about.

The photo is by Konrad Brandel (1838-1920), a famous Polish photographer and inventor. One of his most famous inventions was a portable photo camera, that he created himself in the early 1880s. It was called “photo-revolver”. Using bromide emulsion and a shutter really enabled to take photos out of atelier and even without a tripod, just holding the camera in a hand! (here I would like to make a reference to one of my earlier posts, focusing among others on the issue of exposure time in the 19th century photographs – available HERE). Thanks to this portable camera, Brandel was able to capture amazing moments of the everyday life in the streets of the 19th century Warsaw. His invention soon became quite popular, and also Aleksander Gierymski had one of those “photo-revolvers” himself. He got it in 1886 though, while the “Jewess with Oranges” was completed several years earlier. 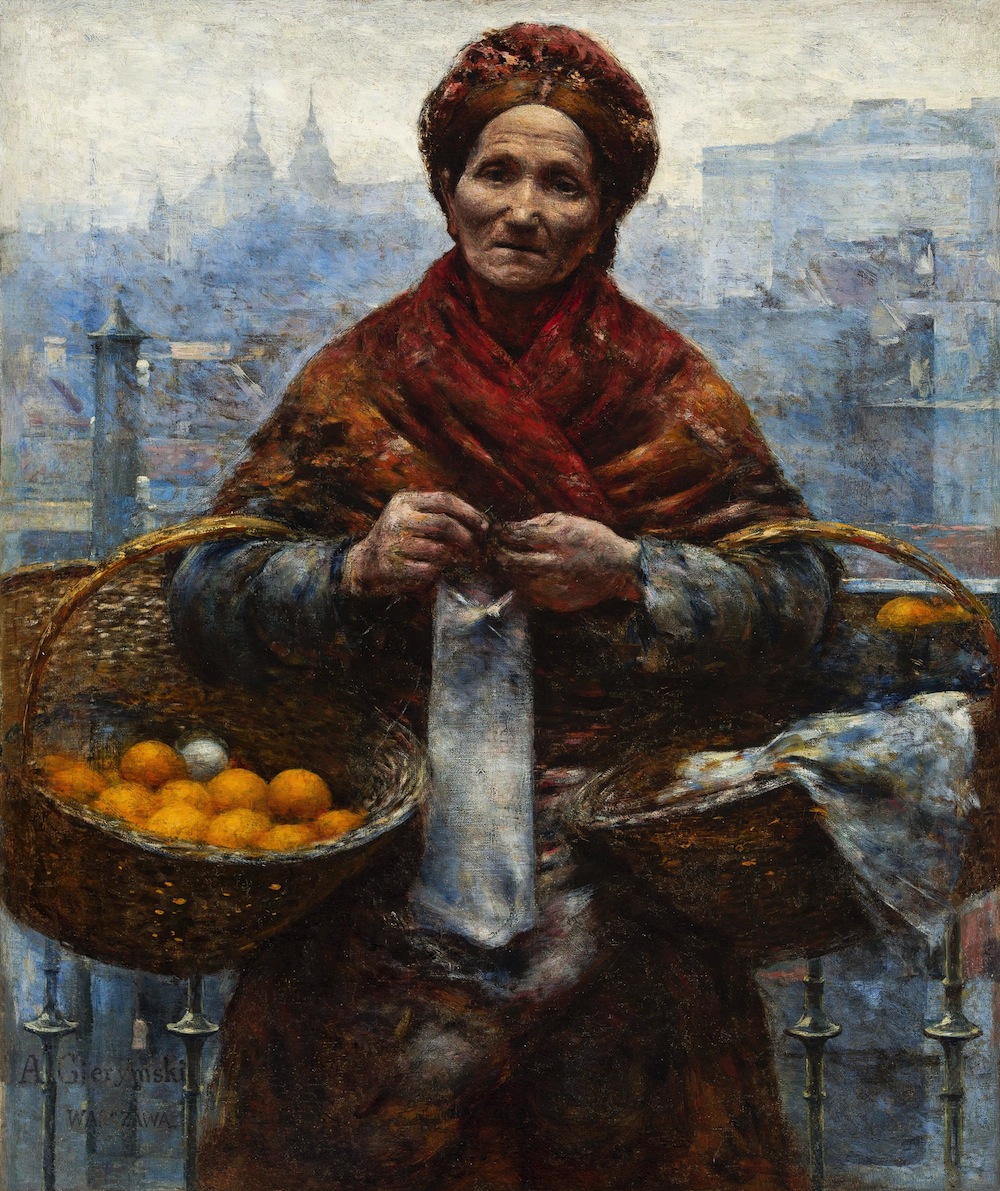 Aleksander Gierymski (1850-1901) is considered one of the greatest representatives of Polish realistic painting. It is often believed that the invention of photography has much caused the decline of naturalistic painting; that impressionism, and later post-impressionism and avant-garde movements developed partly due to the fact that depicting reality in painting (e.g. in portraiture) was no longer needed as photography could provide the same effect at a much lower cost. But in fact, the 19th century artists representing realism, who focused on depicting the reality as precisely as possible, actually made a lot of use of the modern invention of photography. Depicting something or someone in details is much easier if you can follow a photo.

A famous “Jewess with Oranges” by Aleksander Gierymski has been completed ca. 1880-1881 and is today in the National Museum in Warsaw. The artist created a replica of that painting in 1881, known as “Jewess with Lemons (or Oranges)”, which is in the Silesian Museum in Katowice. 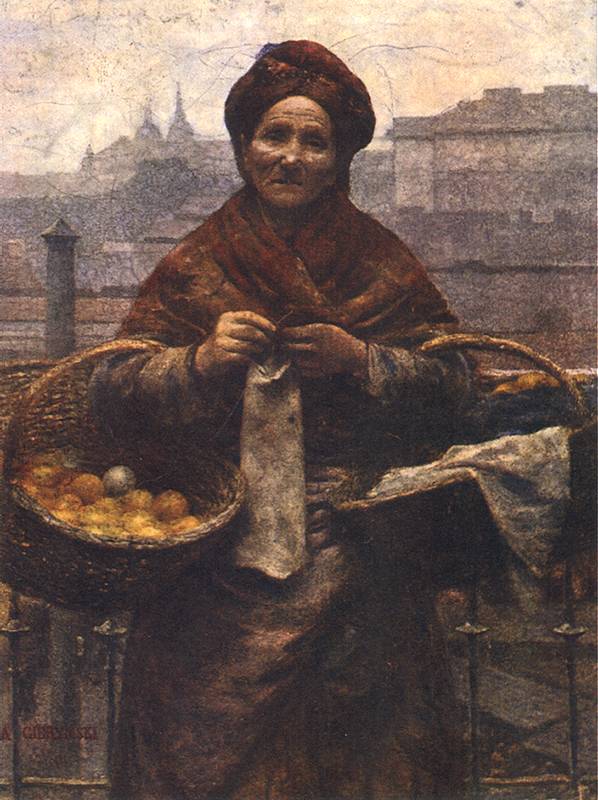 Undoubtedly, the Jewess is the same woman that Konrad Brandel photographed just a bit earlier. The photos, dated back to ca. 1879, are now in the National Museum in Warsaw: 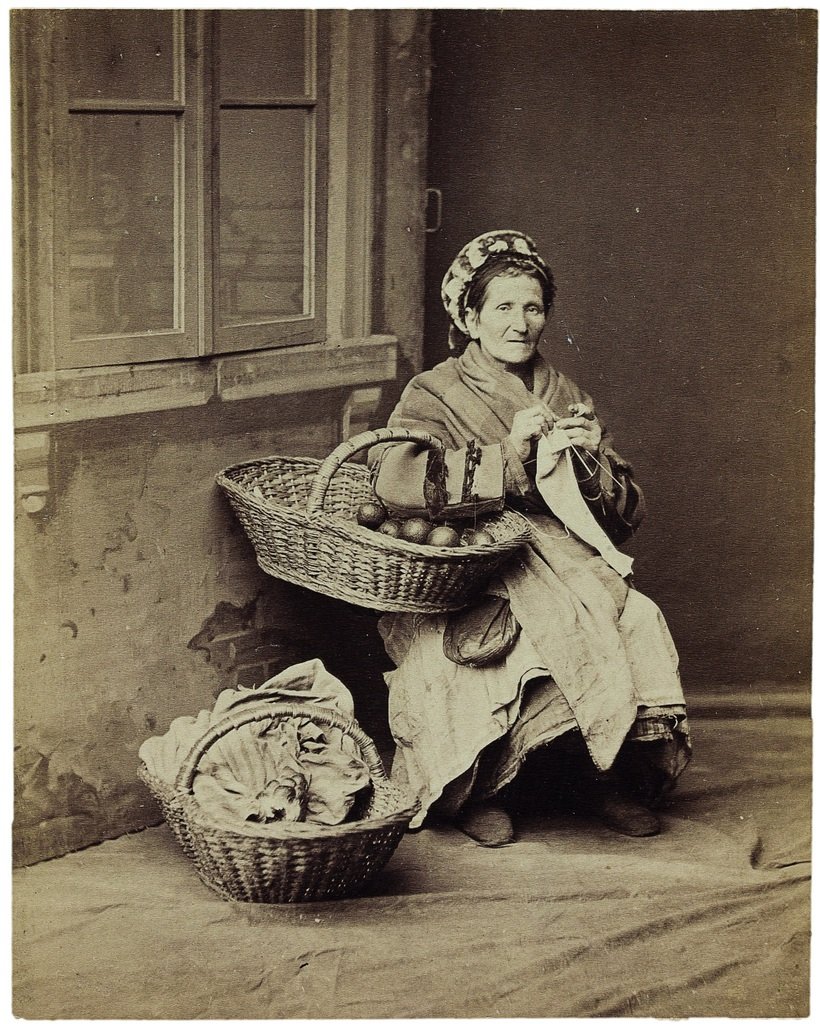 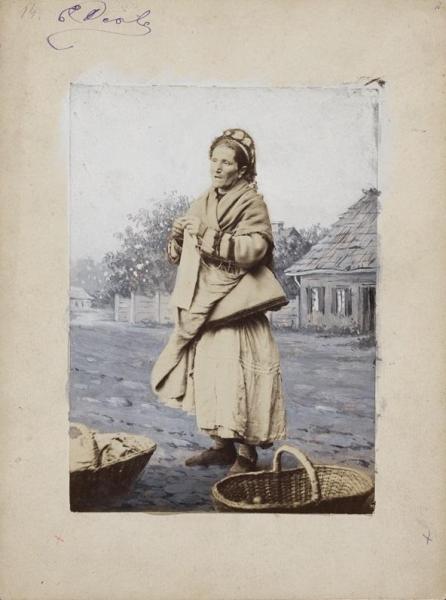 We should notice that the second photo must have served as a source of inspiration for another picture by Gierymski: an oil sketch of ca. 1880, which – unfortunately – is a war loss. 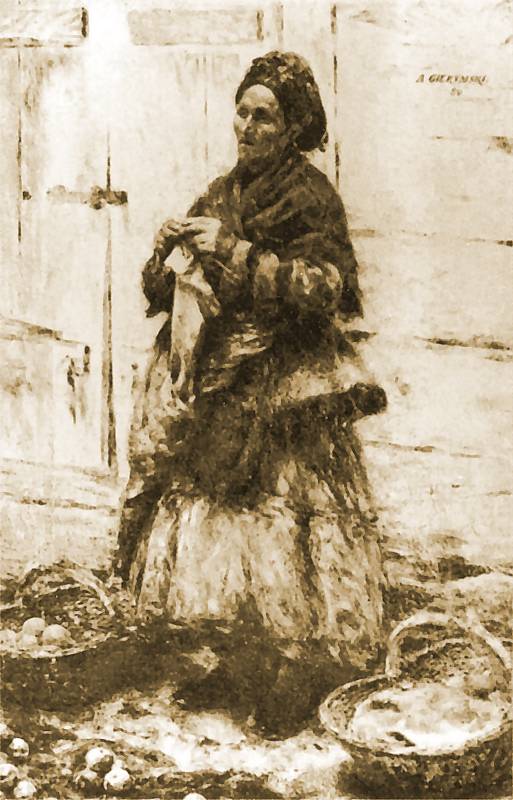 And finally I must say that, sadly, the publication by Anna Masłowska mentioned above (from the catalogue of the exhibition in the National Museum in Warsaw) is almost untraceable in the Internet. The table of contents of this catalogue has not been published on-line, and so it is really difficult to learn that such an article has been published at all. I think that nowadays such publications should be followed by more detailed on-line information – perhaps not only the table of contents, but also abstracts of all the included papers? Well, to be completely honest, I must say I wish all the scholarly papers were accessible in the Internet. But I also believe in blogs written by scholars – that is why I run this one myself, and I hope that thanks to this post more people would come to appreciate Polish painting and Polish photography of the 19th century.