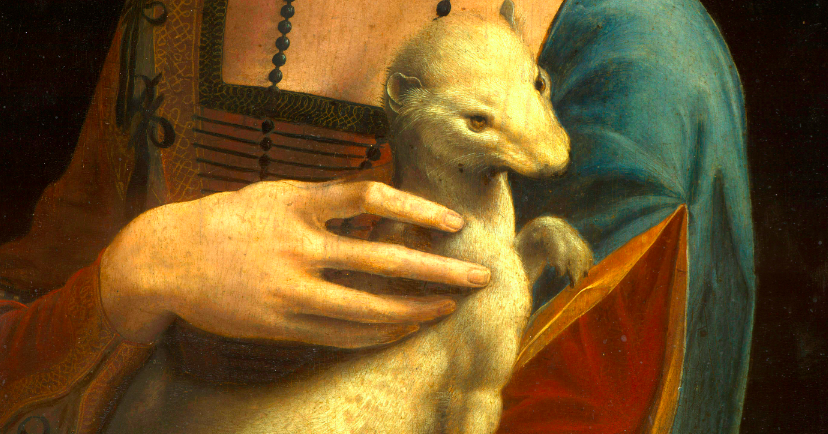 Today I would like to focus on one of the most famous masterpieces of Polish collections: The Lady with an Ermine (ca. 1490). The painting, by Leonardo da Vinci, is usually interpreted as a portrait of Cecilia Gallerani, who was a mistress of Ludovico Sforza, duke of Milan. This interpretation fits to her attribute: an ermine, in Greek called galéē (γαλέη), which would be an allusion to the sitter’s name. For the contemporaries, on the other hand, an ermine would clearly symbolise Ludovico Sforza, who had been in the Order of the Ermine and used that animal as a personal emblem. 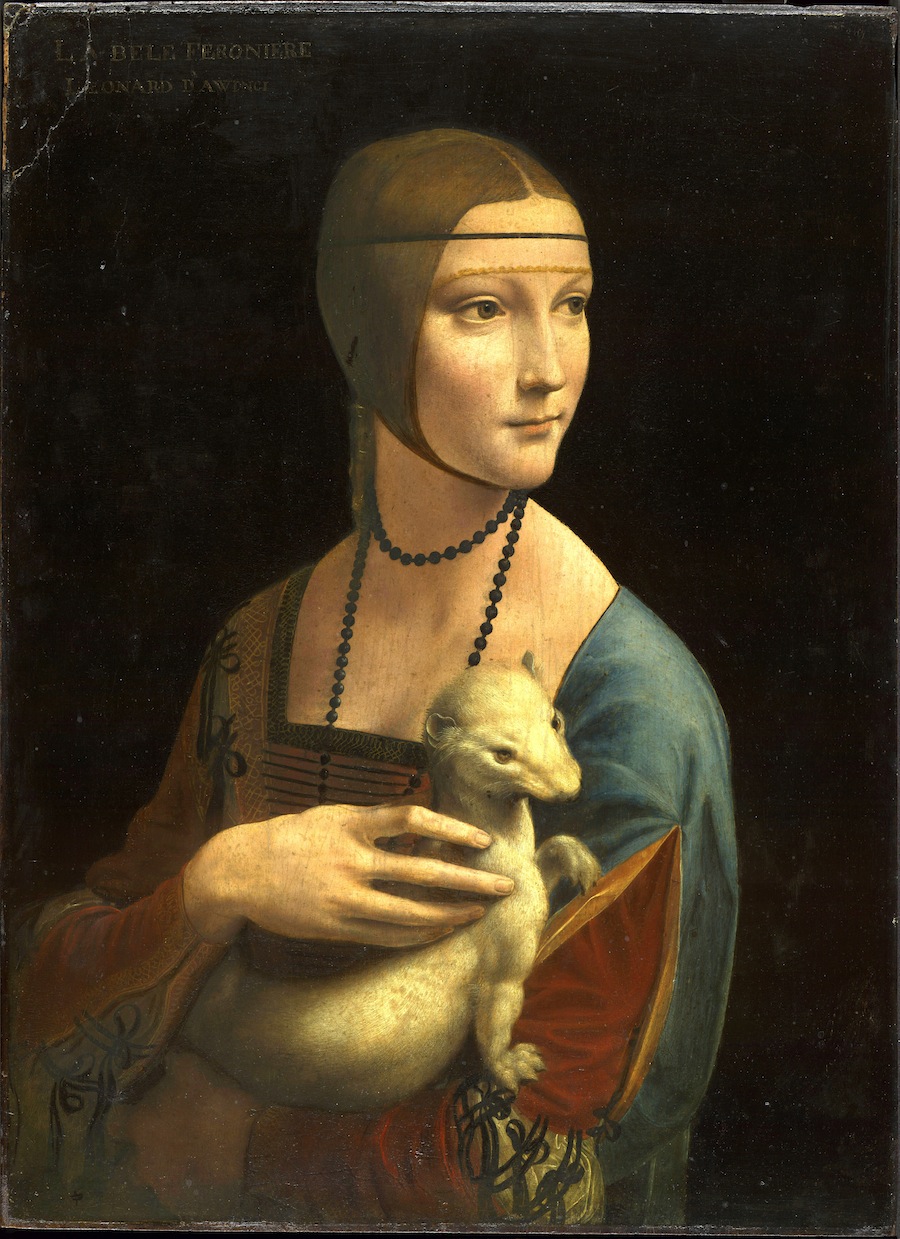 However, the identification of the depicted animal is still discussed by some scholars. In the early nineteenth century the painting was in possession of Izabela Czartoryska, and she also had problems with recognising this creature. In her French catalogue of her collection she wrote: The animal, held by the young lady, is difficult to describe. If it is a dog, it is ugly; if it is some other animal, I do not recognise it. Later she thought the thing through and in the Polish version of her catalogue she wrote: She holds an animal that resembles a marten. Later there was an idea that the animal is a weasel – the painting was actually popularly known as “Lady with a Weasel”. Actually an ermine (mustela erminea) and a least weasel (mustela nivalis) look very much alike, and they both may turn white during winter. 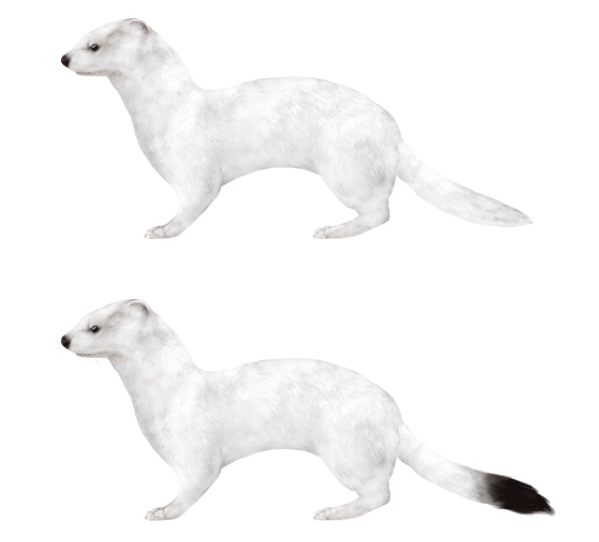 An ermine (stoat) is quite distinctive thanks to the black spot at the end of its tail – but in the case of the painting we do not see the tail. Perhaps that was done by Leonardo da Vinci on purpose, as a kind of play with the viewers, or maybe even a sort of joke about his employers. The point is that the ermine and the weasel had different symbolic meanings. The ermine was a traditional symbol of purity, hence quite an appropriate attribute for an unmarried lady, and probably the one that was expected by the sitter in the case of this portrait. On the other hand, the weasel was described in the medieval bestiaries as an impure animal, and everybody knew that Cecilia Gallerani was a maiden, but not a virgin. Also, weasels in general were understood in the renaissance Italian culture as the symbols of pregnancy: it should be noted here, that in 1491 Cecilia gave birth to Ludovico’s illegitimate son. 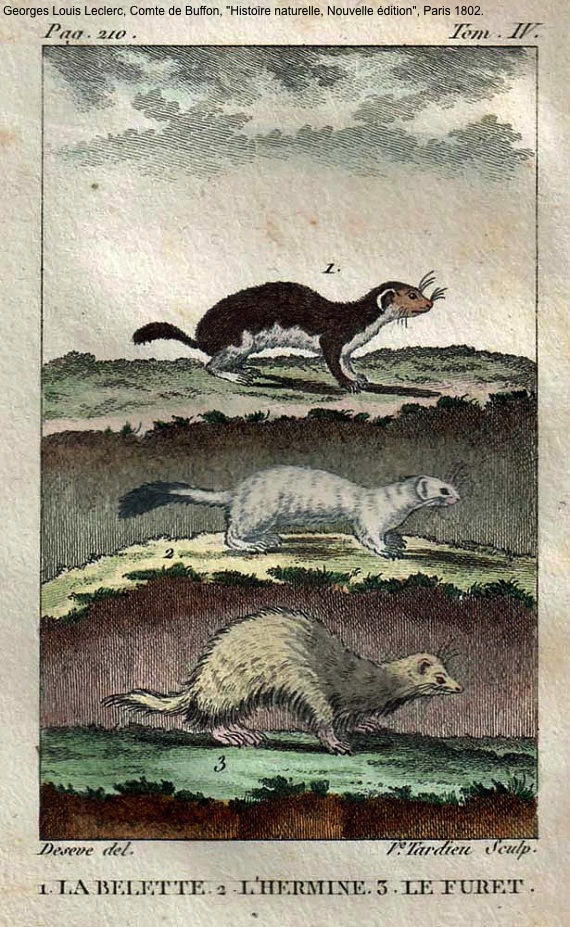 Meanwhile, there is also a theory, that the Lady with an Ermine is actually… the Lady with a Ferret! It was pointed out that the ermine painted by Leonardo is strangely large, has a long nose and small eyes, and its paws resemble some drawings by da Vinci, depicting dogs and bears. Indeed, the attribute of the Lady in this portrait looks like a white ferret; perhaps a domestic ferret was simply used as a model for the ermine? The ferrets were kept and used as hunting animals. So, after all, it was a kind like a dog, as Izabela Czartoryska initially suspected. 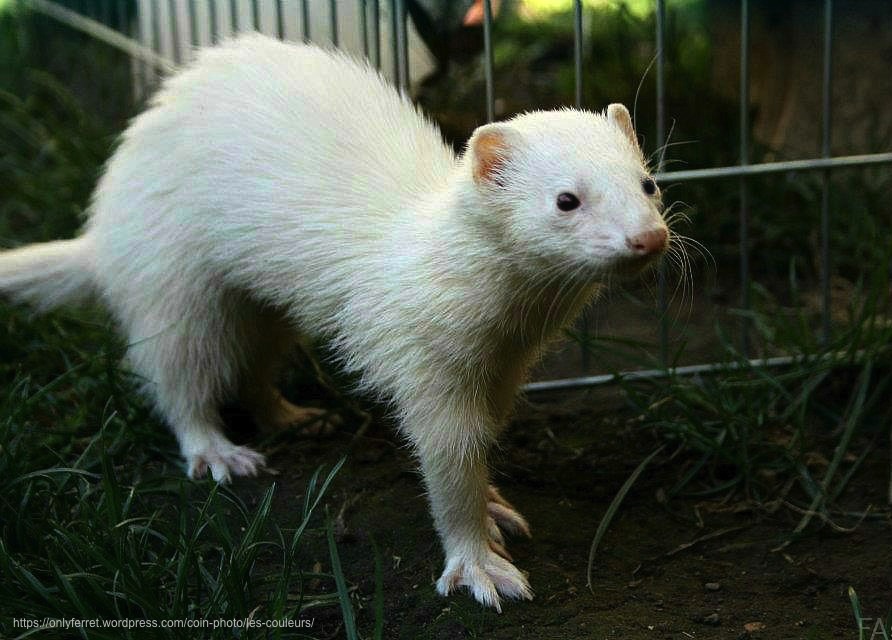 The painting was brought from Italy by Prince Adam Jerzy Czartoryski and given by him to his mother Izabela. Back then they were confused not only about the animal depicted in this portrait. There is an inscription in the upper left corner that reads “La Bele Feroniere”, which means that the painting was mistaken for the other portrait by Leonardo, La Belle Ferronière, today in Louvre. The inscription was clearly added when the painting was already in Poland; only the Poles could have describes Leonardo da Vinci as “Leonard d’Awinci”!

Unfortunately back then they did another thing: they have overpainted the masterpiece, not only retouching the sitter, but also covering the background with a thick layer of black paint. It is uncertain why exactly they did that; initially the Lady was most likely depicted against a subtle, bluish grey chiaroscuro background. In this case the painting’s fame became its curse: a less known picture would have been cleared of that additions by know. But who would dare changing anything it the masterpiece by Leonardo da Vinci today? This painting looked like this for too long and now everyone recognises it with that hideous black background.

In 2004 there was a comedy movie produced in Cracow, entitled Vinci – it told a story of fictional theft of this particular masterpiece. There is a following dialogue in this movie, when two thieves talk about the painting:

– The painting I’ve told you about is in the Czartoryski Museum — Da Vinci?! — How did you know? — Well, there is only one painting in Poland!

Of course we do have some other paintings here, but the fact is that this particular is the most famous one. Can you imagine it with a very different colouring? 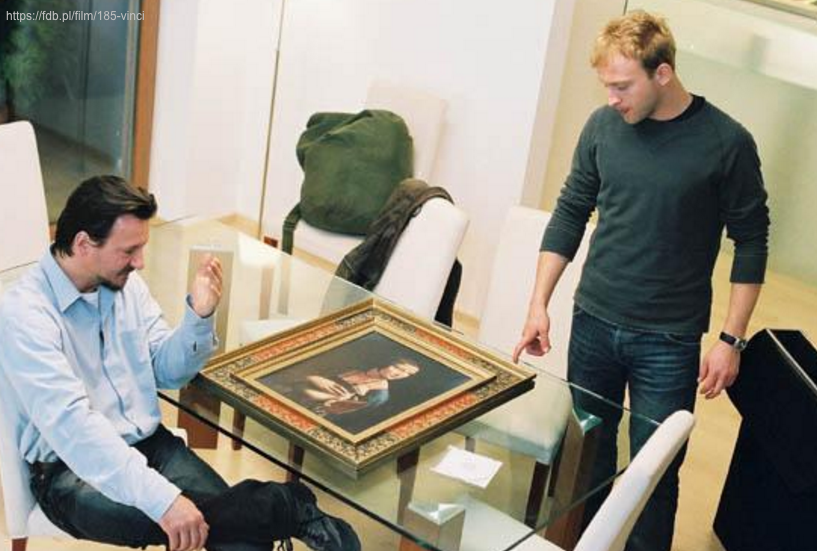