A treasure from Tyniec 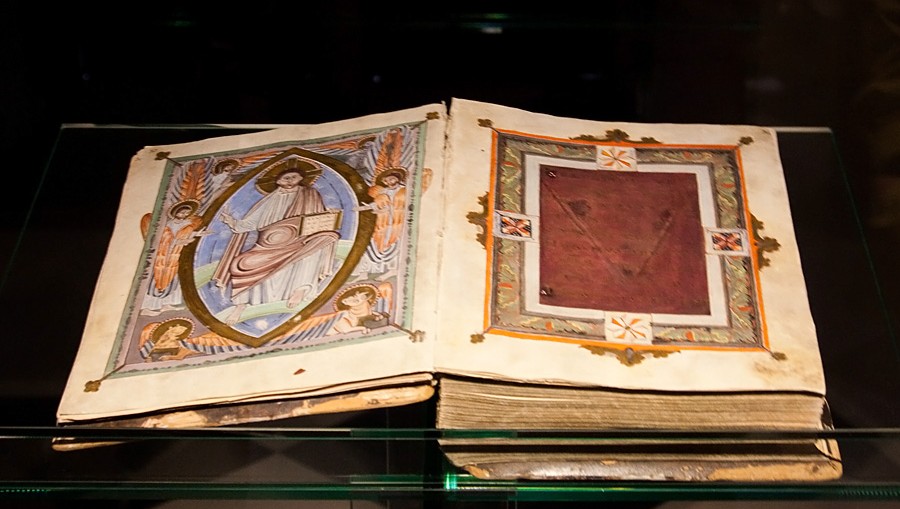 Many of the Polish art collections are being digitalised now and as a result the great art pieces we have are more and more available for the scholars around the world. Today I would like to focus on one extraordinary manuscript, which is an example of the late-Ottonian illumination. It is called the Tyniec Sacramentary. 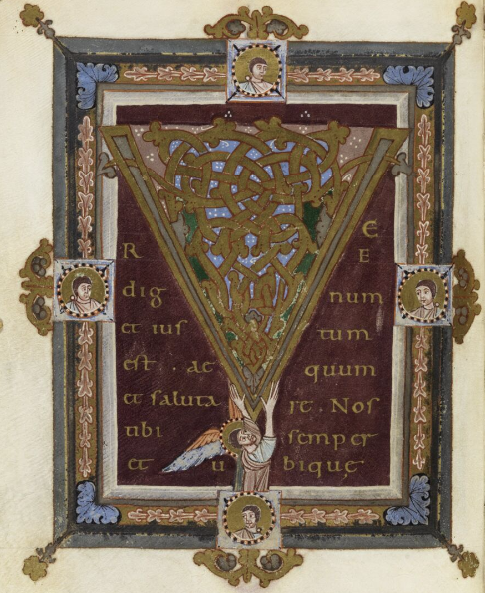 The Sacramentary was a book the liturgical book that collected the texts for the celebration of the Mass before the Missal was created; the Sacramentary contained only the words spoken by priest celebrant, but on the other hand it also provided texts for ordinations, blessings, consecrations, etc. The Tyniec Sacramentary was most likely created in Cologne in the 1070s (however the dating is not certain). It may actually have been given to the Benedictines in Tyniec by Polish king Bolesław II the Bold; in any case, it belonged to the Tyniec monastery already in the 11th century. In 1656 it was robbed and as we can learn from the note on its first page, it was bought back by the monks (so someone made an interesting business on that occasion: apparently the Benedictines payed to get back what was stolen from them). In the 19th century, when the Benedictines in Tyniec had a very hard time, the book was purchased for 1000 złoty by Stanisław Kostka Zamoyski, who took it to Warsaw and placed in his library (Zamoyski Ordynacja Library). Luckily the manuscript was evacuated to Łowicz during the World War II and thanks to that it survived; the other books from the Library that were left in Warsaw got destroyed in a fire in 1944. Today the Tyniec Sacramentary is back in Warsaw in the collection of the National Library (Biblioteka Narodowa). 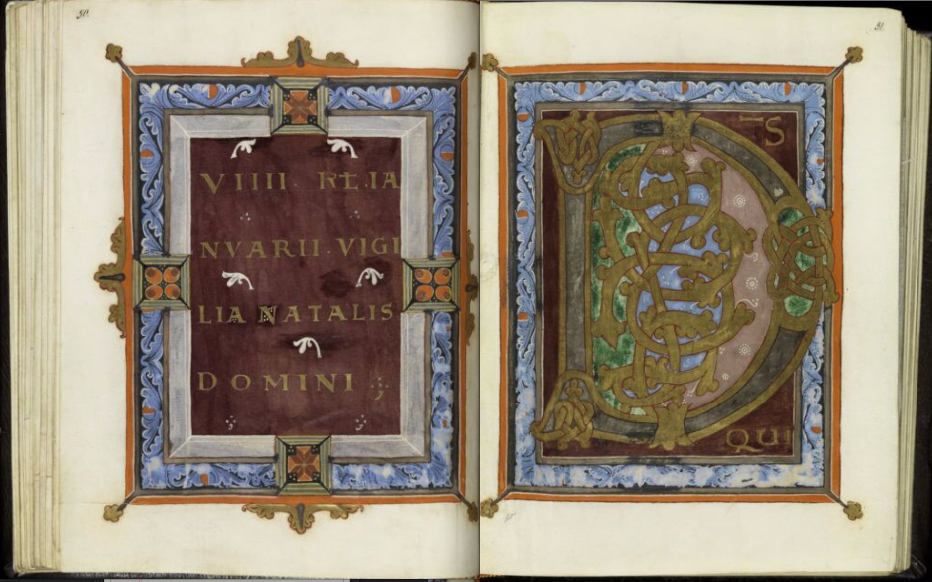 Ottonian art was inspired both by the Carolingian and the Byzantine artistic achievements. At first it was actually influenced by the ancient traditions, but later on it transformed towards a bit simplified manner. The Cologne school of the second half of the 11th century is an example of such late-Ottonian art: the decorations got rather flat and the figures became somehow stiff and even awkward. A very good example would be here the Christ from our Sacramentary: the folds of his robes became a bunch of lines and circles, and both the Saviour and the Angels are depicted in rather un-natural way: 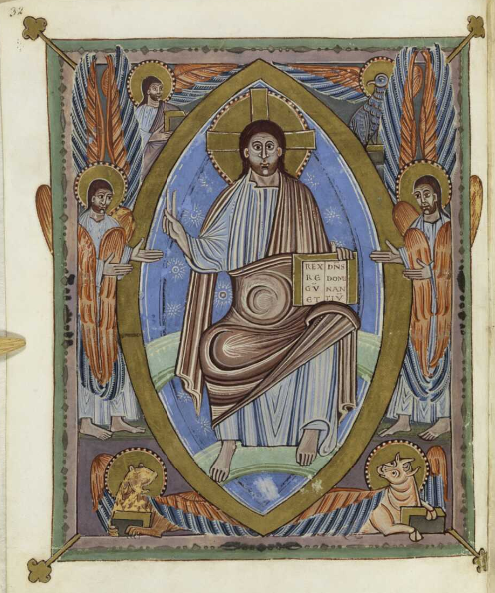 However, the decorations of the Tyniec Sacramentary still contain the motifs that derive from the ancient art.; for example, the beautiful half-figure depictions in the medallions placed on acanthus borders, or the stars depicted in quite an illusionistic, almost three-dimensional way: 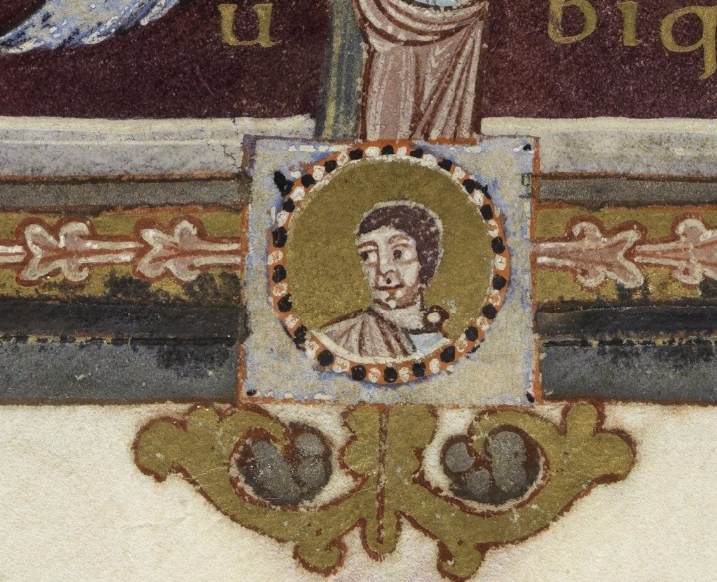 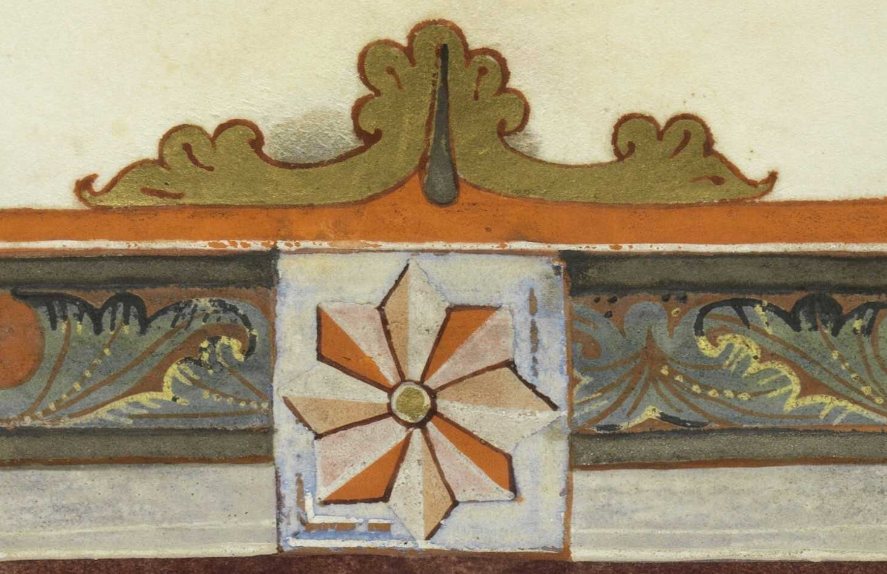 Interestingly, the Tyniec Sacramentary may be considered as belonging to a group of manuscripts made in Cologne at the turn of the third and fourth quarters of the 11th century (related to so called Master of the Gospels of Abdinghof: Berlin, Kupferstichkabinett 78.A.3). Another example, containing very similar decorations, would be a Book of Gospels in the British Library (Harley MS 2820): 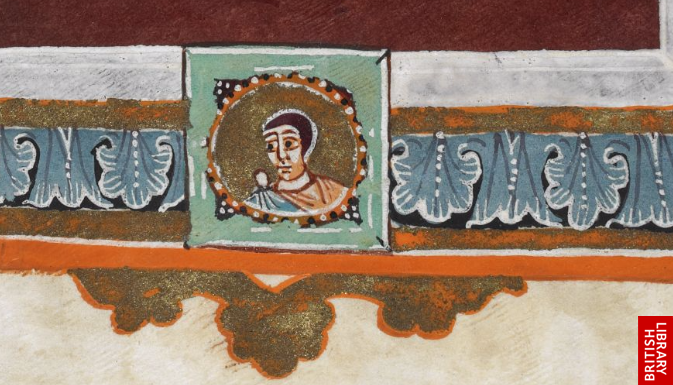 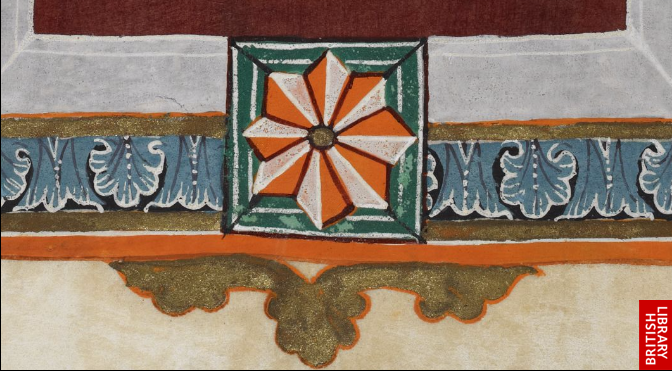 Additionally, there are also similar decorations in the Sacramentary in Universitätsbibliothek in Freiburg (Ms. 360a): 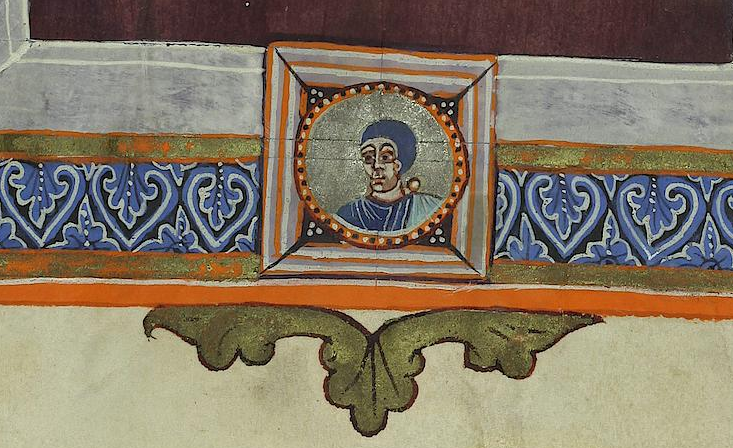 The Sacramentary in Freiburg, as well as the one from Tyniec, contain a full-page miniature of Crucified Christ, which connected with the beginning of the Mass: ” Te igitur, clementissime Pater, per Iesum Christum Filium tuum Dominum nostrum…”. The Cross is also a letter “T” that starts the whole paragraph: 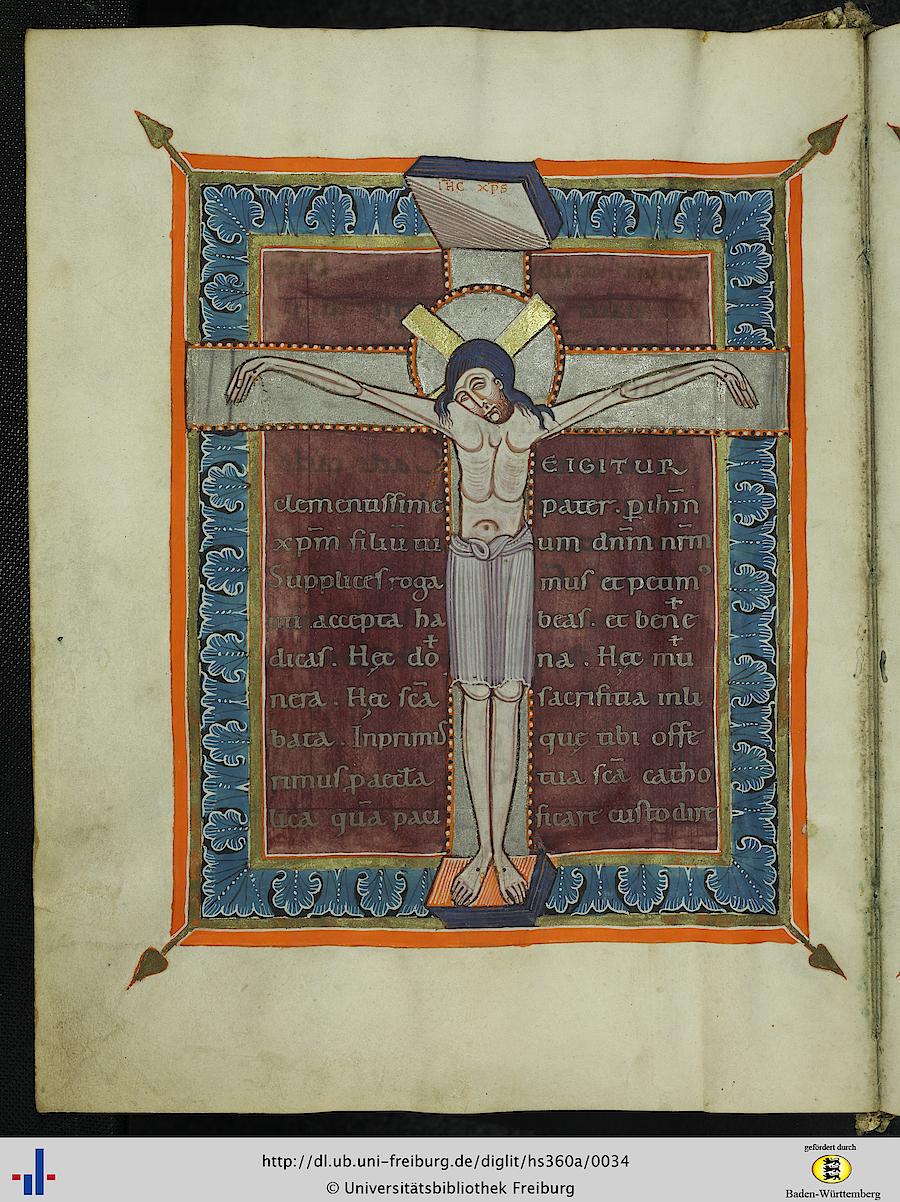 But let’s have a look at the same miniature in the Tyniec Sacramentary – it is close to the one from Freiburg, but contains some different elements. First of all, in the Tyniec manuscript Christi s depicted as the King of the Universe: he has a globe under his feet and a crown on his head. It is not a crown of thorns, but the silver crown (well, it looks a bit like a brick, but it is a crown indeed! Only the silver got oxidised and so now it seems rather grey…): 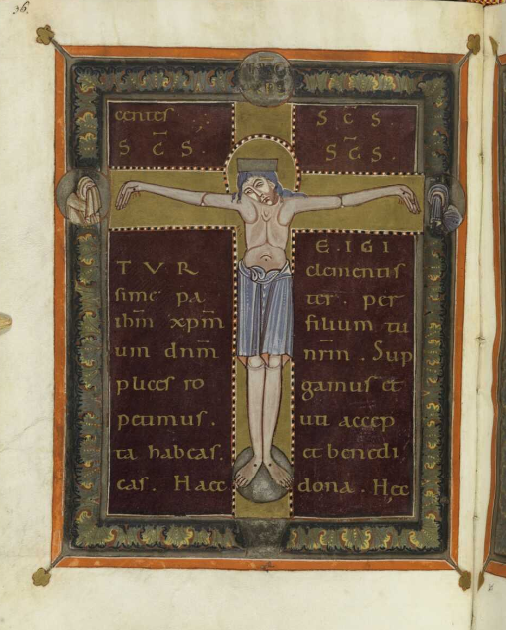 And finally there is one more fascinating motif: at the end of the both sides of the cross we may see two weeping figures, one dressed in red and the other one in blue. Of course, they are mourning the death of the Saviour – but who are they? 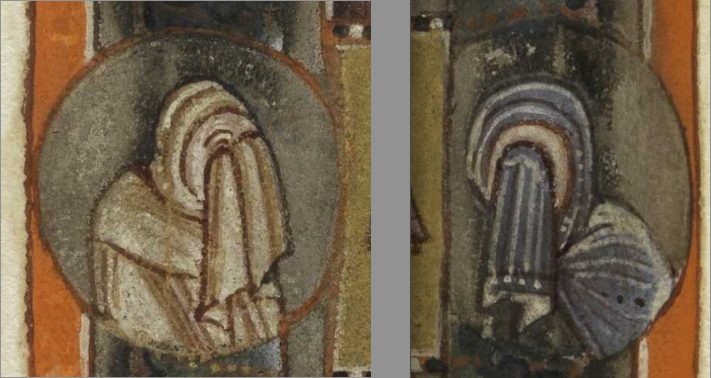 Red and blue are the colours related to the Apocalyptic images (for example red and blue angels may be found in the 6th century mosaic in Sant’Apollinare Nuovo in Ravenna). On the other hand we could associate those figures with Virgin Mary (in blue) and John the Evangelist (in red). Nevertheless in this case they are most likely the personifications of the Sun and the Moon: Sol and Luna, who cry over the crucified God. Those personifications at the very same composition may be found for example in the Lothair Cross (Cologne, before 1000, in the treasury in Aachen): 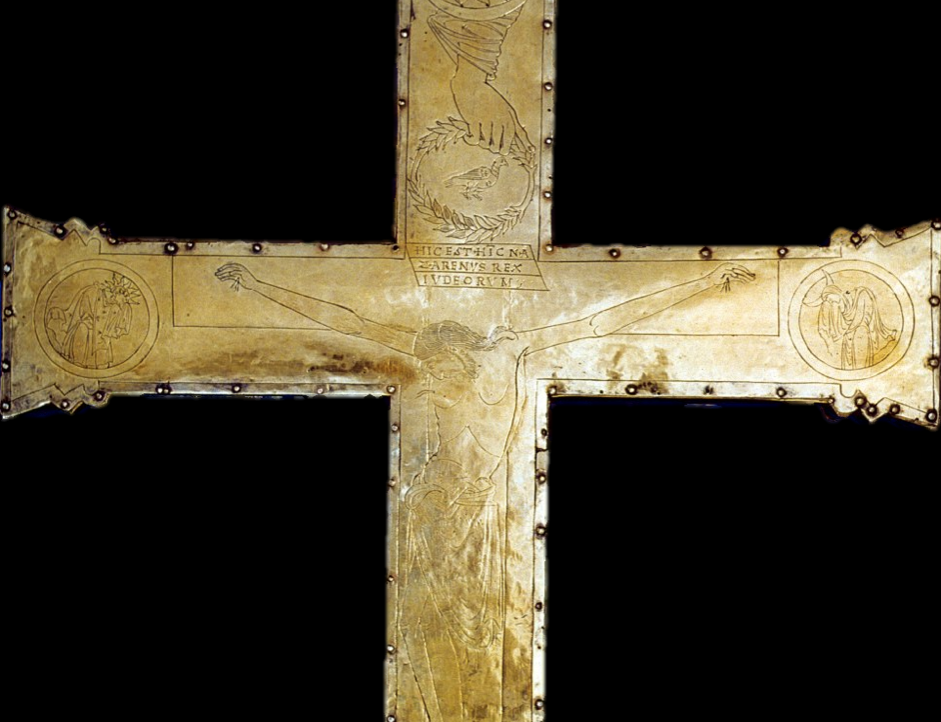 Sun and Moon were often depicted together in the images of the Crucifixion: at the moment of Christ’s death it got dark in the middle of the day, so it was as if day and night occurred together. Also both celestial bodies were mentioned in the Psalm 89: His dynasty shall endure for ever, his throne like the sun before me,7 as the moon is established for ever, a faithful witness in the skies. The Sun and the Moon also symbolise masculinity and femininity; the Sun represents Christ while the Moon represents the Church. Well, there are many possible interpretations…

But there are more interesting things hidden in the Tyniec Sacramentary; for example, the neumes in the forms of lines and drops above the text, which indicate rhythm to be sung. Although they were probably added in the 12th century, it is still the oldest example of the musical notation survived in Poland.

Perhaps the Tyniec Sacramentary is not the most brilliant example of the pre-romanesque art, but it is undoubtedly a very interesting one. We do not have a lot of such artworks in Poland and it is one of the most valuable manuscripts in our collections. We should enjoy it as a wonderful treasure – even if Christ is depicted there in a bit awkward way. Well, his eyes are rather strange and something is really wrong with his ears – but otherwise, isn’t he fascinating? 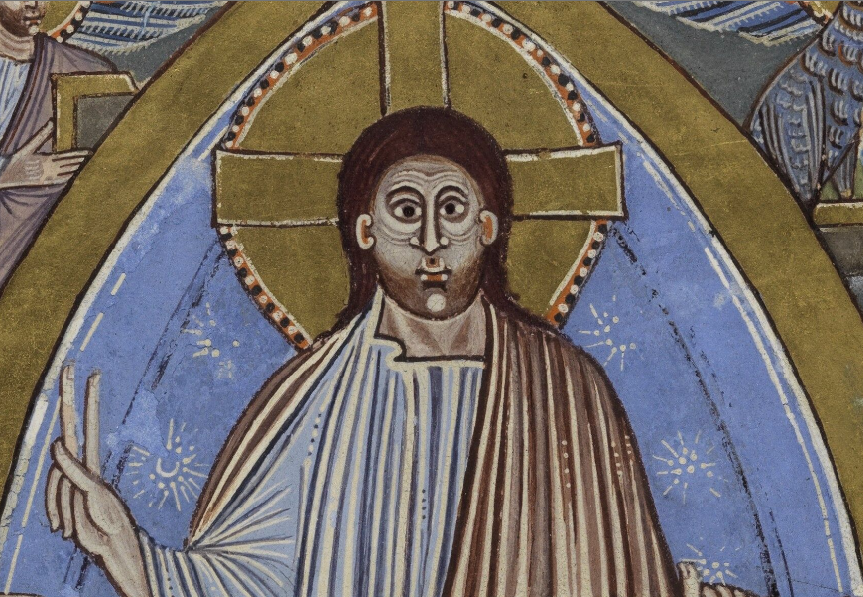 The Tyniec Sacramentary is fully digitalized, available in the service polona.pl

You can also compare it with the other manuscripts on-line: the Gospels in British Library and the Sacramentary in Freiburg.

Interestingly, the analise of liturgical formula of this Sacramentary proves that in contrary to traditional beliefs this book may rather have been destined to be used by a bishop or clergy, not by monastic community. Dr. Paweł Figurski actually suggested, that this manuscript has originally been founded by Cologne Archbishop for the Collegiate church of St Gereon in Cologne, and it has not been transferred into Tyniec until late Middle Ages (Paweł Figurski, “Political Liturgies, Cologne’s Manuscript Culture, and Historical Myths: The Provenance of the Sacramentary of Tyniec,” in: Das Sakramentar aus Tyniec: Eine Prachthandschrift des 11. Jahrhunderts und die Beziehungen zwischen Köln und Krakau in der Zeit Kasimir des Erneuerers, eds. Klaus Gereon Beuckers, Andreas Bihrer, Cologne 2018, pp. 66-91)