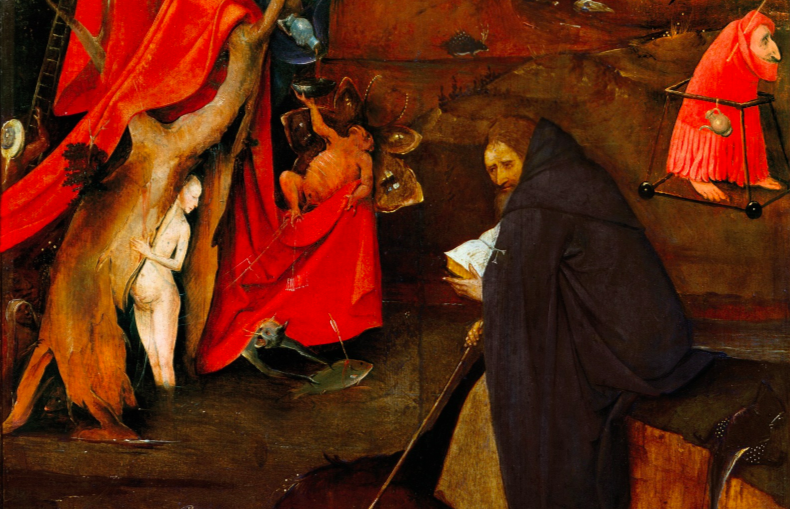 The long, cold and dark November evenings are sometimes difficult to bear. They often make us feel depressed and doubtful. This kind of situation in the lives of the saints is often called “the temptation”; even Christ was tempted in the desert. Today we will focus on the most famous temptation, often depicted in art of all ages: that is the Temptation of Saint Anthony. 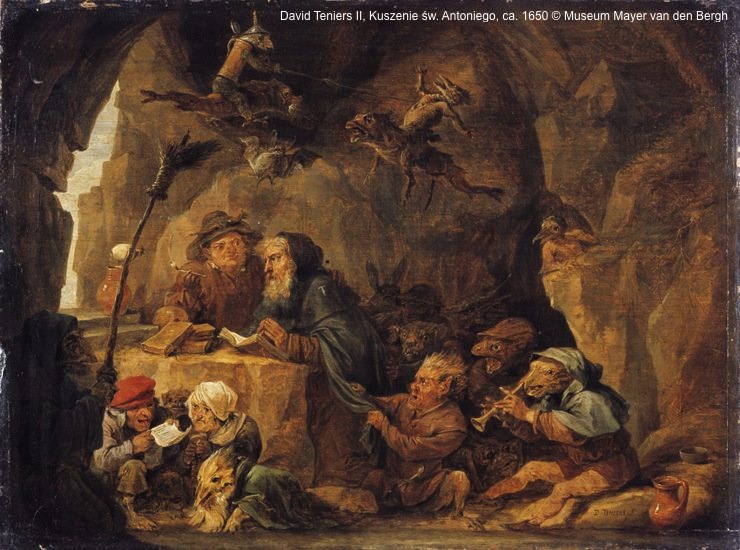 Saint Anthony was a hermit living at the turn of the 3rd and 4th centuries, his attribute is a pig – I wrote about it earlier (post available here). The most popular episode of his life was a temptation, described in the medieval “Golden Legend”:

S. Anthony was born in Egypt of good and religious father and mother, and when he was but twenty years old, he heard on a time in the church read in the gospel, that said: If thou wilt be perfect go sell all that thou hast and give it to poor men; and then according thereto he sold all that he had, and gave it to the poor people and became an hermit. He had overmany temptations of the devil. Then on a time when he had overcome the spirit of fornication which tempted him therein by the virtue of his faith, the devil came to him in the form of a little child all black […] After, he went into a hole or cave to hide him, and anon he found there a great multitude of devils, that so much beat him that his servant bare him upon his shoulders in to his house as he had been dead […] S. Anthony revived and made his servant to bear him into the pit again where the devils had so evil beaten him, and began to summon the devils again, which had beaten him, to battles. And anon they came in form of divers beasts wild and savage, of whom that one howled, another siffled, and another cried, and another brayed and assailed S. Anthony, that one with the horns, the others with their teeth, and the others with their paws and ongles, and disturned, and all to-rent his body that he supposed well to die.

Obviously such descriptions were great inspiration for the artists to create the very fantastic depictions. One of the most famous examples is the Triptych of the Temptation of Saint Anthony by Hieronymus Bosch; the analysis of that masterpiece is a subject for another post, so let’s now just take a look at those incredible pictures: 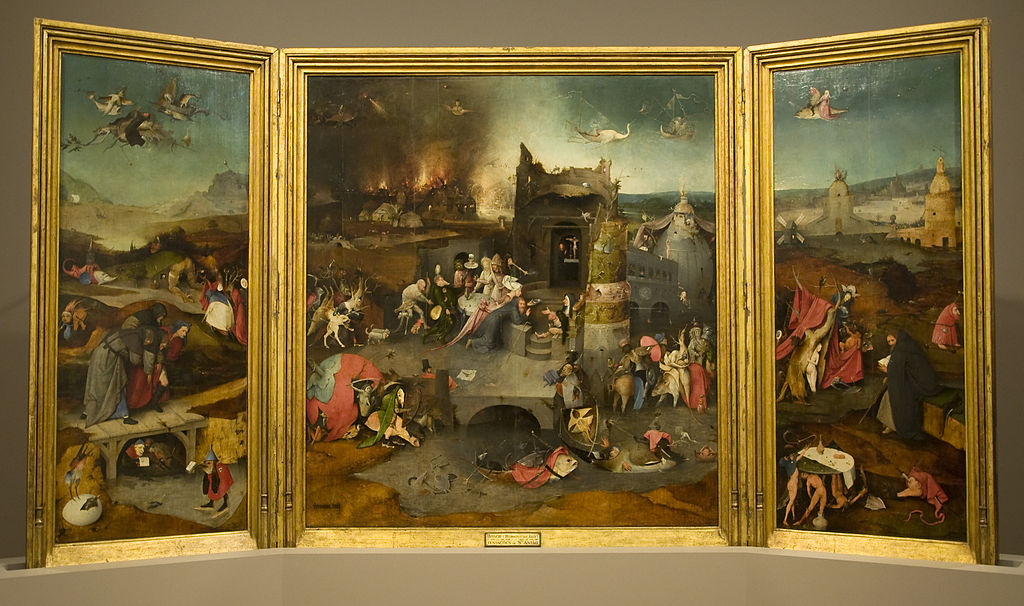 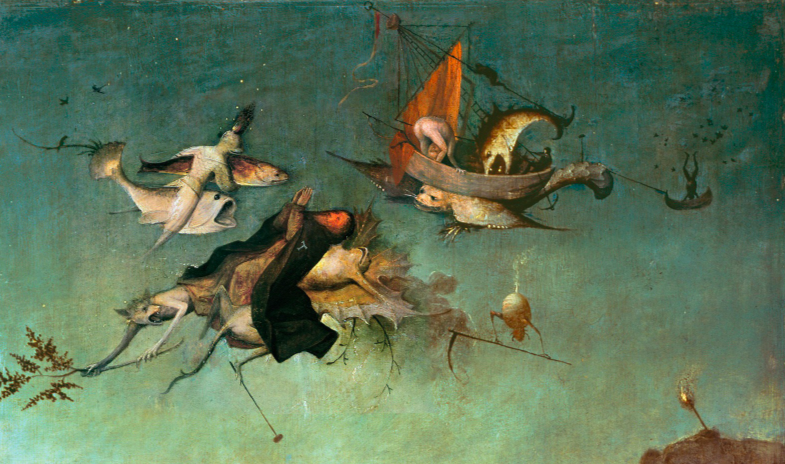 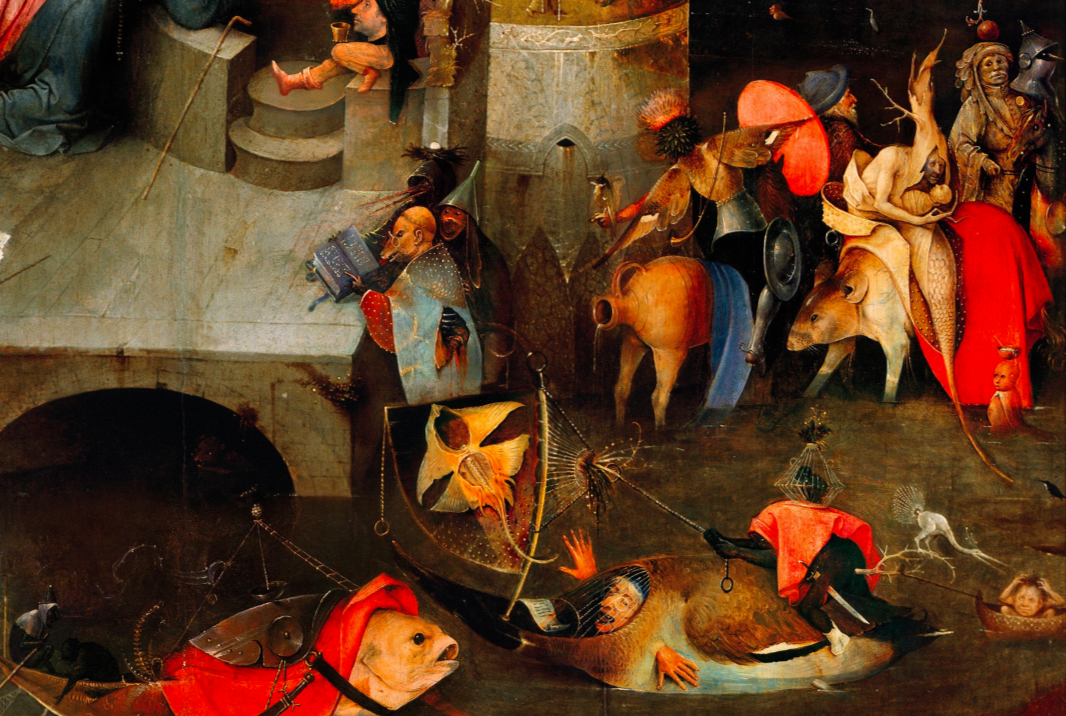 Most commonly, however, the artists focused on the sexual character of the temptation. Let’s turn to the earliest source; the earliest “Life of Saint Anthony” was written by his pupil, Saint Athanasius the Great, the Bishop of Alexandria (c. 295-373). That is what he wrote:

The demons, therefore, if they see all Christians, and monks especially, labouring cheerfully and advancing, first make an attack by temptation and place hindrances to hamper our way, to wit, evil thoughts. But we need not fear their suggestions, for by prayer, fasting, and faith in the Lord their attack immediately fails. But even when it does they cease not, but knavishly by subtlety come on again. For when they cannot deceive the heart openly with foul pleasures they approach in different guise, and thenceforth shaping displays they attempt to strike fear, changing their shapes, taking the forms of women, wild beasts, creeping things, gigantic bodies, and troops of soldiers.

Saint Anthony surely has a very impressive vision here: a naked woman replaced Christ on the cross, and the inscription INRI (lat. Iesus Nazarenus Rex Iudaeorum) was replaced by the word EROS. The devil pushes Christ away and the baroque angels are turning into the skeletons, as the sin brings death to the soul. Interestingly, we can see that the artist assumed that the angels have the bones also inside their wings. The book in front of Antony has a title ” De Continentia Josephi” (about the abstinence of Joseph) and the illustration that refers to the story from the Old Testament. Biblical Joseph, son of Jacob, was sold by his brothers to be a slave in Egypt. He served a man called Potiphar, whose wife tried to seduce him, but Joseph managed to resist the temptation. Angry woman accused Joseph of the attempt to rape her, so he ended up in prison. He was finally released as it turned out that he is able to explain the meaning of Pharaoh’s dreams, but that is a different story. Here of course Joseph is brought up as a man who was tempted by an evil woman, but managed to resist her.

For the end of this post I have saved the painting that is maybe a bit less spectacular, but in my opinion much more moving. It is the “Temptation of Saint Anthony” by Lucjan Wędrychowski (1854-1934), which is kept in the National Museum in Cracow. Anthony is a lonely man sitting in the darkness, and the image of the tempting woman is just a shape in the smoke of fireplace. Anthony is calm and focused, the temptation is not an exciting experience. 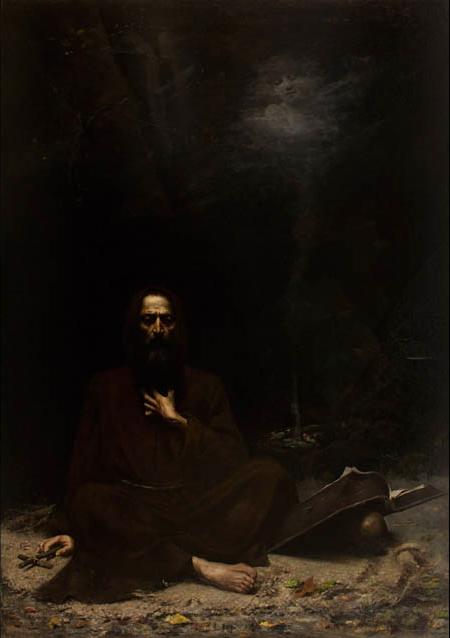 Let’s get back to the “Golden Legend” to check out how the whole temptation ended:

Then came a clear brightness, and all the beasts fled away, and S. Anthony understood that in this great light our Lord came, and he said twice: Who art thou? The good Jesu answered: I am here, Anthony. Then said S. Anthony: O good Jesu! where hast thou been so long? why wert thou not here with me at the beginning to help me and to heal my wounds? Then our Lord said: I was here but I would see and abide to see thy battle, and because thou hast manly fought and well maintained thy battle, I shall make thy name to be spread through all the world.

And that is the essence of the temptation: even the saint is left alone when it comes to fighting the forces of evil, just as it is shown in the painting by Wędrychowski. Temptation does not include exciting fantasies, but comes rather in a form of depression, loneliness and darkness. It is an internal desert that attracts demons – they feed on the sadness and frustration. Saint Anthony did not receive the immediate help: Christ did not step in, but waited aside to see how Anthony manages the whole situation on his own. Because in fact that is how it works: we can’t avoid having dark thoughts and we shouldn’t assume that our faith would miraculously save us. In fact in the end we always have to face the evil ourselves, to fight the darkness entirely alone. But we can do it, and every dark November finally comes to an end.