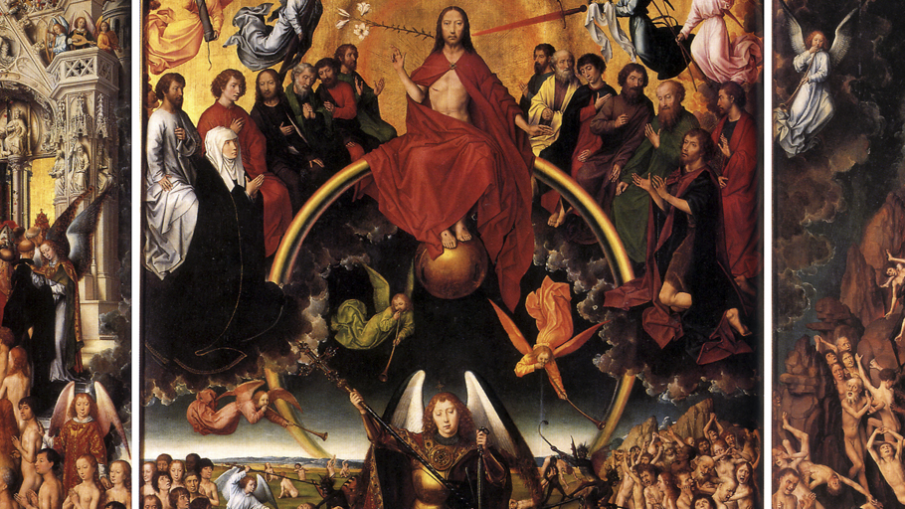 The famous Last Judgement Triptych will be soon shown at an exhibition in Rome, dedicated to Hans Memling. The altar is going from Gdańsk to Rome; Polish media are writing about that journey, so let’s have a look at this masterpiece today.

Hans Memling was born probably circa 1440 in Seiligenstadt (Mainz region), as a son of Hamman Mömilingen and Lucia Strin (they both died around 1451). We don’t know where he was studying; at first likely in Germany, but later maybe in Brussels, in the workshop of Rogier van der Weyden. In the archives of Bruges, he is mentioned for the first time in 1465, when he probably started to work in that city. He died on August 11th 1494. Over 85 masterpieces are attributed to him and the earliest of them is a triptych in Gdańsk.

The altar was commissioned by Angelo Jacopo Tani (the Italian banker, the head of the Brugian branch of the Medici bank) probably for the occasion of his marriage with Catharina Tanagli, which took place in 1466. The altar might have been completed before the birth of the first daughter of the couple, which was in 1471. The donors are depicted in the outer part of the wings, visible when the altar is closed. 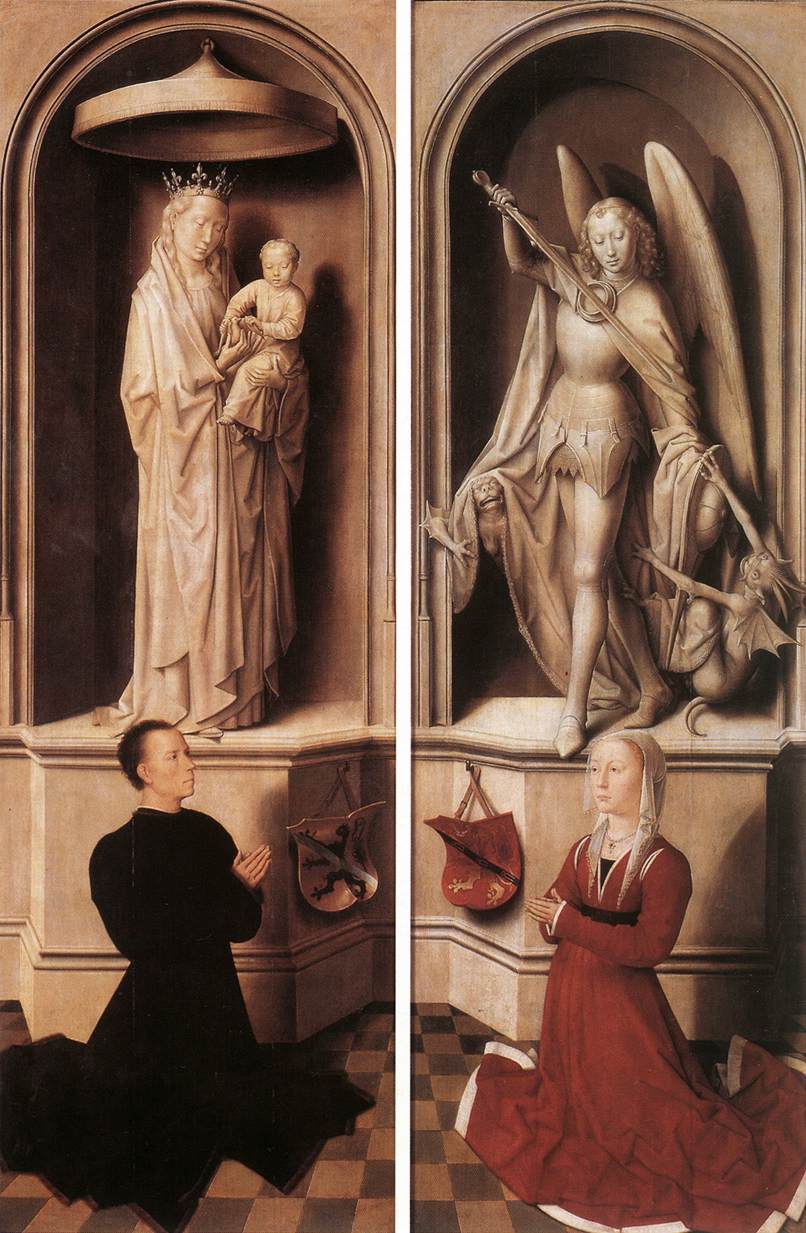 Meanwhile, Angelo Tani lost his job and got replaced by his former employee, Tommaso Portinari. The altar, created in Bruges, was supposed to be transported to Florence (actually to the church in Badia Fiesolana). At that time Portinari rented a huge ship named “San Metteo” to transport a significant amount of goods; Angelo Tani decided to take that opportunity and to ship his altar on „San Matteo”. The ship went first towards England and that caused a lot of troubles. At that time there was a trade war between England and the Hanseatic League. The biggest ship of Hanseatic League was called “Peter von Danzig”, and its captain was Paul Beneke, a famous privateer (basically it means a pirate to hire). He saw “San Matteo” going towards England; well, it was a ship with a neutral Burgundian maritime flag, but who cares! Wrong time, wrong place… “San Matteo” was captured on the April 27th 1473. The sailors from Gdańsk took over the goods in huge amount of 48 000 guldens; it was all later divided between the crew of “Peter von Danzig” and the patricians from Gdańsk, who owned that ship. Of course being a pirate doesn’t exclude piety: the altar was donated with all due respect to the Our Lady Church in Gdańsk. Probably as an apology for breaking the fifth and the seventh Commandments.

Of course, there were many protests after that theft. The Duke of Burgundy felt that his maritime flag was offended and threatened Gdańsk with the trade sanctions. The Italians demanded the return of their goods. Even the Pope decided to interfere and wrote a papal bull. Well, there was some fuss, but it finally passed… and the painting is still in Gdańsk.

Of course that would be too easy if it could just stay there for a half of millenium. At the beginning of the 18th century Tzar Peter the Great tried to get the altar, but he didn’t manage to force Gdańsk to give it up. Unfortunately, in 1807 the triptych was confiscated by Baron Vivant Denon, and added to the Napoleon collection in Louvre. When Napoleon was defeated, the altar was taken back to Berlin, where it underwent the restoration; after that Gdańsk had some troubles to get it back, but finally managed to do so in 1817. By the end of the World War 2 the Germans again confiscated Memling’s masterpiece and removed it to Thuringia. It was found by the Red Army and taken to Leningrad (Petersburg). The altar was kept in the Hermitage Museum and came back to Poland in 1956. It is now exhibited in the National Museum in Gdańsk.

In the middle part of the Last Judgement Triptych, we can see Christ returning at the end of time – sitting on a rainbow, surrounded by the Saints and the angels. Under that rainbow, the dead people are rising and the Archangel Michael is weighing the souls. In the left wing (that is on the Christ’s right), we can see those who are admitted to Heaven; in the right wing there is a Hell. There are young and old people depicted, men and women, and we can even see the Negros! And it is actually quite fair: we might see a black man going to Hell, but there is another one waiting for the Salvation. He is in fact the last one in the line, but still… it is a medieval political correctness. 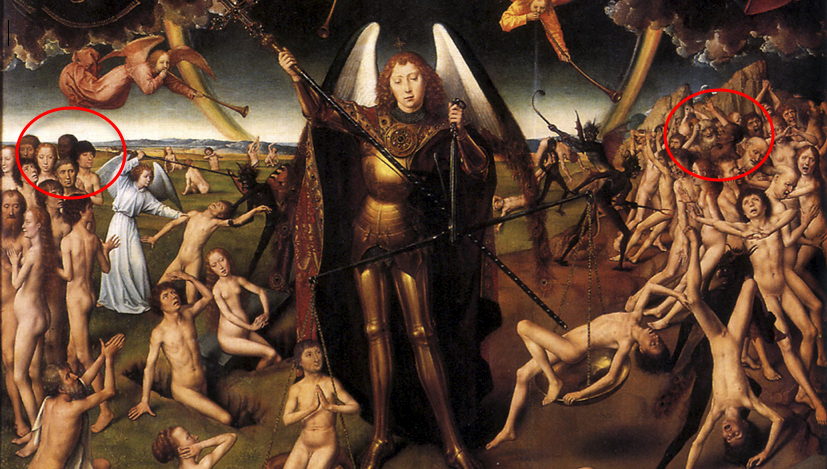 And there’s one more interesting detail: the soul on the weighing pan has a face of Tommaso Portinari (the co-worker of the donor who took over his job). We can establish that by comparing that face to the survived portraits of Portinari. And there’s more: his face in the Last Judgement has a different surface than the rest of the painting because it has been repainted! We know that in the 19th century they found a silver paddle in that place and the recent examination confirmed the presence of a piece of metal there. Probably it was placed to create a surface for repainting the face after the whole work was finished. It is likely that the change was completed when the altar was still in the Memling’s workshop. But why someone wanted such a change? Was it because Portinari had just been promoted to be the head of the branch? It must be noted, that the weighing pan balances towards Heaven (which is strange, as we might assume that Tani would rather see Portinari in Hell for taking over his job). On one of the painted tombstones there is an inscription, that looks like „367” – it is usually assumed that it refers to the year 1467, which could be the moment when the triptych was commissioned. That was the time when Angelo Tani founded the Saint Michael chapel in the church of Badia Fiesolana, and that church’s patrons were the Medicis. Maybe adding to the altar an image of the new chief of the Bruges branch of the bank was caused by the business interests? It looks like the Italian bankers consider business matters more important then the personal conflicts. 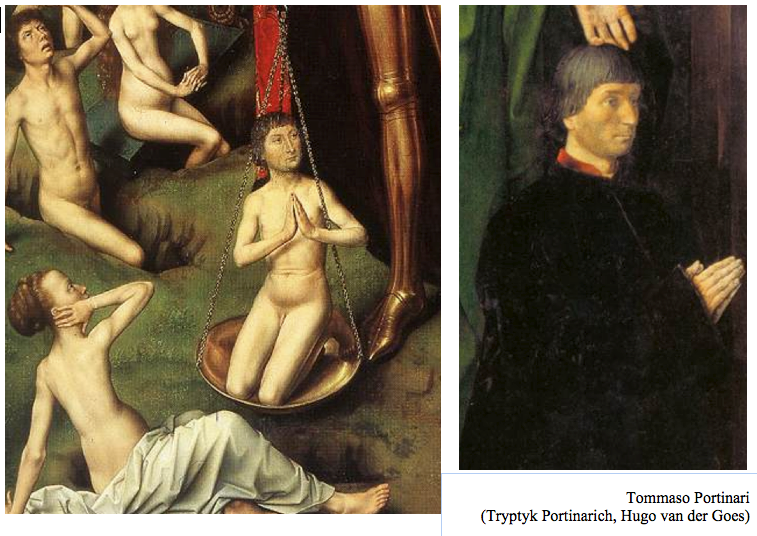 Additionally, there is a theory that suggests that one of the Apostles has a face of the Duke of Burgundy, Charles the Bold. It was actually 1467 when Charles became a new duke after his father died. It could be a way to „suck up” to the new duke and to persuade him to continue the cooperation with the Medici bank, as his father did. 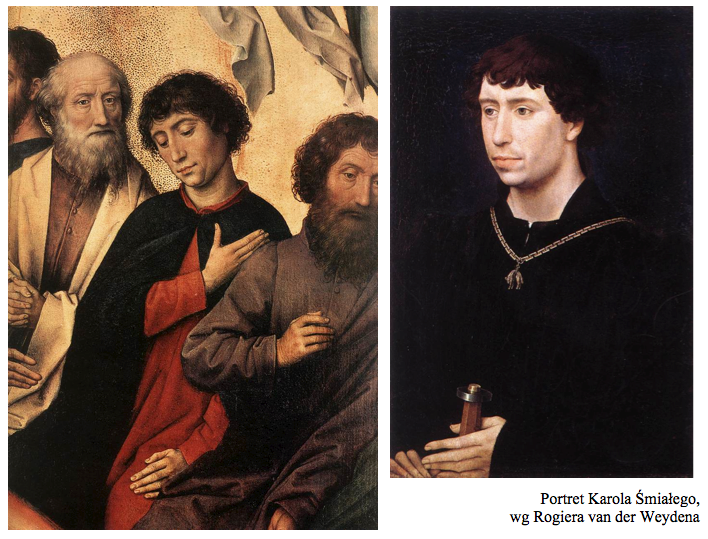 The altar underwent many examinations: the underdrawing shows a style that resembles the works of Rogier van der Weyden. We know that initially the image of Hell was supposed to be more drastic… and in fact, there are no documents that would undoubtedly prove that the author of this masterpiece is Hans Memling. The discussions are still open…

It is a famous masterpiece and still many questions need to be answered. It is for sure a great piece of European art and it’s nice to have it in the National Museum in Poland, even if it was in fact stolen. I think we could consider returning it if we could get back the Neapolitan Sums (a 430,000 gold ducat loan taken by King Philip II of Spain from Poland’s Queen Bona Sforza, which was never paid back). Adding the interest for the last 458 years, of course.