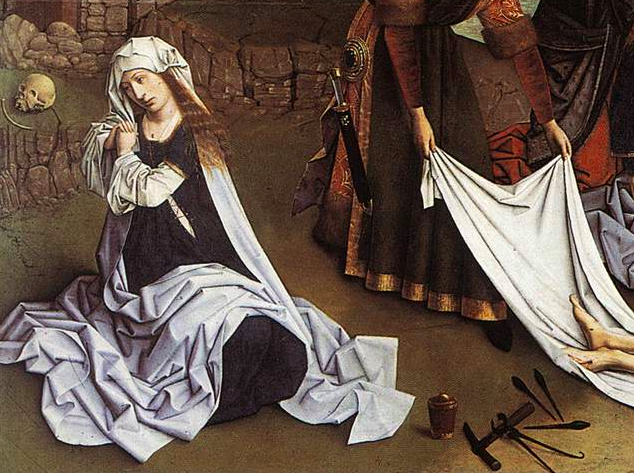 Saint Mary Magdalene is a controversial biblical character. For all the readers of Dan Brown’s books she is a woman whom Christ loved and who gave birth to His child. But the fact is that lots of the statements present in Brown’s fiction are impossible to accept from the point of view of the scientist. Anyway, Mary Magdalene was indeed a person of interest in Early-Christians’ discussions. Gnostic Gospels saw Mary Magdalene as the special disciple of Jesus who had a deeper understanding of His teachings and as a result she was understood as a personification of God’s Wisdom. In apocryphal Gospel of Philip one may read that “Christ loved Mary more than all the disciples, and used to kiss her often”. Of course, serious scholars tend to avoid such tricky subjects. But what should the art historian do when he or she looks at the gothic painting that depicts Mary Magdalene and see a pregnant lady?

Let’s start with a question: how can we tell if a woman depicted in the medieval painting is actually pregnant? It is not the question of her figure. Medieval beauty models assumed that a woman should be thin but she should have noticeable round belly, so in the gothic paintings even the virgin saints look as if they were pregnant. What is crucial in such case is a detail of clothes. The 15th century fashion has actually been depicted quite precisely, especially in the Netherlandish paintings. Back then the dresses should have been tight in upper part. Typical dress was laced at the front or on the sides. When a woman was pregnant she could gradually loose the lacings so the dress expanded. There are depictions of such solution in art – for example, in Visitation by Rogier van der Weyden (ca 1445, Museum der Bildenden Künste, Leipzig) one might notice opened lacing on the side of pregnant saint Elisabeth: 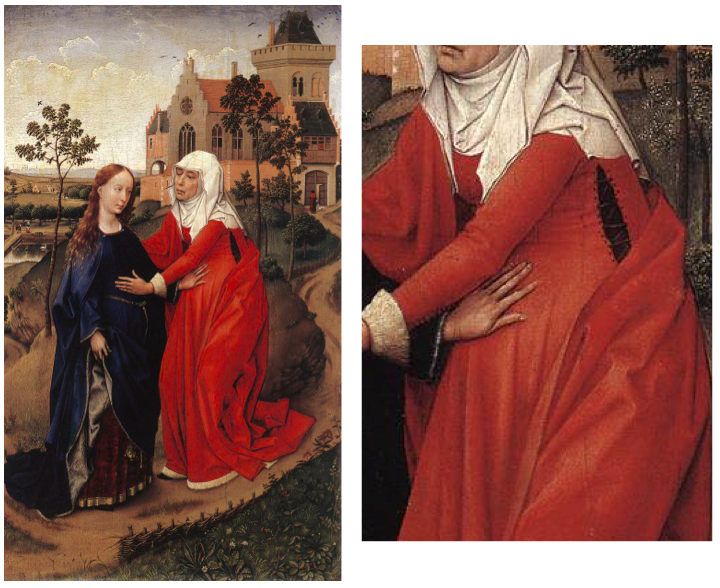 Such dresses were also used by the women who just gave birth. In the Vienna panel showing The Massacre of the Innocents by Master of the Schottenaltar (1467-75, Schottenstift Museum, Vienna) we can see two mothers. One has her red dress unlaced at the front and the other has her dress laced on the side: 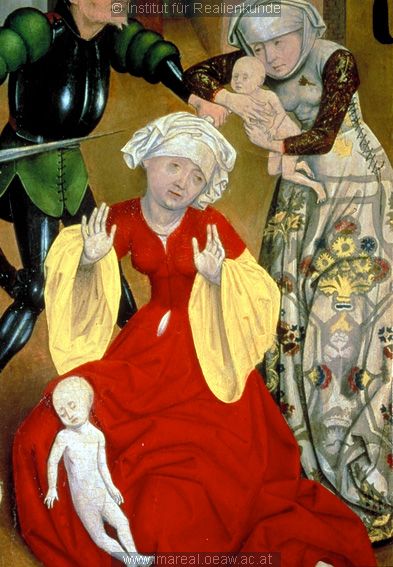 So, as we are familiar with the maternity clothes of the 15th century now, we can focus on some depictions of saint Mary Magdalene. It actually looks like sometimes she was indeed depicted as pregnant! For example, she is a lady in red and obviously unlaced dress it the Deposition by Dirk Bouts (Passion Altar, Museo de la Capilla Real, Granada): 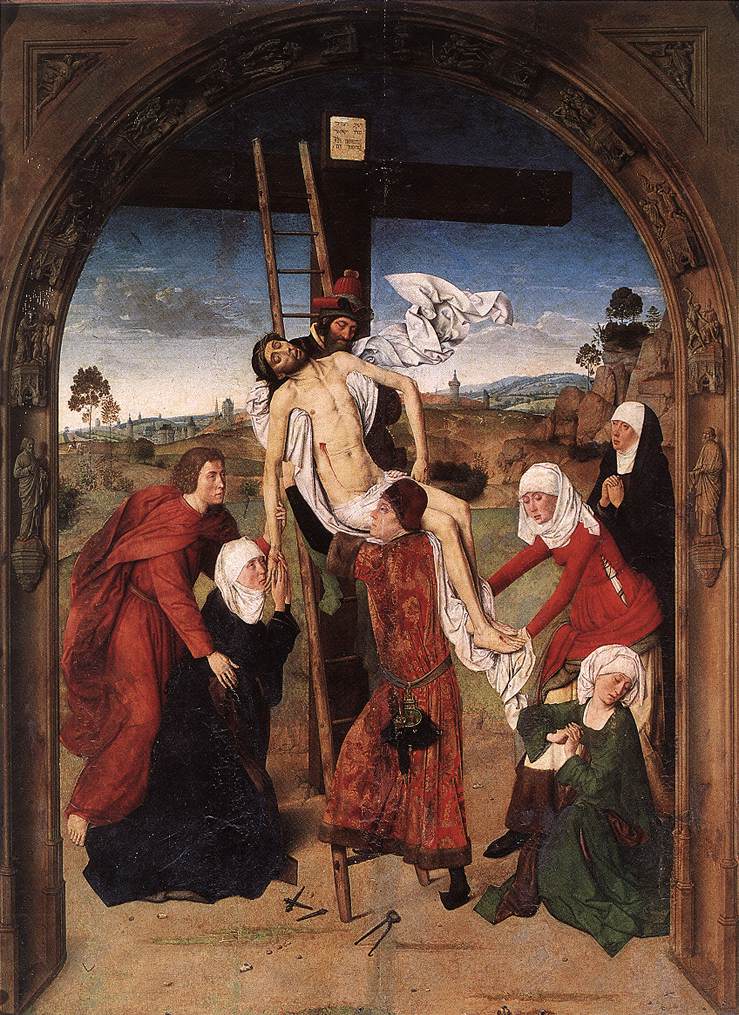 Another example is Lamentation attributed to Petrus Christus (ca 1455-60, Royal Museums of Fine Arts of Belgium in Brussels). By the left side of this panel one might see a lady in blue dress and she is obviously pregnant. Also there is a jar on the ground close to her, so we can be sure it is saint Mary Magdalene, as it is her attribute. 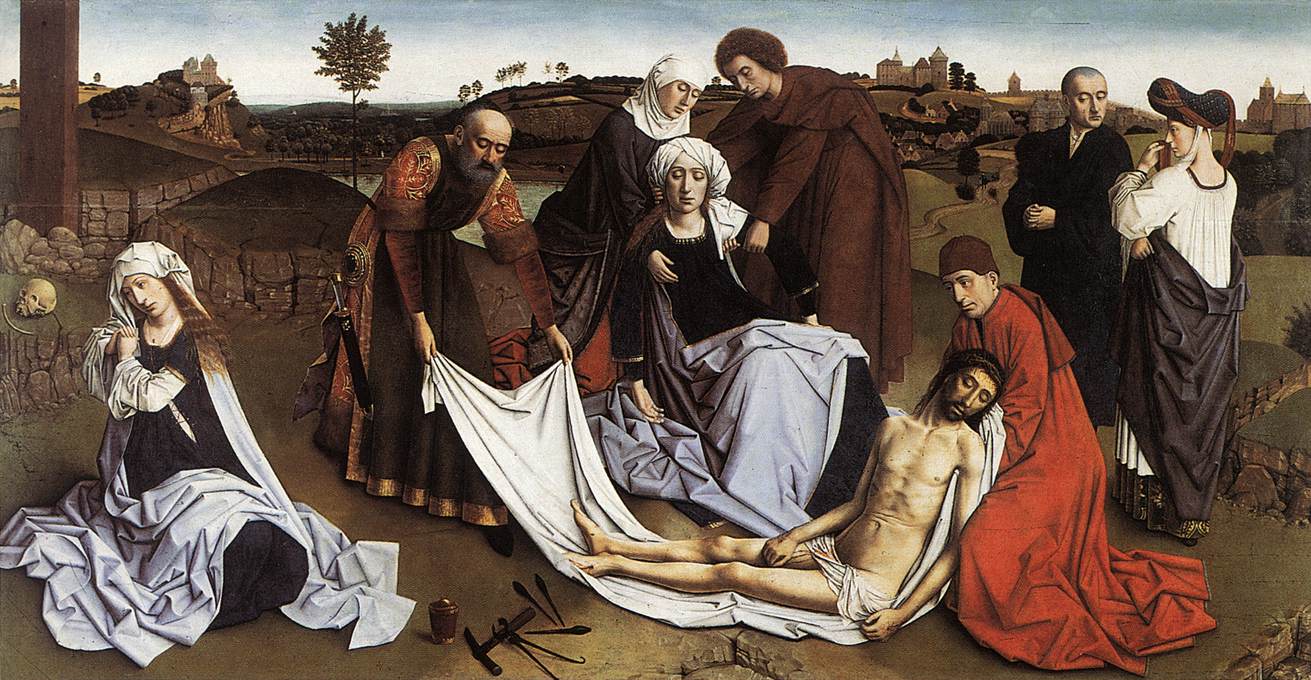 And another example, maybe less obvious, but much more famous: it is Descent from the Cross by Rogier van der Weyden (before 1443, Prado, Madrid). At first it doesn’t seem as if Mary Magdalene was pregnant there, but wen we get a closer look we will notice that her dress has the maternity laces at the front. Her rounded belly is decorated with the belt with an engraved inscription that says JHESUS MARIA – as if the unborn child was described with the names of its parents:

Does it all mean that 15th century Netherlandish artists believed in an affair between Mary Magdalene and Jesus? Not necessarily. There is actually an interesting interpretation by professor Penny Jolly, who examines a metaphor of Mary Magdalene’s spiritual pregnancy. As a sinner-saint Mary Magdalene is a complex, and multivalent figure, both prostitute and a closest woman to Christ. Her pregnancy is considered to symbolize her own rebirth and renewal in terms of her moral and spiritual transformation. On the other hand, her ‘pregnant’ body stresses the carnality of her sin. There are medieval sources, such as the 12th century Vita Beatae Mariae Magdalenae et Soraris eius Sanctae Martha, or  the late-medieval play of Mary Magdalene, which use the metaphor of fertility in the narrative of the saint’s spiritual transformation. Also, sinner-saint Mary Magdalene could simultaneously represent both Wise and Foolish Virgin of the Parable of the Ten Virgins from the Gospel of Matthew. As a Wise Virgin she becomes a spiritually pregnant mystical Bride of Christ, the Bride in the Song of Songs, which is usually understood as a personification of the Holy Church. It is commonly assumed that Virgin Mary is a personification of the Church (mystical Christ’s Bride), but maybe also Mary Magdalene could be understood this way. She surely does impersonate the sinful humanity that become saint thanks to Jesus’ love. 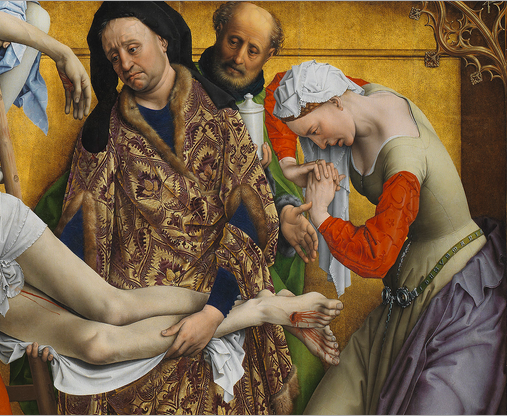 Anyway, such tricky subject should not be avoided by the historians of art. Late medieval art if full of strange depictions that are not always completely pure in their theological meaning – and that is why it is so fascinating! It is possible that those paintings bare complex symbolical meaning, or maybe some people back then indeed thought that Mary Magdalene was actually pregnant. Who’s the father? That is a different issue. We must remember that Magdalene was a biblical Jewish woman, and it is said that one is a Jew if one has a Jewish mother, as the father is never certain. That truth in fact hasn’t changed for the centuries.

If you are interested in details of the analysis made by professor Jolly, check out her latest book: Penny Howell Jolly, Picturing the ‘Pregnant’ Magdalene in Northern Art, 1430-1550: Addressing and Undressing the Sinner-Saint (Farnham and Burlington: Ashgate, 2014). You will also find there more information on how to identify a pregnant woman in medieval art, about maternity dresses, and other examples of pregnant Mary Magdalene.