Risen with the tools 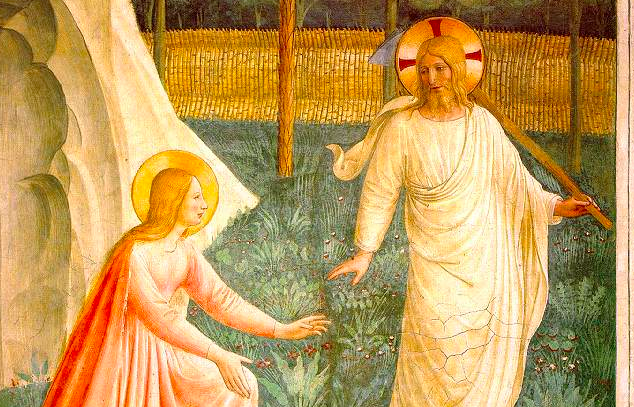 None of the Gospels describes an actual moment of Christ’s Resurrection. The Gospels of Saint Matthew, Saint Mark and Saint Luke just say that the women who came to the Jesus’ sepulchre found it empty and saw an angel (or two angels) who told them that the Lord had risen. Saint Mark also wrote that: “Having risen in the morning on the first day of the week, he appeared first to Mary of Magdala” (Mark 16:9). 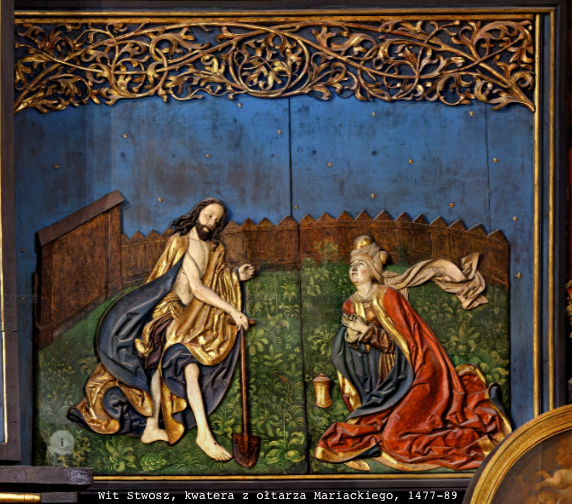 A bit different description might be found in the Gospel of Saint John. According to him, Mary Magdalene found the sepulchre empty and alarmed Peter and John, who immediately went to the tomb and realized that Christ is indeed gone. As the Gospel says:

“But Mary was standing outside near the tomb, weeping. Then, as she wept, she stooped to look inside, and saw two angels in white sitting where the body of Jesus had been, one at the head, the other at the feet. They said, ‘Woman, why are you weeping?’ ‘They have taken my Lord away,’ she replied, ‘and I don’t know where they have put him.’ As she said this she turned round and saw Jesus standing there, though she did not realise that it was Jesus. Jesus said to her, ‘Woman, why are you weeping? Who are you looking for?’ Supposing him to be the gardener, she said, ‘Sir, if you have taken him away, tell me where you have put him, and I will go and remove him.’ Jesus said, ‘Mary!’ She turned round then and said to him in Hebrew, ‘Rabbuni!’ — which means Master. Jesus said to her, ‘Do not cling to me, because I have not yet ascended to the Father. But go to the brothers, and tell them: I am ascending to my Father and your Father, to my God and your God.’ So Mary of Magdala told the disciples, ‘I have seen the Lord,’ and that he had said these things to her.” (John 20:11-18) 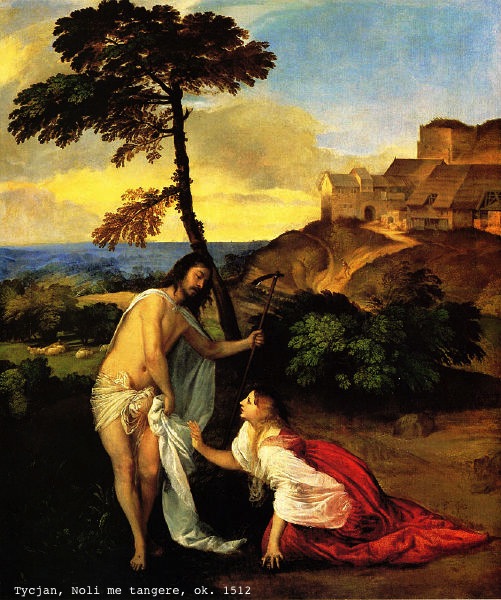 And that is the source of the depiction called “Noli me tangere”, which means “do not touch me” (nowadays translated as “Do not cling to me”). That is in fact the first time Christ appeared after the Resurrection, and He met Mary Magdalene. For the centuries the artists showed this scene, depicting Mary Magdalene in the garden, as she kneeled in front of the Risen Lord. Sometimes Christ in those pictures holds the banner of Resurrection, but usually He has a hoe in His hand! Well, it also might be a shovel. Rarely we can even find a version with a rake.

The source of such a motif is hidden in one fragment of the Gospel: “Supposing him to be the gardener”. If Mary Magdalene assumed Jesus was a gardener, He must have walked around with some tools… and that explains why the Risen Lord holds such a strange item. Sometimes He even wears the gardener’s hat that keeps off the sun! 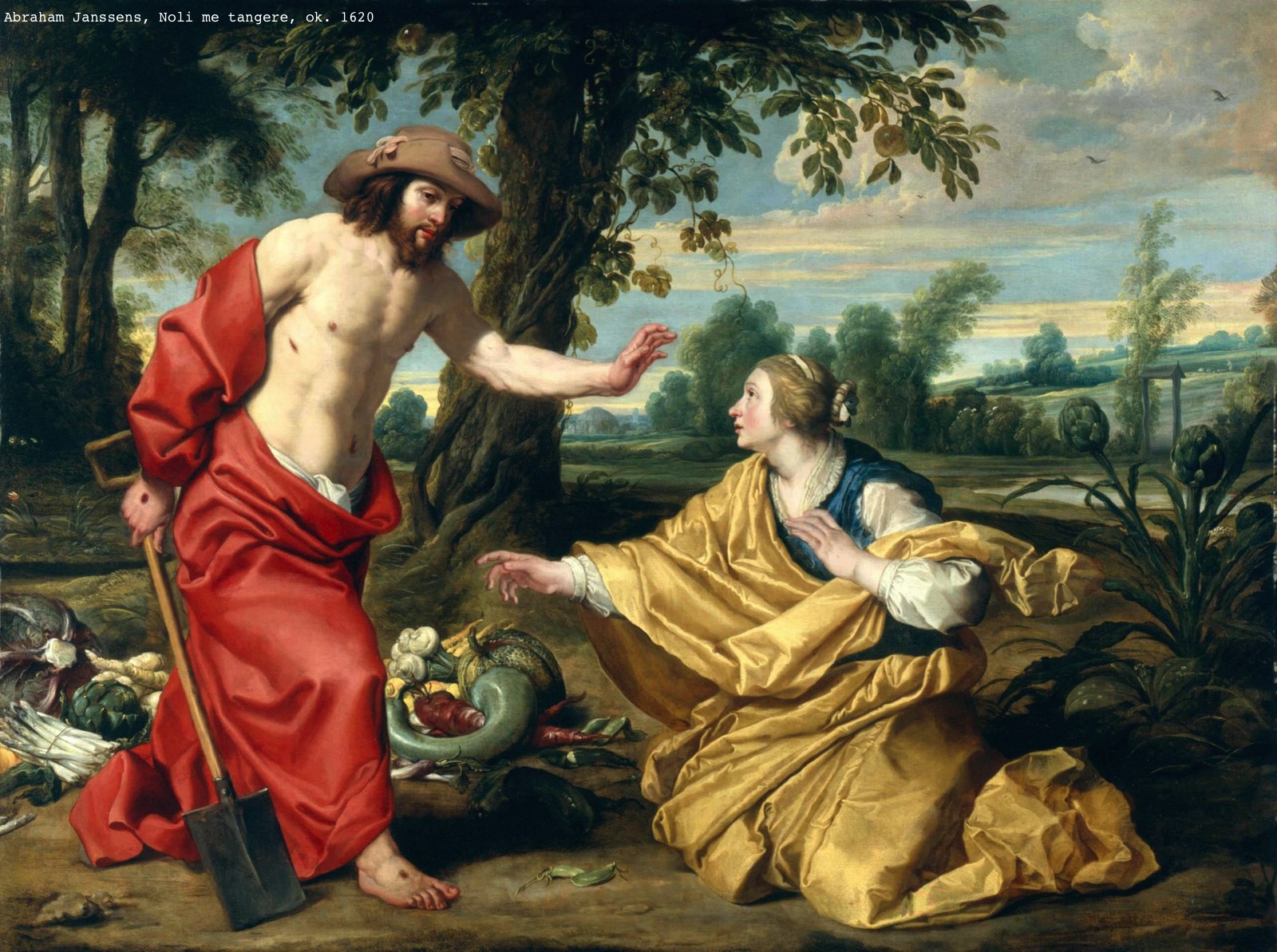 The details in the old paintings are fascinating, they are often surprising but always have their explanations. By the way, the Risen Lord leaning on a shovel might be a patron of the road workers. They also tend to lean like this, with a look of far off wonderment. 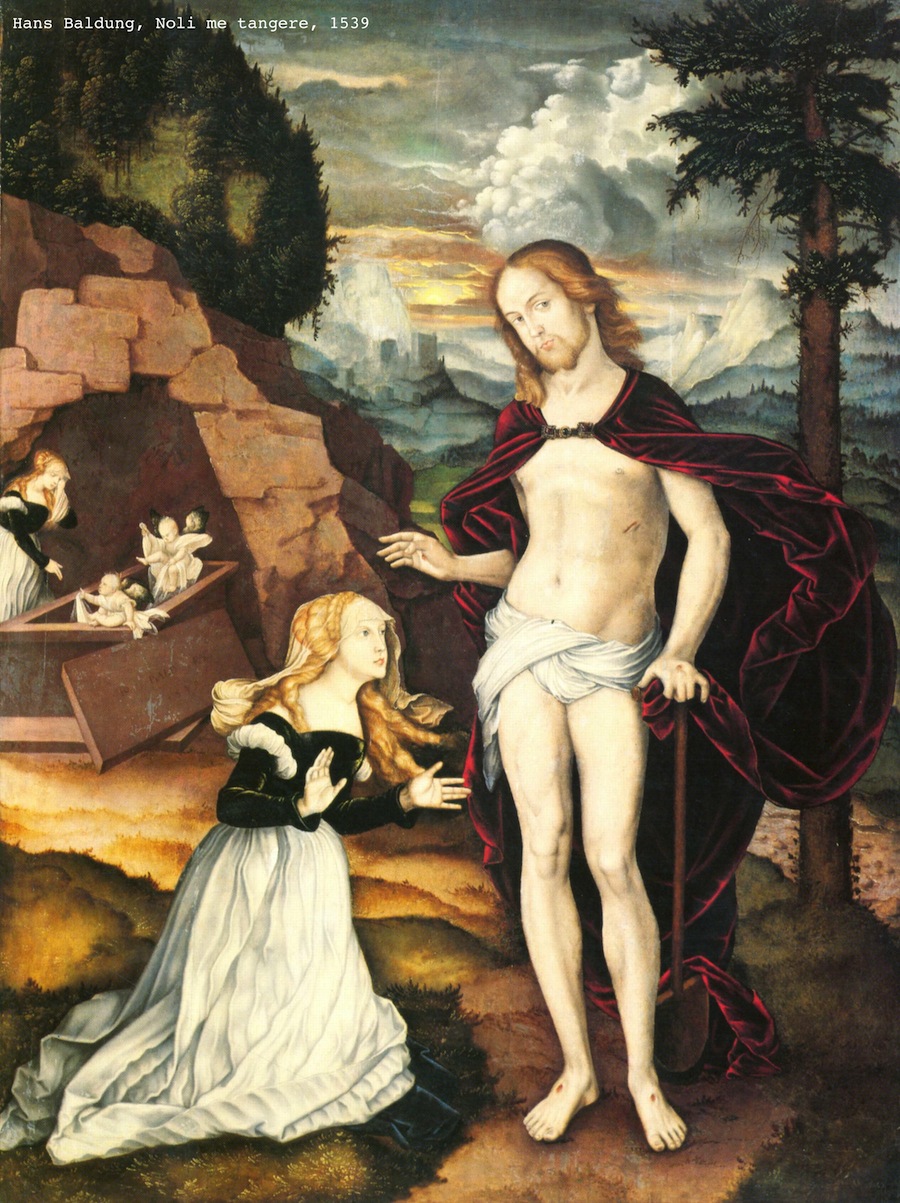