Recently I had a pleasure to visit (last-minute visit, just before it closed) exhibition “Falza? Falza!” (“Forgery? Forgery!”) at the National Gallery in Prague. Among artworks on loan there were some famous forgeries by Han van Meegeren (I wrote about those earlier, HERE).

The exhibition presented various – however somehow related – aspects of copies, imitations and forgeries. We often tend to assume that the artwork is either “original”, or not; meanwhile, it is not so simple. The painters often produced copies of their own best-sellers; it was also quite common for rich donors to commission copies of some famous pieces (and no-one assumed that violated some copyrights, nor did they consider such a copy less valuable). An excellent example (not from the Prague exhibition, though) is Miraflores Altarpiece by Rogier van der Weyden (in Staatlichen Museen in Berlin), the copy of which, completed several decades later (divided between Capilla Real in Granada and Metropolitan Museum of Art in New York), differs from the original seemingly pretty much only in size and shades of colours. For many years scholars assumed that the paintings in Granada and New York are originals, while in Berlin there is a copy; it turned out it is actually the other way round, which was finally proved by the technological examination (such as dendrochronological exams, dating age of wooden boards on which the paintings were painted)! (for more on this subject check out an article by Katrin Dyballa and Stephan Kemperdick, available HERE). 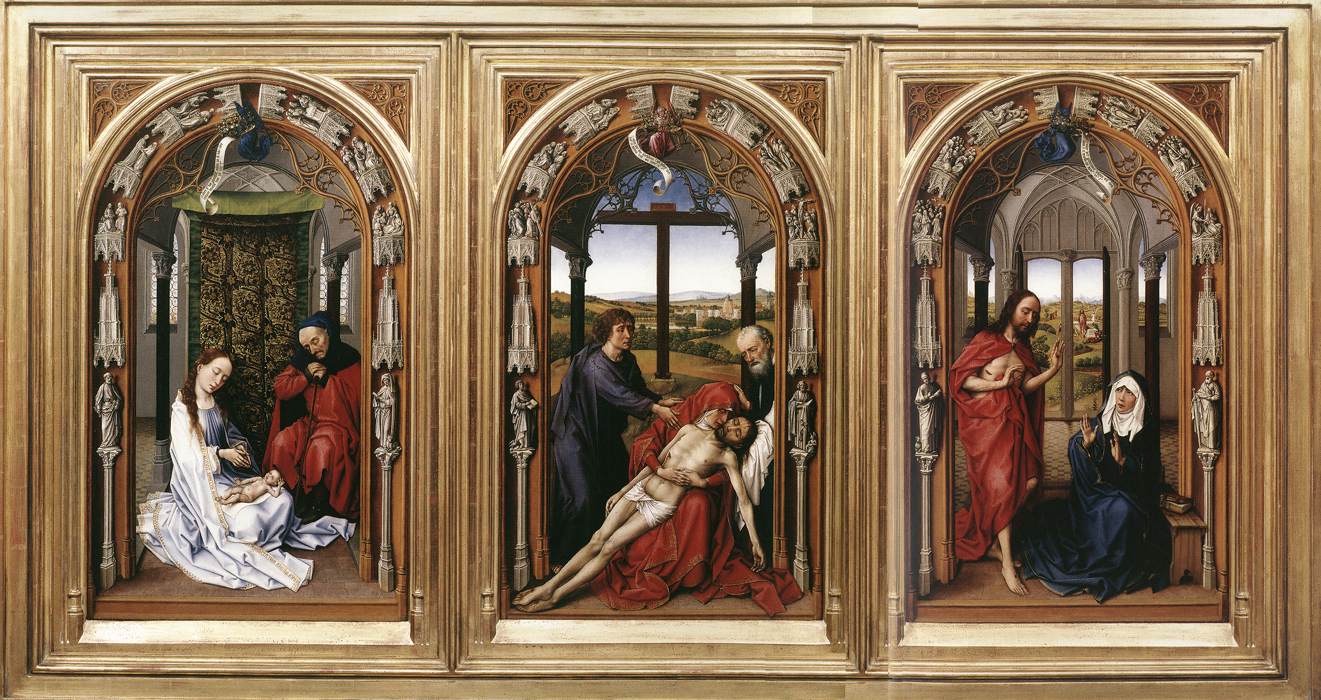 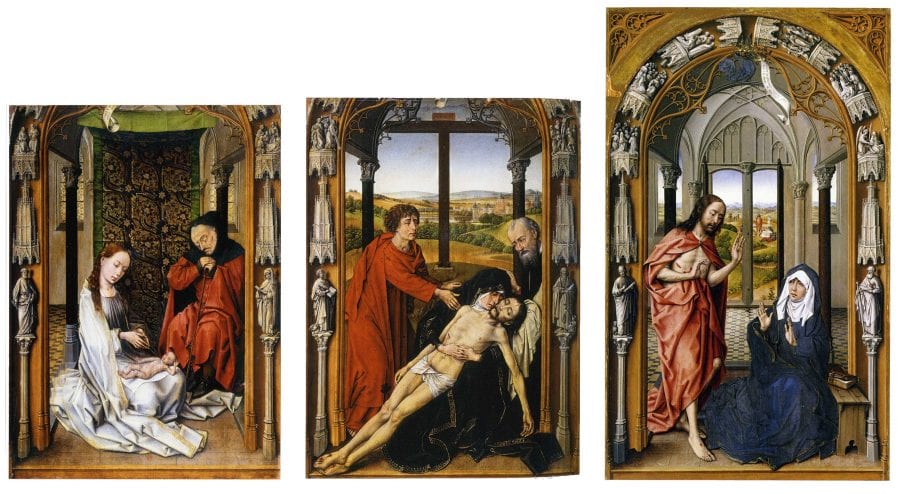 Miraflores Carthusian monastery near Burgos was funded by king John II of Castille in 1441; surviving sources confirm that the king donated the altar in 1445. Meanwhile, the copy was commissioned by John II of Castille’s daughter, Isabella I of Castille, ca. 1500. After her death in 1504 the altarpiece ended up in Capilla Real in Granada. 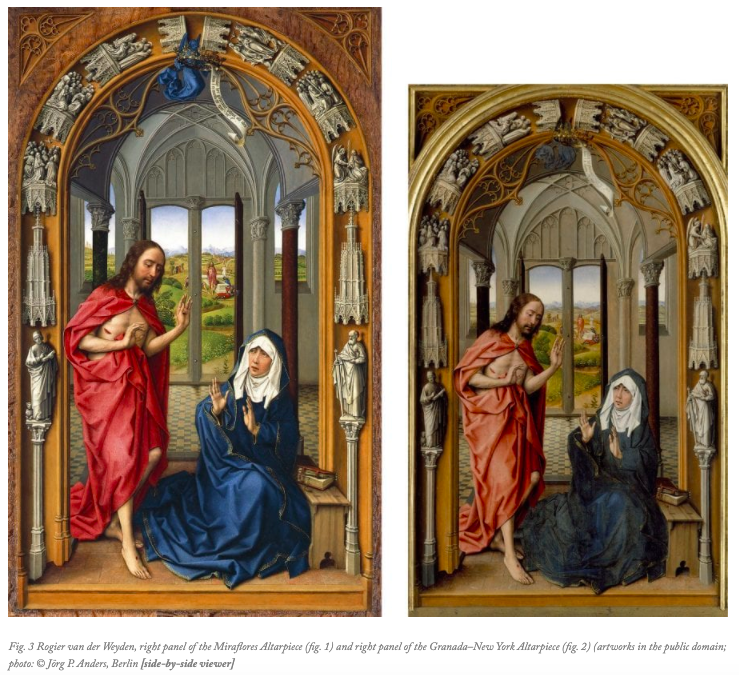 Such a case does not count as forgery; in fact centuries ago author’s rights were not understood as they are today. Making copies after famous artworks was considered a praise. However, there were some exceptions of that rule; one of the first artists concerned about his copyrights was Albrecht Dürer. He signed his works with characteristic monogram (a letter “D” inside a letter “A”), and he was so famous, that this monogram increased value of any print on the market… Italian draughtsman Marcantonio Raimondi (ca. 1480-before 1534) made quite a lot of money on selling copies after Dürer’s prints (he also created some erotic prints, about which I wrote HERE, but that’s a different story). No wonder that Dürer got irritated: not only he had no profit of those sold copies of his works, but also he was aware that some of those works, believed to be his, are not meeting his artistic standards. Prints by Dürer and by Raimondi were also present at the exhibition in Prague. 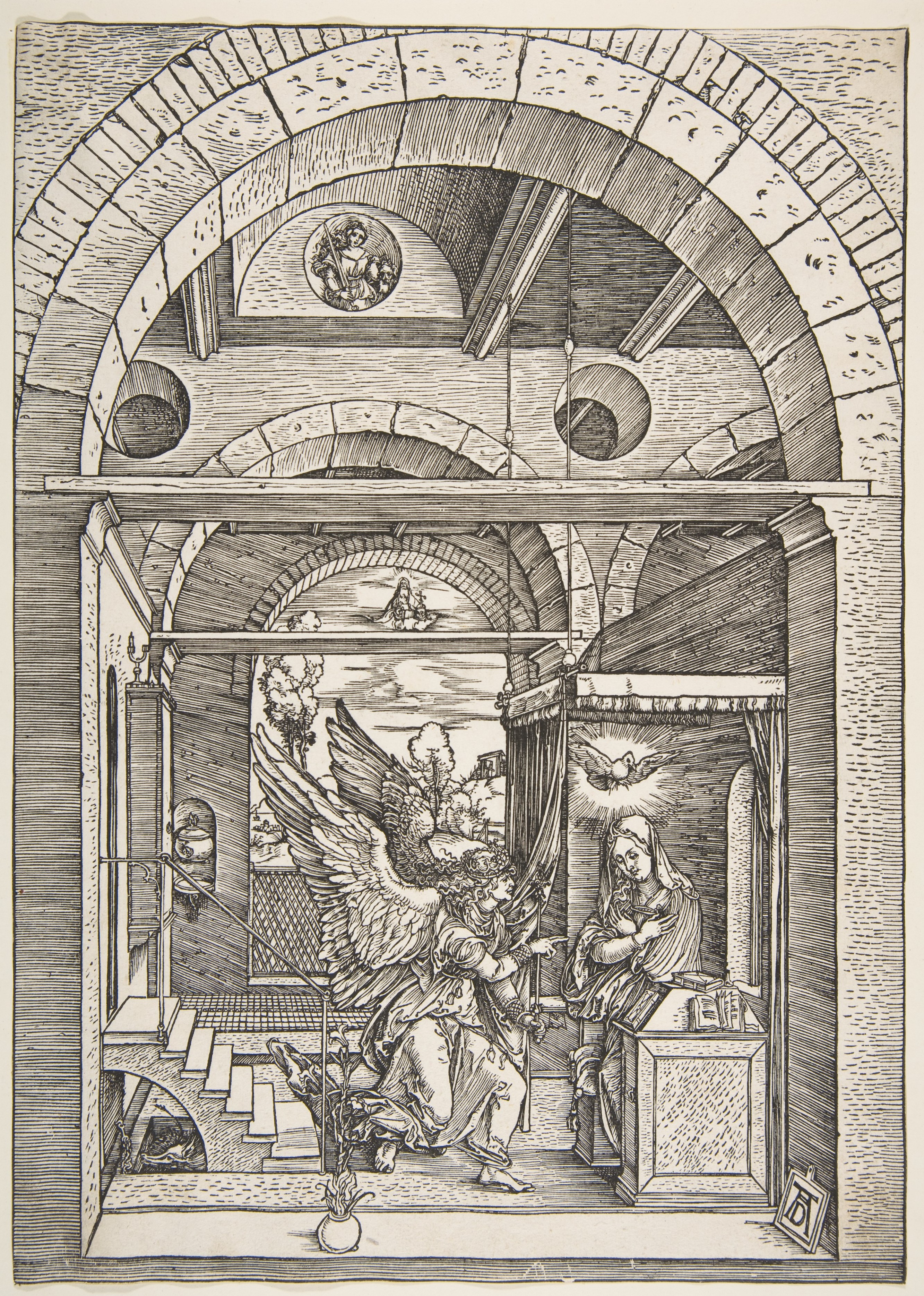 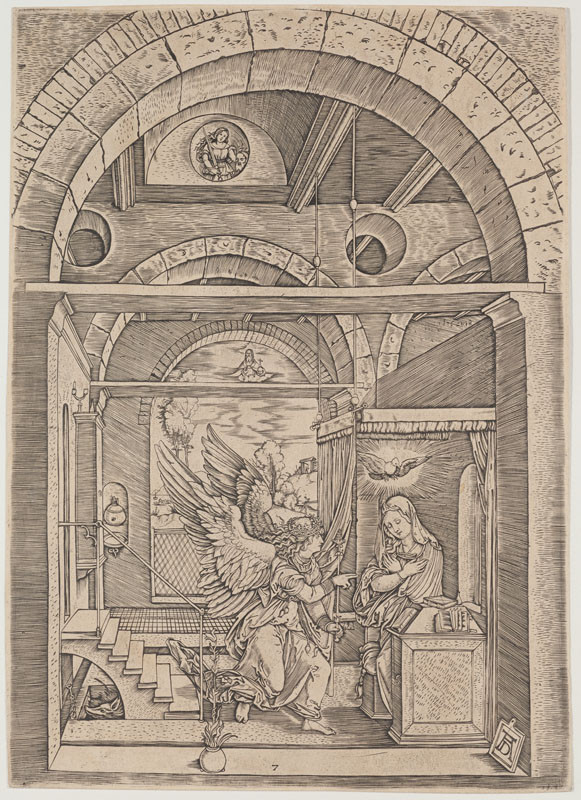 In 1511 Dürer achieved a special privilege from the Emperor Maximilian I, which forbade copying artist’s works and selling them. Unfortunately there were no legal instruments to execute this law. Dürer remained the most copied (and forged) artist – not only during his lifetime, but also after death. At the turn of the 16th and 17th centuries there was even so called “Dürer-Renaissance”, as many copies and forgeries of Dürer’s works were created back then. It was related to the fact that the Emperor Rudolph II (1552-1612) as well as Bavarian dukes William V (1548-1626) and Maximilian I (1573-1651) engaged themselves in a kind of contest: who would collect more works by Dürer. Hence the immense popularity of Dürer’s artworks at the courts in Prague and in Munich; of course in those circumstances some people started to sell forgeries. This is the case of one of the paintings from the National Gallery in Prague: „Mocking of Christ”, most likely by Hans Hoffmann (d. 1591/92), signed with Dürer’s monogram and the date 1520, which makes it a forgery. 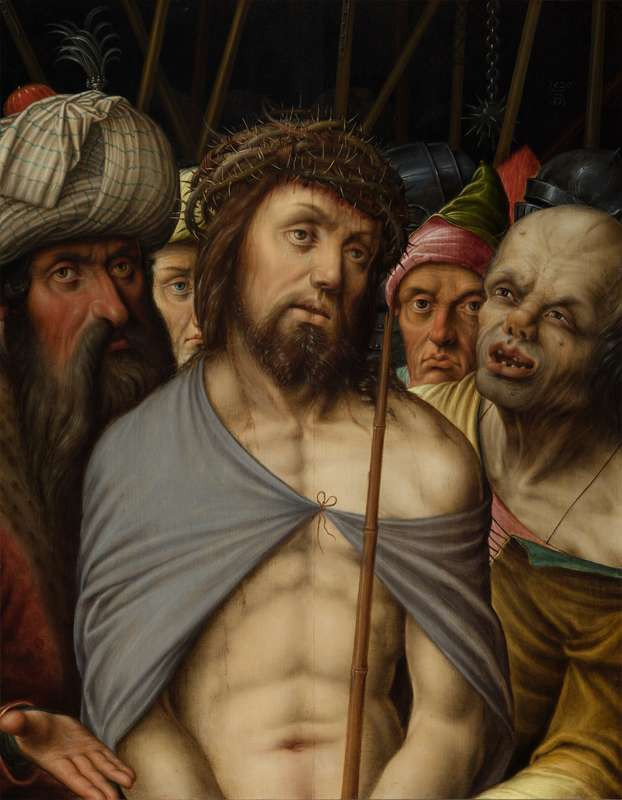 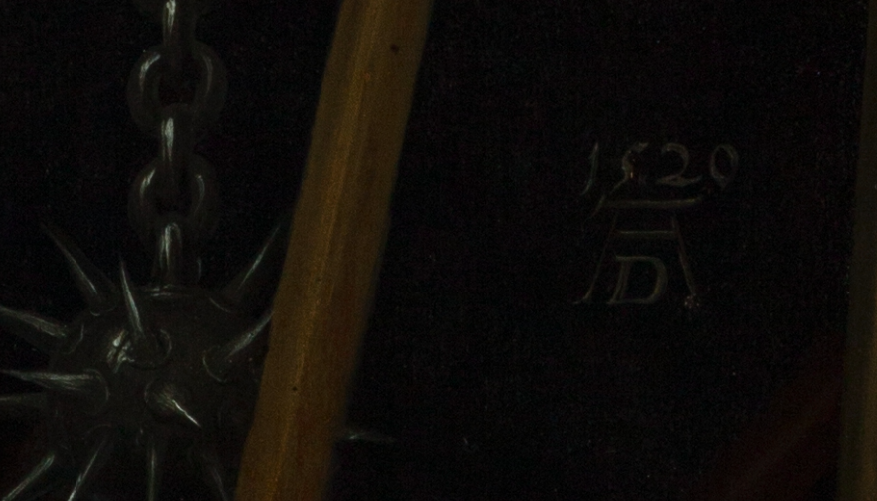 Demand on imitations (and forgeries) of Old Masters’ artworks significantly increased in the 19th century, due to popularity of historicism, especially Gothic Revival. Many aristocrats, fascinated with the culture of the Middle Ages, wanted to have medieval-like castles, and of course they also insisted on decorating them with Gothic pictures: imitations, originals, and sometimes – “originals”. A part of the exhibition in Prague was dedicated to artworks created for Archduke Franz Ferdinand of Austria (killed in 1914 – his assassination started WWI). He was especially fond of depictions of St George, patron of knights, as he liked to consider himself a knight. It is difficult to say in how many cases the Archduke was aware that his purchases were not genuinely medieval; probably at least in some cases he was deceived by forgers. 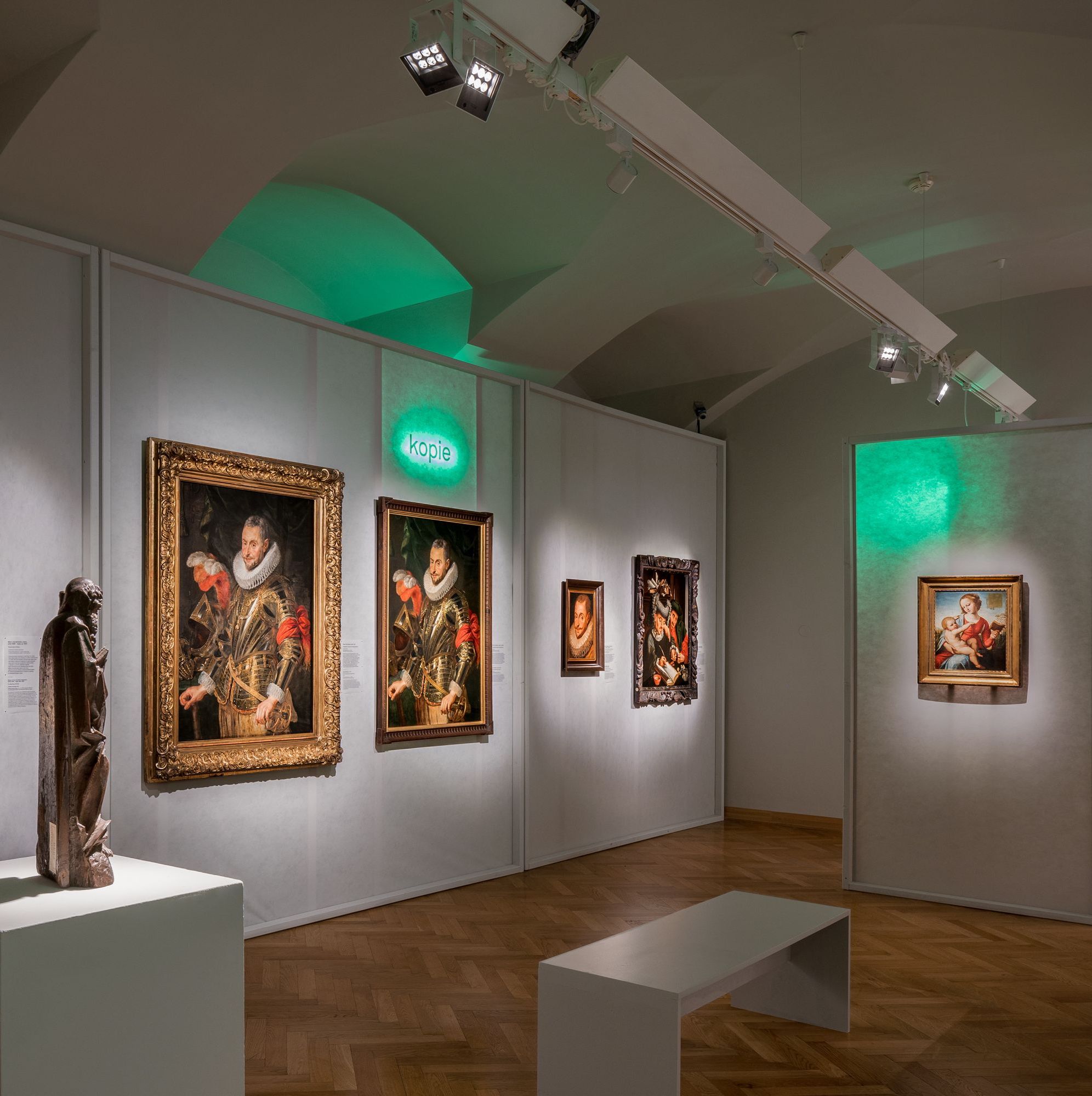 In the past the decision whether certain piece was an original or not was based almost solely on the opinion of an expert and his “eye”. Nowadays we have advanced technological instruments: we can e.g. run chemical examinations of pigments, or determine age of the wooden boards of the painting, which often reveals forgery invisible to an eye of any expert.

In the collections of most of museums there are many copies and imitations, and sometimes also forgeries, but usually those pieces are kept out of the exposition. Meanwhile, an exhibition of such artworks may be really interesting, as they represent quite a significant aspect of visual culture of past epochs (after all, artworks copied or faked are usually the ones that were considered the most desirable at certain times).

And so, I hope that the other museums would one day stop hiding those artworks in their magazines – after all, sometimes creating a good forgery requires even more artistic skills than producing an original. So why do we still assume that copies, imitations and forgeries are worthless?