Home » Blog » Temperaments, zodiac and the “children of planets”
Mon31

Temperaments, zodiac and the “children of planets” 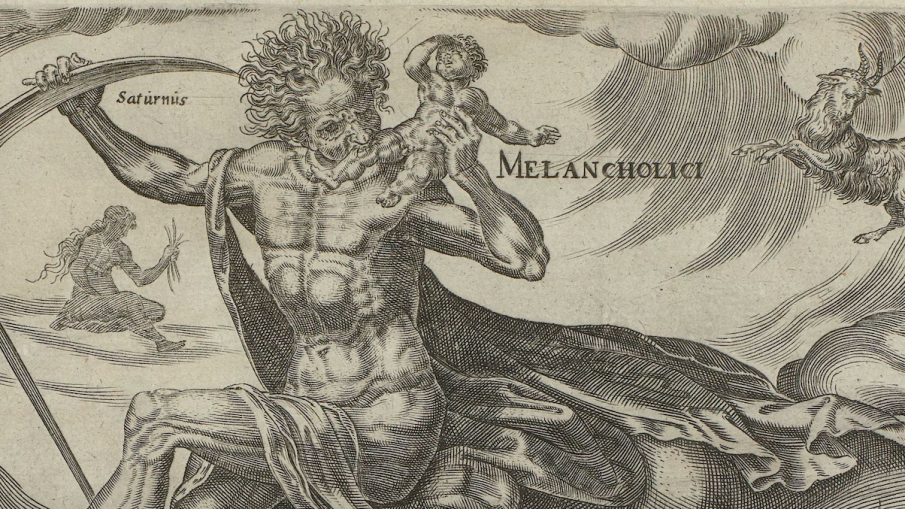 January, or more generally – the beginning of a New Year – is the time when I want to talk about medieval calendars, or wider: about various ideas of visualising passing of time, often interlaced with astrological subjects. I have once written about depictions of two-faced god Janus, after whom the first month of the year was named (Latin Ianuarius – post available HERE). Today I decided to write about strangely tangled issues concerning the elements, zodiac, planets and temperaments, and how all of that was said to affect people and their behaviour.

Medieval and Early Modern ideas about time, world and cosmos had ancient roots. European visual culture throughout the centuries was fixated over the concept of four: four seasons, four elements, four temperaments. I have written about the temperaments before (choleric, sanguine, phlegmatic and melancholic – post available HERE). Each element was paired with three signs of zodiac, and a temperament, which was also connected with a certain planet. All together in the medieval system there were seven planets (Mercury, Venus, Mars, Jupiter, Saturn, as well as Sun-Sol and Moon-Luna), but chosen were patrons of particular temperaments.

A very interesting cycle of prints, depicting planets in reference to four temperaments, was published in Antwerp in 1566 by Harmen Jansz. Muller, after Maarten van Heemskerck. Each print depicts an ancient deity impersonating a planet, inscribed as a patron of a certain temperament. In the sky we may see three signs of zodiac for each print, while lower, on earth, the artist depicted people engaged in various activities. Those are so called “children of plants”: it was believed that people born under influence of a certain planet had certain temperament, and therefore were destined for certain jobs and occupations. For example, people of choleric temperament tend to be aggressive, so they make good soldiers, while the ones of phlegmatic temperament – who are quite patient – enjoy fishing.

So let’s take a look at the prints of this cycle. Each of them contains Latin inscription explaining the image. 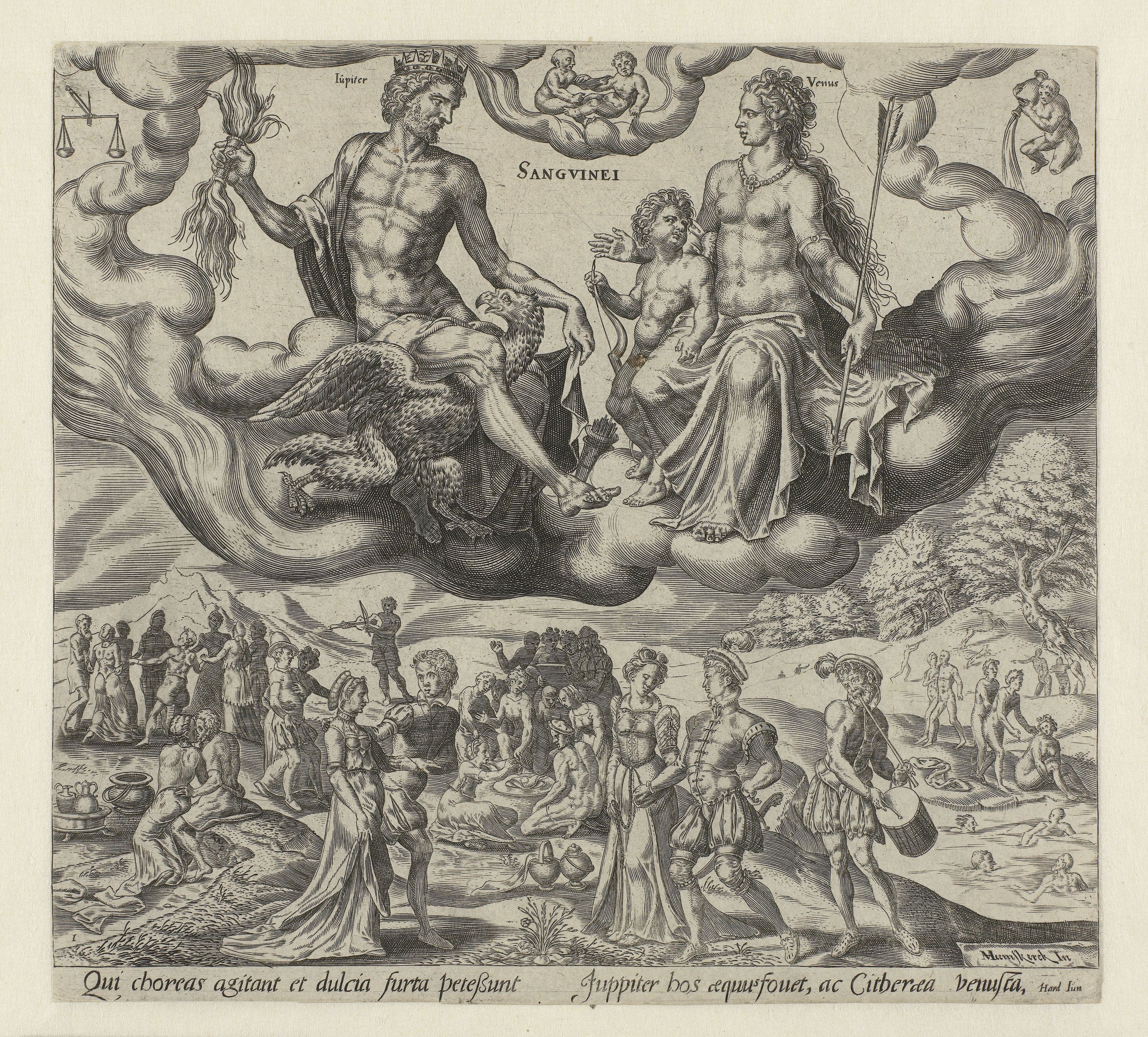 Sanguine temperament was supposed to be the result of the excess of blood in one’s organism. Sanguine people were said to be cheerful and pleasure-oriented. They live under dominance of Venus and Jupiter – they dance, court, eat, drink and bath (as the inscription reads: Qui choreas agitant et dulcia furta petessunt / Juppiter hos aequus fovet, ac Citheraea venusta). Genereally it was believed that people of sanguine temperament find their occupation in art, goldsmithery, trade of luxury goods and beautiful fabrics.

We may also see three zodiac signs ascribed to the element of the air (which was an element of sanguine temperament): Libra, Gemini and Aquarius. 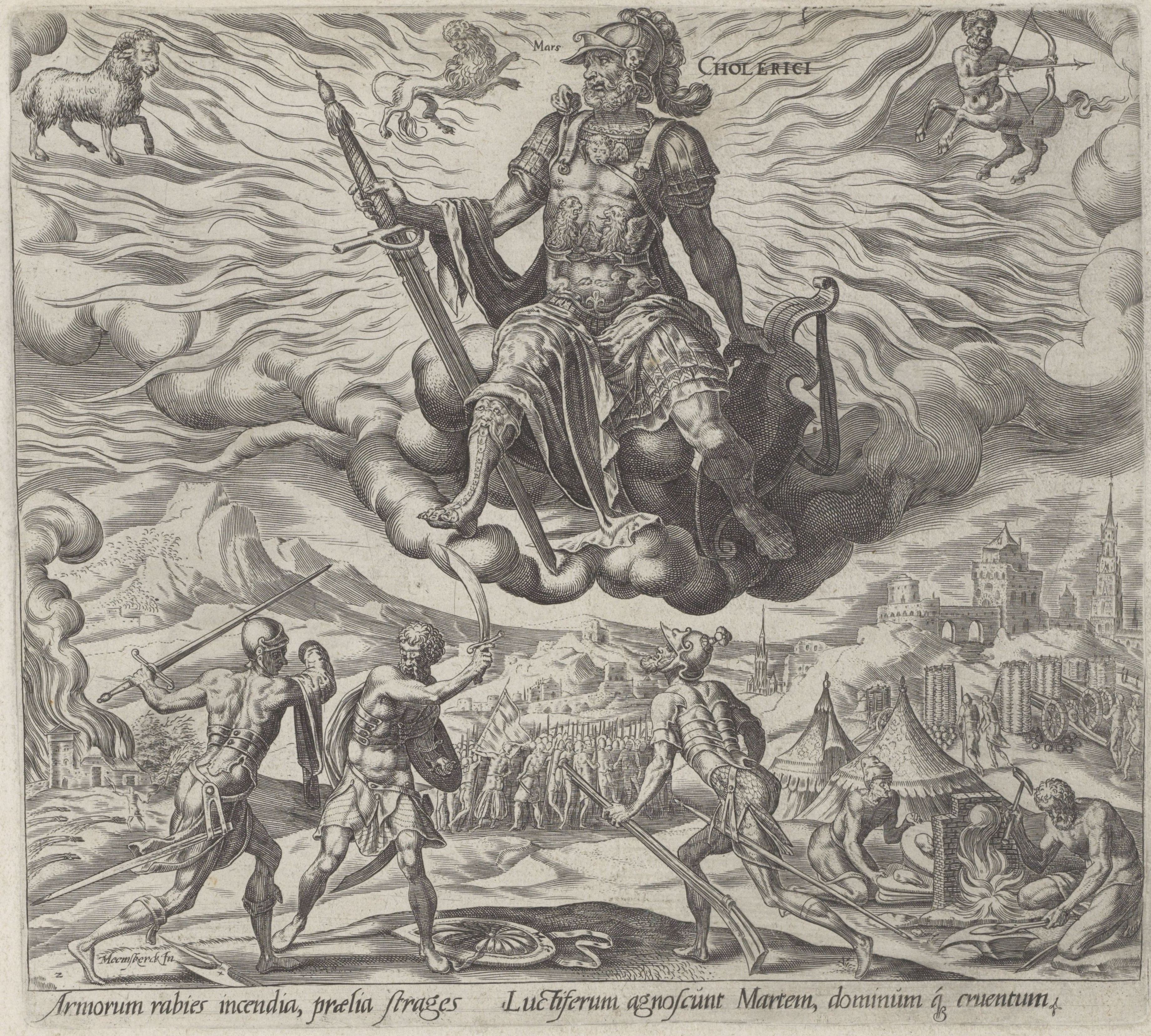 The second print depicts Mars, the god of war, and patron of choleric temperament. His element is fire; the choleric temperament comes from exceed of yellow bile. “Children” of this planet are mainly soldiers, but also people producing weapon and armours, as well as smiths, working with fire (Armorum rabies, incendia, praelia, strages / Luctiferum agnoscunt Martem, dominumque cruentum). Appropriate zodiac signs are Aries, Leo and Sagittarius. 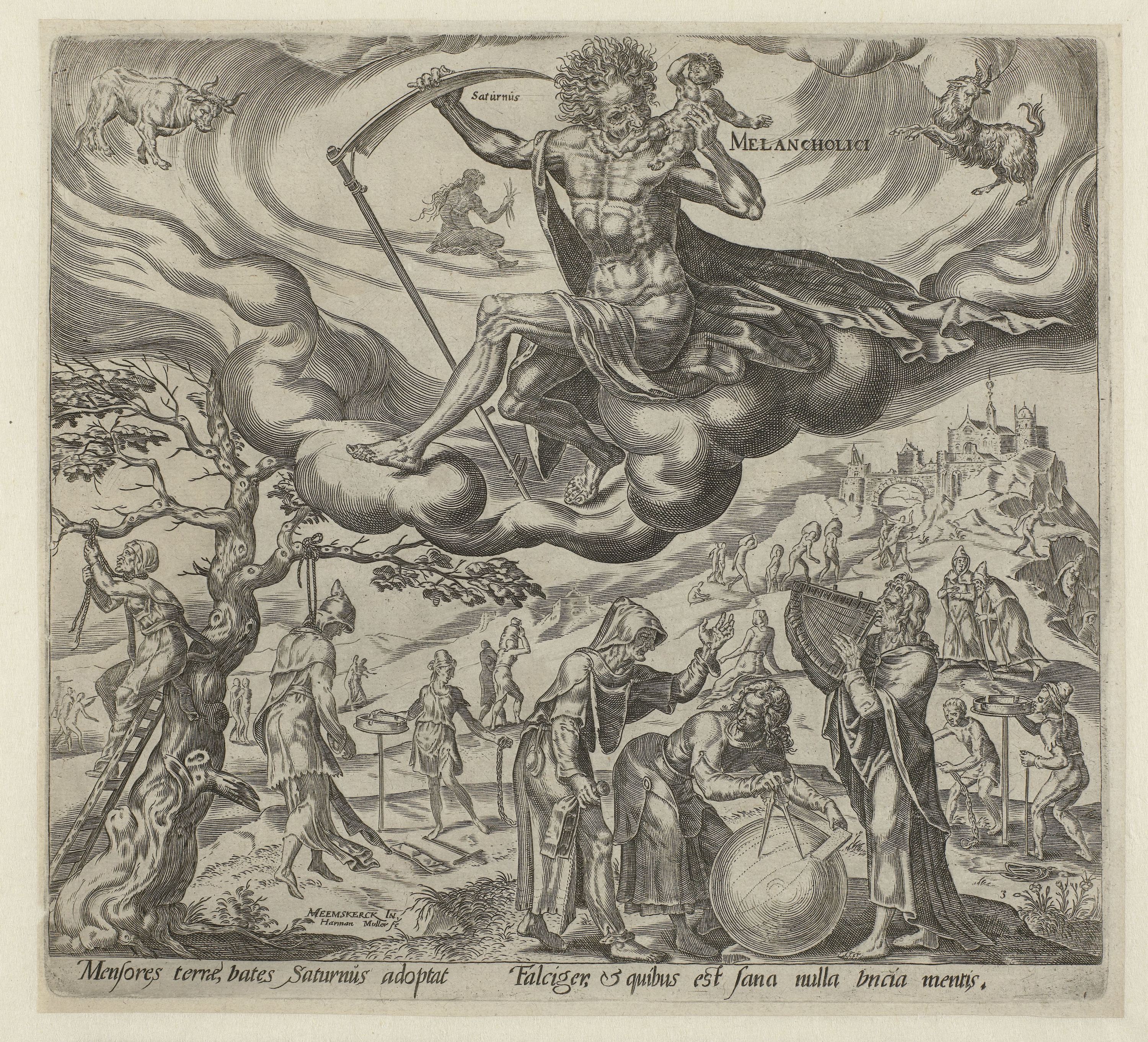 Third print is an image of Saturn, who governs melancholic temperament. That one is a result of excess of black bile, whatever it was (most likely blood from spleen, of slightly darker shade). Melancholic temperament led people to depression, madness and obsession of death. The element of Melancholy is the Earth; “children” of Saturn are farmers, surveyors, but also gravediggers, executioners, as well as convicts and suicide victims. Roman Saturn was a combination of an ancient deity of agriculture and Greek Titan Cronus, who castrated his father and swallowed his own children. Saturn rendered people mad – but that could also mean a creative madness: oversensitivity characteristic for the greatest artists. Antic writers wrote that creativity usually comes with “madness”.

The inscription for this print reads Mensores terrae, vates Saturnus adoptat / Falciger, et quibus est sana nulla uncia mentis (those who measure the Earth, poets and those who have not a bit of sense, take Saturn the scythe-bearer). The signs of zodiac ascribed to the element of the Earth are Taurus, Virgo and Capricorn. 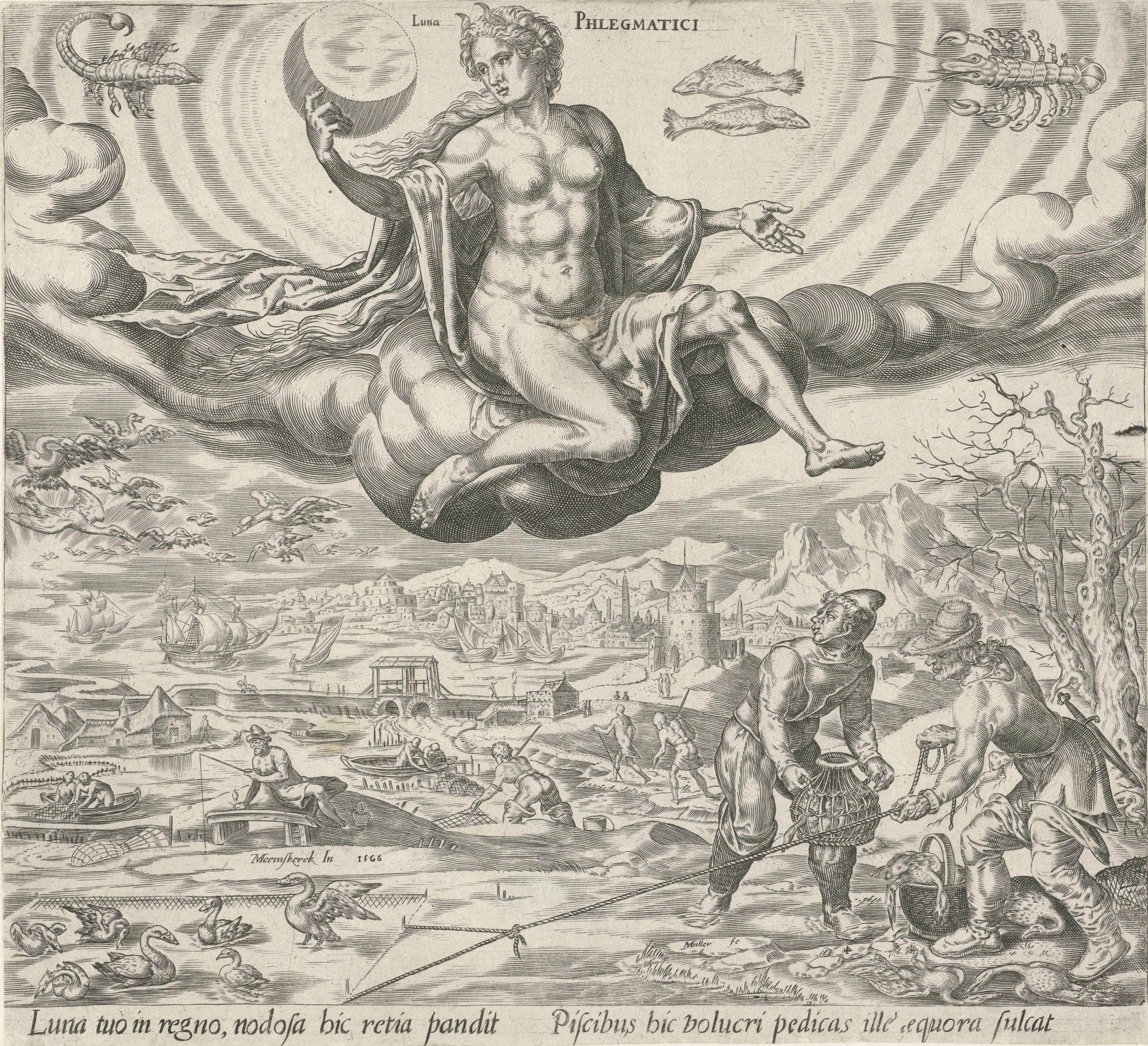 And finally we get the goddess Luna, impersonating the Moon, which was also considered as one of the planets. This is related to the phlegmatic temperament – caused by phlegm. The element of this temperament is water, and so “children” of Luna enjoy fishing and hunting for water birds (Luna tuo in regno, nodosa hic retia pandit, / Piscibus hic volucri pedicas, ille aequora sulcat). Zodiac signs connected with water are Cancer, Pisces and Scorpio. People of phlegmatic temperament were supposed to be good accountants and brokers or agents.

There are no „good” and „bad” elements, nor temperaments; all four are necessary, they complement each other. The Nature needs all four seasons; although we probably dislike the current – winter – the most. In the yearly cycle we now have the time of Saturn; ancient Romans celebrated Saturnalia in December. Sometimes the planet Saturn was depicted with Capricorn and Aquarius: zodiac signs of December and January. Yes, Saturn is a patron of madness and death; it is a god of depression, quite fitting for the times of cold darkness. But we must remember that there is no art without melancholy; Seneca wrote that nothing magnificent was ever created without a hint of madness. Aristotle claimed that all the greatest philosophers, poets and artists were melancholic. 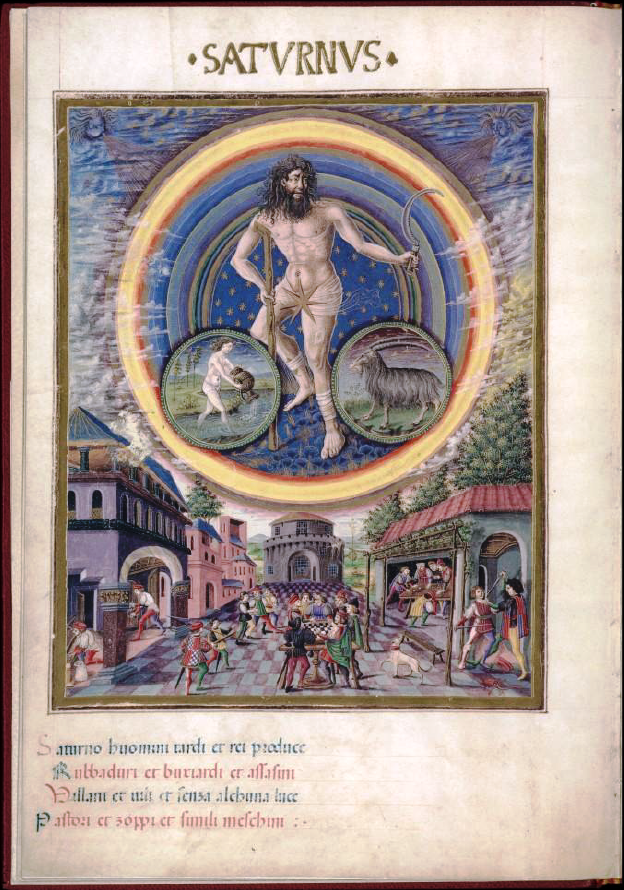 Besides, after a melancholic winter we shall have a sanguine spring: Jupiter and Venus will lead us again to make out in the blossoming gardens.

Let’s look forward to that, even though it is still January. The spring will come one day.