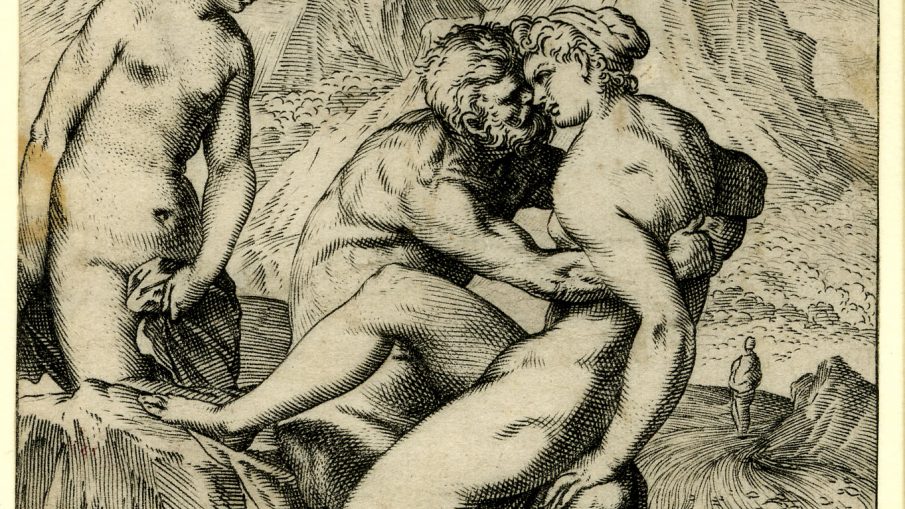 [This post is unsuitable for Readers under 18 years old.]

Agostino Carracci (1557-1602) was a well respected painter and a very popular engraver, as well as co-funder (along his brother and cousin) of Accademia degli Incamminati, also called Accademia dei Carracci. From the 1580s he had been producing not only serious and decent artworks, but also erotic prints, since the 17th century regarded as a series called Lascivie, containing about 15 pieces. It is difficult to say whether it was indeed intended as a series; not all the prints are of the same size, and some of them feature mythological heroes (and lustful creatures such as satyrs), while the others – the Biblical ones.

Not all of the prints are equally explicit; some actually seem to be not less decent than any Early-Modern art-piece of mythological subject. Among those more “modest” there is “Satyr and nymph”: 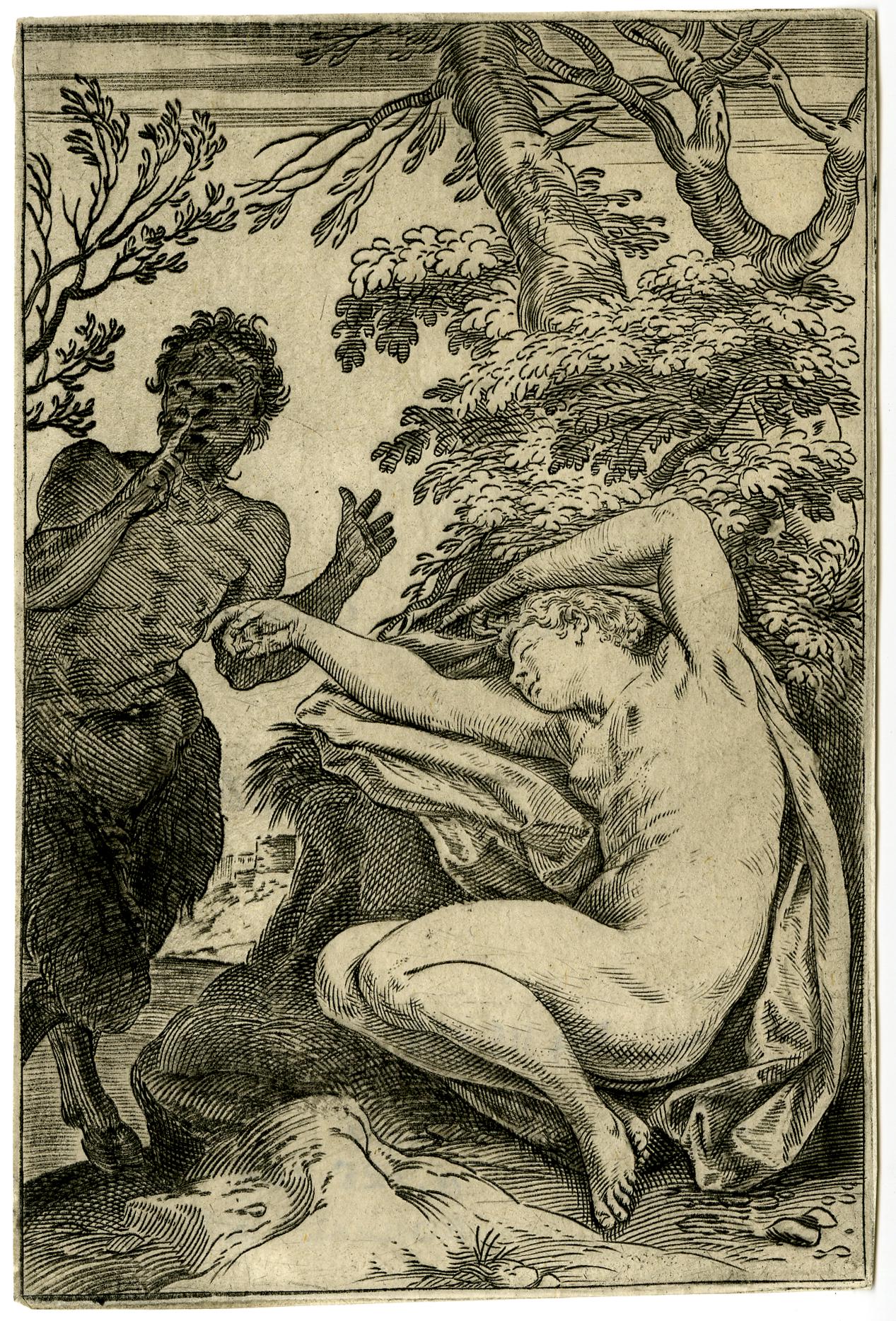 Or „Venus or Galatea”, riding dolphins, surrounded by winged putti: 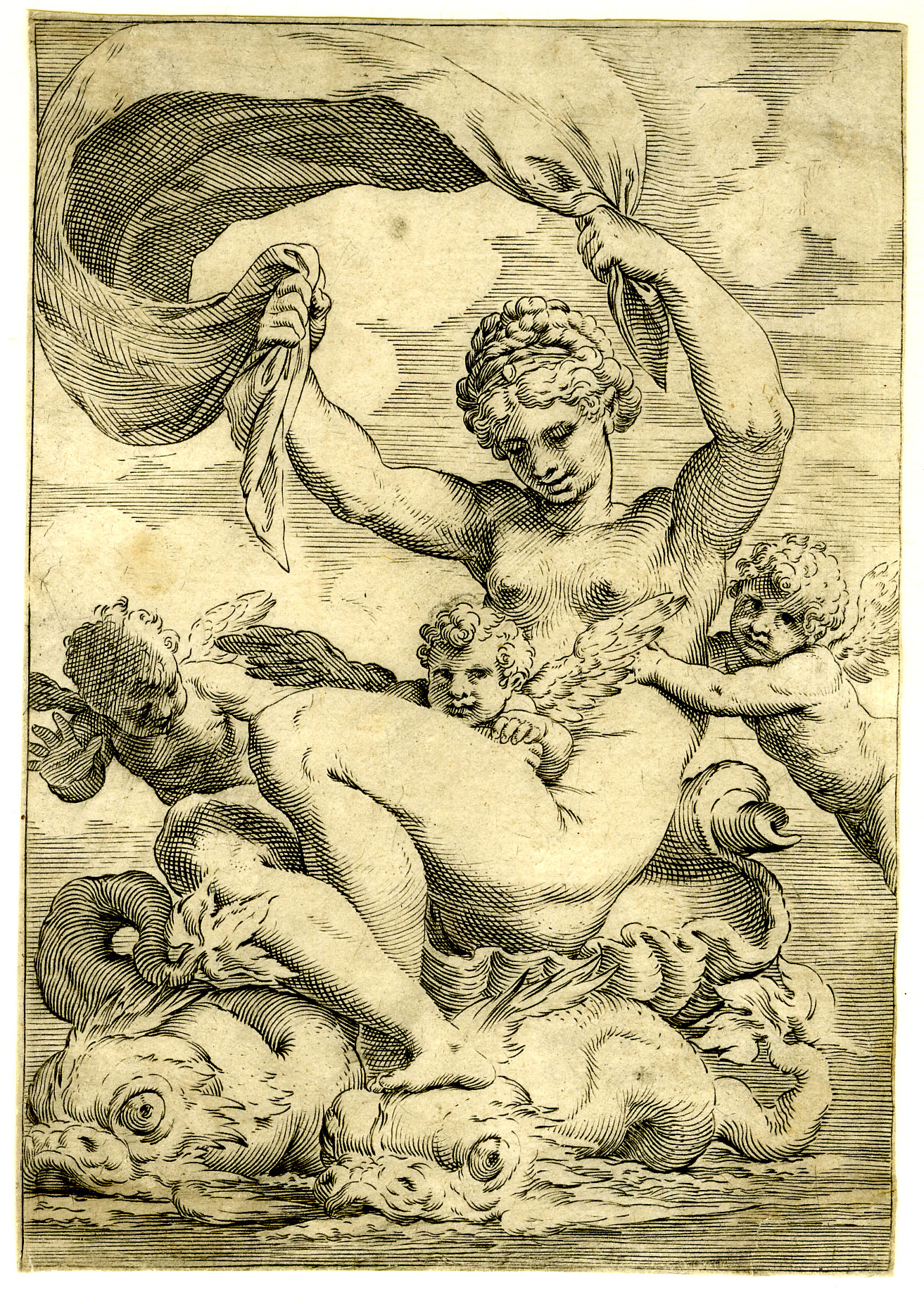 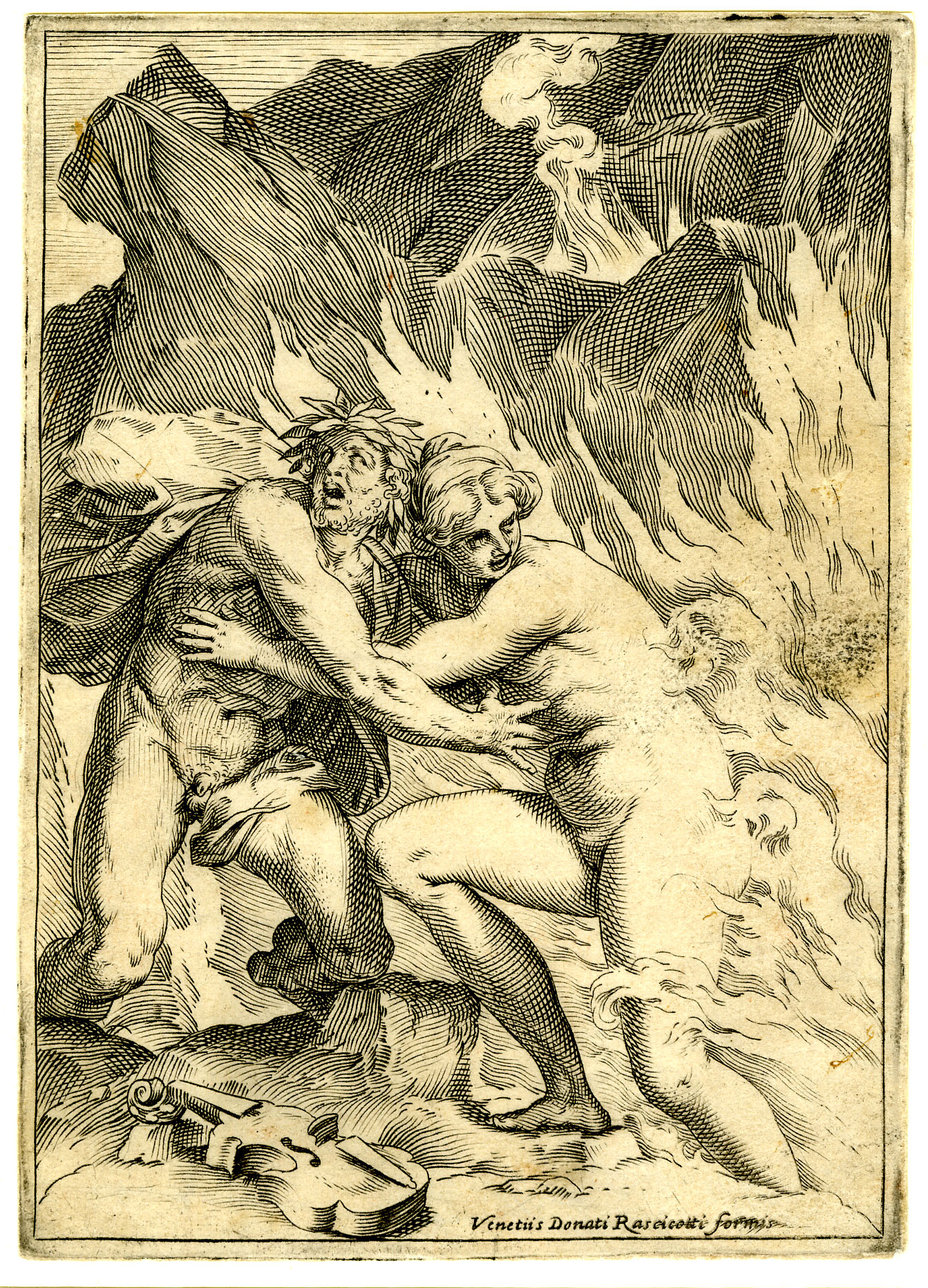 And finally „Andromeda or Hesion” – both those mythological heroines were chained to the rocks and left as a sacrifice for a sea monster, and both were saved (Andromeda by Perseus, and Hesion by Hercules): 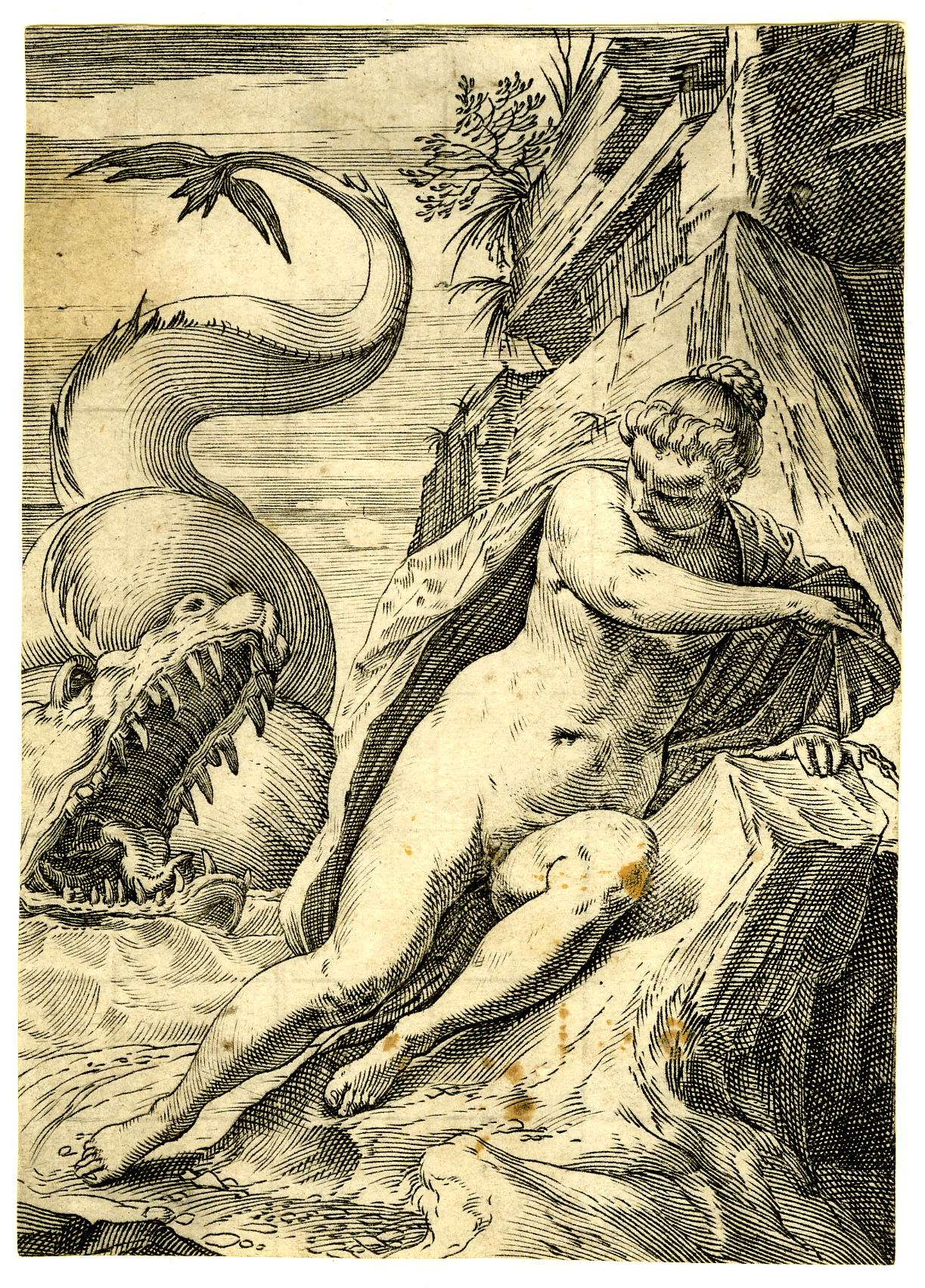 The print mentioned above may depict Hesion after all, as Andromeda appears in another one: 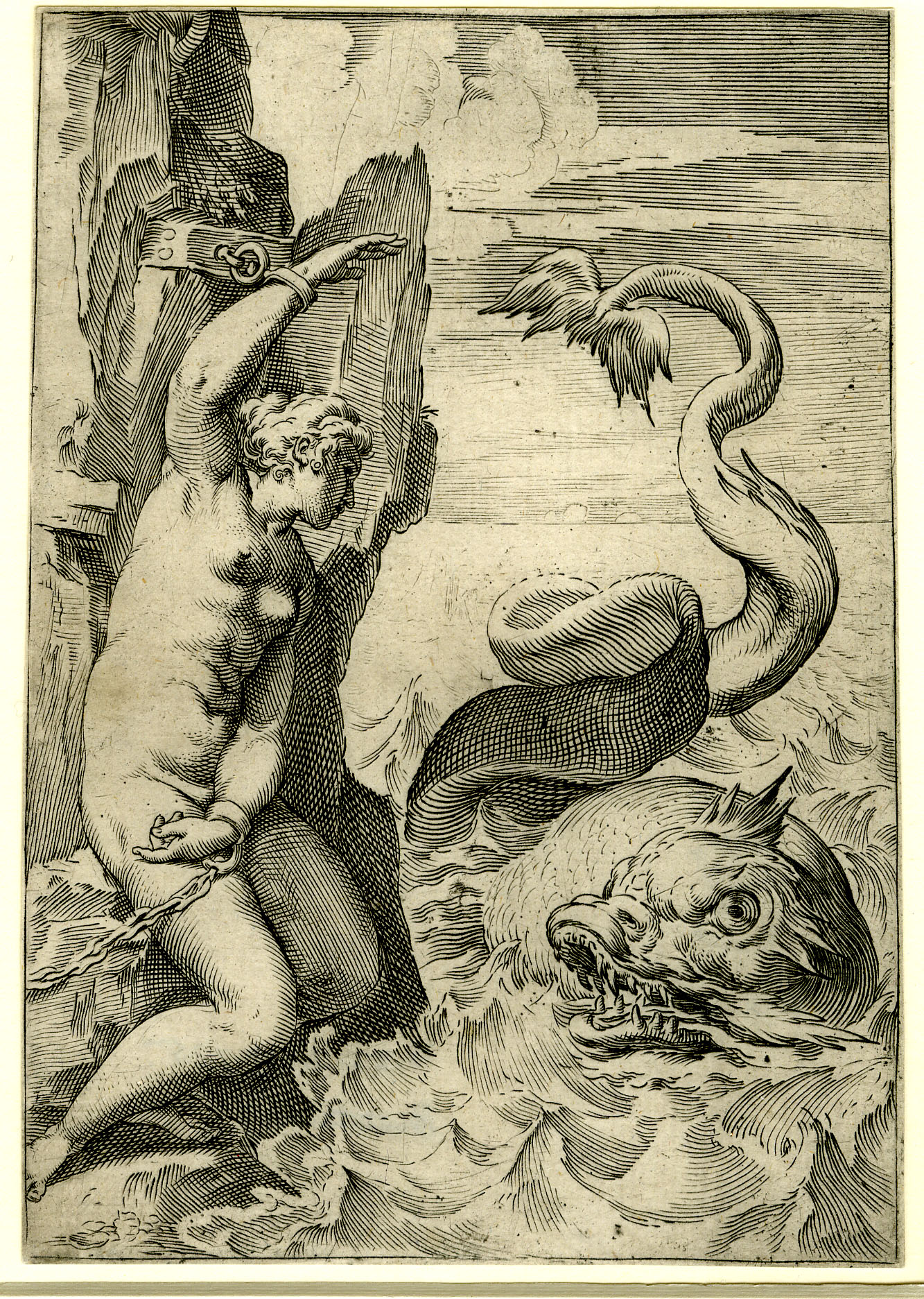 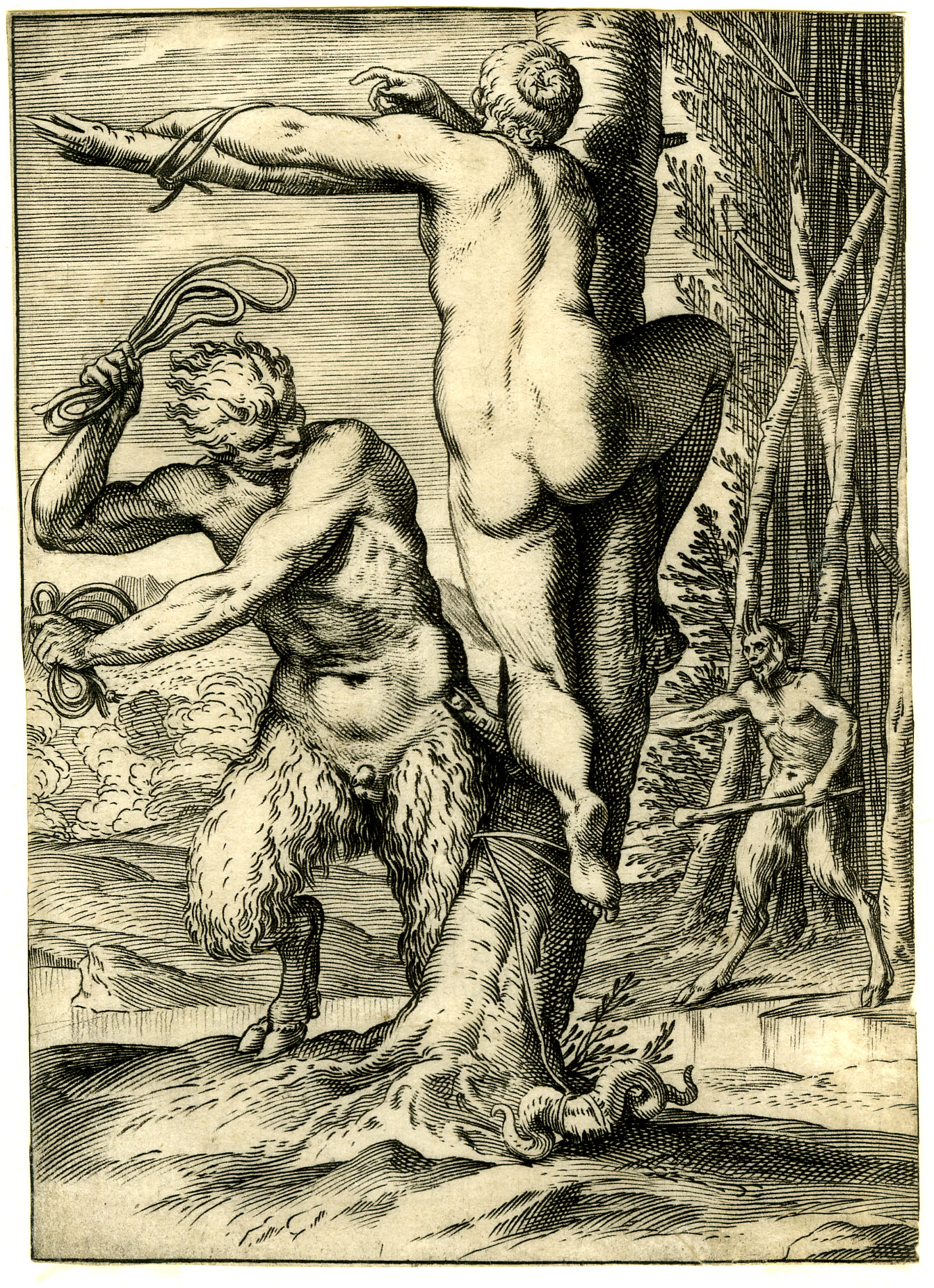 There is also spanking, that is: the punishment of Cupid. Interestingly, it is not a very rare subject; it actually occurred in ancient Roman art. It is interpreted in the context of slavery as an immanent aspect of Roman society; corporal punishment was integral to slavery, and a person in love was often compared to a slave (falling in love being described in literature as loosing one’s freedom). On the other hand, Cupid was often regarded as a mischievous boy, causing sorrows of lovers, or pushing people into sinful affairs. As such, he deserved to be punished – usually by his mother, Venus. The subject of punishment of Cupid is also sometimes interpreted as chastising of carnal desire. But let’s get back to the nymphs and satyrs; there is another depiction of a satyr watching sleeping nymph. But this time he not only looks; he also masturbates. 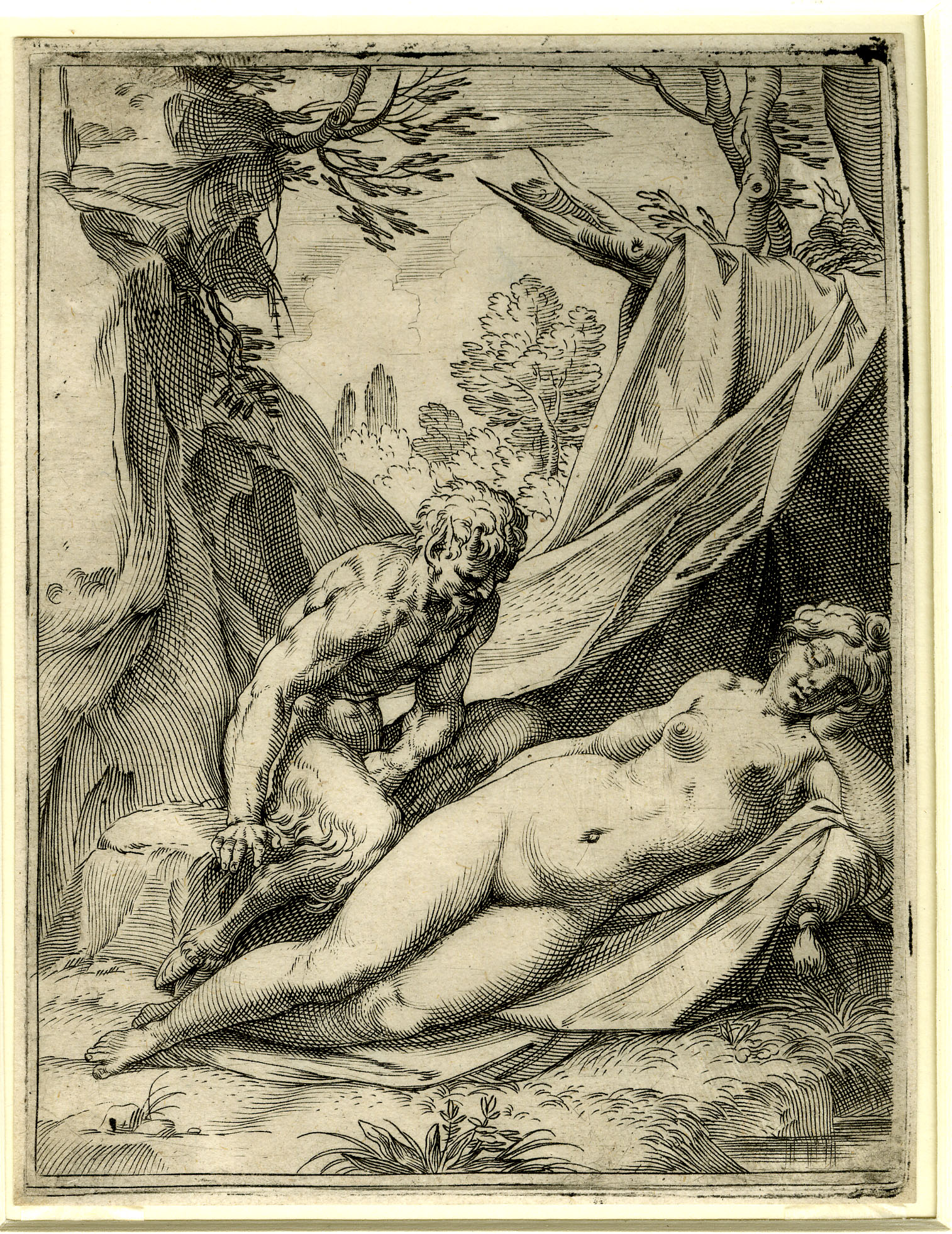 The same activity may be observed in another print, this time of a Biblical subject matter! It is a scene from the Old Testament, Book of Daniel: two lustful elders tried to blackmail innocent Susanna, wife of Joakim, into having sex with them. They assaulted her in her garden while she was taking a bath; she rejected them, even though they threatened to accuse her of adultery, which was punished by death. Susanna was eventually saved by prophet Daniel who proved that the old men were lying. This subject was very popular in the 16th century art, however in most cases the compositions were less… bold. 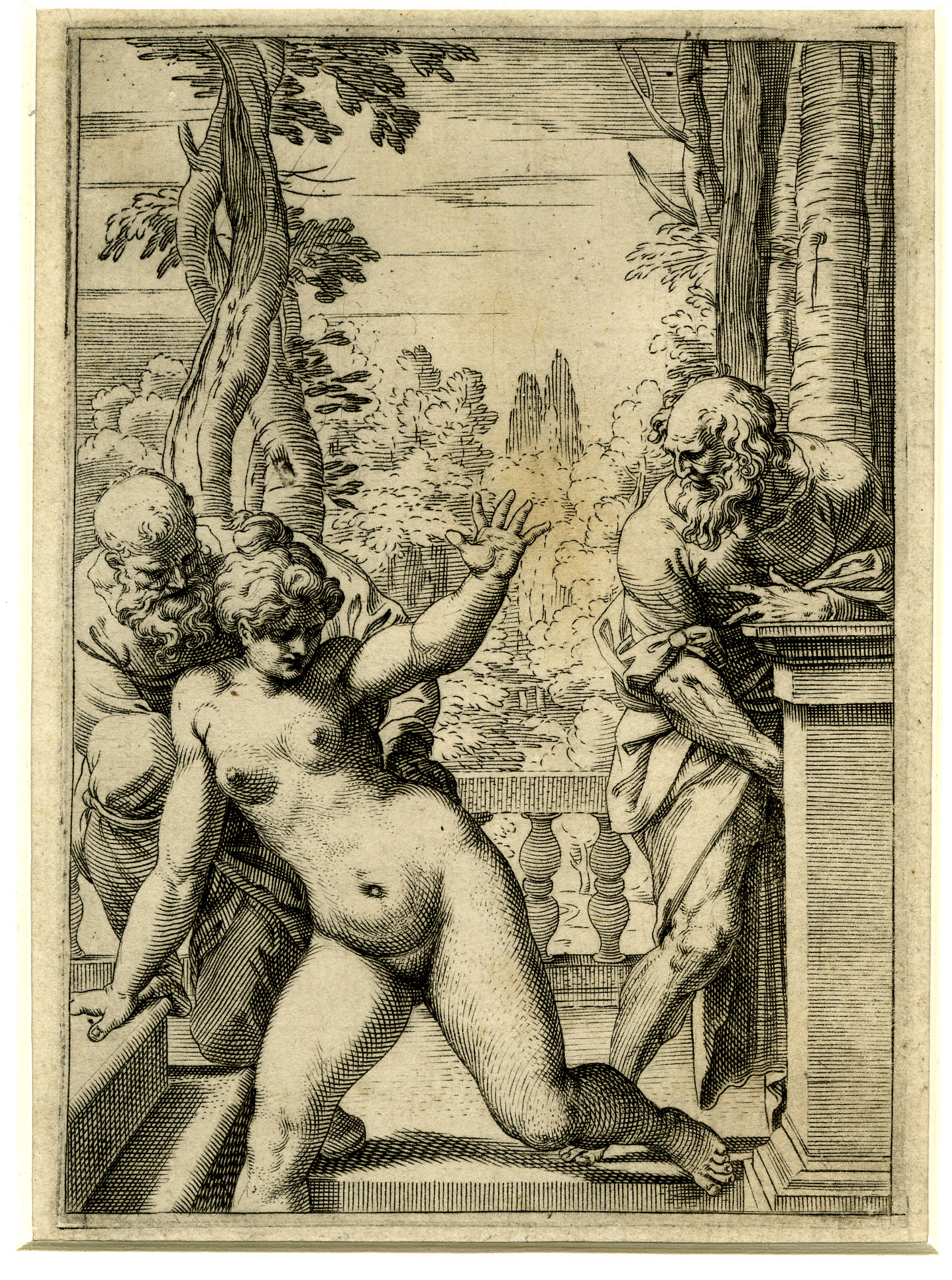 Another Biblical-themed print of the Lascivie series depicts Lot with his daughters. About that incestuous affair I wrote earlier (post available HERE): 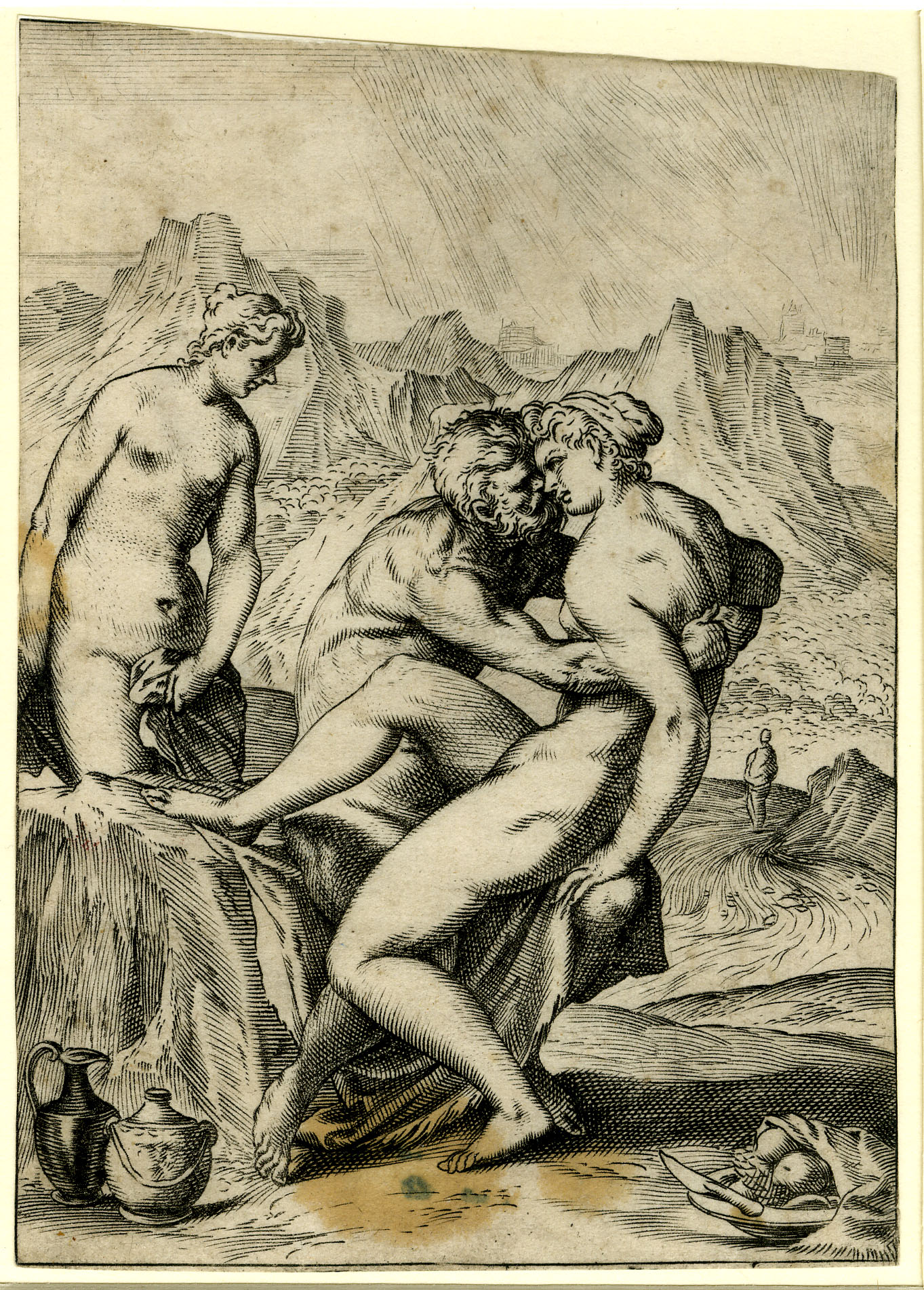 The thing is that usually the Graces embrace each other’s arms, while here we get definitively less decent touching! 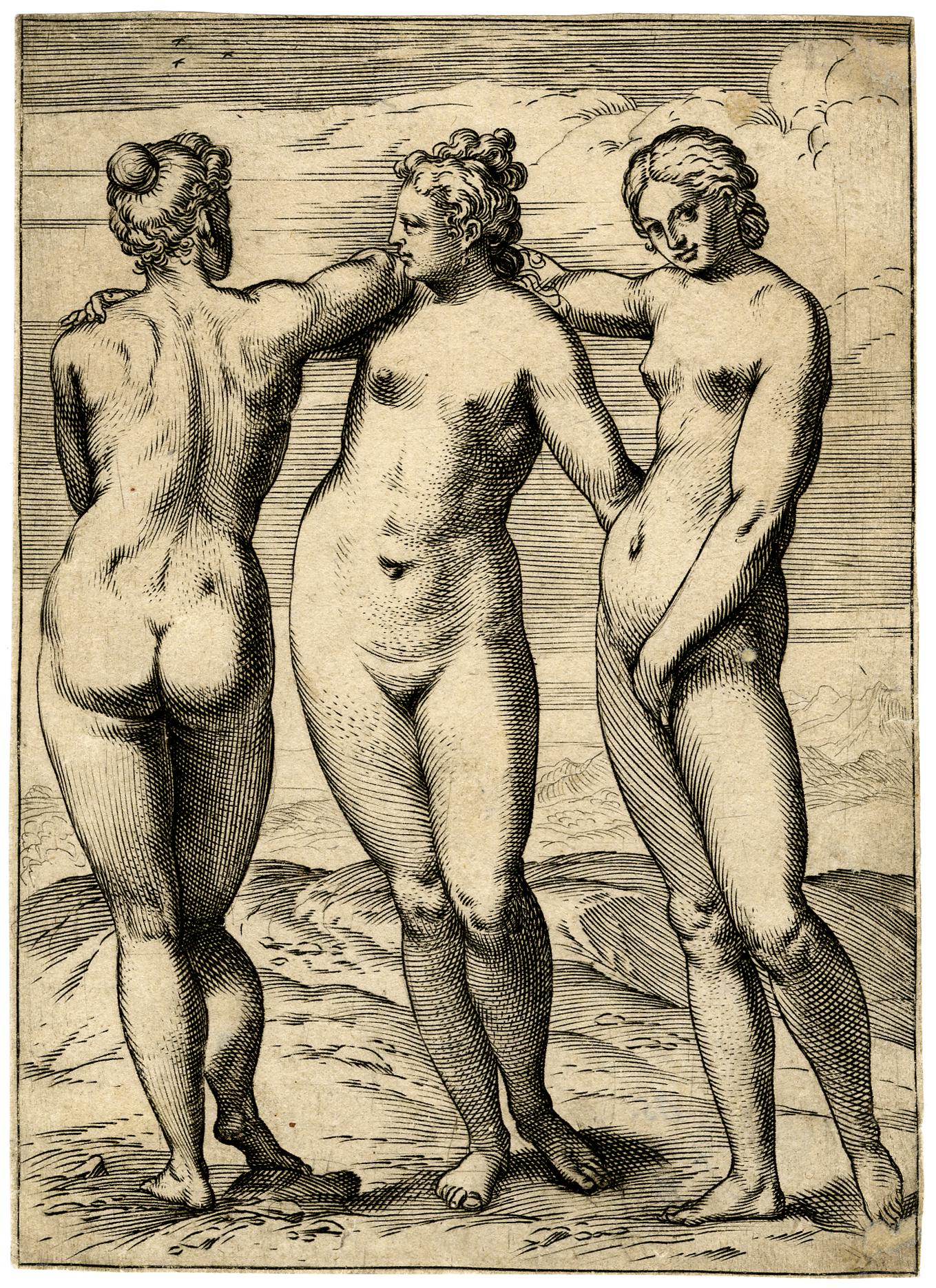 And look, there is another print featuring a satyr and a nymph. It is titled “Satyr embracing nymph”, which seems to be rather… euphemistic. 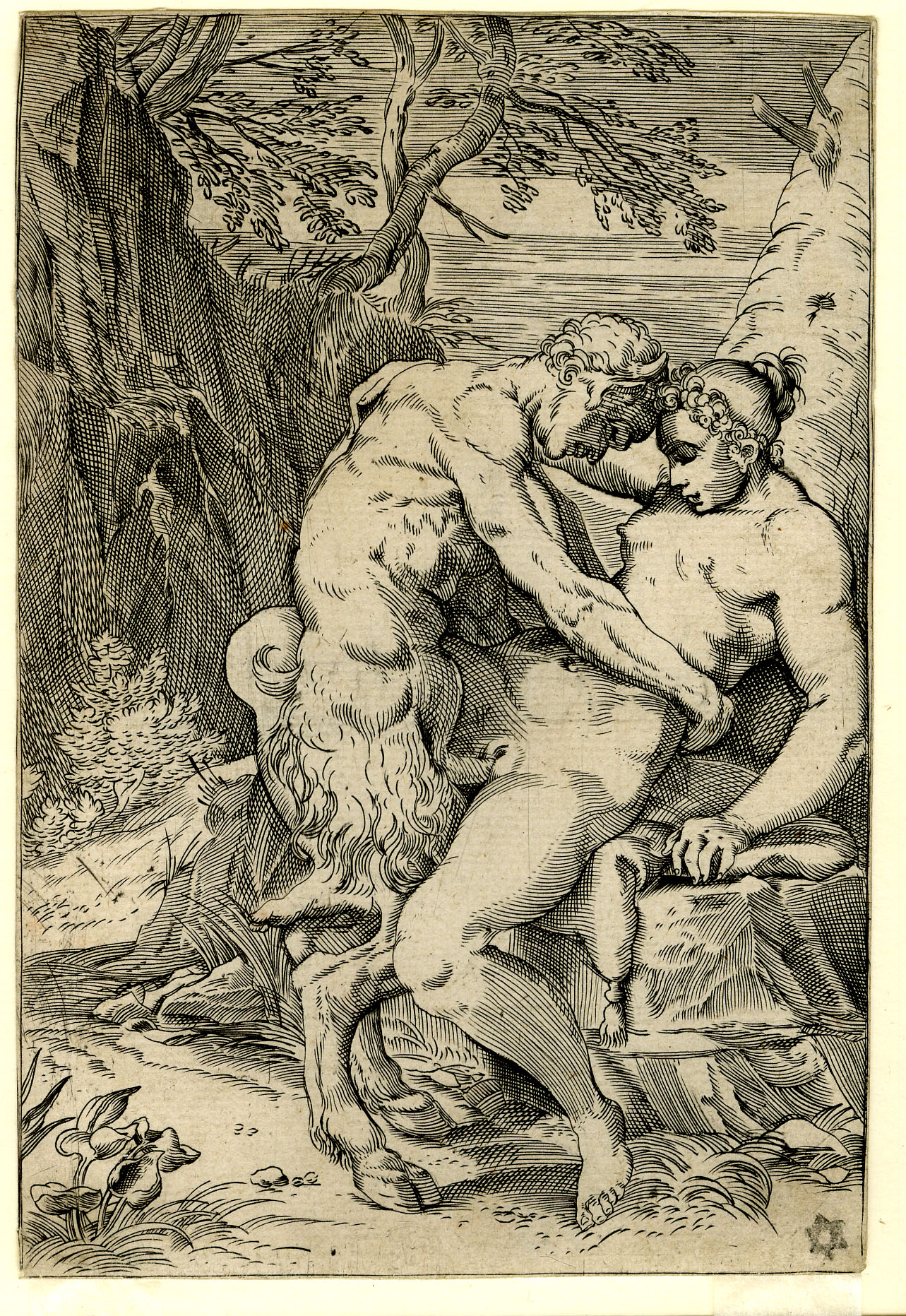 And then we have a bit disturbing image (probably it was supposed to be amusing) of a nymph being fingered by a small satyr (displaying his small satyrical erection), while another child provides her a pedicure. Well, some people have a feet fetish… 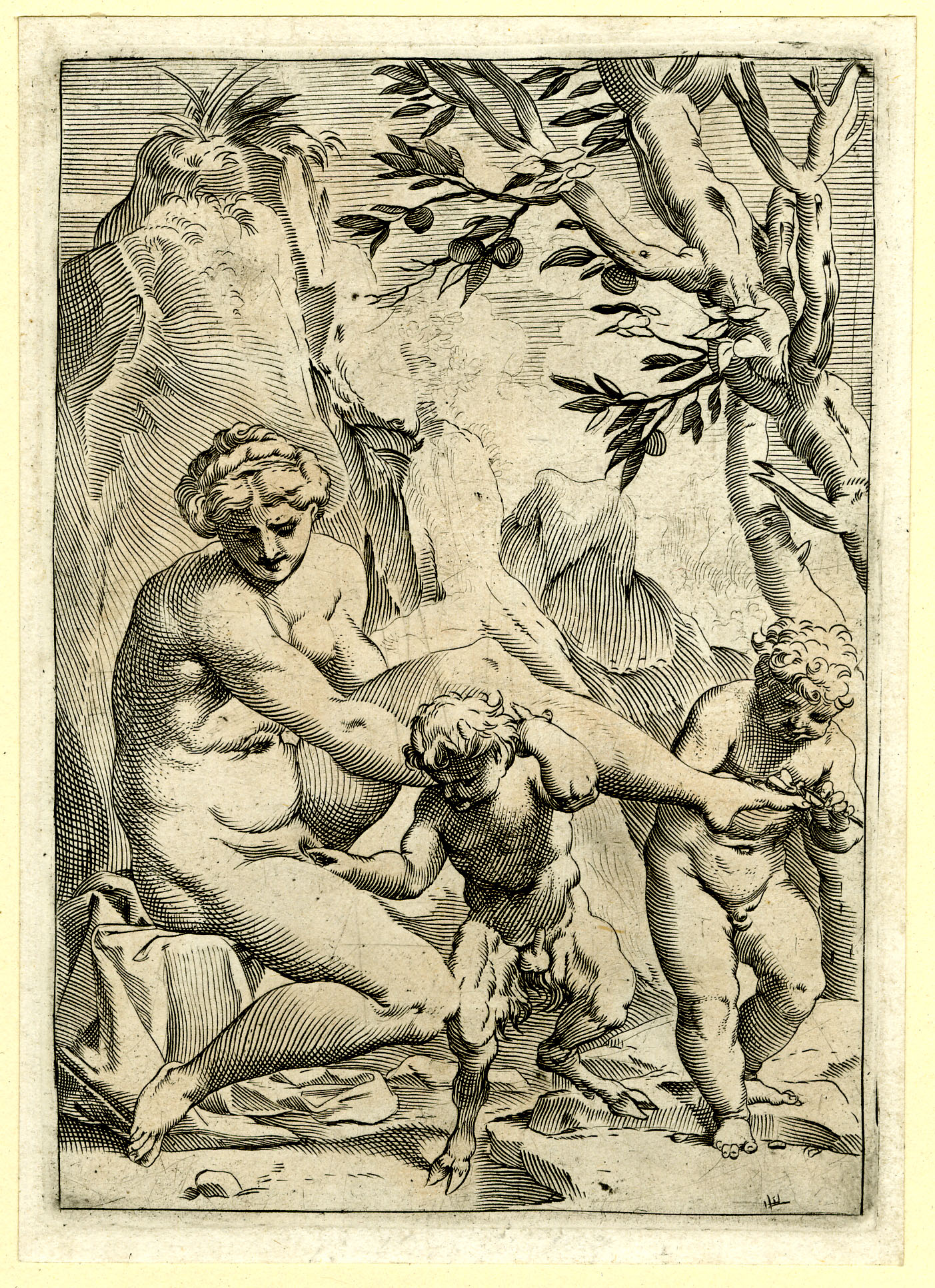 It should also be noted that those kinds of prints were often copied, but also censored. Look at the print of the same composition (in reverse) today in the National Gallery in Prague: 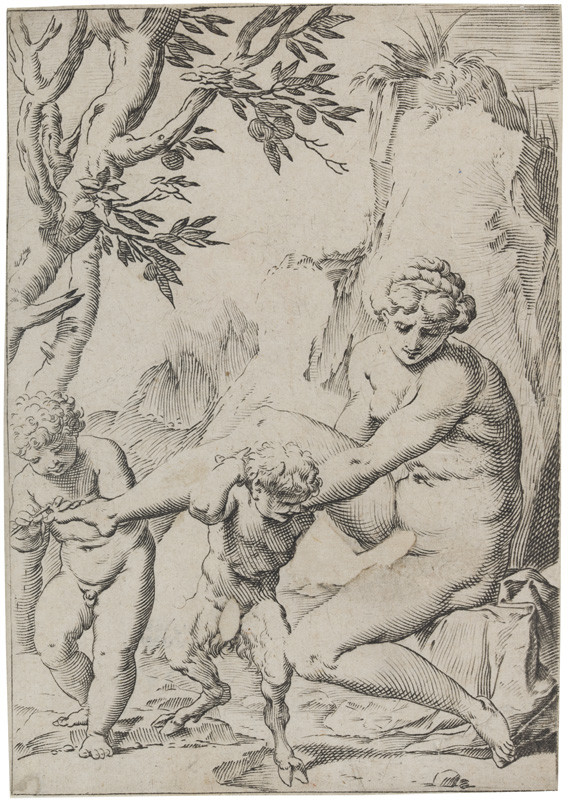 Finally, there are two bigger prints, also now regarded as a part of the Lascivie series; those two are more complex and problematic in interpretation. They provided more sophisticated visual puns, based on double meanings and invited viewers into game of riddle. The analysis of those two prints was published by Patricia Simons („Agostino Carracci’s Wit in Two Lascivious Prints”, Studies in Iconography, Vol. 30 (2009), pp. 198-221).

One of them depicts an old man wooing a young girl; her dynamic pose suggests reluctance, however the man is not exactly aggressive – he only reaches his purse. The girl, on the other hand, quite shamelessly displays her intimate areas, so it is hard to say whether she is indeed determined to put the man off. Beside them, on the bed, we may see Cupid seemingly breaking his bow over his knee. A dog on the floor, licking its erection, undoubtedly is a reference to dirty lust. 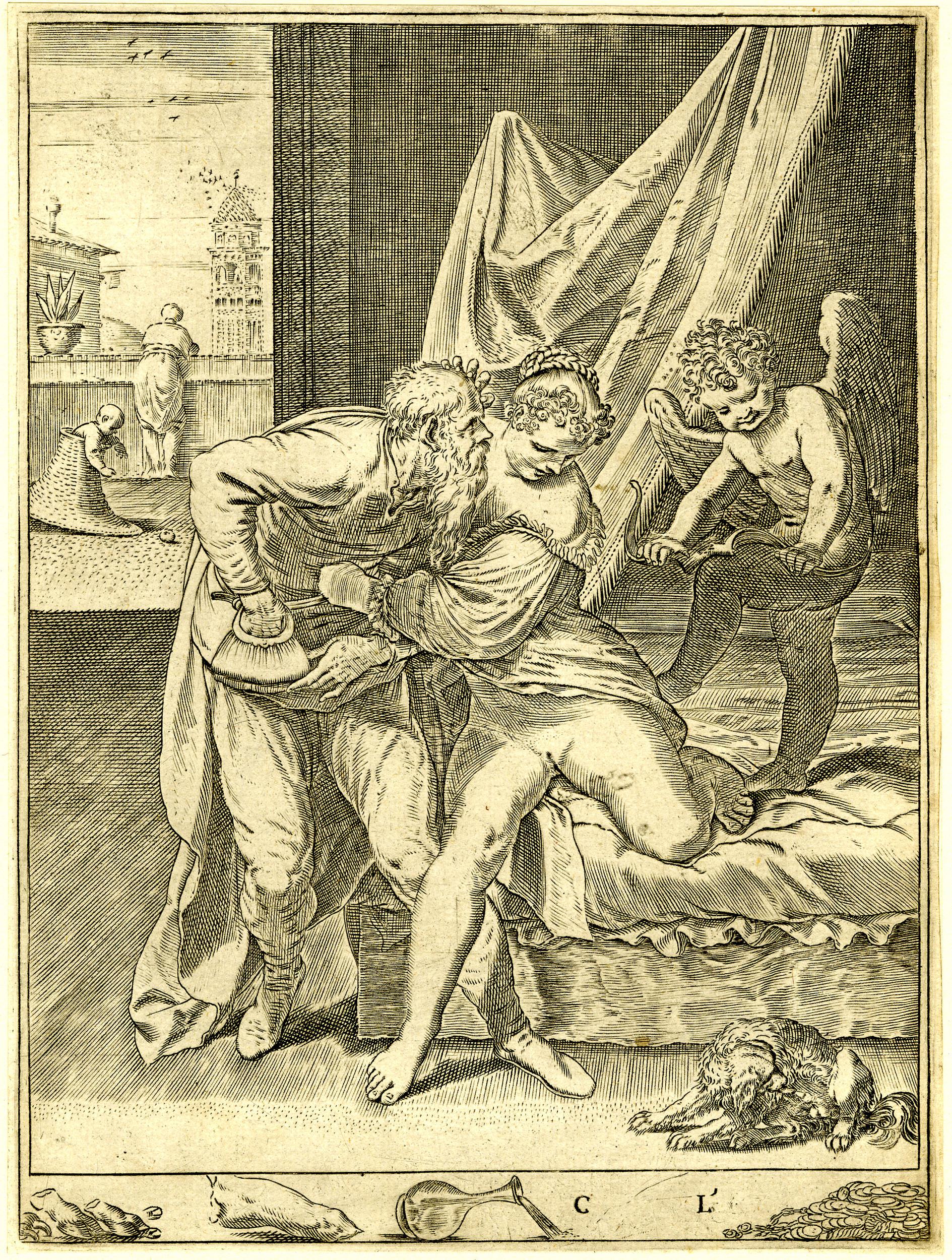 Lower margin of the print contains a riddle: „onghie” (nails, here depicted as a human nail, hooves and claws) „coscia” (thigh) „vin(o)” (wine) + C, L’ + „oro” (gold), which together can be read as „Ogni cosa vinci l’oro” (Gold conquers all). Undoubtedly, it is an allusion to the famous phrase  „Omnia vincit Amor” (Love conquers all), especially in reference to Cupid breaking his bow in a gesture of defeat. In the end it turns out it is not love that conquers everything and opens the gates of physical pleasures; it is money, apparently stronger than any emotions.

The other print is a bit more enigmatic, but evidently erotic in character. A young naked woman lies down in a very “disposable” position; sexual implications are strengthened by such details as a cat (smiling lustily) and a bird in a cage (catching birds symbolised adultery, with a bird as a figure of penis and a cage representing vagina). And on top of that we see a satyr in a small apron (so he is a worker “at work”, and also we can see something is going on beneath that apron), who holds something just above the woman’s womb. What is he holding? 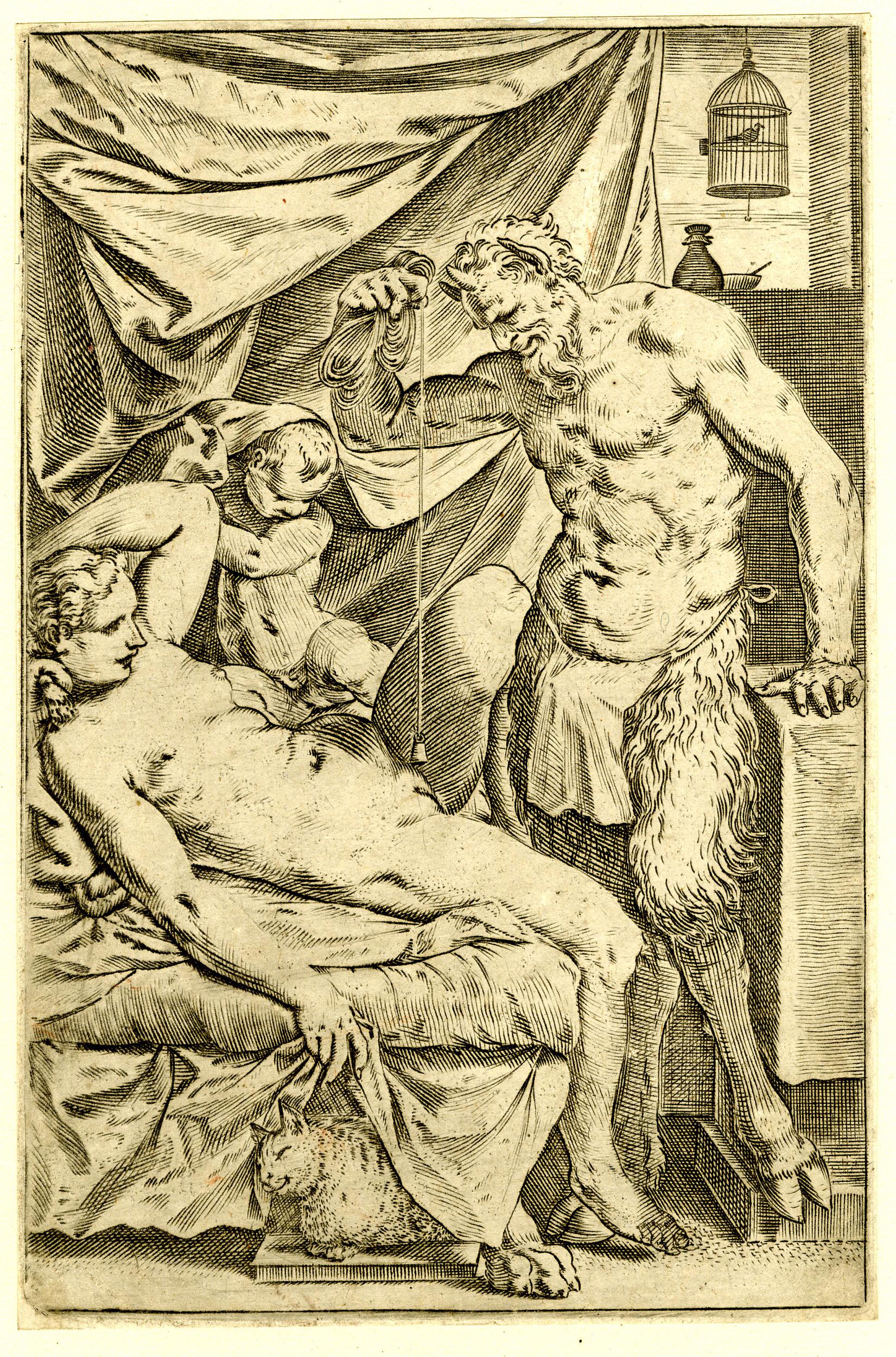 In Italian this instrument is called piombino, as Patricia Simons wrote – that is a ball of weight of led suspended on a cord. It was used by masons for ruling and levelling, as well as for sounding depths. So, we may read the meaning of it in reference to the satyr’s erection (levelled up) as well as to the nymph’s “depths”, likely unmeasurable (which may be a reference to women’s insatiable sexual appetites).

I firmly believe that the amount of curiosities in art is also unmeasurable. I wish I were able to write more often about them – alas, recently I truly had no time to update this blog. I still hope someone is checking for updates here anyway, even if those updates are so rare.

My Dear Readers – thank you for being here with me.