Our Lady of the Sinners 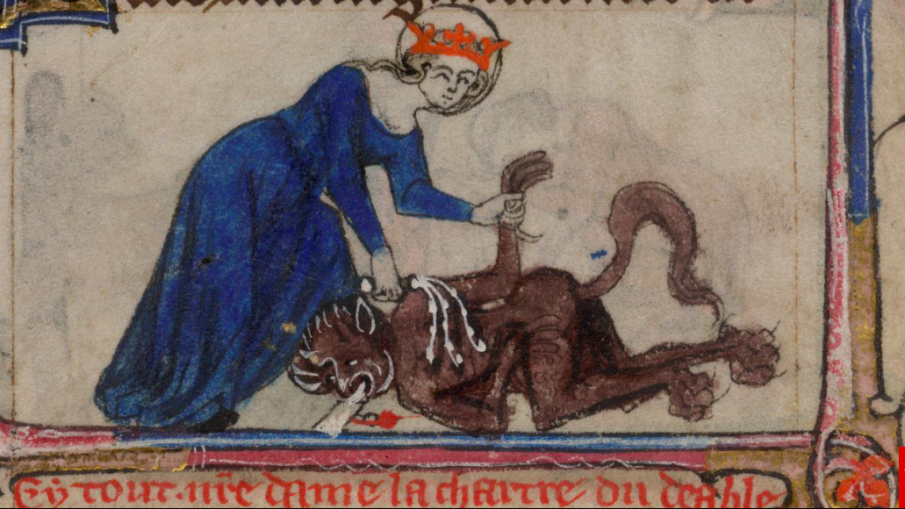 One of my favourite manuscripts is so called Taymouth Hours, dating back to the second quarter of the 14th century (British Library,Yates Thompson MS 13). Its name comes from Taymouth Castle in Scotland, where the manuscript was kept in the Early-Modern times (and also, it contains notes in Scots dialect dating back to the 16th century). It is a luxurious prayer book (Book of Hours), created most likely in London, for someone from the royal family; it was commissioned by a queen, as it contains several depictions of crowned women. There are various hypothesis on who could have been the donor; most recently Kathryn A. Smith in her book“The Taymouth Hours: Stories and the Construction of the Self in Late Medieval England” (2012) argued that the manuscript was commissioned by queen Philippa of Hainault, wife of the king of England Edward III, as a gift for the king’s sister Eleanor of Woodstock on the occasion of her betrothal to Reinald II of Guelders in 1331.

Anyway, this beautiful and lavishly decorated manuscript was undoubtedly intended for a woman. There are many interesting scenes in bas-de-page (lower margins) of each page. There is a strange misxture of Biblical scenes, episodes of chivalric romances and various legends.

I suppose I will get back to this manuscript here on my blog more than once. Today I would like to focus on certain legends about Virgin Mary, depicted in this Book of Hours. The source material for them was most likely a compilation entitled Les Miracles de Nostre-Dame („Miracles of Our Lady”), collected by Gautier de Coincy, benedictine monk living at the turn of the 12th and 13th centuries. Most of those stories were later retold in the collection of 420 songs, entitled Cantigas de Santa Maria, written in the medieval Galician-Portuguese language during the reign of Alfonso X of Castile El Sabio (1221–1284), and often attributed to him. They also appeared in other compilations, known around the Europe. Most of them are the stories about how Virgin Mary miraculously rescued sinners that got themselves into troubles. Often she simply did that by beating the devil. 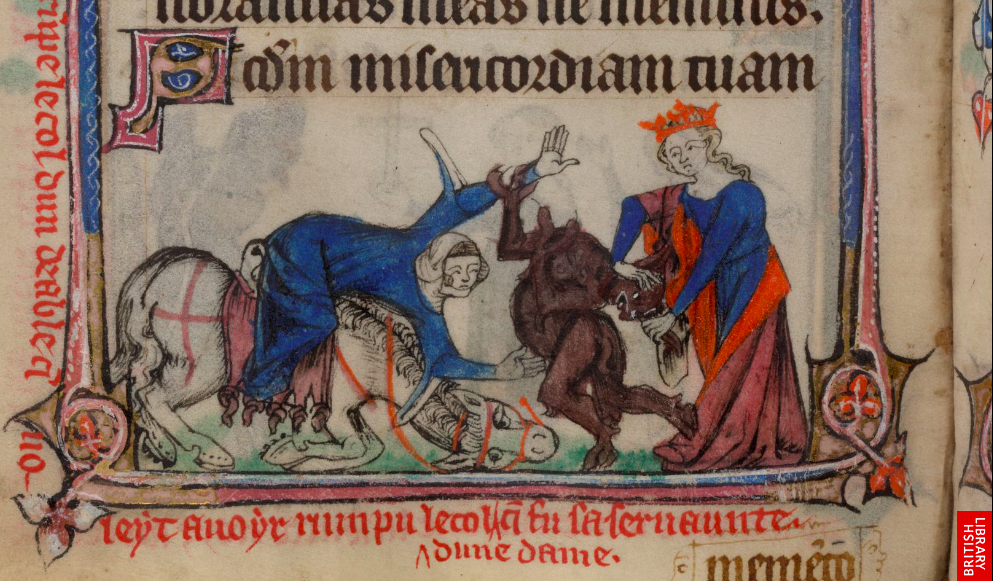 Among those legends there is a story about the cursed child (conceived in sin and dedicated to the devil), rescued by Virgin Mary – I have already written about it in my post entitled “Our Lady of the Baton” (available HERE).

Meanwhile, among the stories illustrated in the Taymouth Hours we would find another fascinating “motherly” story: it is about an abbess who got pregnant (“The Abbess Delivered”). The titular abbess was a very pious woman, especially venerating Virgin Mary; alas, one day the abbess fell pregnant with the steward. The nuns of the convent informed the bishop about it, but Virgin Mary saved the abbess: she had the baby delivered and hid it at a certain hermit’s place. When the bishop decided to examine the abbess, it turned out that the Mother of God miraculously restored her virginity. In the series of images in the Taymouth Hours we may see the Virgin taking the newborn child away (with the aid of an angel), then an angel delivering the baby to a hermit, and a bishop checking out if there was any milk in abbess’ breasts. Meanwhile, the child was nursed by Virgin Mary herself. 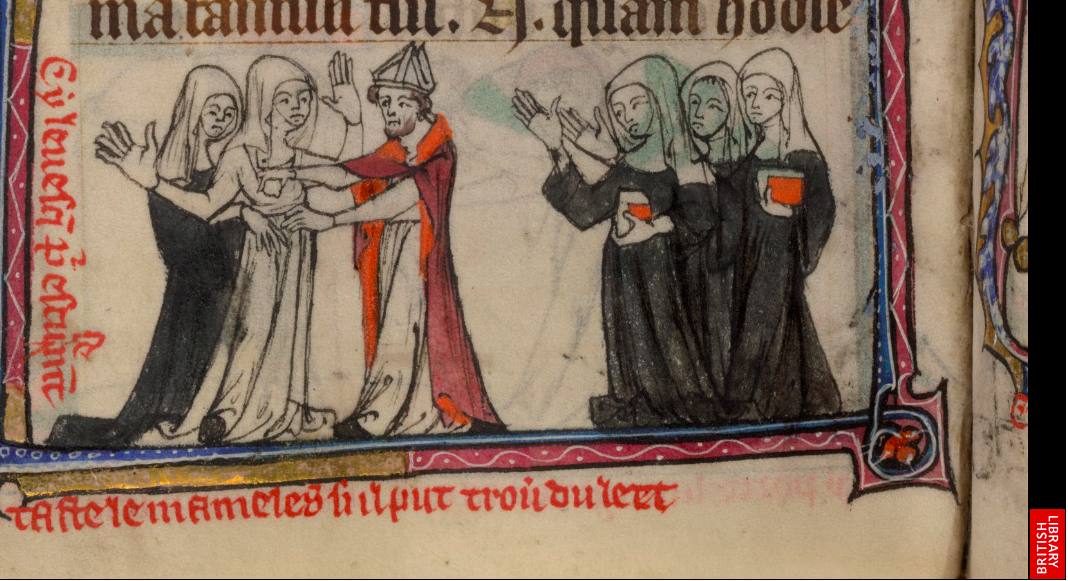 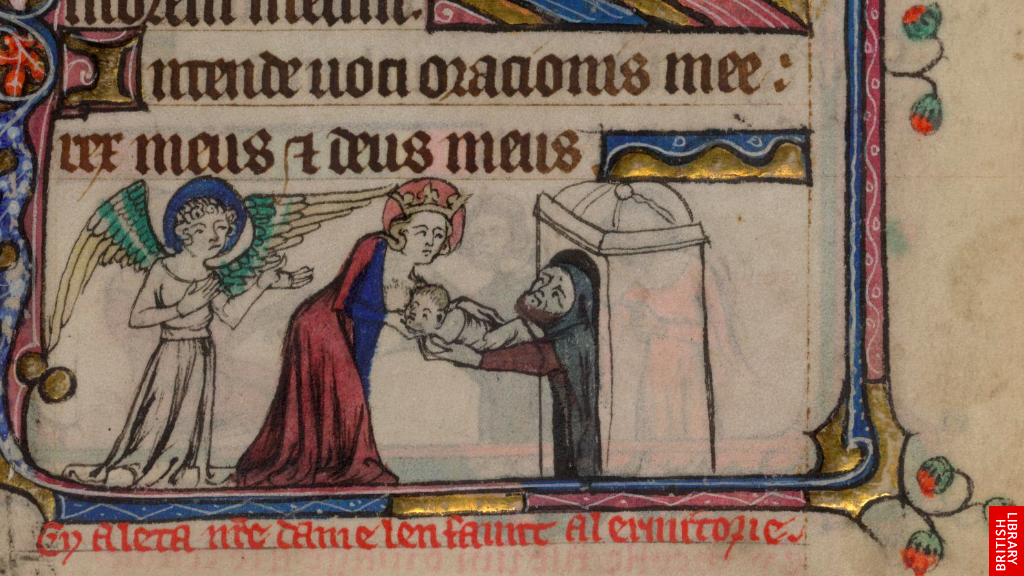 All together we may notice that in those medieval legends the Mother of God is often morally ambiguous, saving sinners from punishment they otherwise deserved. It goes along with the cultural trope of a merciful mother, juxtaposed with a just father (and so, the sinners are children, seeking their Mother’s help to avoid the punishment from God the Father, even though they actually deserve the said punishment). Especially often those stories featured Madonna saving women or clergy. Another interesting example would be a story of a monk, who had an affair with a married lady. They were found out and imprisoned in stocks, but Mary came to the rescue, bringing a pair of devils with her. She freed the couple and put the devils in the stocks – the monk immediately returned to his monastery, wile the lady went home. Finally, the abbot who came to see captured monk, found the devils in stocks instead, so he decided that the whole accusation was false.

And so, it seems that Virgin Mary in medieval legends was helping out adulterers (!) and oath-breakers, especially those who broke the vows of chastity or marital vows. It is especially interesting when we consider the fact that this particular Book of Hours was most likely a gift from one woman (already married) to the other (who was just about to get married). 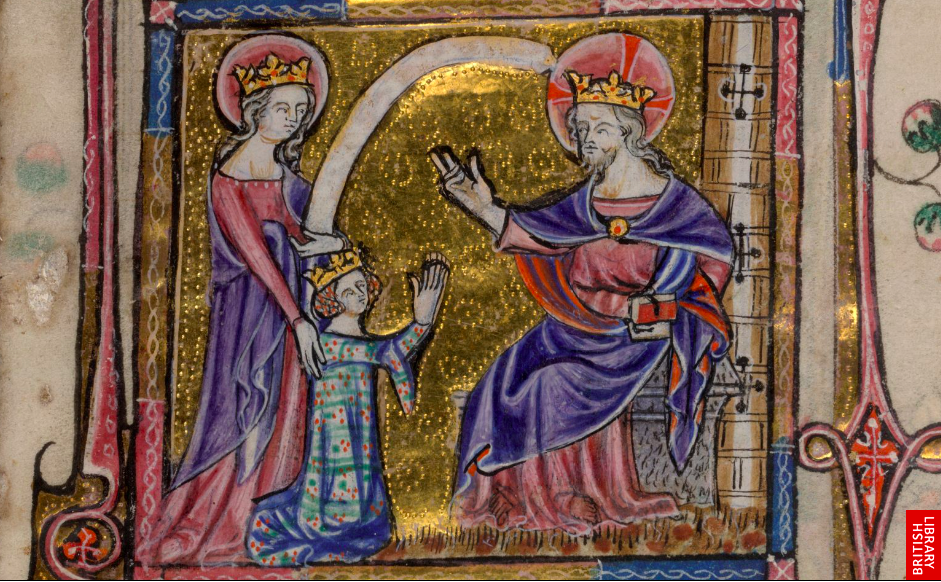 Here we may notice, though, that some medieval medical treaties (e.g. the 12th-century „De curis mulierum”, attributed to a physician from Salerno, named Trota) actually contained recipes for “restoring” virginity, and those did not recommend praying: the best would be applying leeches on labia before the wedding night, to acquire swelling and bleeding expected of the act of defloration. It looks like even in the Middle Ages women trusted medical knowledge more they they trusted Virgin Mary – at least when it came to deceiving their husbands.

But to whom those poor husbands may have prayed? Well, I suppose it could have been St Joseph.