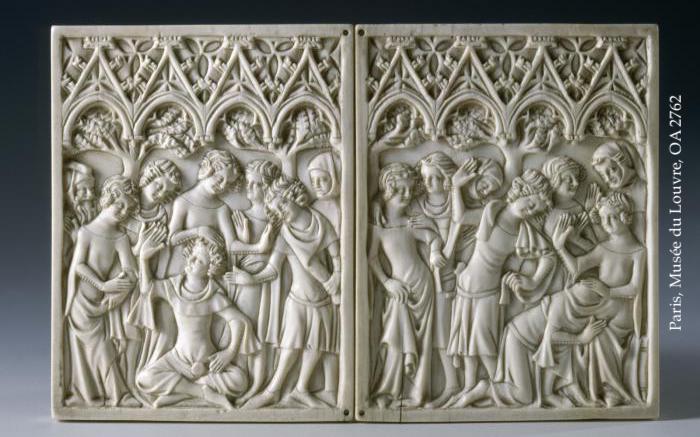 Lately I have came across a PhD thesis submitted by Christopher Thomas John Wilson to the University of Exeter in 2012, entitled „The dissemination of visions of the otherworld in England and northern France c.1150-c.1321”. But this post is not going to be about medieval ideas about afterlife; instead, I would like to focus on certain details from one of the examined visions. Those details are not very relevant for the main storyline of this legend, but I found them… slightly disturbing.

In 1196 in the benedictine abbey of Eynsham in Oxfordshire a monk named Edmund had a vision of what me be considered an early description of a Purgatory (the development of this concept is a separate issue, for details see the dissertation linked above), after he recovered from a long illness. The vision has been written down by his brother Adam, who was a monk in the same abbey. Latin text Visio Edmundi Monachi de Eynsham was in the 15th century translated into German and English; the latter version is entitled The Revelation of the Monk of Eynsham (after 1470, printed in 1483; contents available ON-LINE).

The disturbing moments I mentioned happened before Edmund explored the otherworld – at first he experienced some weird incidents in his own abbey. On a Good Friday he went to St Lawrence Chapel to worship the cross, but suddenly the image of Christ began to bleed. What did Edmund do then? Well, he collected some of that blood („I caught in my cupped hands I don’t know how many drops of that precious blood”), rubbed it into his face (“and bathed my eyes, my ears and my nostrils with it.”), and even licked a bit (“And then I put a drop of that blessed blood into my mouth and with great desire in my heart, I swallowed.”). He wasn’t even sure if what he did was right (“And whether or not I offended God by doing this, I don’t know.”). That vision was preceded by a relation about a corporal punishment that Edmund claimed to have received from the prior and his own brother Adam (Edmund believed he had been punished for skipping Lent services due to his illness). After his vision of bleeding Christ, Edmund found himself in the chapter house, accompanied by the prior dressed in white. The prior gave him absolution and six strokes of the birch, which turned out to feel so good, that Edmund asked for more, but his request has not been granted. („I asked him repeatedly to increase my penance, for at every stroke instead of pain and sorrow I felt an inestimable and incredible sweetness and joy.”).

After Adam listened to this story, he reassured his brother that none of that in fact occurred: neither him nor the prior ever punished Edmund. So, Edmund deduced, it must had been an angel who beat him (and perhaps because of that it was such a pleasure). 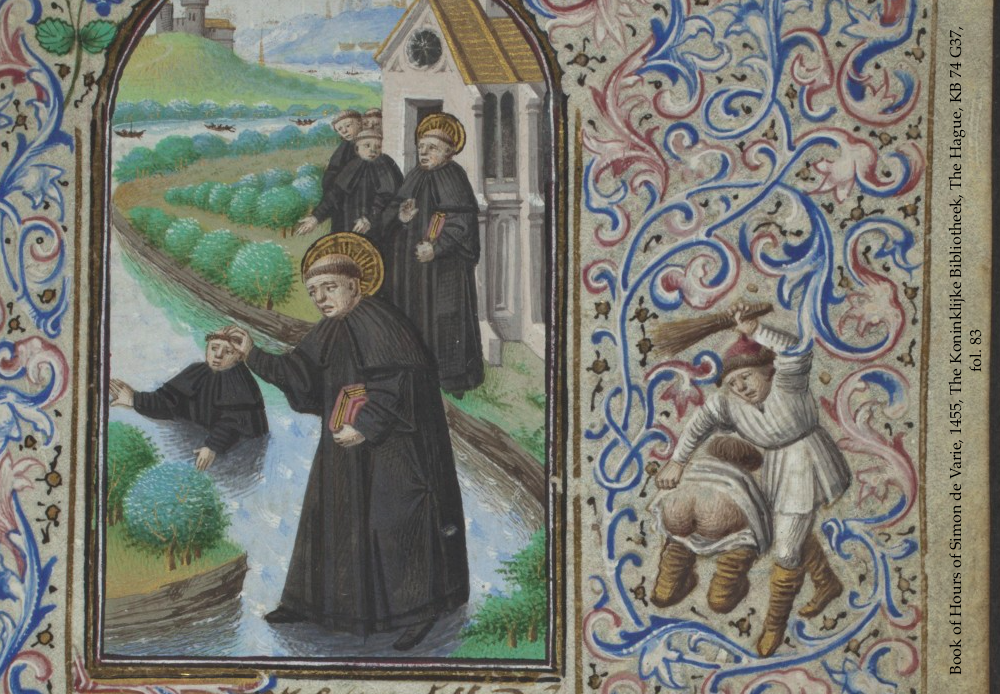 The game was played in the group of ladies and gentlemen: one person had to assume the position suitable for receiving smacks. He or she should not look around, but was supposed to guess who hit. If the guess was correct, they switched places; moreover, in case of suitable gender configuration (man/woman) involved parties may have kissed. 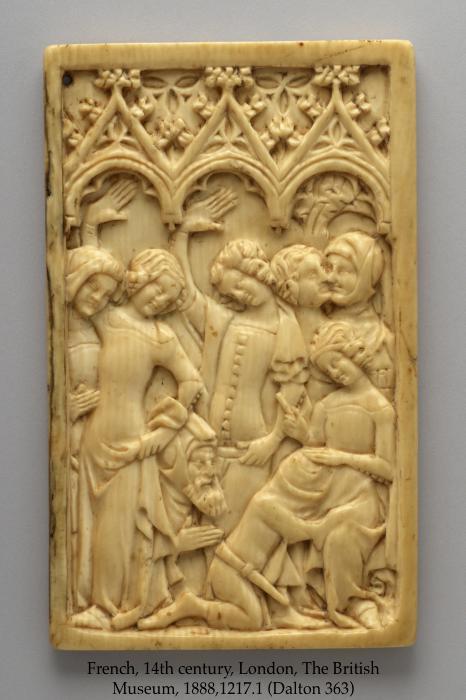 To ensure that spanked person did not peek, his or her face was hid in someone else’s lap… in most depictions we may see a man bent over, whose head is secured: not only in a lady’s lap, but often… under her skirt! Well, it was certain that he would not peek. The question is, whether he would be willing to switch places with anyone at all.

In the digital database Gothic Ivories (ran by the Courtauld Institute in London) a search of “jeu de haute coquille” gives eight ivory objects. Most of them are tablets dating back to the 14th century, but there are also ivory caskets, and a 15th century comb. 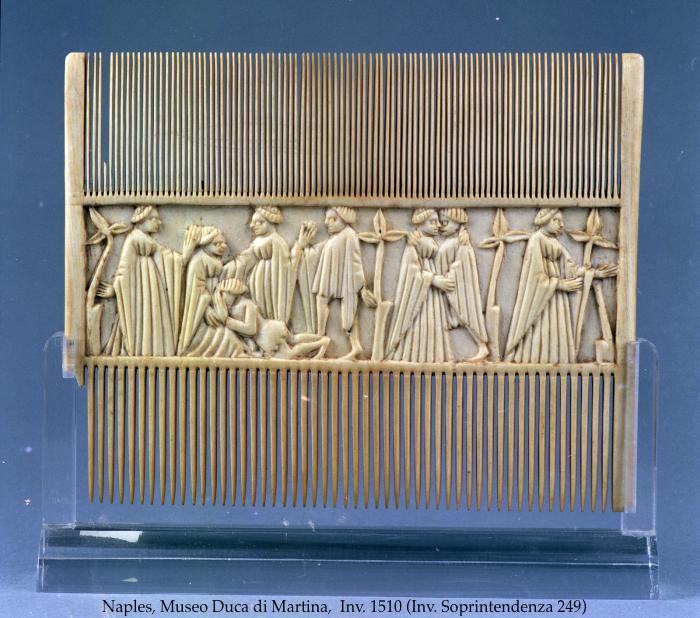 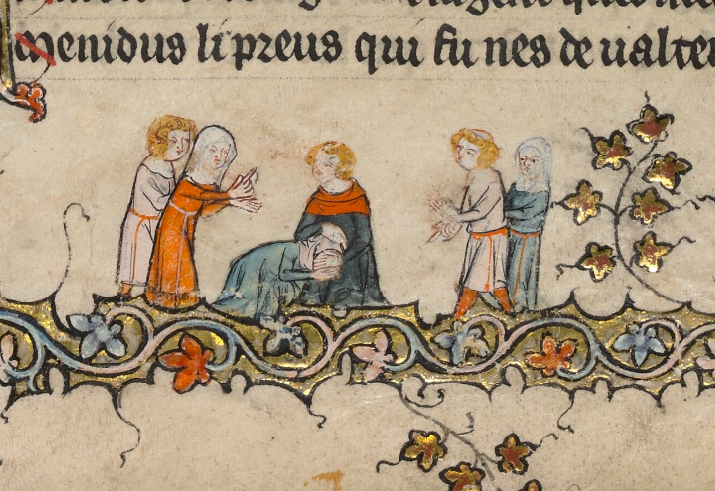 Or in the tapestries (e.g. in the Middle-Rhine one, ca. 1400, in the Germanisches Nationalmuseum in Nuremberg, Gew668). 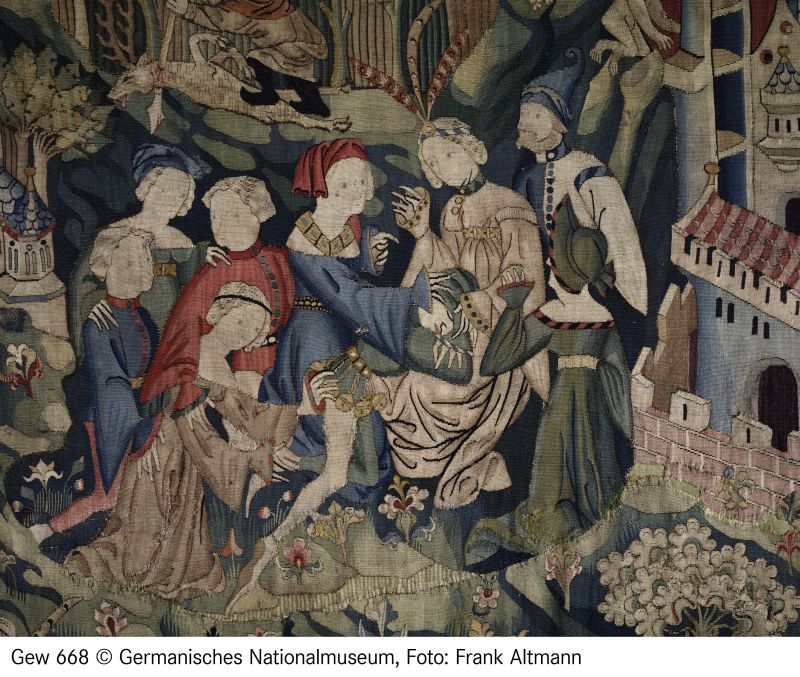 As a result we may just assume that illustrations of this spanking game simply decorated everyday objects. Like this ivory casket (second scene from the left): 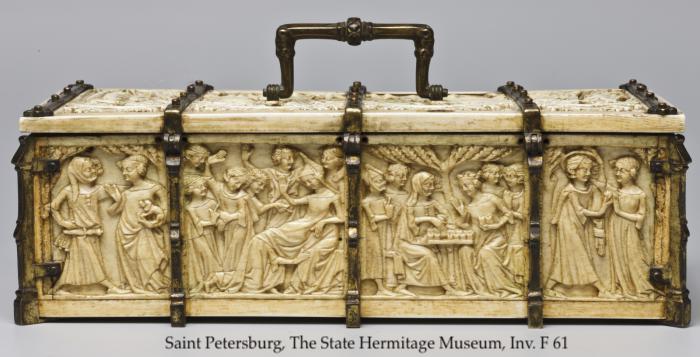