Home » Blog » Men that could not be seduced
Sun07

Men that could not be seduced 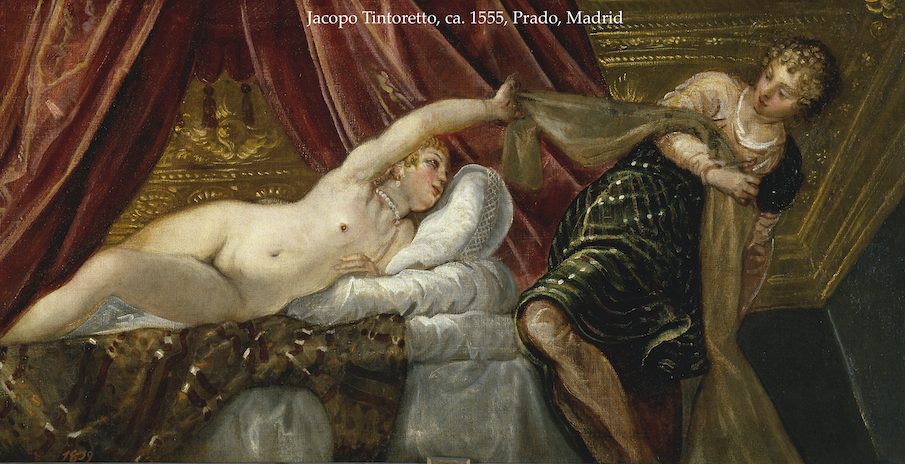 There are certain subjects that repeatedly appeared in European art throughout the centuries: the most popular were mythological or biblical ones. Among the latter, especially in the Old Testament, we have quite lot referring to the stormy relations between men and women. Those topics were very popular among artists of various epochs, although usually they did not end up in the altars. Such an example is undoubtedly „Joseph and Potiphar’s Wife.”

The story comes from the 39th chapter of Genesis: Joseph, son of Jacob and Rachel, sold by his brothers to Egypt, became a slave of Potiphar, the captain of Pharaoh’s guard. Potiphar’s wife wanted to have sex with Joseph, but he refused because he was loyal to his master, and he din’t want to sin against God. In this story Joseph is a righteous man, and Potiphar’s wife is a femme fatale.

Naturally, this story was a pretext to depict beautiful and usually naked woman, aggressively seizing a young man who tires to escape.

The point is that Joseph’s refusal was based purely on moral ground; the Potiphar’s wife was not ugly or repulsing. The print by Sebald Beham (dated 1526) clearly shows that physically Joseph would not have problems bedding his master’s wife. 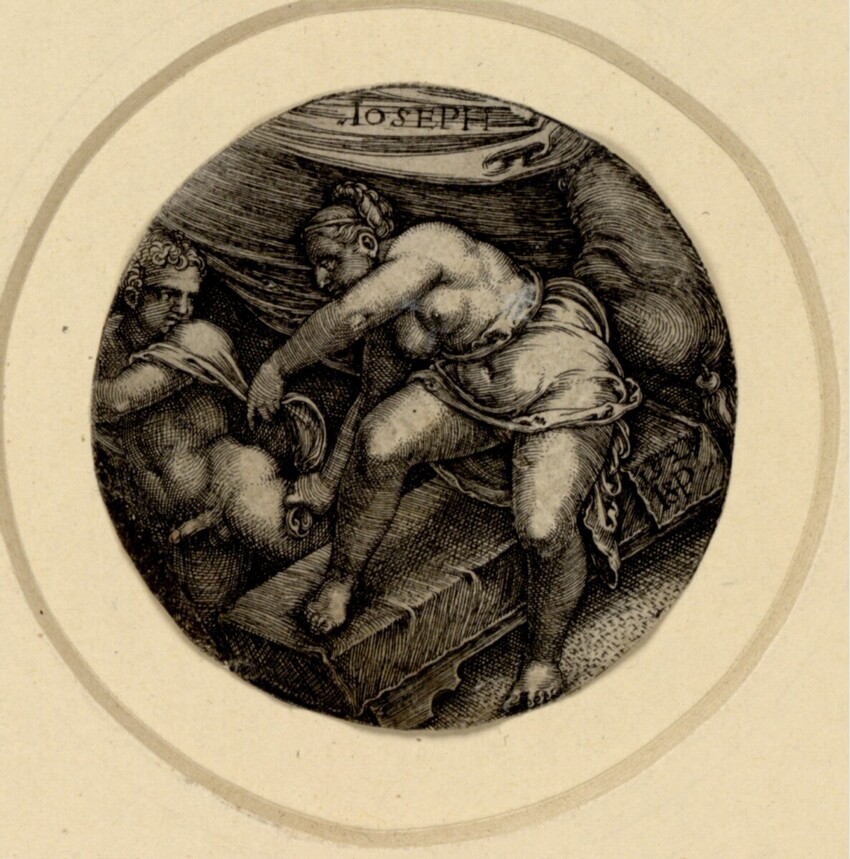 A woman chasing men has always been criticised because a man should be a hunter, not a prey. The thirteenth-century poem “Romance of the Rose” offers some explicit advice for ladies wishing to keep the interest of their lovers. It reads that not only a woman should not go after a man; she should also act a little, pretending that their affair puts her in danger:

„A woman who’s no simpleton

Must feign to be a coward, one

Who trembles much and doth appear

Anxious, distraught, and full of fear,

Whenever she receives her lover.

She should have him know, moreover,

Tis perilous to receive him,

Since her spouse, well, she deceives him,

(Or her parents, or her guardian)

And that she’d be dead for certain

If what she would do covertly

Were there for everyone to see.

She should swear he cannot stay

If it brings ill in any way,

And then, when she has enchanted,

He’ll remain just as she wanted.”

However, not all the images of a naked woman trying to pull escaping man into her bed depict Joseph and Potiphar’s wife. For example, in the manuscript of „Le livre de Lancelot du Lac” (France, ca. 1401-1425, Paris, Bibliothèque de l’Arsenal 3480, p. 33) we may see such a miniature, depicting an attempt to seduce Lancelot: 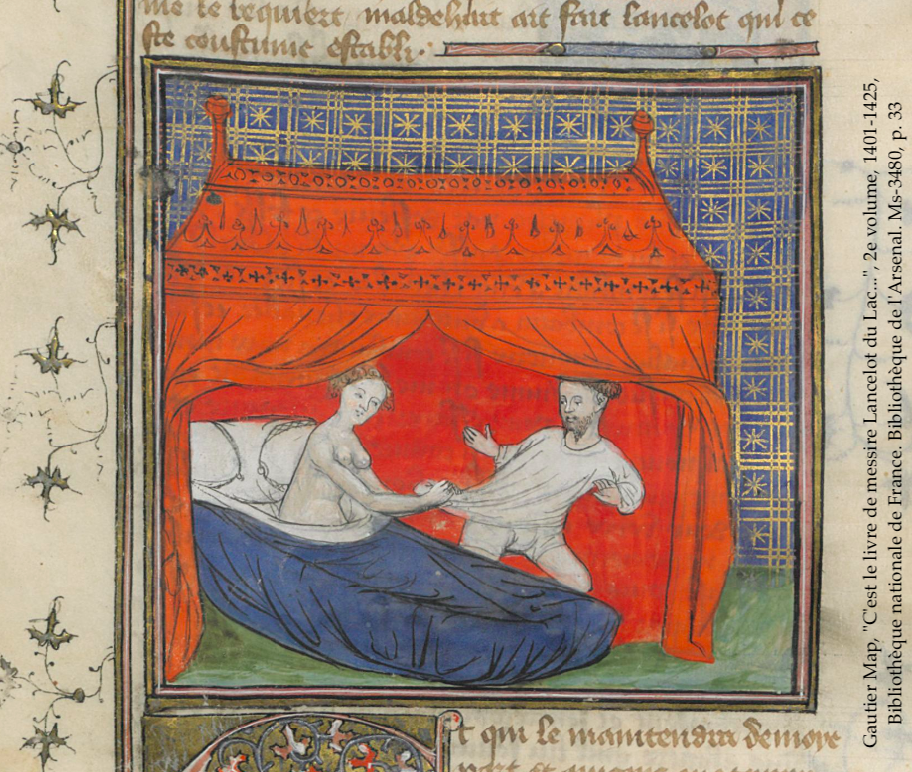 Lancelot was faithful to his beloved Guinevere (with whom he remained in adulterous relationship, as she was the wife of king Arthur, but that’s another issue). Many women loved Lancelot, though, and every now and then one of them tried to seduce him; e.g. enchantress Morgan, although to no avail (this miniature actually refers to her doings, depicting Lancelot and a seductive lady). The only one that finally succeeded was Elaine of Corbenic, but only because the witch helped her to trick Lancelot: he thought he was making love to Guinevere, while he in fact impregnated Elaine; when he realised his mistake in the morning, it was too late – but that is another story.

And finally, we may add here an interesting miniature from a manuscript of “Romance of the Rose” (1475, Bodleian Library, MS. Douce 195, fol. 118), also depicting a bit aggressive wife, whose husband seems to want to say: „honey, not tonight, I have a headache”. 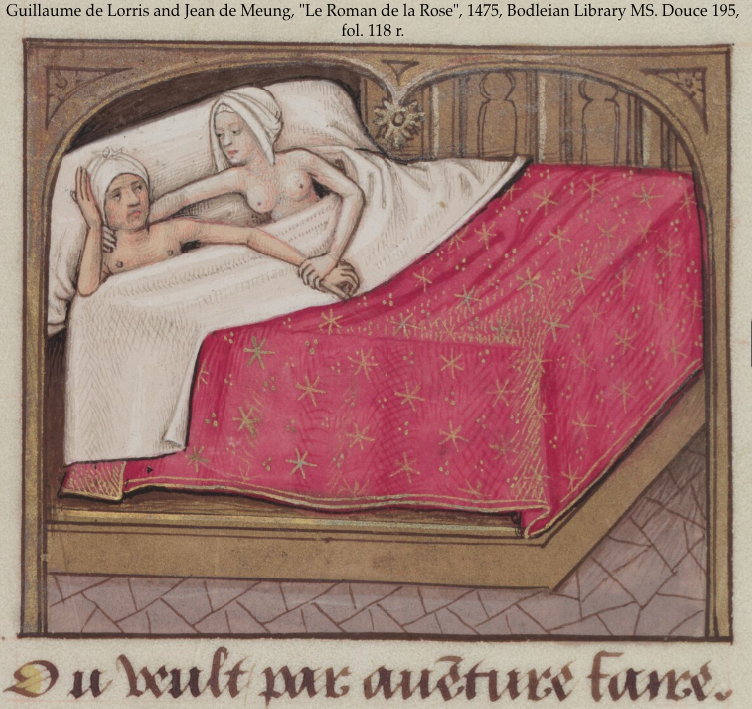 That is an illustration of a fragment telling about how wives manage to get the secrets out of their husbands. They plead, they cry, and they use their sexuality as a weapon: finally the husband gives up and reveals his secret, which the wife may later use against him.

All together, sadly, the message is clear: no-one should trust a woman who tries to seduce a man. In general, women are not trustworthy: they lie, they cheat, and they fake orgasms. And they are terrifyingly insatiable. After all, the medieval proverb quoted in “The Decameron” (Third Day, First Novel) stated: “a cock may very well serve ten hens, but that ten men are sorely tasked to satisfy a single woman”.  Some men just chose to make their escape in time. 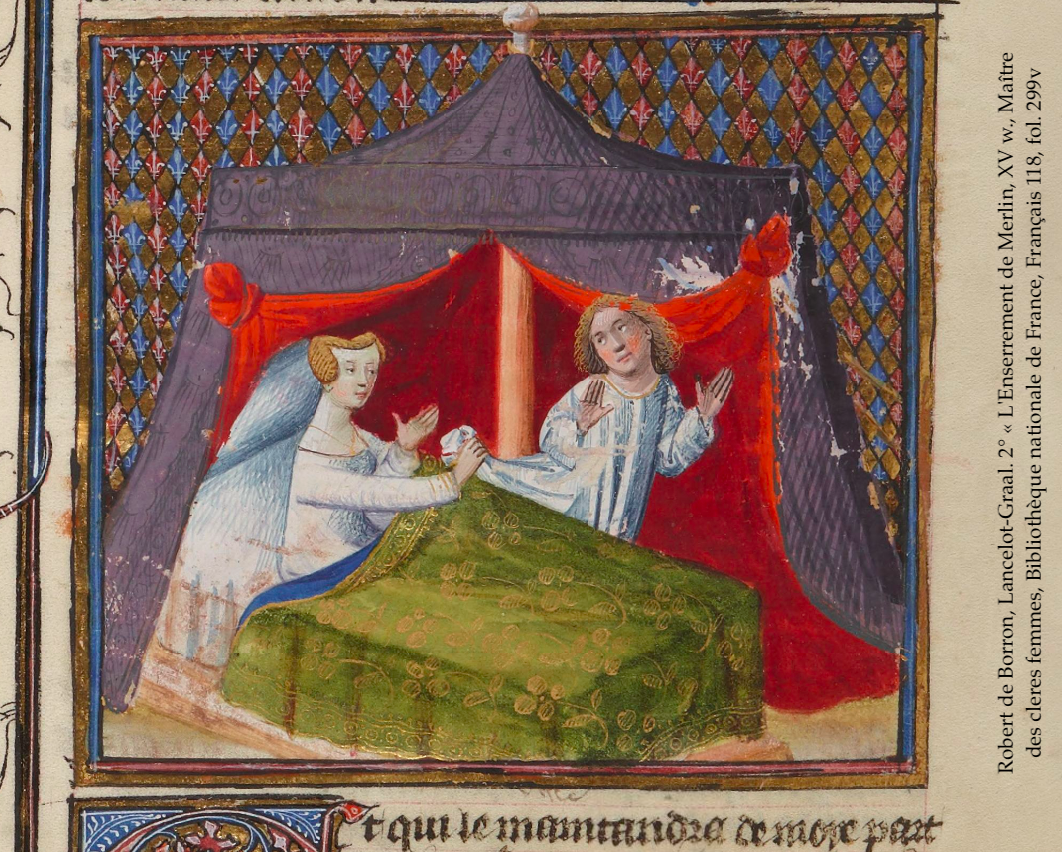