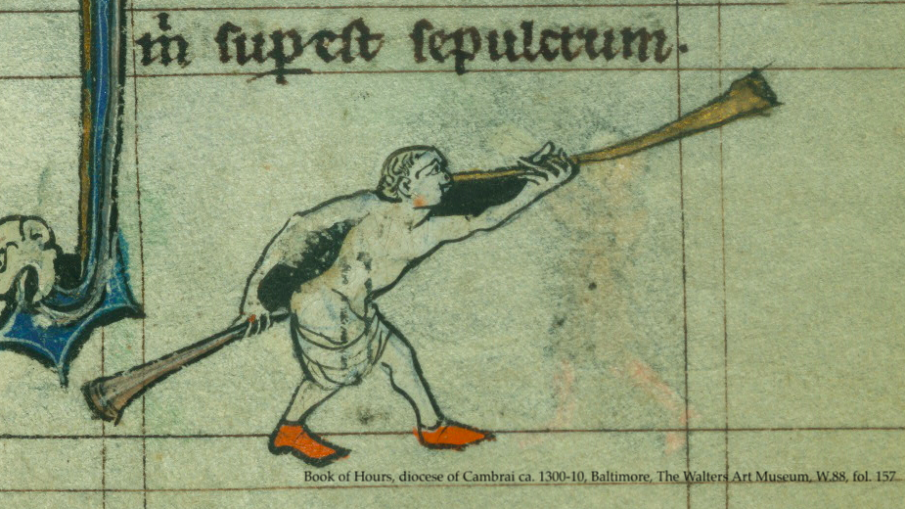 Some time ago I have written about “a butt song from Hell”, noted on backside of one of the damned in Hell, in Hieronymus Bosch’s Garden of Earthly Delights (post available HERE). Today I decided to get back to the musical motif in reference to… buttocks. 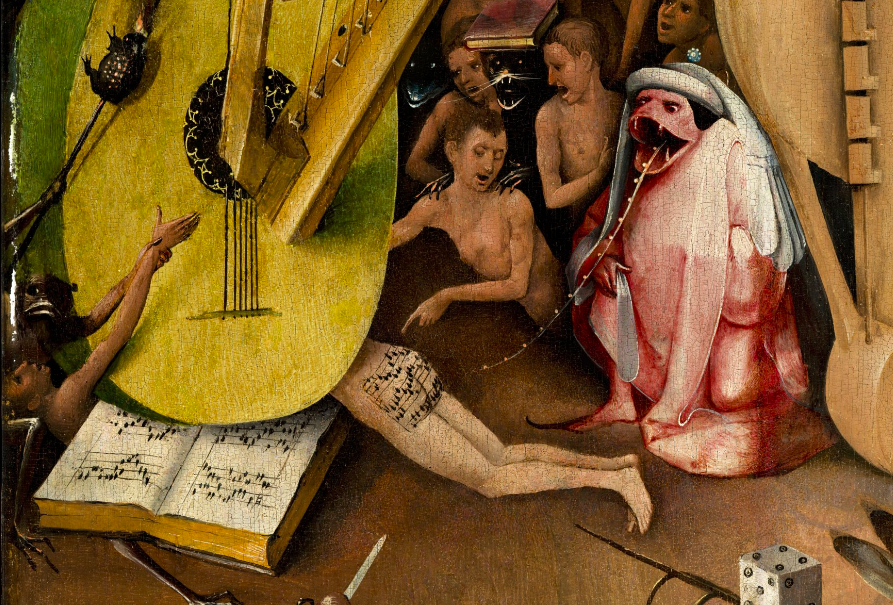 As it happens, there is a very interesting motif, repeatedly depicted in margins of medieval manuscripts: so called “butt trumpet” (“butt tuba”): literally, it showed people playing trumpet with their arses. It seems it was a popular visual joke of the Middle Ages. 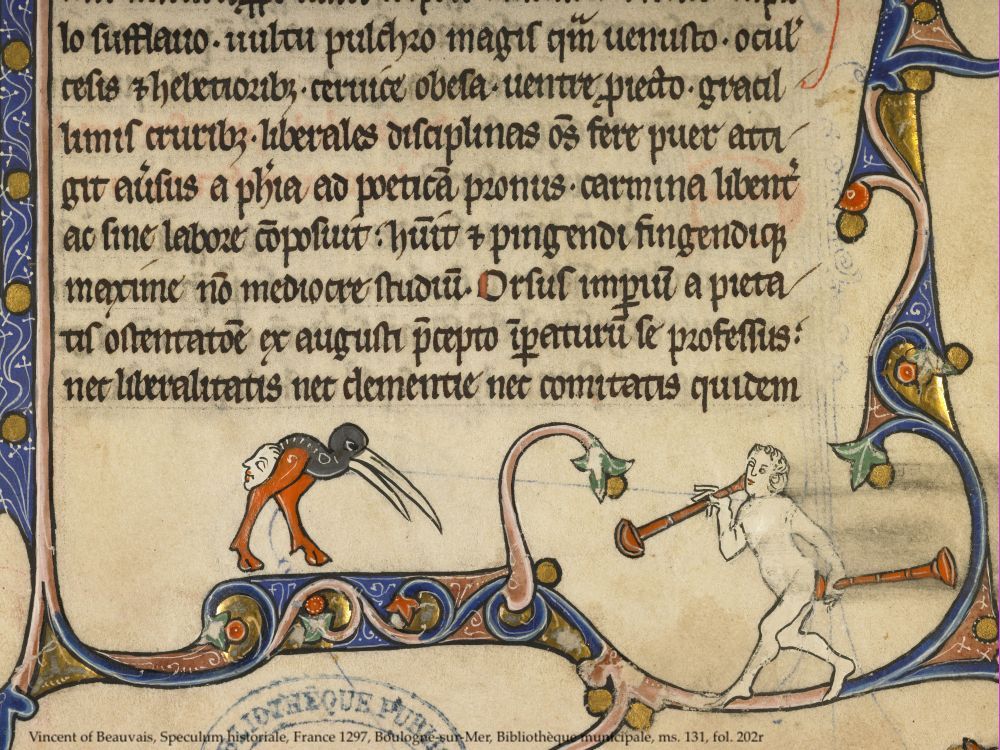 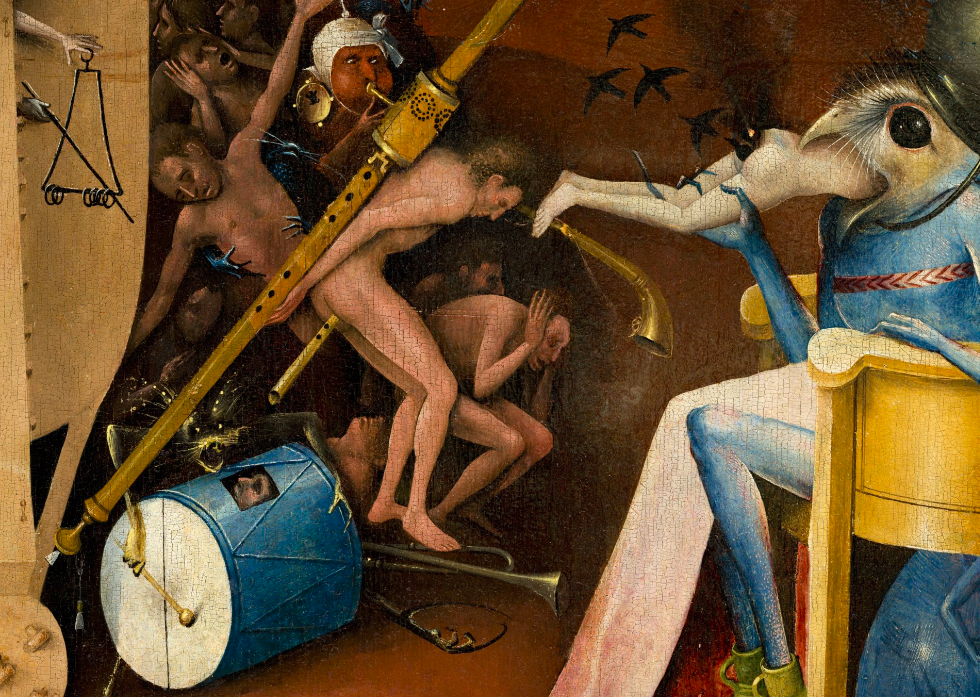 Music had a very important role in medieval image of the Universe. According to ancient cosmology theories, movements of celestial bodies were compared to sounds, composed into musical chords. Pythagorean ideas stated that distances between celestial bodies create sequences related to musical scale. Medieval cosmology widely used the term „celestial harmony”; the angels were supposed to be grouped into heavenly choirs. In general, depictions of angels making music were important details of medieval religious art. But sacred was often juxtaposed with profane; and so in the margins of medieval books we will find those holy motifs mocked, presented as grotesque or even obscene. Sometimes the butt blowing an instrument comes alone, without the rest of the body. 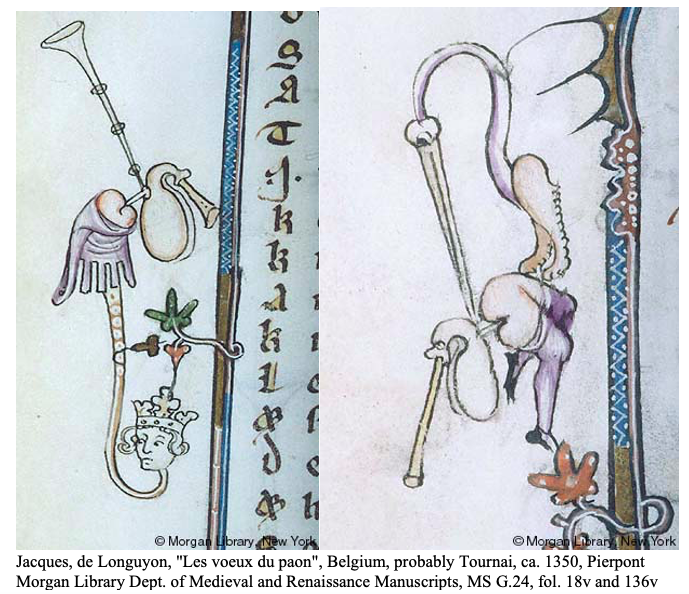 All together it may be assumed that blowing “from the rear side” was related to devil and sin: to the lowest desires that should be condemned. That is reflected for example in the “Divine Comedy” by Dante Alighieri: in Inferno (end of Song XXI) the devil summons his troupes in rather specific way – „ed elli avea del cul fatto trombetta”. Literally “he had made a trumpet of his asshole”. Interestingly, widely known old translations tried to put this line in slightly less rude manner; prose translation by Charles Eliot Norton (1891-1892) reads: “he had made a trumpet of his rump”, while much earlier version by Henry Francis Cary (1805-1814) makes it actually difficult to understand: “Which he with sound obscene triumphant gave.” Those do not reflect simply obscene character of the medieval original. 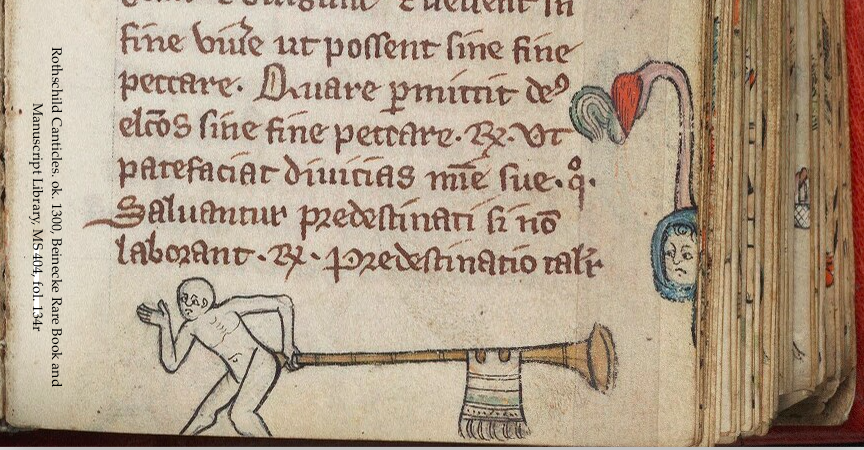 And here we get to the point that I would really like to discuss here: the thing is that our ideas about the Middle Ages are often deformed by the 19th-century… censorship! It is a kind of paradox: on one hand the Middle Ages were largely “re-discovered” in the 19th century, which resulted in renovating many medieval pieces of art and architecture, as well as in publishing well-revised editions of medieval masterpieces of literature. Artist of movements related to Romanticism often picked subjects taken from medieval legends, many of which were almost forgotten by then. But, on the other hand, medieval heritage was presented selectively then – adjusted to expectations of a rather prim society of the 19th century. And so the myth of the Middle Ages has been created: a false image of an epoch that was pious, heroic, chivalric and religious. Remarkably, also harmful stereotypes about the Middle Ages were confirmed, such as considering it the dark ages, the times of dirt, filth and brutality; even though many of those stereotypes were actually rooted not in medieval, but rather in the Early-Modern events and customs (e.g. witch-hunt, or lack of hygiene).

I hope that my blog fight those stereotypes. I wish everyone discovered how interesting Middle Ages were: how colourful and lively. Medieval visual culture was sometimes truly bawdy and less prudent than our contemporary one. And for sure it was often simply funny. 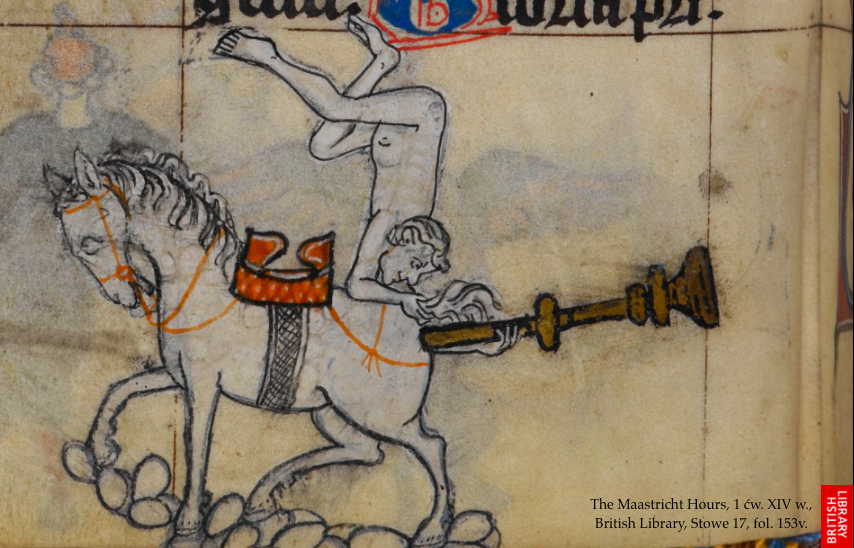 But now: watch out! You should trust only verified blogs! When I was collecting illustrations to this post I came across several photoshopped images, putting butt trumpets into medieval pictures that do not really contain that motif! We like to seek for sensation, and apparently for some people it is easier to create a fake image than to make a thorough research through digitalised manuscripts. And unfortunately, once such a fake is published in the Internet, it goes viral and is shared in good will.

And that is why in this blog all images are described: in case of manuscripts I give shelfmarks and page numbers, so everyone can check the source material. It takes some time, but I take my blog seriously and I keep my academic approach. So, here goes a gallery of “fake butt trumpets” found on-line, juxtaposed with original manuscript decorations: 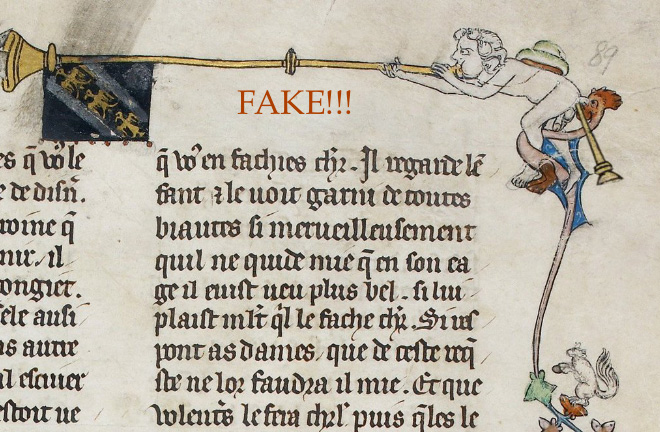 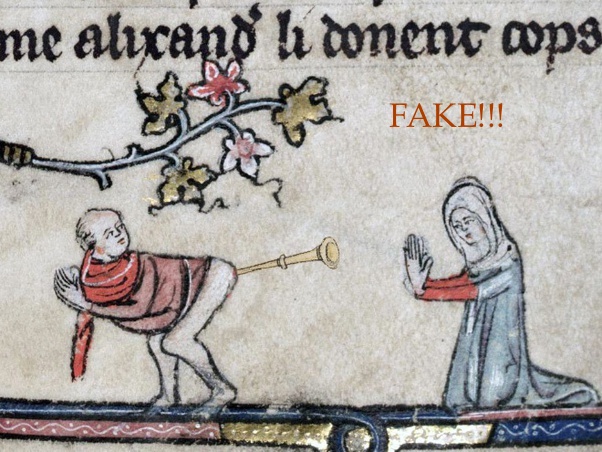 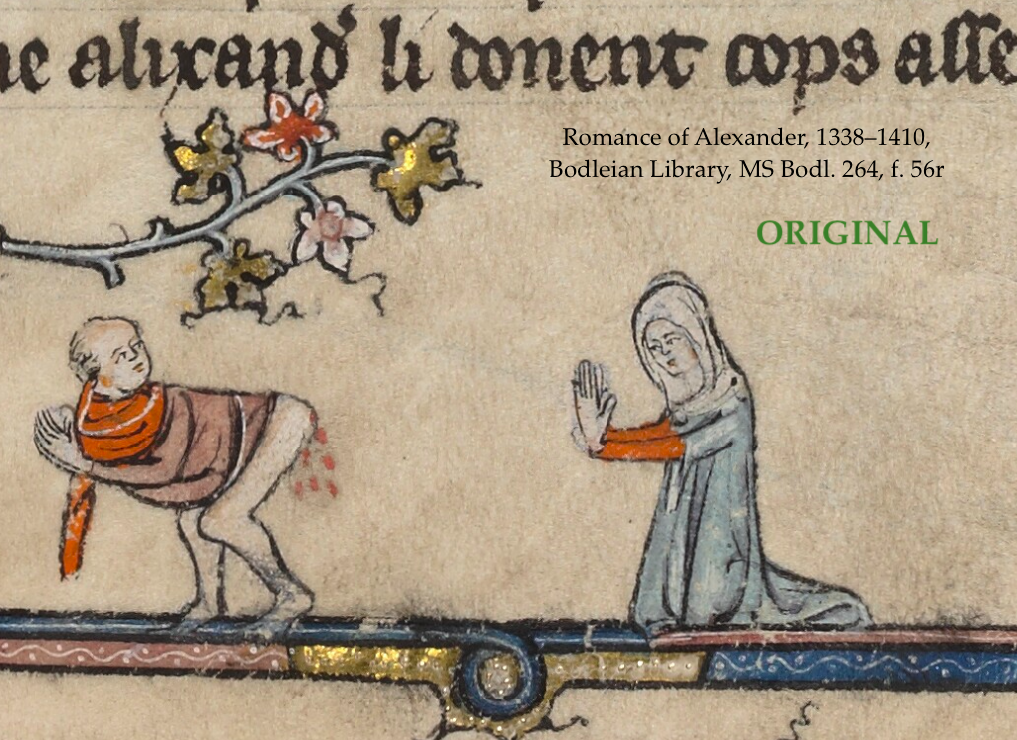 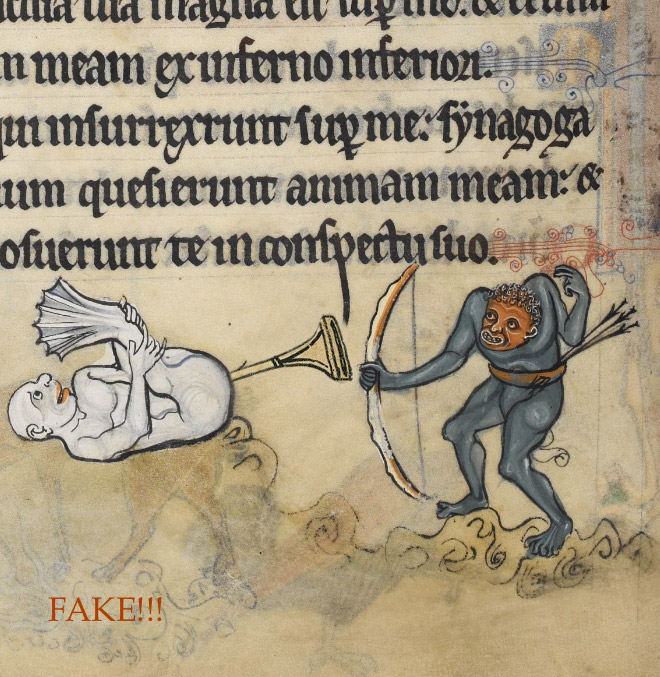 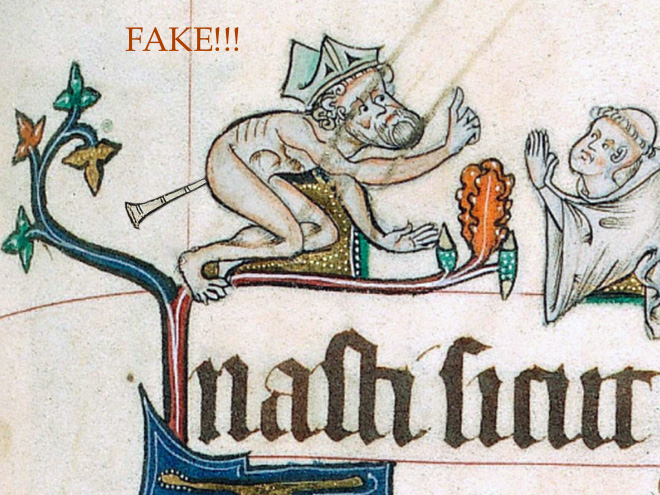 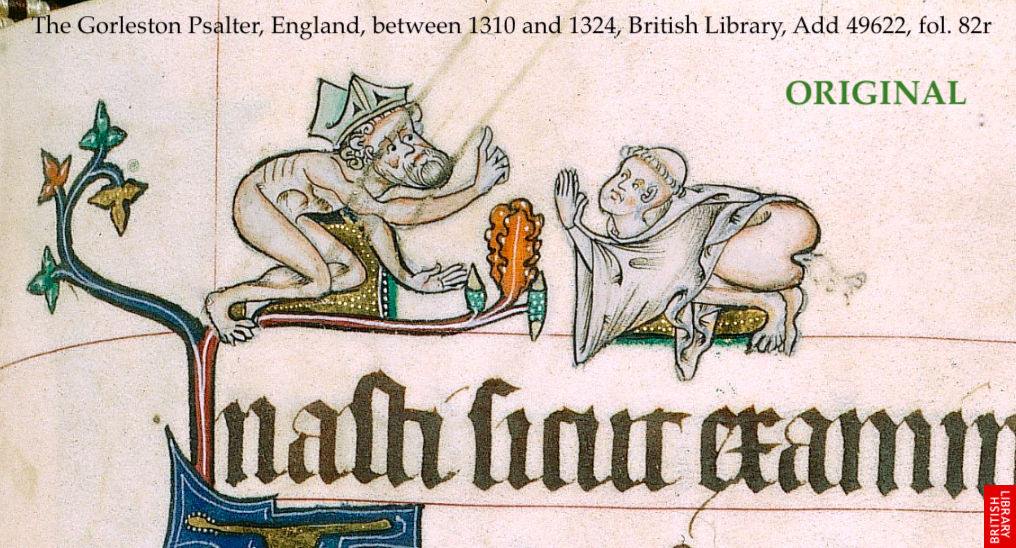 Why would someone produce such fakes remains a mystery to me. The originals are no less obscene, they just do not contain this particular trumpet motif. What kind of medievalist’s trolling is this? I have no idea. But the fact is that lots of articles reproduce those fake images; I even came across set of coasters on sale online, decorated with those pictures. Can someone explain this to me? 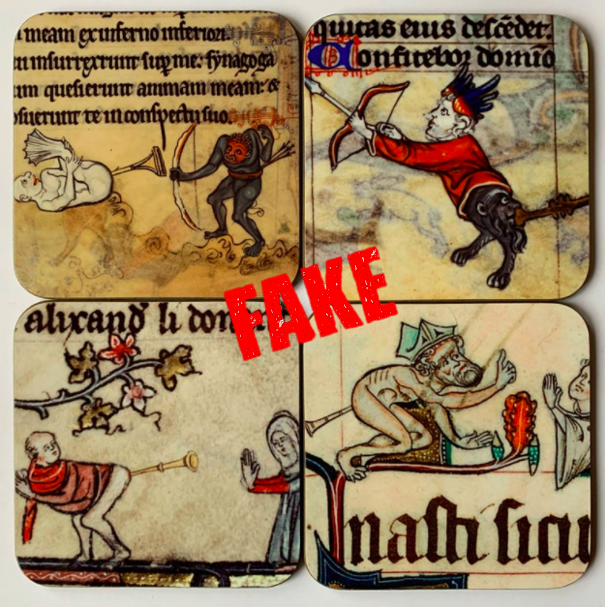