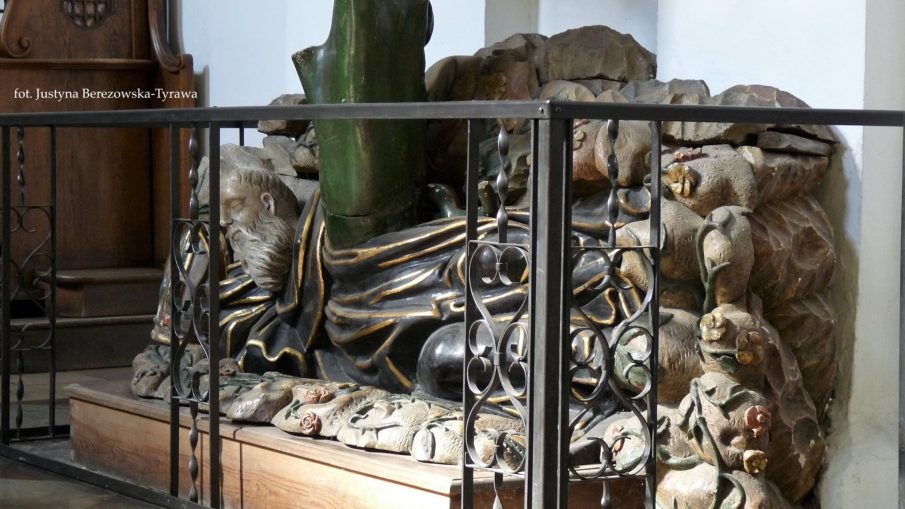 In Central Europe, churches’ furniture dating back to the 17th and 18th centuries may often be a source of very interesting curiosities. For example, let’s take a look at pulpits: they sometimes had extremely weird shapes, as well as complex theological meaning. Some time ago I wrote about whale-shaped pulpits (post available HERE) and today I would like to tell you about a pulpit from St Michael’s church in Sandomierz (Poland).

Have you ever been told in your childhood that if you swallowed a seed, a tree would grow in your stomach? Well, it seems that happened to St Benedict, whose statue lies at the bottom of the pulpit. Apparently, there is a tree coming out of his belly. 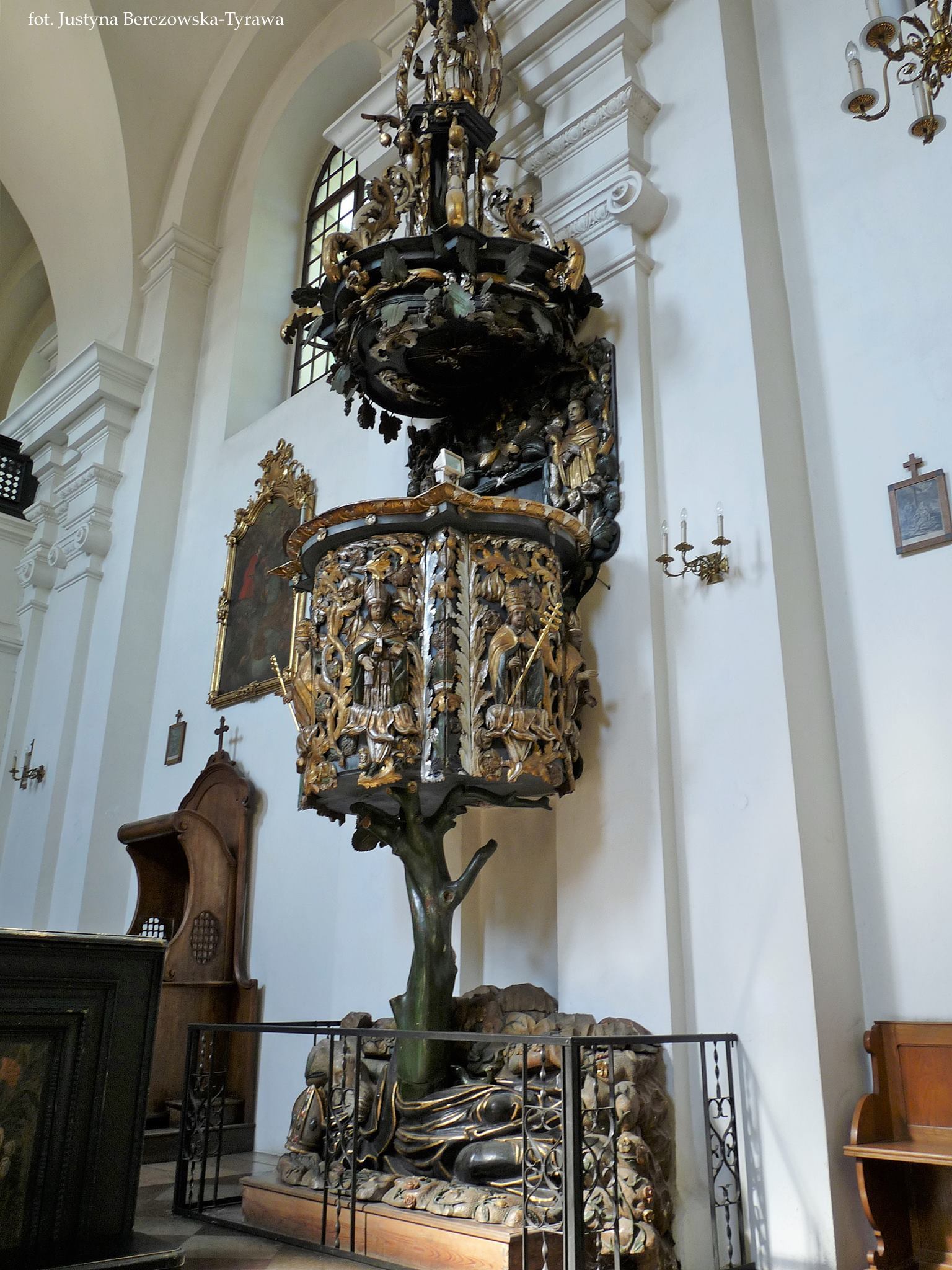 St Michael’s church in Sandomierz used to belong to Benedictine nuns – until 1903, when the convent in Sandomierz was dissolved. Benedictine nuns first came here in 1615, and the church had been built from 1686 to 1693. At the time of consecration abbess of the monastery was Anna Chrząstowska (d. 1709), who commissioned the pulpit in question. A contract for this commission survived: it was signed with a woodcarver from Nowy Korczyn, Mateusz Roskwitowicz, in November 1694. It covered various pieces that were supposed to be completed by the Pentecost in 1695.  The contract includes quite detailed description of the commissioned pulpit; apparently, the abbess knew exactly what she wanted, and the artist had almost nothing to say about the pulpit’s shape and decoration programme:

“of our convent there should be nine founders, that I have described separately, including their dresses and what they should hold, and all those saints should be depicted in roses. […] six around the pulpit and two on priest’s sides, and one big on the top of the dome, while in the centre there are some angels. The whole pulpit is supposed to be covered in wine-bush, as well as both domes […] covered with grapes, well sculpted, deep, and on top of the bush there should be pelican’s nest with pelican and three young, and their proportion should be measured well so they would be properly visible. Under the pulpit there should be St Benedict lying on a rock, and the bush should grow from his chest, the rock should be wide, deeply stone-like, decorated with flowers and little trees, among which horizontal thorns should crawl, as it is described in design, also the doors of the pulpit should be adorned with beautiful sculpture”

The pelican on the top of the pulpit is a eucharistic motif: according to the medieval bestiaries, pelican fed its young with its own blood, ripping its chest open. It is a reference to Christ, who feeds us with his own blood and flesh in Eucharist. 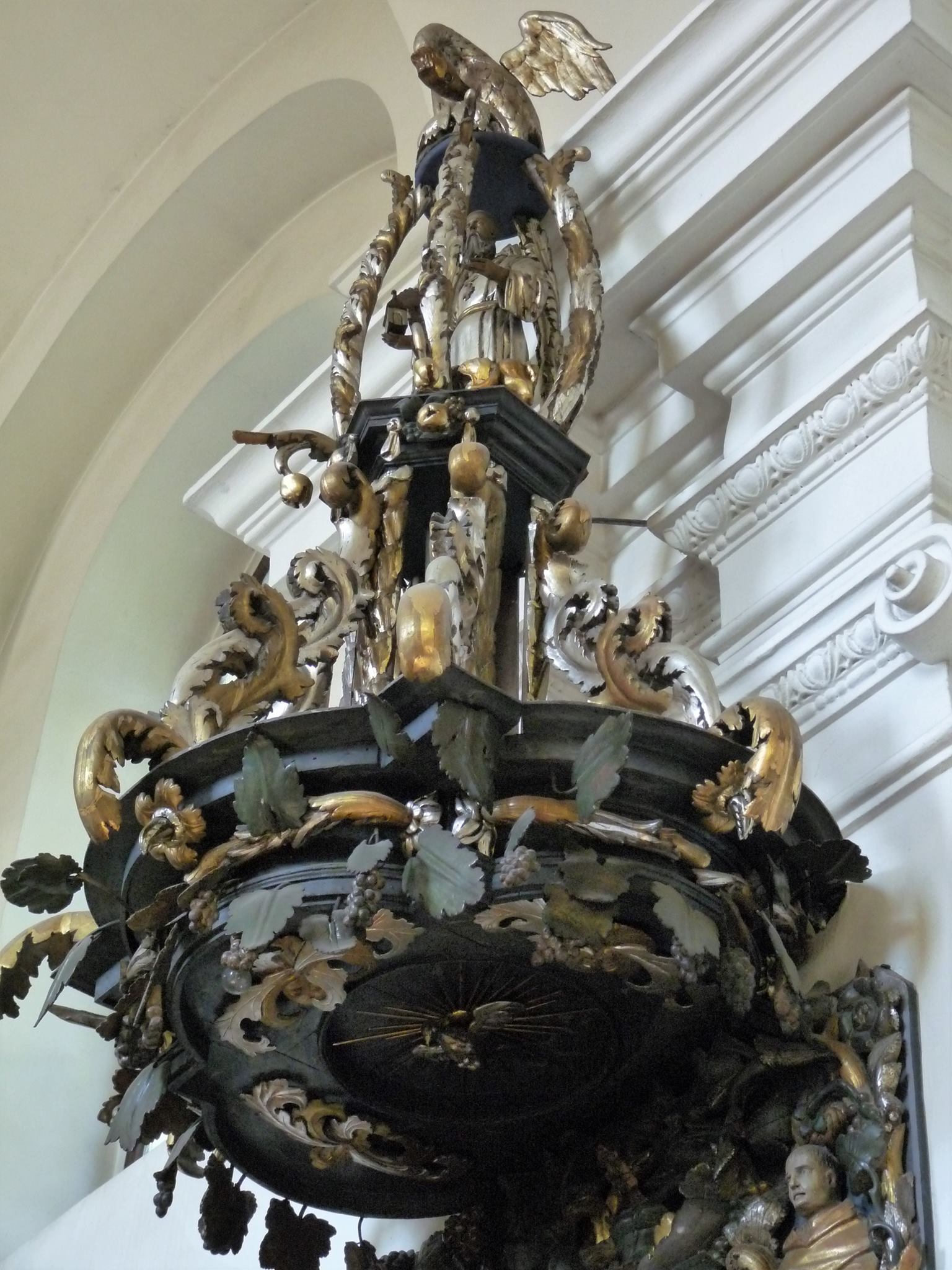 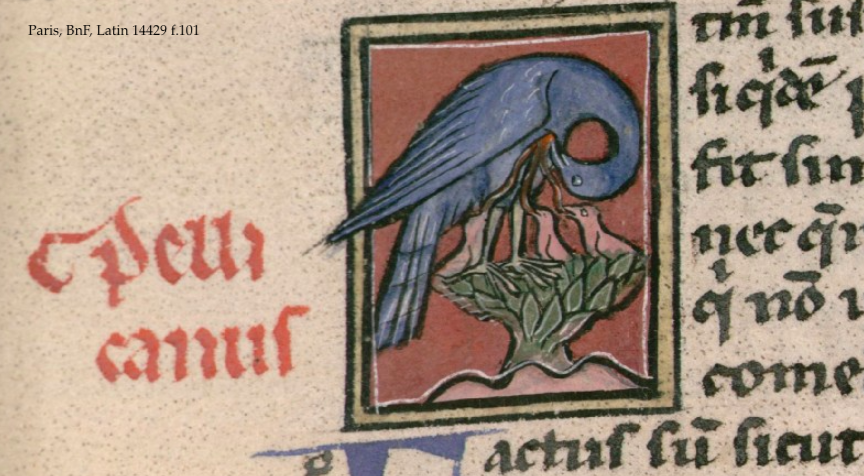 The rest of the pulpit depicts “genealogy” of Benedictine order: a family tree rooted in the chest of the order’s founder, St Benedict. The tree is actually a grapevine bush, containing depictions of Benedictines and the Fathers of the Church. The motif of “genealogy” of religious orders was popular in Early-Modern art; of course in each case the founder was different (St Dominic for Dominicans, St Francis for Franciscans, etc.). 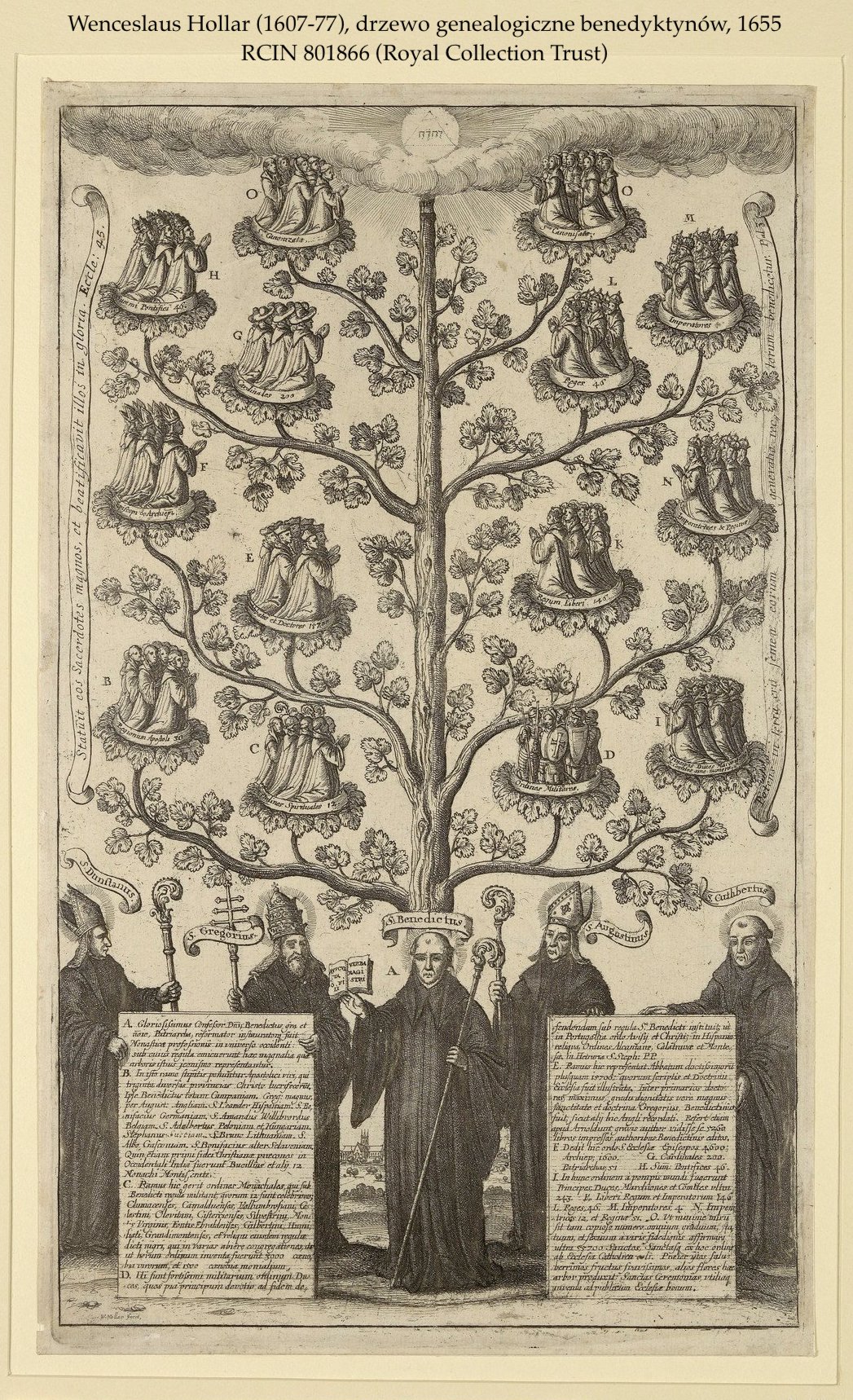 A source of inspiration for all those images was the Tree of Jesse, that is a family tree of Christ himself. The Messiah was said to descent from the Davidic line, and Old Testament king David was the son of Jesse. According to prophet Isaiah: “And there shall come forth a rod out of the stem of Jesse, and a Branch shall grow out of his roots” – that is why in art Christ’s family tree was depicted as growing out of Jesse’s stomach. One of such examples is another 17th-century Polish pulpit, in the Poor Claires’ church in Stary Sącz (before 1672): 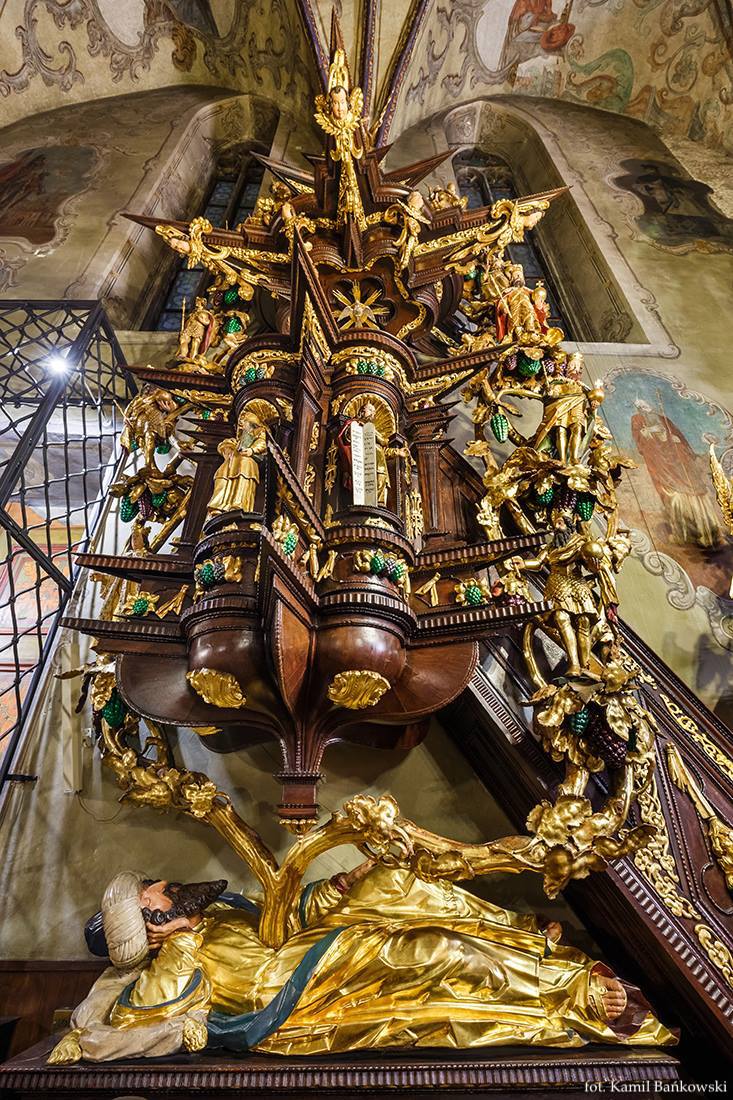 It is very likely that the Stary Sącz pulpit inspired abbess Anna Chrząstowska to design her own, Benedictine version. Unfortunately those extraordinary Polish baroque pulpits are not well known around the World – but perhaps this post will change it? Please share it and help me spread the word about amazing 17th-century pulpits from Lesser Poland!

The quote from the contract, translated by me, is originally in Polish, and I took it from an article by Anna Szylar: „Kościół św. Michała w Sandomierzu. Fundacja i dzieje świątyni do kasaty klasztoru benedyktynek w 1903 r.”, Nasza Przeszłość, t. 99, Kraków 2003, 215-257. I thank Justyna Berezowska-Tyrawa and Kamil Bańkowski for letting me use their photos in this post.