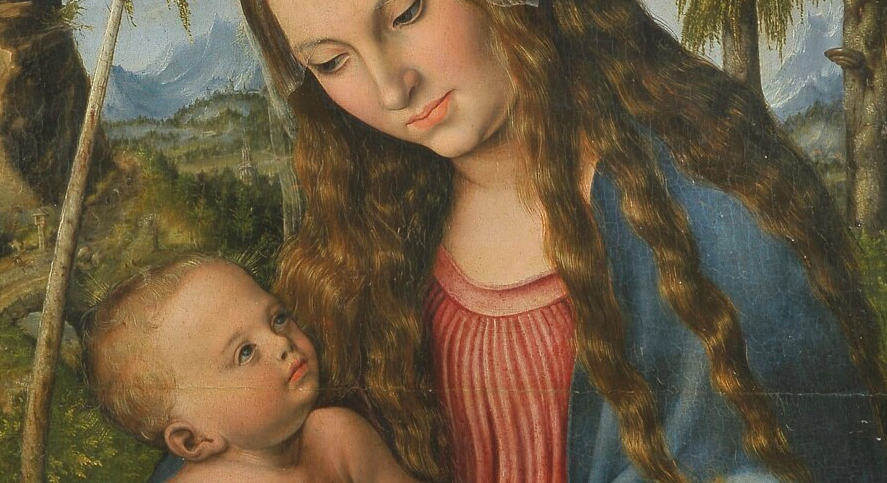 Today I would like to tell you about my on-line work in the times of pandemics, when I am supposed to write an article about a painting on a few days notice. The text was supposed to have been about “Madonna under the Firs” by Lucas Cranach the Elder, commissioned by Tygodnik Powszechny. The subject is related to the fact that right now this painting is temporarily exhibited at the National Museum in Wrocław, during the renovation of Archdiocese Museum in Wrocław, which owns this artwork. 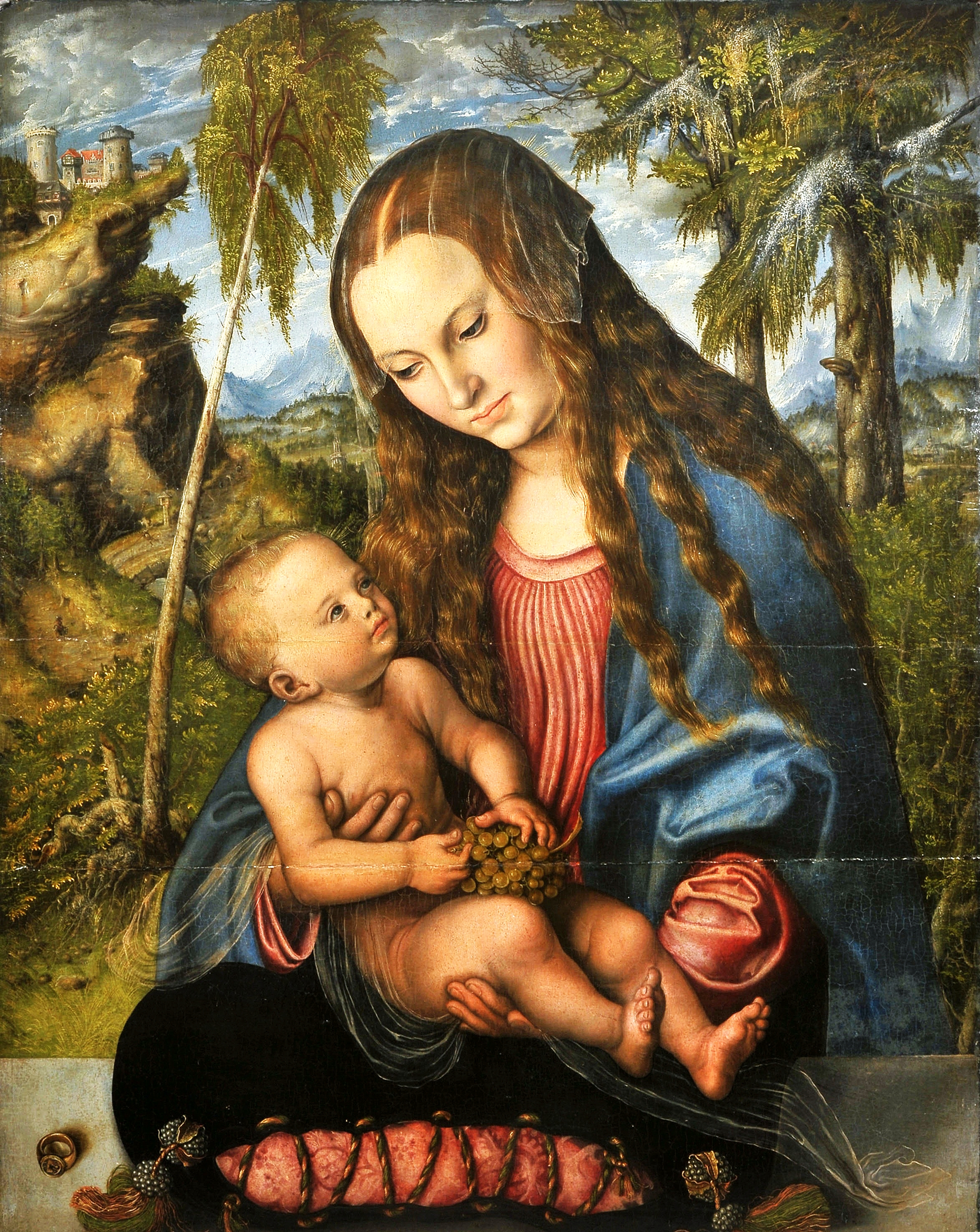 My main problem was that first of all currently access to the libraries is limited due to pandemics, and second of all I am right now out of Poland anyway (if you watched my YouTube videos you know it is Znojmo, Moravia, southern Czechia). So basically all I have is the Internet: Google Books, publications uploaded by the authors (e.g. in academia.edu) and scanned journals available in digital libraries.

I never really trust press notes, and I am very careful about articles in Wikipedia, although sometimes they may not be entirely bad (especially those with elaborated footnotes, referring to solid scholarly publications). In general I assume though that notes published on museum’s websites should be trustworthy: they should be written by curators familiar with the most up-to-date research on particular artwork. Unfortunately, that is not always the case.

In case of this Madonna by Cranach it is known that the painting has been in Wrocław cathedral since the 16th century – that is the only information on its early history given by the service lucascranach.org. The painting is dated ca. 1510 – it is an early work, but it already bears Cranach’s Heraldic Letter, granted to him by the elector Friedrich III the Wise in 1508: a winged and crowned serpent with a ring in its mouth. I suspect the painting may have been completed not long after that event, as the sign is placed on a seal ring painted in the left lower corner of the picture, along with artist’s initials L.C., depicted as mirrored. It is likely that Cranach acquired such a ring when he got the seal to use. 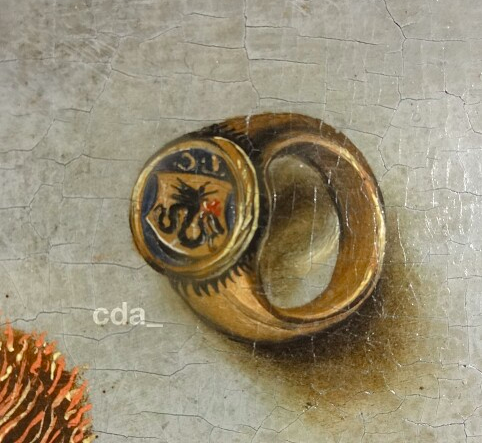 Some publications state that the painting “Madonna under the Firs” was commissioned by the Wrocław bishop Johannes V Thurzo (d. 1520). Meanwhile, at the website of the National Museum in Wrocław we may read: “The picture of Madonna and the Child was commissioned for the cathedral in Wrocław by dean Joachim von Lindlau in the 16th century.” The painting is also described as “painted especially for the city of Wrocław”. 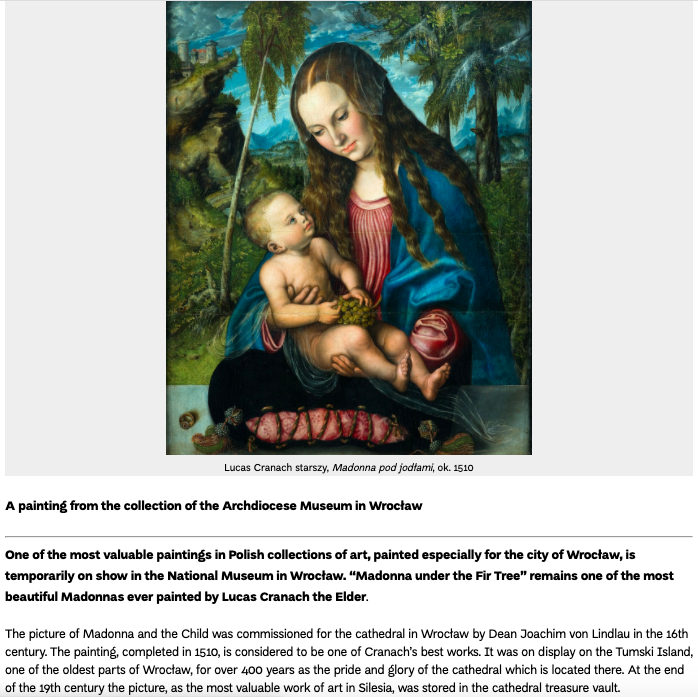 A very similar information may be found in an article by Paulina Barysz „Dwie Madonny – jedna historia” published in service Rynek i Sztuka: 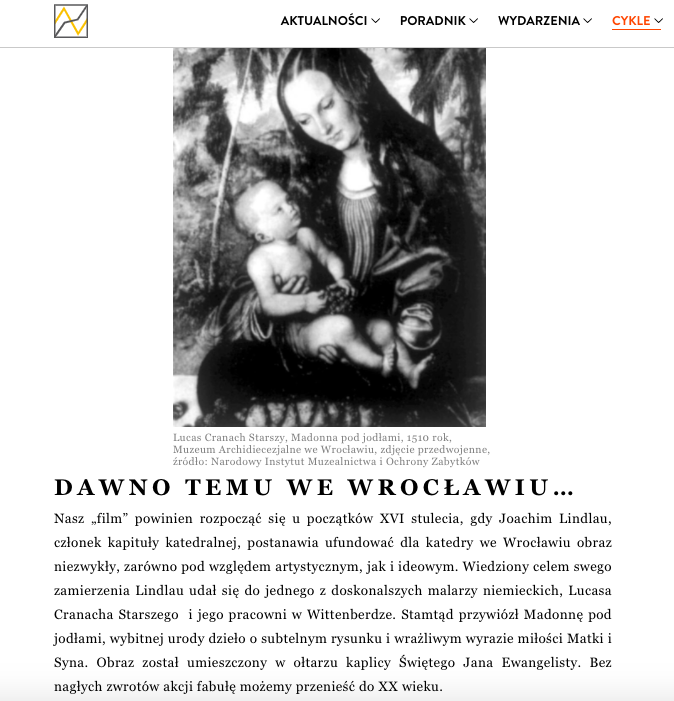 That made me wonder. I only found Joachim Lindlau (d. 1565) in one book (Erich Wiese, “Biedermeierreise durch Schlesien”, 1966) in reference to Glogau Madonna – so I assumed it was about Joachim von Liedlau, the dean of Wrocław cathedral and parish priest of church in Glogow [Glogau], where he donated aforementioned Madonna, also by Lucas Cranach the Elder (1518). It is a looted work of art (we know it is kept in the magazines of The Pushkin State Museum of Fine Arts in Moscow, but we still can’t get it back). That Glogau Madonna was acquired by von Liedlau in 1555 (3 years after Cranach’s death). Most of the publications mention Liedlau’s death in 1565 and the fact that he was buried in the church in Glogow. It seemed unlikely to me that he would be able to commission painting for the Wrocław cathedral as early as ca. 1510 – but to be sure I had to find his bio.

This kind of information is often collected in publications dating back to the turn of the 19th and 20th centuries. Good news is that those articles are often digitalised. Bad news is that Google often misses the content of scanned journals available in digital libraries.

In such case we have to work gradually. First, we search for particular phrase in Google Books. It often comes out as a preview of particular book of journal, available only in fragments. 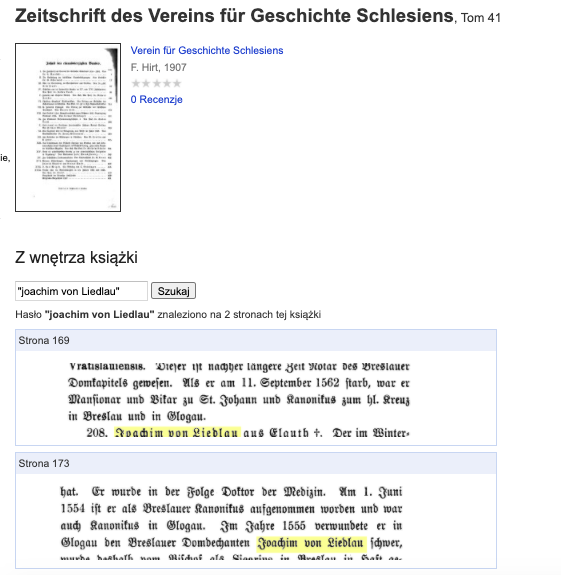 But that is enough to know the tile of journal, as well as issue number, year and page numbers, so we can search for it in digital libraries. In this case it was an article by Gustav Bauch, „Schlesien und die Universität Krakau im XV. und XVI. Jahrhundert” in  „Zeitschrift des Vereins für Geschichte Schlesiens. Namens des Vereins unter Mitwirkung der Redaktionskommission” (1907, Bd. 41), that I have found at Śląska Biblioteka Cyfrowa (Silesian Digital Library). And so I got the bio of Joachim von Liedlau:

A man who has been a student by the end of 1530s and became a canon at Wrocław cathedral in 1551 most likely did not commission a painting for this cathedral as early as ca. 1510.

But has the “Madonna under the Firs” indeed been commissioned especially for the Wrocław cathedral?

In the article by Monika Kuhnke „Tajemnicze losy Madonny pod jodłami Lucasa Cranacha starszego” (“Cenne Bezcenne Utracone”, 1999 r.) I found an information that „the painting has been given to bishop Johann Thurzo by Johann Hess”. That, again, creates a chronological problem, as Johann Hess became a notary at Thurzo’s office as late as 1513. Of course at this point I would like to take a look into a book by Aleksandra Szewczyk „Mecenat artystyczny biskupa wrocławskiego Jana V Thurzona (1506-1520)” (2009), but currently this publication in not available to me; it does not even have a preview option in Google Books. In this situation I decided to get back to the early-20th century literature: I looked up another article by Gustav Bauch: „Johann Thurzo und Johann Hess”, in „Zeitschrift des Vereins für Geschichte und Alterthum Schlesiens” (1901, Bd. 36, H. 1). It contains information that Johann Hess brought from Wittenberg painting by Cranach for bishop Thurzo… but it was “Flagellation of Christ”! Already working for Thurzo, Hess briefly visited Wittenberg in 1517, and in 1518 Caspar Ursinus Velius send him four poems he wrote, referring to that Flagellation by Cranach. Apparently by that time the painting has already been in Wrocław. 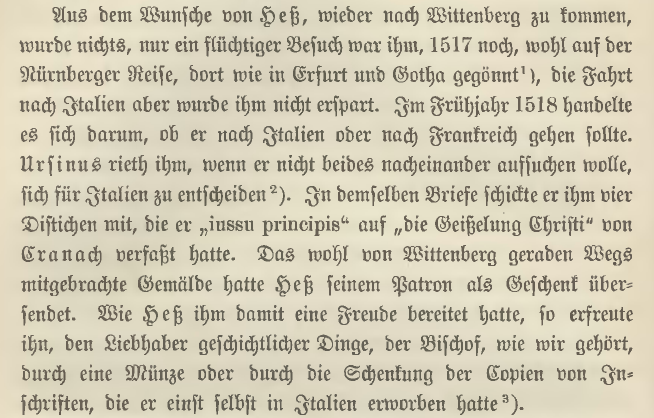 Just to be sure I decided to ask my friend for help – I now very much thank Wojciech Kieler, who sent me photos of catalogue note for this painting from the exhibition catalogue “Moda na Cranacha” of the National Museum in Wrocław (2017). In fact those exact pages are actually available as a preview of this publication at the National Museum’s website, but the quality is rather poor and it is hard to read. Anyway, the note (written by Aleksandra Szewczyk) reads: “Madonna under the Firs belonged to the Wrocław bishop Johann Thurzo (1464/1466-1520). Along with another painting by Cranach, Flagellation of Christ, it was brought from Wittenberg in 1517 by then secretary of the bishop, later reformer Johann Hess (1490-1547). By the wish of Thurzo a poet Caspar Ursinus Velius wrote two latin poems (dedicated to the Virgin and flogged Christ) that enhanced connection between those two paintings, creating a theological-ideological diptych.” 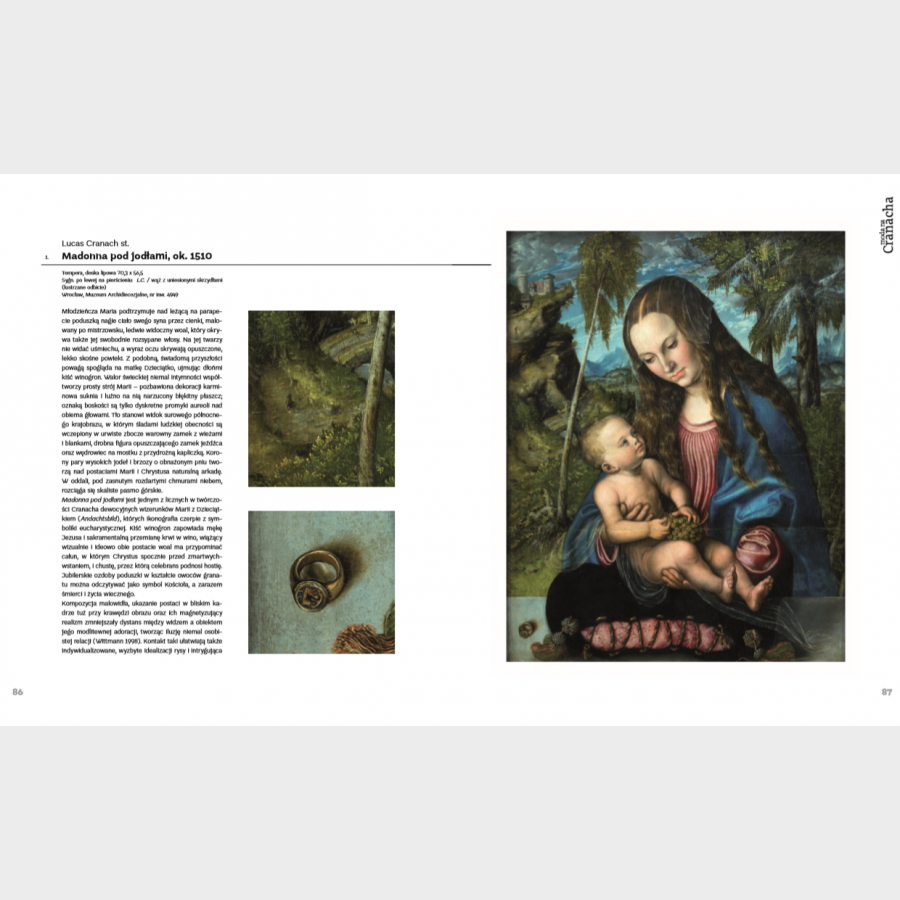 So it seems that “Madonna under the Firs” by Lucas Cranach the Elder was not, after all, created especially for the Wrocław bishop – otherwise he would probably have it earlier than over 7 years after it was completed.

And this post on my blog is not only to show you how I work when I have no access to the libraries, but mostly to prove that writing a popularising article does not require less research than a proper scholarly paper. I dedicate this post to all those colleagues who think that popularising is some kind of hobby, to be done effortlessly and after hours. Creating a text written with less academic language and with no footnotes may still require reading several German articles, some of which have been printed with fraktur script.

I have just noticed that the note I quoted above (from the website of the National Museum in Wrocław: https://mnwr.pl/en/madonna/) has been updated and it no longer looks like the screen in my post. Now there is no mention about the painting having been created especially for Wrocław and no information on Joachim von Lindlau. I am flattered if it means someone from the Museum is reading my blog, and I am happy if this post contributed to correcting information given by the Museum on this splendid artwork.