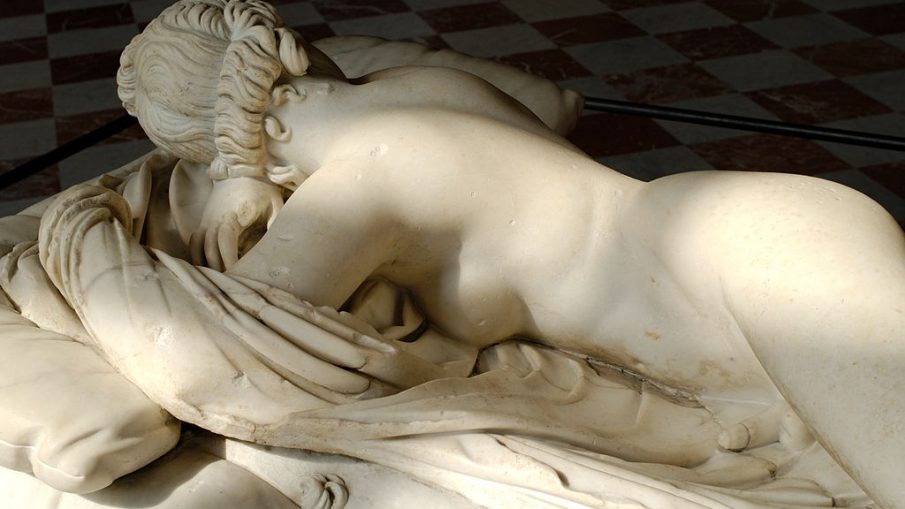 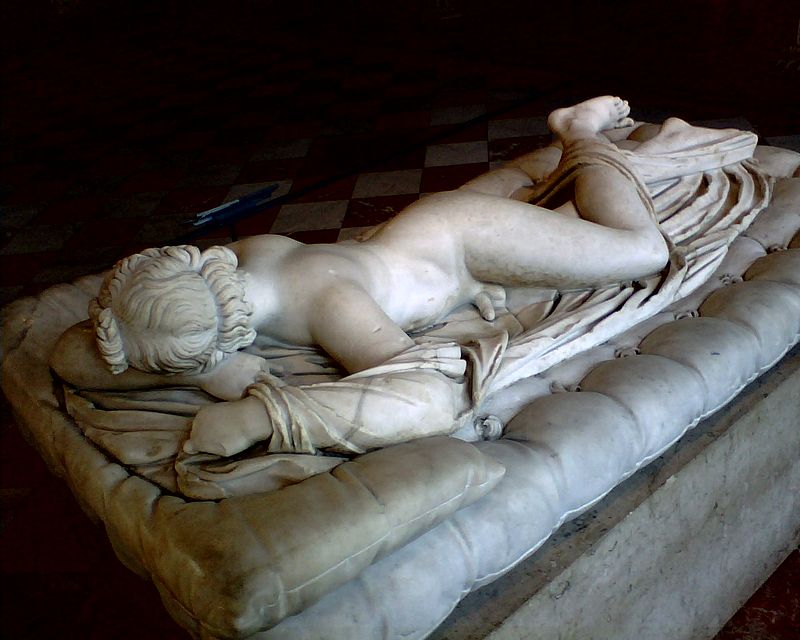 Mythical Hermaphroditus was a son of Hermes and Aphrodite; according to Ovid, he was a beautiful boy who attracted water-nymph Salmacis. He rejected her, but she asked the Gods to let them be united forever – and so they merged into one creature, one body both male and female. Cult of Hermaphroditus was related to certain wedding customs; it seems that this deity impersonated, among others, the idea of union of man and woman in matrimony. 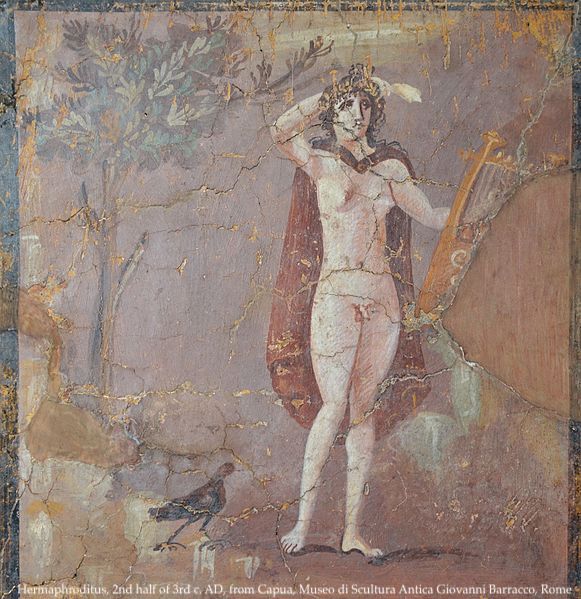 The sculpture was discovered in the first decades of the 17th century in Rome, near ancient Baths of Diocletian and immediately it was secured by Cardinal Scipione Borghese. He collected quite a lot of art in his Villa Borghese, and to this Hermaphrodite he dedicated a separate room. He also commissioned sculpted mattress – it was completed by famous Gian Lorenzo Bernini. The mattress seems quite contemporary even today; as we know from the written sources, in the 17th century the Cardinal’s guests used to sit on it, mistaking the marble sculpture for a real mattress. 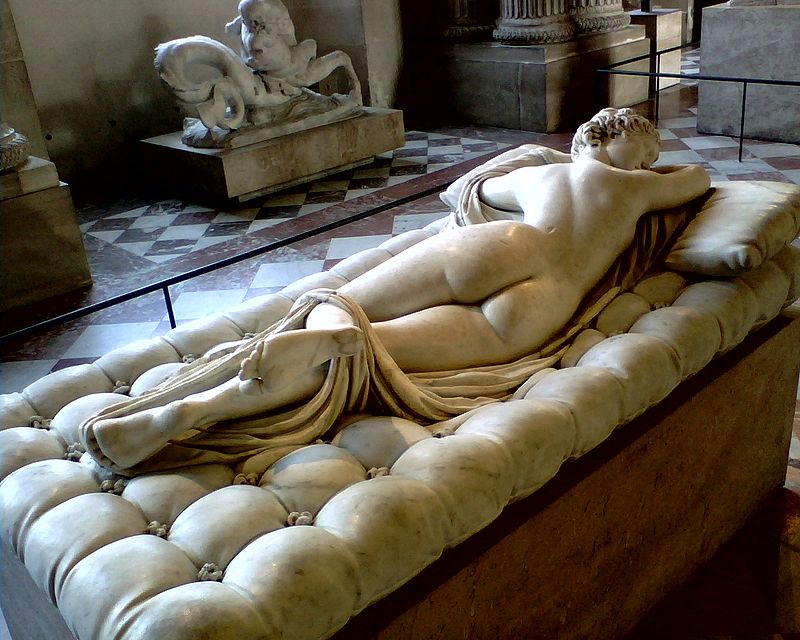 It seems that Cardinal Borghese was not bothered by unisex (transsexual?) mythological character. Interestingly, merging sexes also occurred in Christian art back then.

For example, let’s take a look at St John the Baptist by Leonardo da Vinci (ca. 1513-16, Louvre, Paris). It is basically a depiction of a man with female head.

The face of St John in Leonardo’s painting is completely out of traditional Christian iconography. He should be depicted as a hairy and wild man: of long hair and long beard and mustache. Clean shaven was another John, the Evangelist, the youngest disciple of Christ. Naturally, there is no way Leonardo da Vinci confused two such prominent saints. I am quite sure that he depicted John the Baptist on purpose as a man of female face – that is, as a person of unidentified gender. That may actually make theological sense. 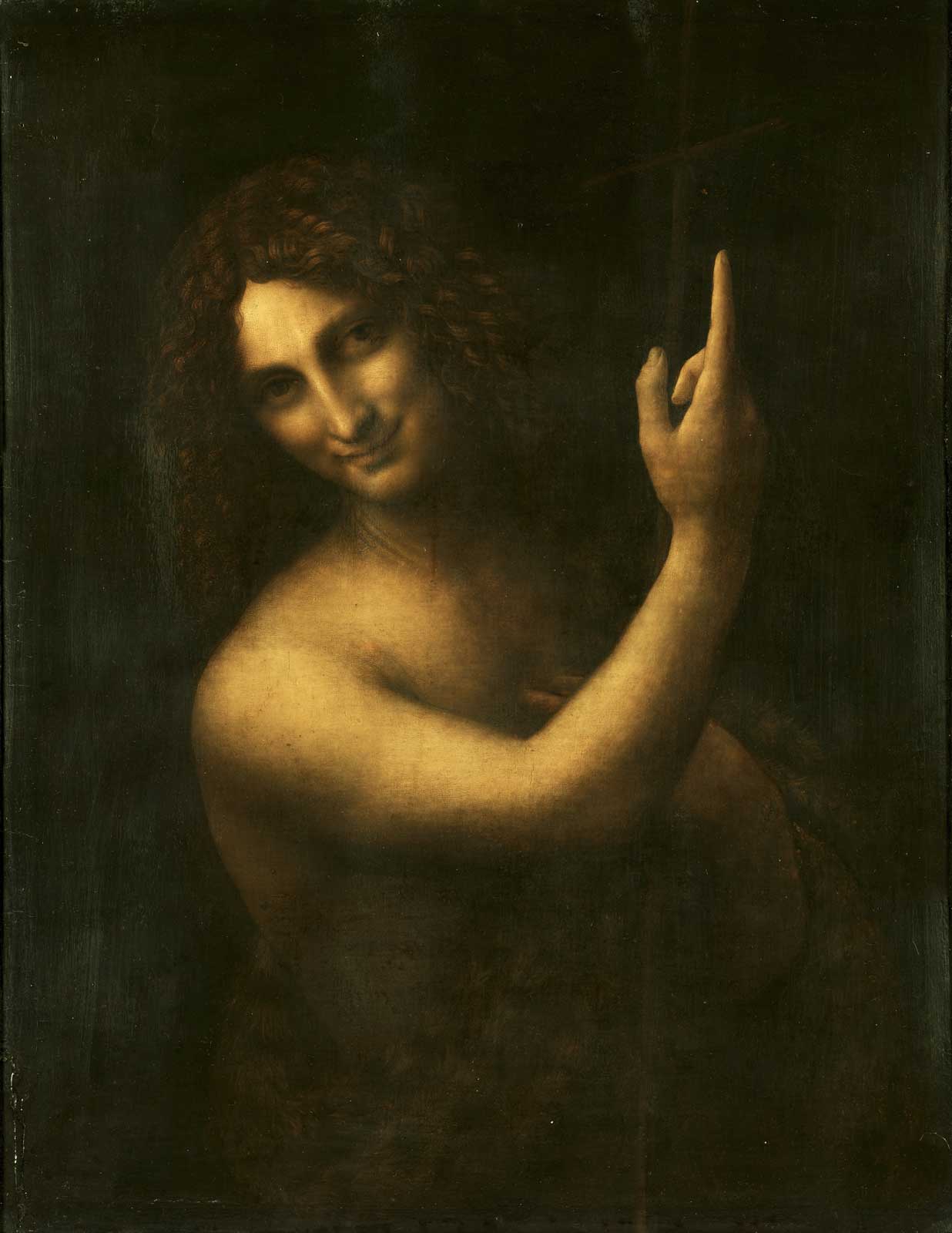 John the Baptist has recognised the Messiah already in his mother’s womb: when pregnant St Mary and St Elisabeth met, the latter said: „As soon as the sound of your greeting reached my ears, the baby in my womb leaped for joy.” (Luke 1:44) 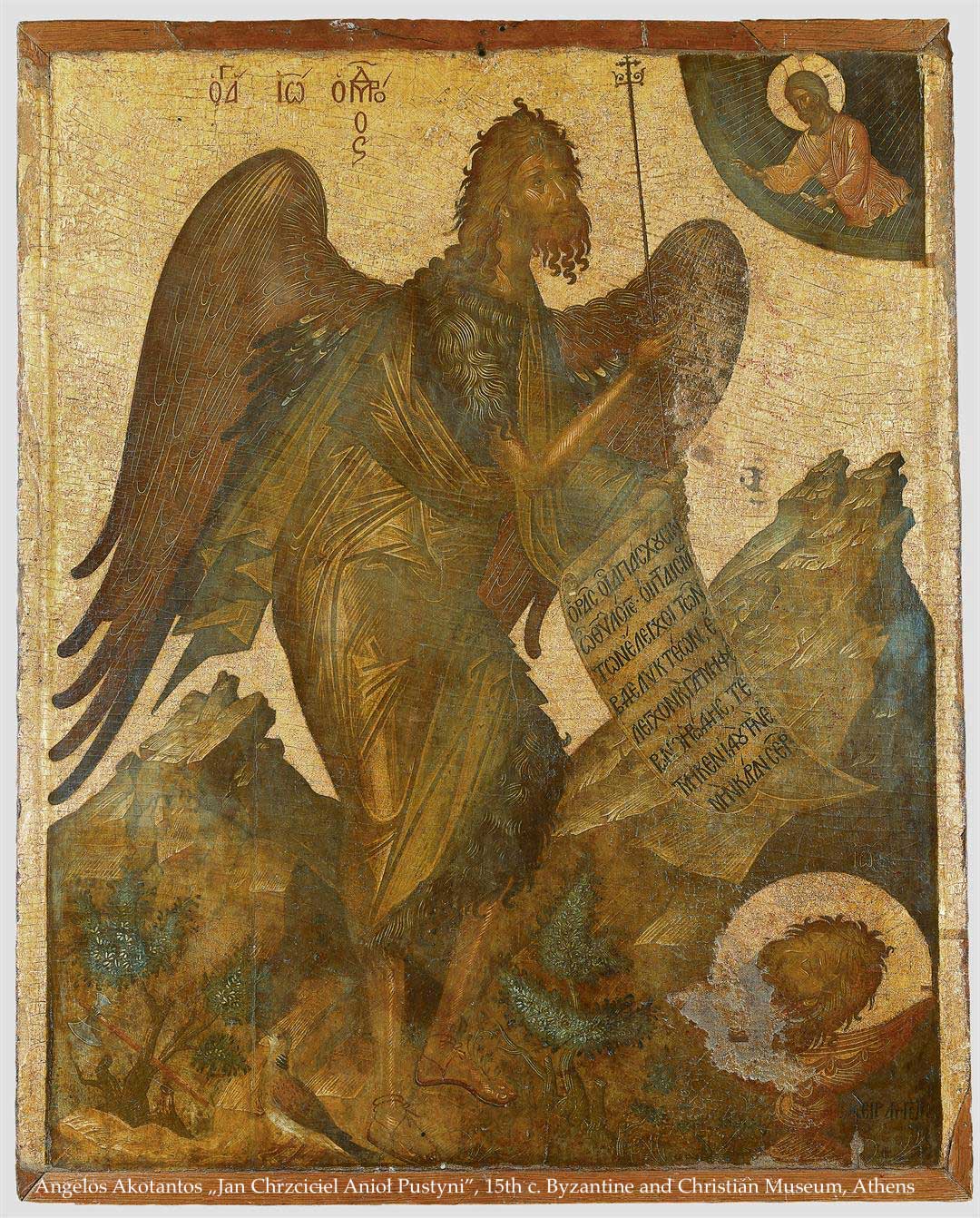 That is, I think, the source for the depiction of “transgender” John the Baptist: the angel is a sexless creature. In the gothic art angels were depicted as delicate creatures, young men with and curly golden hair and no beards.

And finally we may notice another example: this time it is not a man of female features, but a woman that pretended to be a man. I am talking here about St Marina.

Her cult originated in the East (probably in Syria, perhaps in the 5th c.), but was also known in the Western Europe. Marina was the only daughter of a certain man, who decided to become a monk. She went with him and joined the monastery disguised as a boy. When he died, she stayed there as a monk named Marinus. One day some girl living nearby got pregnant by a certain knight, and to cover up her deed she accused young monk Marinus of raping her. Marina accepted the accusation – she’d rather be considered a rapist than reveal her natural gender. She has been expelled from the monastery and just became a beggar; also, according to the Golden Legend, for two years she took care of the baby she allegedly sired. Finally, the monks took pity on her and accepted her back in the monastery. Years later, when Marina died, the monks washed her body before funeral, and only then they discovered that she was a woman. 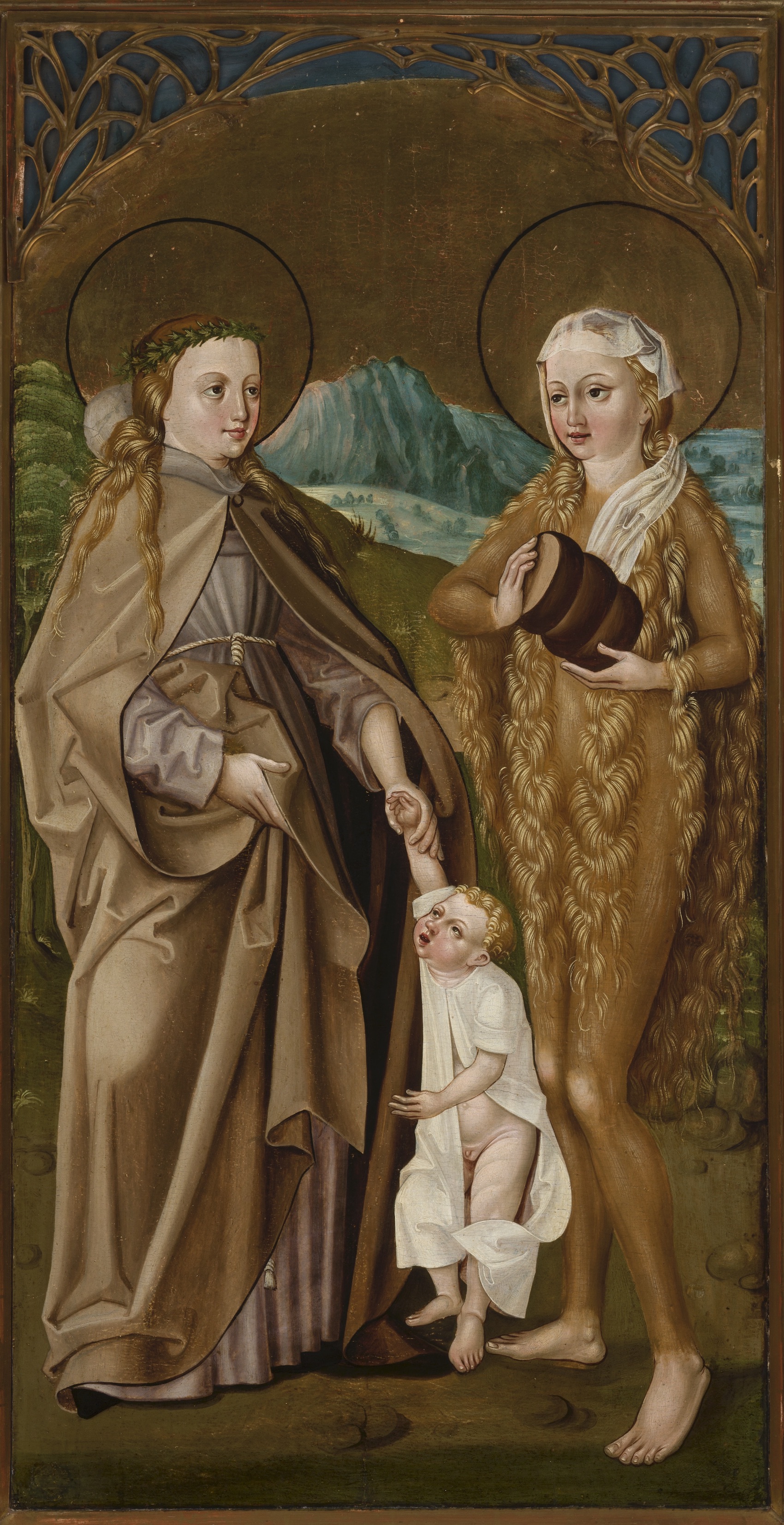 Veneration of St Marina was present also in the Central Europe – her image (in company of St Mary of Egypt) appeared at a retable of St John the Almsgiver from St Catherine church now in Cracow (before 1504, today in the National Museum in Cracow).