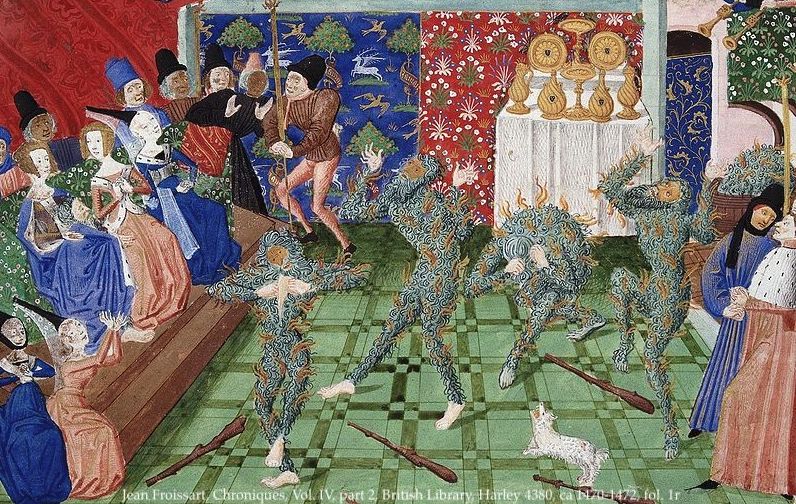 In some late medieval manuscripts of French Chronicles we can find an interesting image: ladies and knights gathered in a chamber, observing dancing Wild Men, who are actually on fire. It is an illustration of an event that is known as “the Ball of the Burning Men” (Bal des Ardents) or “the Ball of the Wild Men” (Bal des Sauvages). It was rather a miserable affair, and the king of France almost lost his life on it. Before I write what it was about, let me stress that this event is a very interesting proof of how characters of Wild Men functioned in the culture of late-medieval courts. 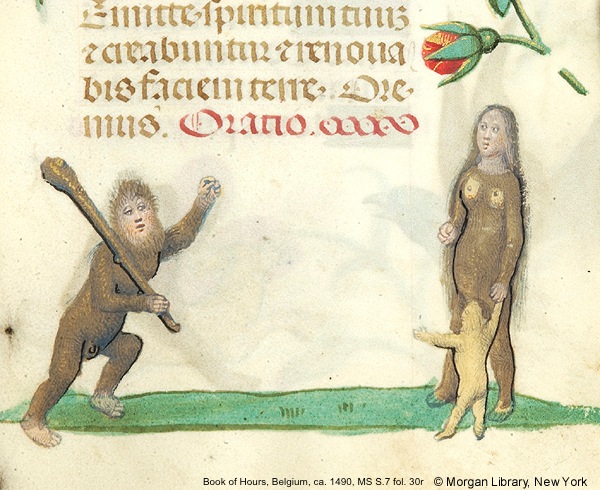 Hirsute people living in woods or mountain caves appeared already in ancient writings: by Herodotus or Pliny the Elder. Later the subject was taken over by Christian writers, such as St Augustine or Isodore of Sevilla, and others. In fact, Christian image of devil as hirsute and with horns and tale derived from ancient depictions of satires: half-human half-animalistic wild characters of unrestrained lust. However, Wild Men appeared in medieval art separately from the depictions of devils. Hirsute people occurred in prints, tapestries, wall paintings, or in the margins of manuscripts. 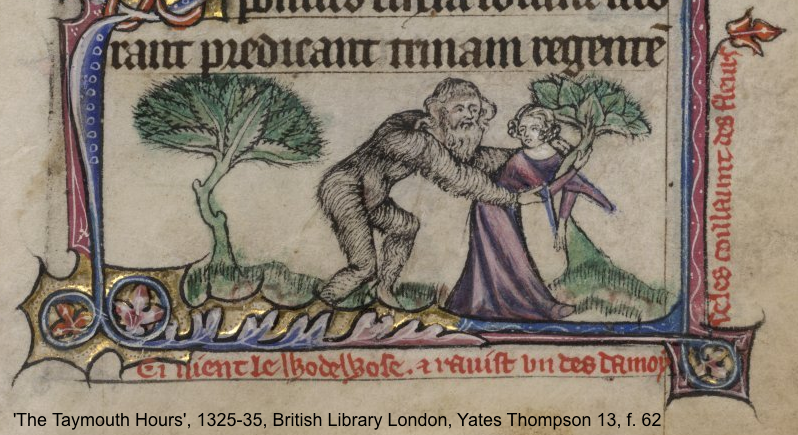 Also chivalric romances included tales of Wild Men: one of the examples is a story of knight Enyas, who rescued a lady abducted by a Wild Man, but unfortunately later the lady chose another, younger knight. The story occurred, among others, in some 14th-century Parisian ivory caskets (I have recently made a video on one of those, with English subtitles, available HERE). 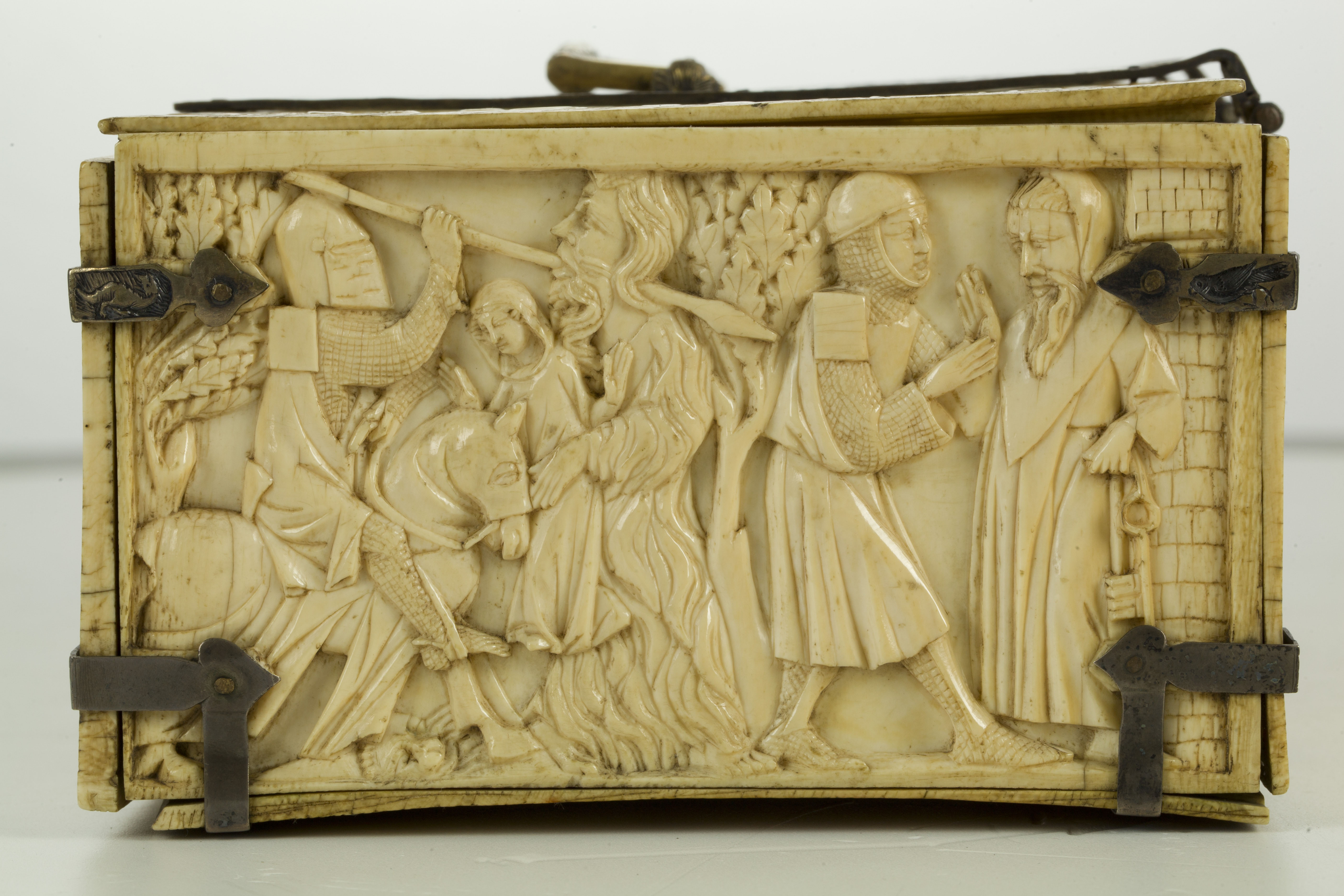 Wild Men in medieval art not only occurred as villains: they could also symbolise original simple life of first men, closeness to nature and vital prowess. There is a theory that popularity of depictions of Wild Men, just as the cult of “wild” hairy saints (Mary Magdalene, Mary of Egypt, Onuphrius) was related to the development of urban culture by the end of the Middle Ages. Idealising the “wildness” and eremitic life in connection with nature may have been the expression of anxieties of urban society at the dawn of Early-Modern era. About hirsute St Mary Magdalene I have previously written HERE and HERE. 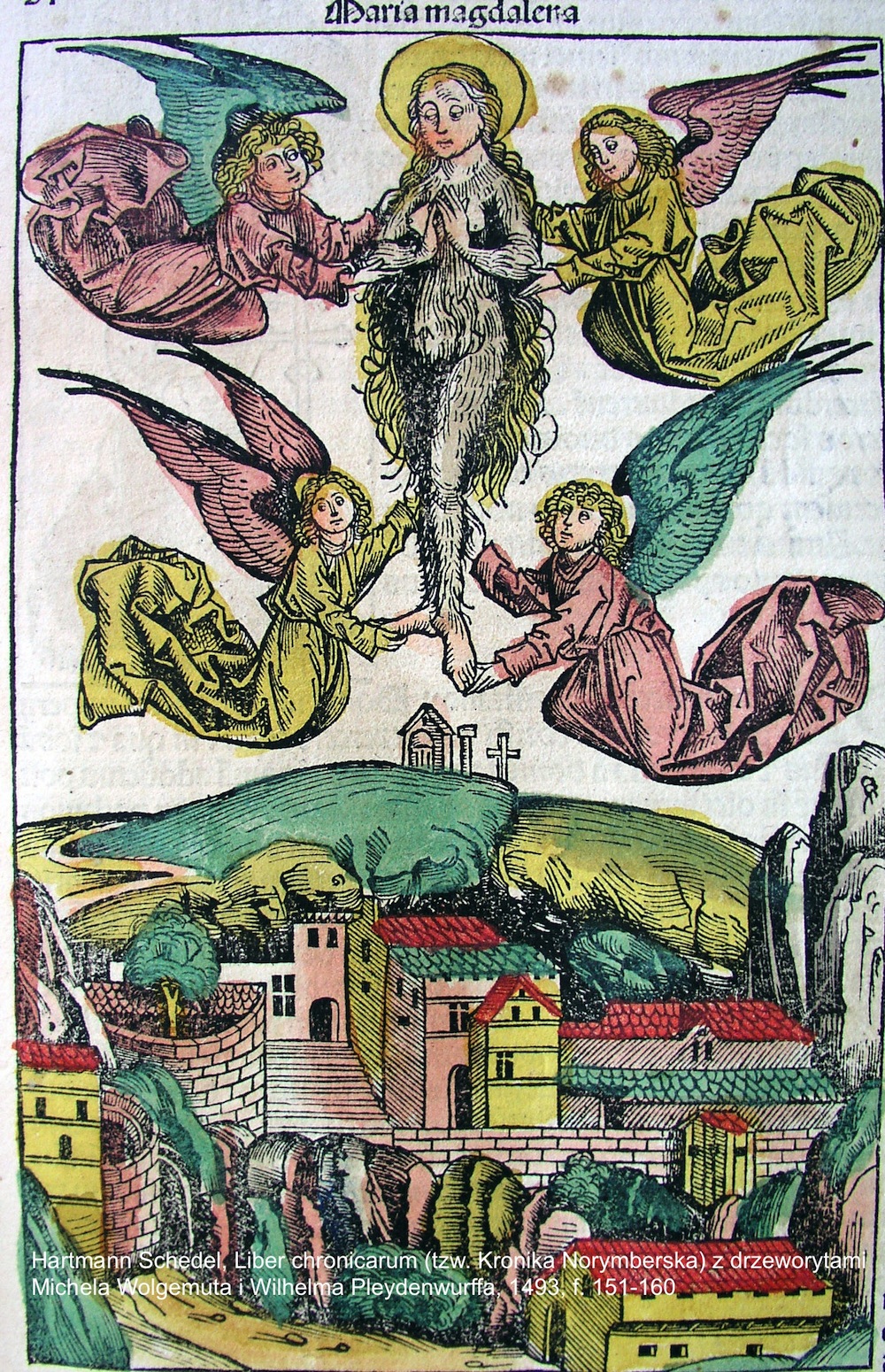 It appears that dancing Wild Men may also have occurred as an entertainment on royal courts. And that’s how we get to the Ball mentioned at the beginning. It took place on January 28th, 1393, in Paris, in a royal residence Hôtel Saint-Pol. The party was actually due to a wedding (and not the first one) of a certain lady-in-waiting of Queen of France. Performing Wild Men were not actors though, but noble men: young counts and king himself: Charles VI called the Mad (he may have suffered from schizophrenia, but that’s a different story). The costumes were made of linen soaked with resin with attached flax, so the participants looked genuinely hirsute. Of course they were aware that such costumes were highly flammable – that’s why it was forbidden to light any candles or torches during the show.

Unfortunately, the rules were ignored by the king’s younger brother, prince Louis of Orleans: he arrived late and drunk, carrying a torch… the costumes of performing young men caught fire immediately.

Of six noble performers only two survived – remaining four died due to burns. One of the survivors, lord of Nantouillet, was clever enough to jump into a barrow of wine (!) and stayed there until the fire was put out. The other lucky man was the king, saved by his aunt, duchess de Berry, who protected him from the fire by dragging him underneath her skirt. Interestingly, such a solution did not occur to king’s wife, Isabel, but that was probably because she fainted. And perhaps the king simply preferred to find himself under the skirt of his aunt? We have to stress here that duchess de Berry was king’s “aunt” only by marriage (she was a wife of king’s uncle, duke the Berry). Also, during that incident the king was 24 years old, while his aunt… did not turn 15 yet. 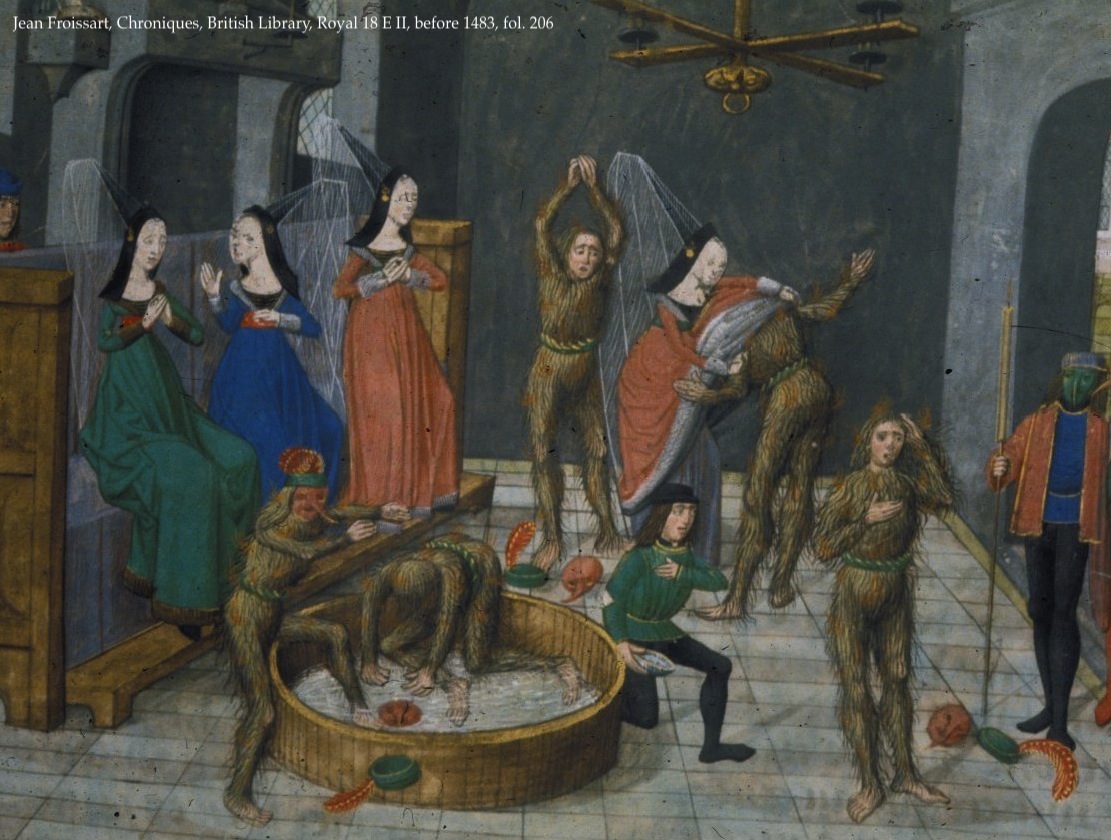 A moral of this story is following: it seems that wine and women do not have to be a man’s doom. Sometimes they may save a man’s life.