Home » Blog » Be careful with your tools
Sat28

Be careful with your tools 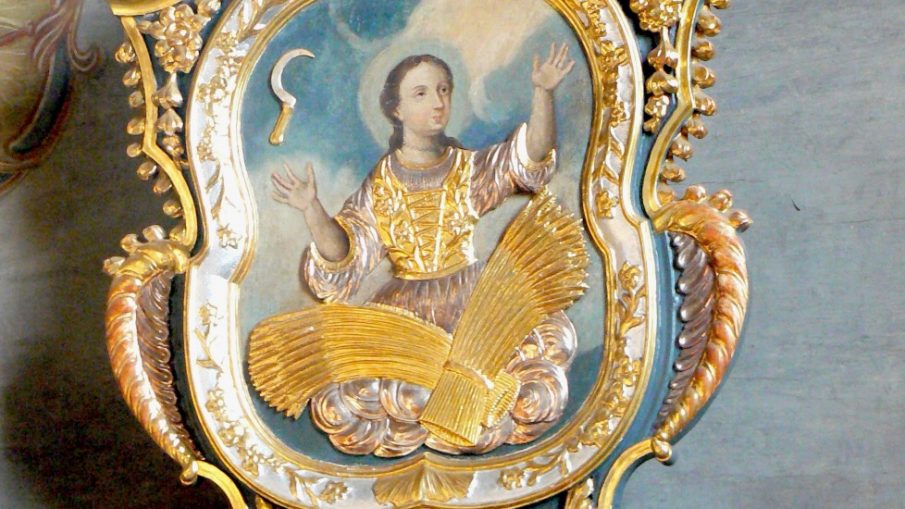 I like old images of less known saints: sometimes it is a real challenge (and lots of fun) to decipher depictions of now forgotten legends. Some saints used to be popular in past centuries (especially regionally) but they are no longer recognisable to nowadays viewers. That is often the case of saints of unpopular names.

That certainly is the case of Saint Wilgefortis, depicted as crucified woman with beard and moustache (I wrote about her some time ago, post is available HERE). But today I would like to write about two other female saints, whose images also occur in Polish art.

First of them is Saint Notburga. She was a girl from Tyrol (Austria), living at the turn of the 13th and 14th centuries. Her cult developed in Early-Modern times: according to her legend, she was a working girl, employed to work during harvest. One day the owner of the field decided that there is too much work and denied Notburga time off when she wanted to go to church for evening prayer. Then Notburga said: let God be the judge if I should continue my work or if I should have a break to go to church. She threw her sickle into the air, and it miraculously remained suspended in the air. Of course after that Notburga was allowed to go to go to church. Interestingly, the depictions of St Notburga with her sickle floating in the air may be found on Early-Modern feretrons (paintings designed to be carried during processions) in Lesser Poland. For example there is one in St Bartolomew wooden church in Mogiła in Cracow (photo above), and another in Church of Birth of Virgin in Inwałd (photo below, from service Sakralne Dziedzictwo Małopolski). 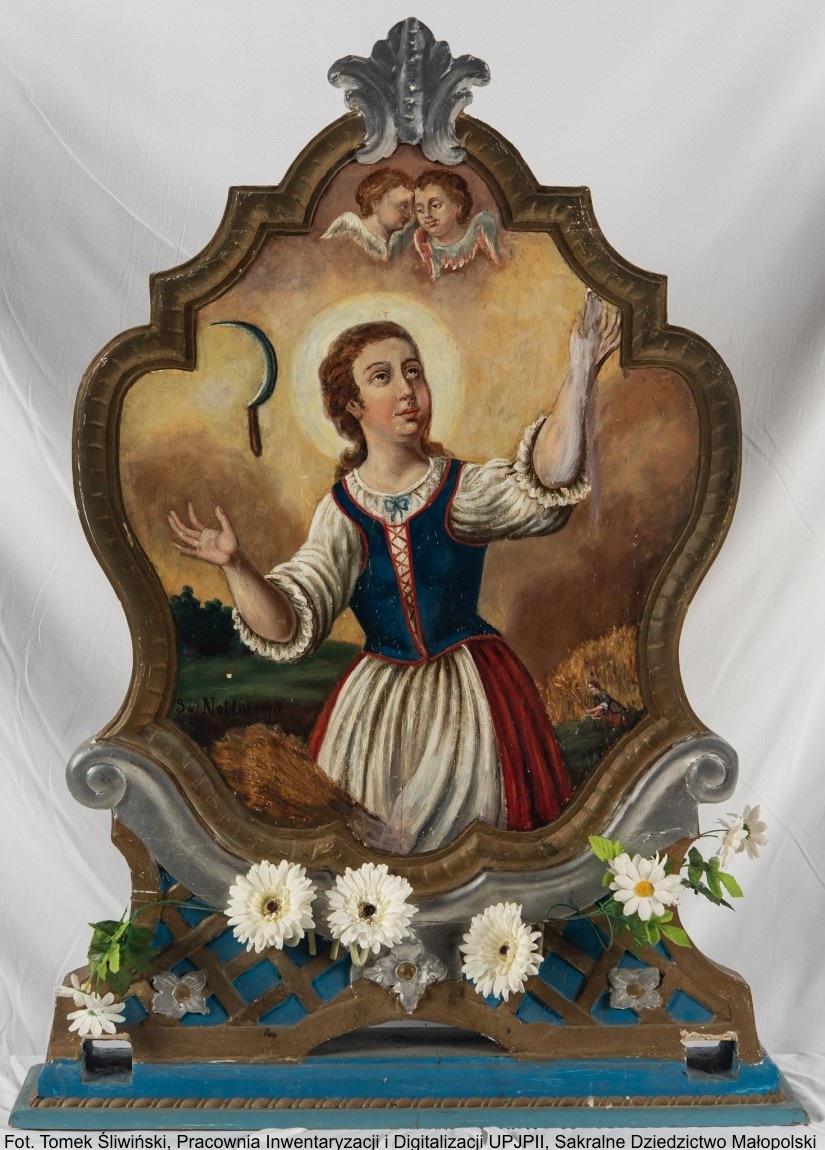 The other saint that I would like to write about is Eupraxia (Euphrasia).

This one may be spotted in two images on the wings of Cracow polyptych of St John the Almsgiver, funded before 1504 by Mikołaj Lanckoroński of Brzezie to his family chapel by the Augustinians Church of St Catherine in Kazimierz by Cracow. The chapel has been demolished in the 2 half of the 17th century, and the surviving elements of the altarpiece ended up in the National Museum in Cracow. Unfortunately, predella of this altarpiece did not survive, and we know that it was adorned with reliquaries in forms of sculpted busts of Saints. This altarpiece contained many relics, including some exotic ones, like pieces of Saint Hilarion, or Sain Pantaleon; Mikołaj Lanckoroński acquired those relics during his trip to Constantinople in 1501; in Buda (Hungary) he also got some pieces of St John the Almsgiver, patriarch of Alexandria. So, he funded altarpiece dedicated to that saint, and its wings were adorned with depictions of various Eastern saints, mainly monks, nuns and eremites. 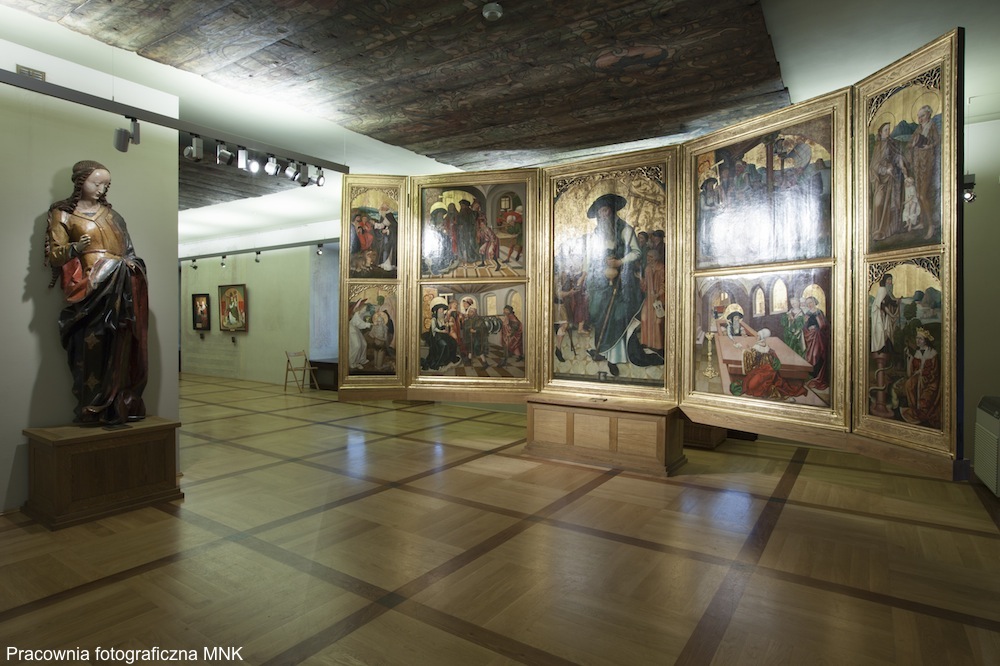 Eupraxia was born in Constantinople in 4th century and she decided to spent her life in monastery. According to her legend, this life turned out to be quite adventurous (or – at least – full of accidents). In Poland in 1520s her legend was known in Polish translation („Żywot, naboszny panny Eufraxyey przez brata Yadama…”, 1524). That source reads that the devil wanted her dead because he hated how good she was. First, he tried to drown her in the well, but when Eupraxia started to scream, other nuns came to her help and pulled her out of that well. Then devil tried again: when Eupraxia was chopping wood, he pushed her axe so she hit her own leg. 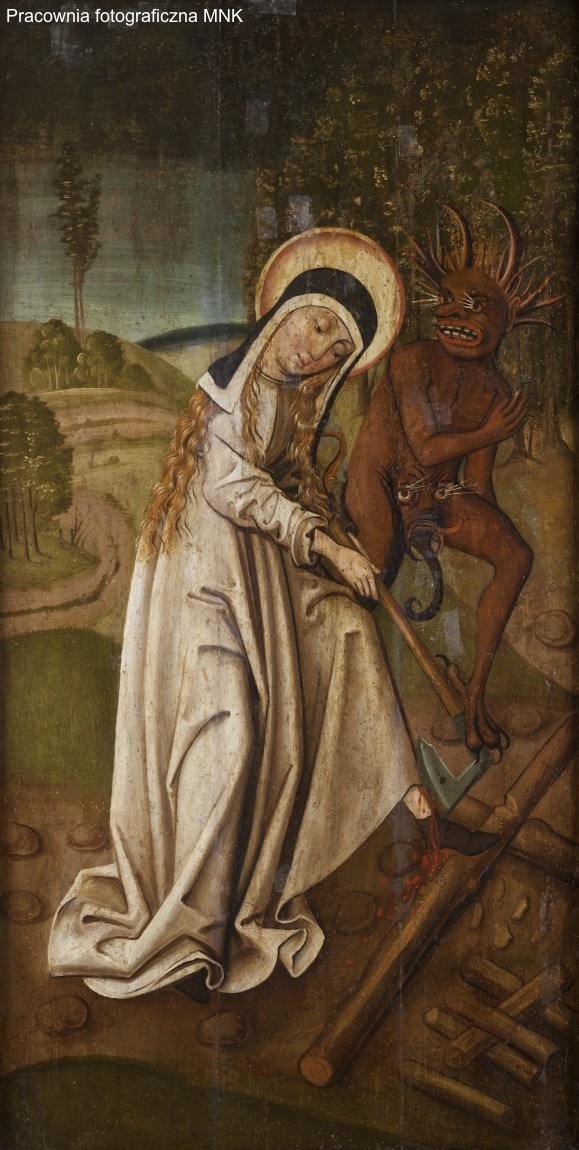 The above-mentioned legend also refers other incidents: one day Eupraxia stepped on the hem of her dress while carrying chopped wood – she collapsed and almost got her eye out (which was also devil’s fault). Also, she fell out of the third floor (pushed by the devil, naturally), and also another time stumbled while carrying a jar of boiling cabbage, which almost burned her face (because devil entangled her legs, of course).

Sometimes I think that both Notburga, throwing her sickle in the air, as well as Eupraxia with all her accidents, should be officially named Patron Saints of OSH programs. 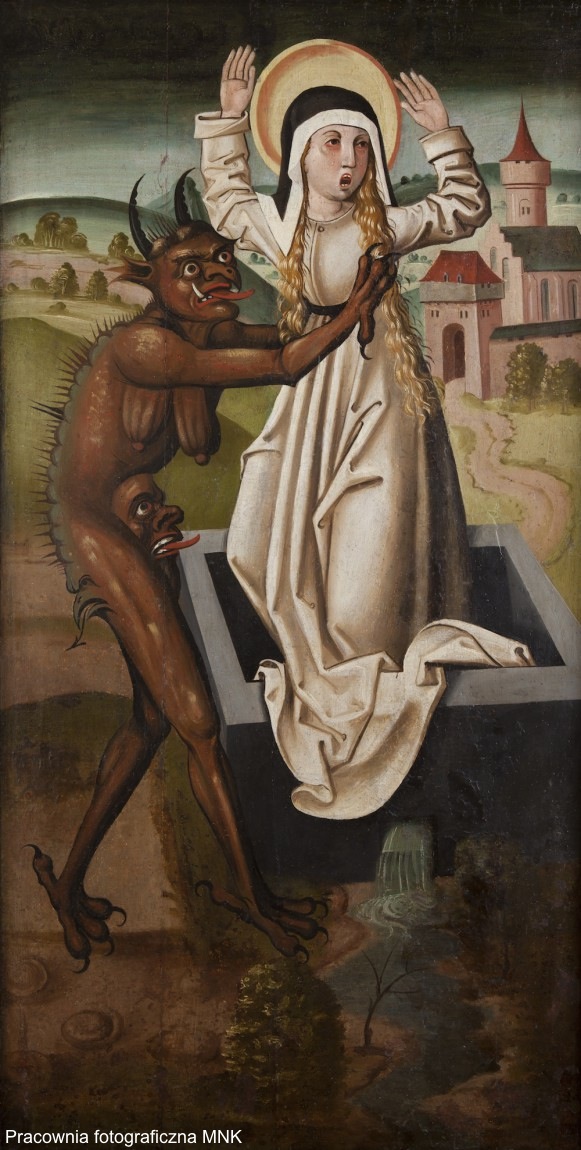