Masculinity of the 16th century 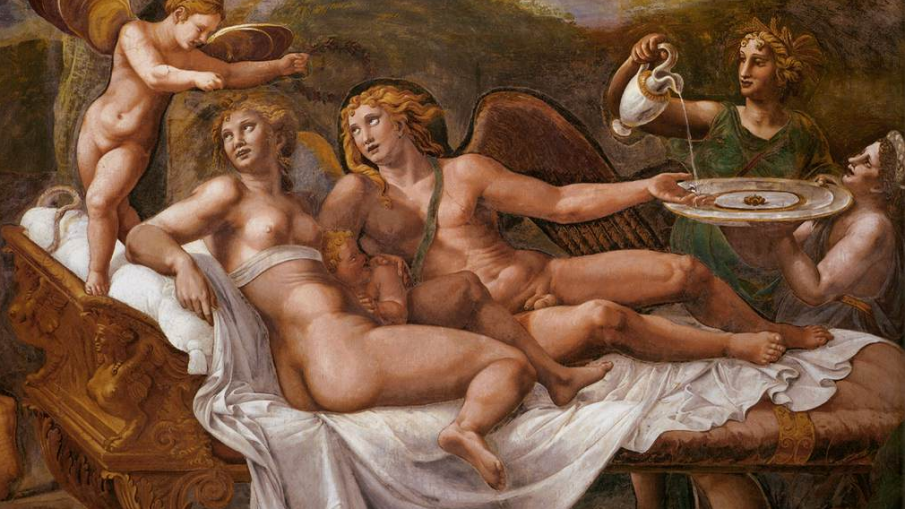 Federico II Gonzaga, the ruler of Mantua, decided one day that he wants to have a nice summer residence, and he commissioned Palazzo del Te, completed in 1525-1534 by an architect and painter Giulio Romano, pupil of Raphael. I have once mentioned Giulio Romano before, in a post on erotic renaissance prints (available HERE), and it must be said that the decorations of Palazzo del Te are also not very modest. That was the spirit of the age: most of the elites back then appreciated carnal pleasures – kings and princes as well as cardinals and popes. Of course, they had to pay the price for that: for example, Federico II Gonzaga did not manage to enjoy his palace for a long time because he died in 1540. He passed away at the age of 40, but did not perish gloriously in a battle; the cause of his death was syphilis. 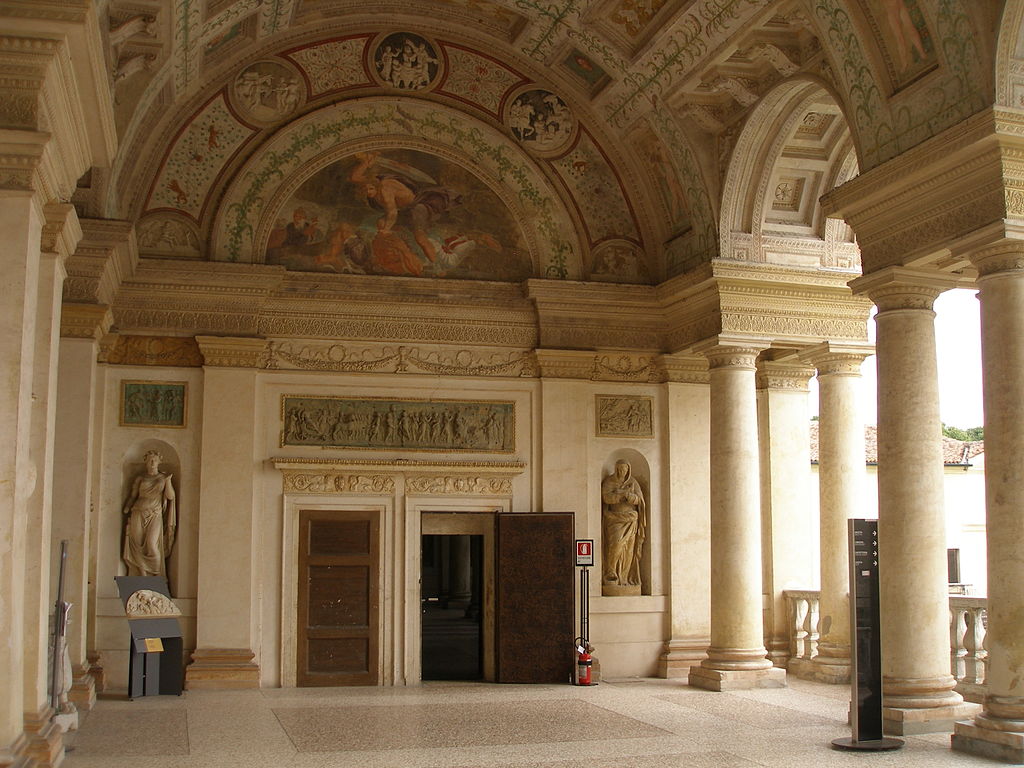 Maria F. Maurer in her PhD thesis ” The Palazzo del Te and the Spaces of Masculinity in Early Modern Italy” (Indiana University 2012) proves that decoration of Palazzo del Te was a display of idealised masculinity; that it was supposed to stress the authority of the Gonzaga prince and present Federico and his heirs as divine rulers, virile lovers and dynamic leaders. Indeed, the mythological scenes decorating walls and ceilings of the chambers in this palace are full of love stories, and their compositions expose nakedness of the heroes. It is particularly visible in case of ceiling frescoes, as we watch the figures in quite a peculiar perspective.

In my opinion, especially intriguing is a composition of a painting in the chamber dedicated to Sun and Moon (Camera del Sole e della Luna): we may see two chariots with gods related to Sun (Apollo) and Moon (Diana), and both figures are seen from below. However, the admirers of female beauty may be disappointed: Diana does not present her carnal attributes. Meanwhile, Apollo does…

I am not entirely sure if that may be read as display of masculinity; and even more strange case is a fragment of the decoration of chamber dedicated to Psyche (Camera di Psiche), depicting river Styx. According to ancient traditions, personification of a river is a bearded man (a god of particular river; according to the Greek mythology, 3000 sons of Thetys and Titan Oceanus were the gods of rivers), leaning over a jug of water representing a spring. However in this case the water does not originate only from the jug, but also comes from the man’s beard and… his penis! Moreover, this god does not seem to impersonate the ideal of male beauty.

A different case is my favourite piece of decoration from the same chamber, that is a depiction of conception of Alexander the Great. According to the legend mentioned by Plutarch, the official father of Alexander, that is king Philip II of Macedon, one day saw a snake in his wife’s bed. His wife was Olympias, princess of Epirus. Philip figured out that perhaps she was cheating on him and went to the oracle in Delphi to find out if his suspicions were correct. The oracle revealed that he actually saw his wife with god Zeus-Ammon (Greek Zeus has been identified with Egyptian Ammon-Ra), and that the god impregnated Olympia, disguised as snake or dragon. That story was supposed to prove that Alexander the Great was half-god. Meanwhile, king Philip received prophecy that he would be punished for peeking on god: he was going to loose his eye. Indeed, in 354 BC and arrow removed Philip’s eye during a siege of Metona.

The depiction of conception of Alexander the Great by Zeus-dragon occurred in medieval manuscripts; my favourite version is a Netherlandish miniature in Les faize d’Alexandre (Quintus Curtius Rufus, translated by Vasco da Lucena, ca. 1468–1475, British Library in London, Burney 169, fol. 14). 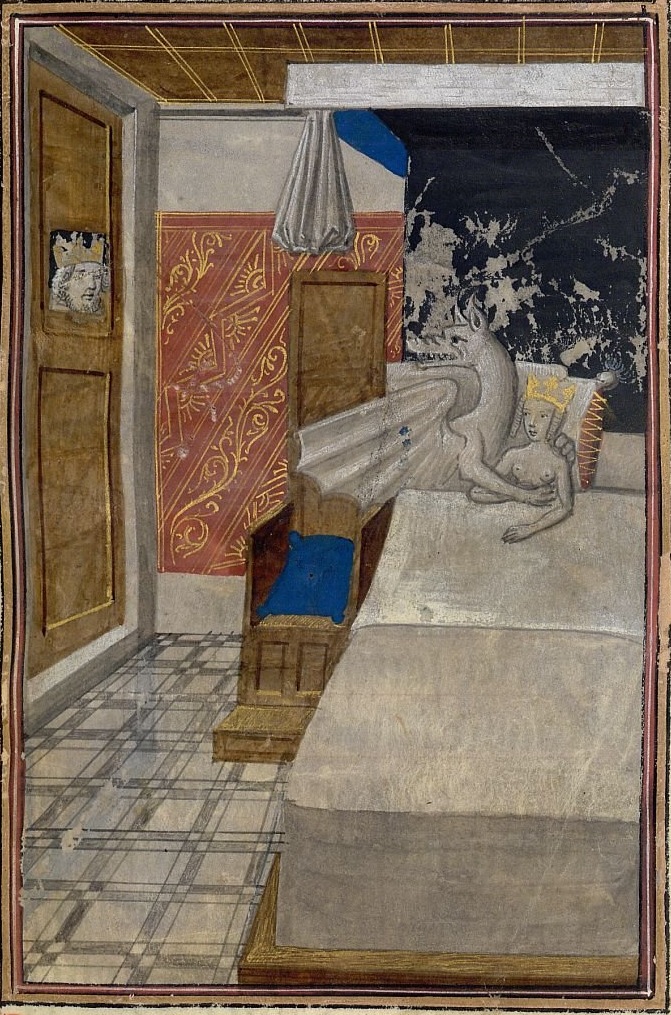 But the depiction in Palazzo del Te is much more graphic: here we see Zeus approaching Olympias, obviously ready to conceive an offspring. In this case it is not exactly an inter-species intercourse (is that how we may call what is in the medieval miniature?), as Zeus turned to dragon only in the part of his legs (Olimpias may even not have noticed that). The rest of Zeus is purely human and undoubtedly attractive. 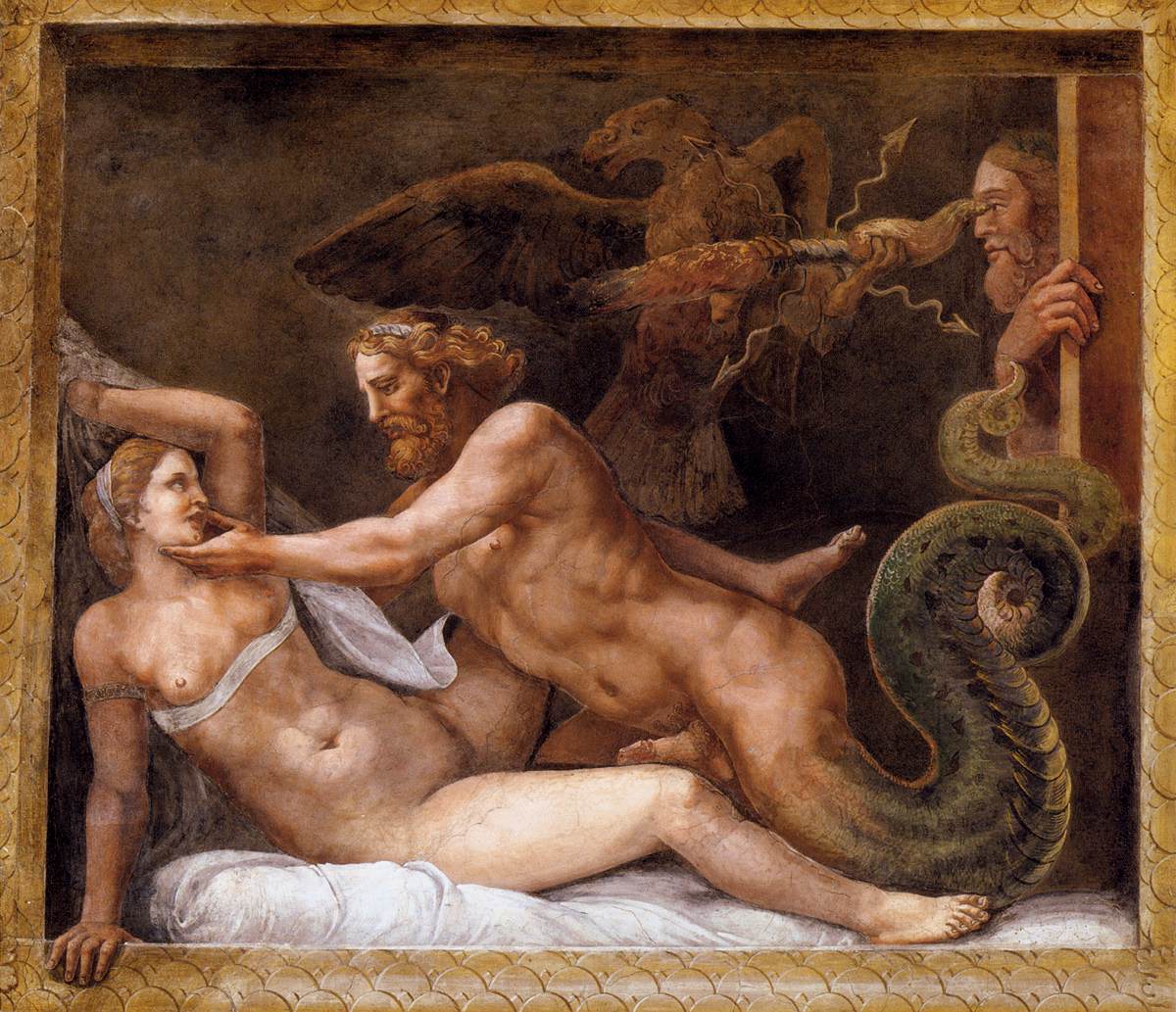 Interestingly, the image contains also the depiction of immediate fulfill of the prophecy about punishment: we may see Philip’s eye being removed by the lightning thrown by the eagle (Zeus’ attribute). I’m not sure if that fresco may be called the “display of masculinity”; it surely provides a conclusion that husband should never spy on his unfaithful wife. Philip raised Alexander as his son anyway – but he had to manage with only one eye.

The PhD thesis I referred to is available in the service academia.edu.