In 2003 a group of wooden churches in Lesser Poland has been inscribed into UNESCO World Heritage List, and among them was also a church of St Michael Archangel in Binarowa. The church in its present form has been built at the turn of the 15th and 16th centuries, and it is decorated with the 17th-century wall paintings. On the pillar supporting matroneum there is an inscription RESTAURATUM A.D. 1.6.4.1., and initials I. K. P. B., so we may assume that the church decoration has been commissioned by the parson of Binarowa church, Jan Kaniowski (lat. Ioannes Kaniowski Plebanus Binaroviensis), and the paintings were completed in May 1643 (under the matroneum there is another inscription that reads COLORIBUS EXORNATUM FOELICITIER: ANNO DOMINI. 1643. MAY. 23). In the church choir there is another inscribed date: 1650 and around that time the side chapel of the Guardian Angels has been added north of the aisle. 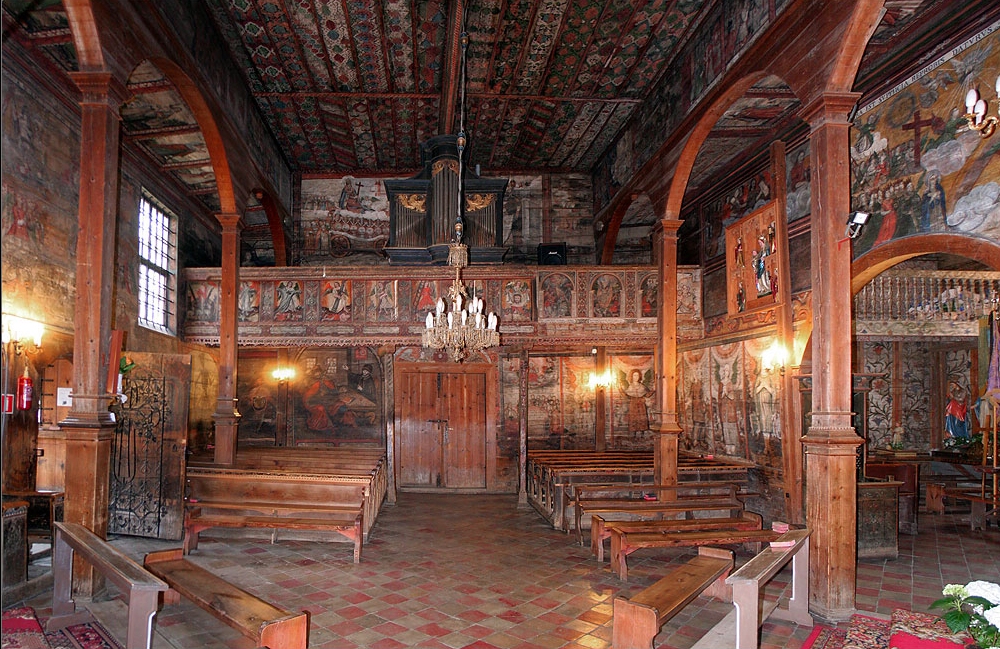 Wall paintings in Binarowa is a subject for more than one post; apparently father Jan Kaniowski was an ambitious parish priest and most likely had access to some good contemporary prints. The paintings present really complex, theologically sophisticated programme, based on printed sources; so far only some of them have been identified and some still await to be discovered. Those prints came from important centres, such as Rome or Antwerp; before the age of photography, the most popular source of artistic inspiration were prints: either original compositions, or reproductions of existing works of art. In the 16th and 17th century many woodcuts or engravings circulated all around Europe and as a result some particular compositions may have been used by local artist of most distant corners of the continent.

Often some complex prints served only as a loose source of inspiration, and the artist decorating church in Binarowa simplified his compositions, using only some elements from the prints. It may be very well observed on the example of a very interesting cycle, depicting Seven Petitions of the Lord’s Prayer. It is all together eight scenes: introductory image followed by seven angels, representing subsequent verses of the prayer Our Father. 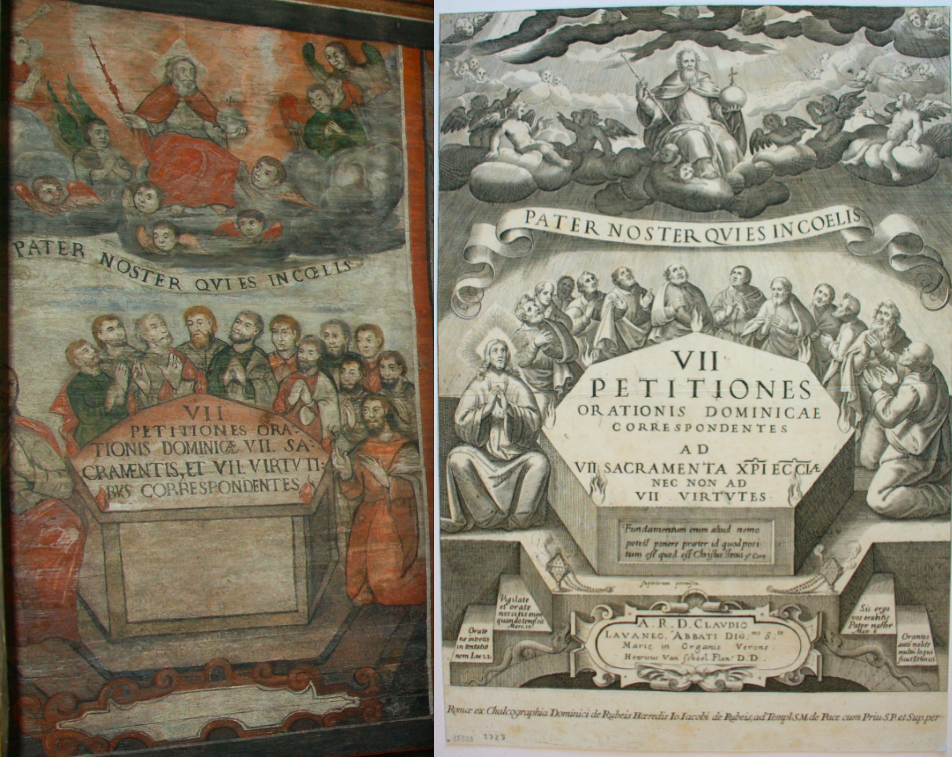 It seems that in this case the painter from Binarowa used the prints by Hendrick van Schoel (died 1622, coming from Antwerp, active in Rome), now in collection of Polish Academy of Arts and Sciences in Cracow. Interestingly, the same cycle has been engraved in 1598 by Matthäus Greuter; at first we may find those prints almost identical (except for minor details, like a chimney): 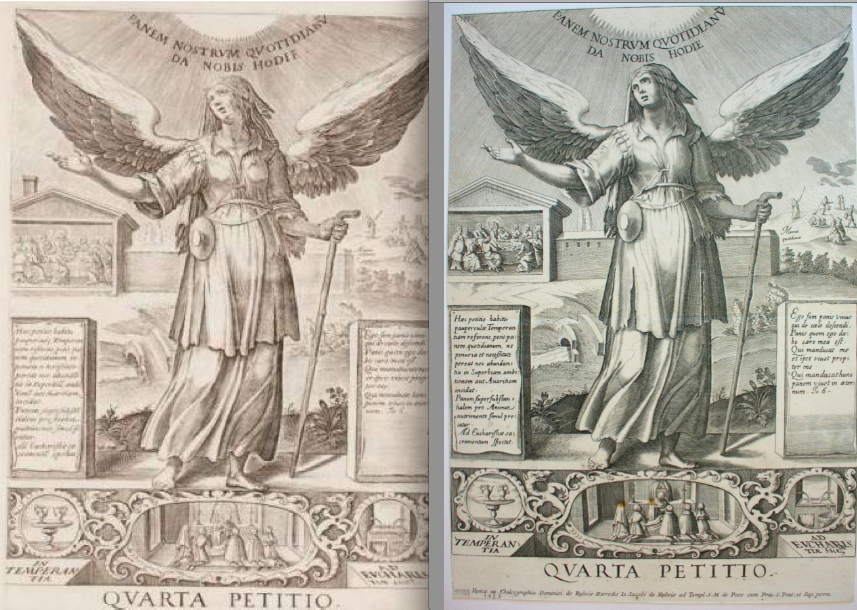 But there is a significant difference in the illustration of a verse ” lead us not into temptation”, as in Greuter’s version the temptation has been illustrated as almost naked woman, while in the print by Schoel (as well as in the painting in Binarowa) she is wearing a dress, although a short one. 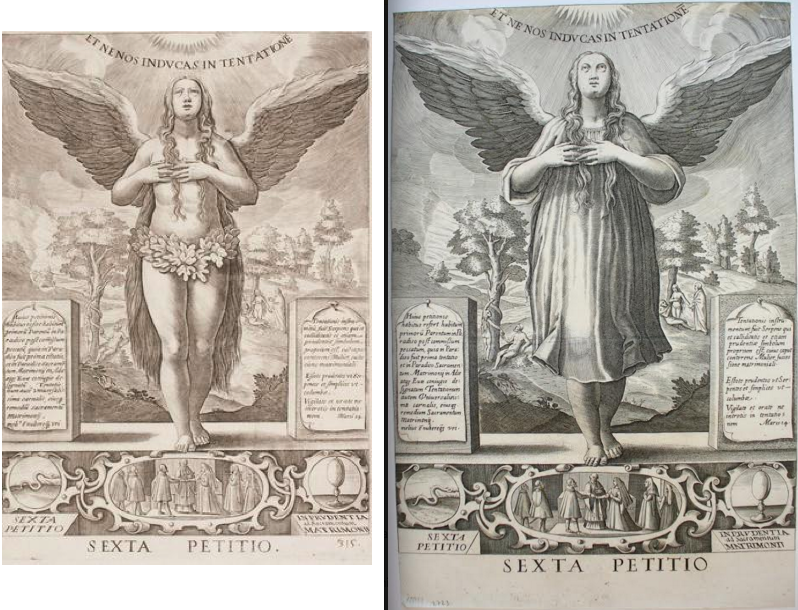 Each verse of the Lord’s Prayer in the paintings in Binarowa has been decorated with background scenes of Biblical events and depictions of Seven Sacraments. And so, “hallowed be Thy name” was connected with Baptism (and the depiction of Baptism of Christ); “Thy Kingdom come” with Confirmation (and depiction of Pentecost), while “Thy will be done on earth as it is in Heaven” has been related to Priesthood. “Give us this day our daily bread” has obviously been connected to the Eucharist, while “and forgive us our trespasses as we forgive those who trespass against us” to Confession. Finally, “lead us not into temptation” has been illustrated with the scene of Original Sin, and a sacrament that prevents falling into temptation: that is Marriage. The last verse, “but deliver us from evil” must have been connected to the Anointing of the sick, but that image has been destroyed when they tore down part of the northern wall of the church to make a passing to the newly built chapel.

The complex programme of the decoration of church in Binarowa has been in my opinion the idea of the parish priest rather than the local artist. Was it father Jan Kaniowski who delivered all the printed source for the images? If so – where did he get them? Those questions still await their answers, but one thing is certain: thanks to the ambitions of the parson, a small village church in Lesser Poland contains one of the most interesting wall paintings of the times of Counter-Reformation. I think I will get back to this subject in future posts.

Photos of the church and my description of it is available at the Digital UNESCO website, soon to be available also in English.