Fake news from 90 years ago? 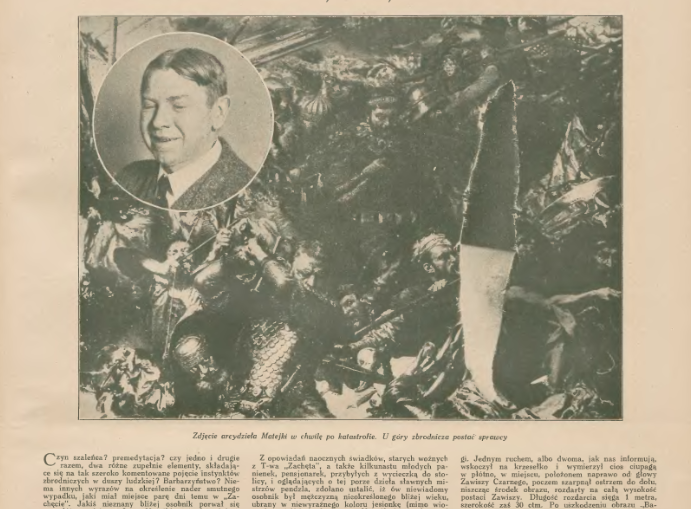 Recently, while I have been preparing my radio programme on “Battle of Grunwald” by Jan Matejko (1878, the National Museum in Warsaw) I came across an interesting information on the painting’s history. That information was given by rather a respectable source, that is a blog of conservators of the National Museum in Warsaw (“Muzeum w białych rękawiczkach”). The post on the history of “Battle of Grunwald” (dated 15.09.2011) briefly informed that in 1928 there was an attack on the painting, performed by an unknown man. The post has been illustrated with a photo from Warsaw Illustrated Weekly (Tygodnik Ilustrowany) of 1928, which presented damage of the canvas and the attacker. 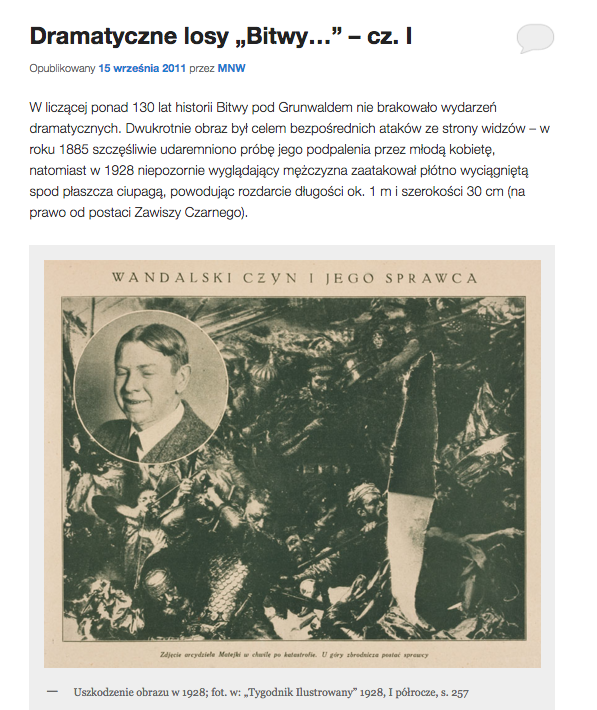 I was intrigued, and I started to dig for more information. Surprisingly, it turned out that none of the sources available for me gave any more information. The account of the attack on the canvas of 1928, along with the reference to the Illustrated Weekly, appeared in the essay by Ewa Micke-Broniarek, “Bitwa pod Grunwaldem – historia i mit”, in a book “Jana Matejki Bitwa pod Grunwaldem: nowe spojrzenia”, edited by Katarzyny Murawskiej-Muthesius, Warsaw 2010, pp. 43-65. This publication has been cited by Jerzy S. Majewski in his article “Bitwa pod Grunwaldem”: Obraz kochany i ukrywany (Gazeta Wyborcza of 15.07.2010). He wrote that Ewa Micke-Broniarek in her study on the painting noted that the press largely ignored this event. The Warsaw journal Illustrated Weekly has only published a short note with the photo of amused attacker. It is easily deductible that this man was insane.

Subsequent Internet publications, such as an article in the respectable service Market and Art (“Rynek i Sztuka”), or a movie published at a channel “History uncensored (“Historia bez cenzury”)  most likely referred only to the post on the National Museum’s blog. They all simply repeat an information that someone has attacked the painting, and they publish the same photo from the journal of 1928. It all seemed very odd to me. 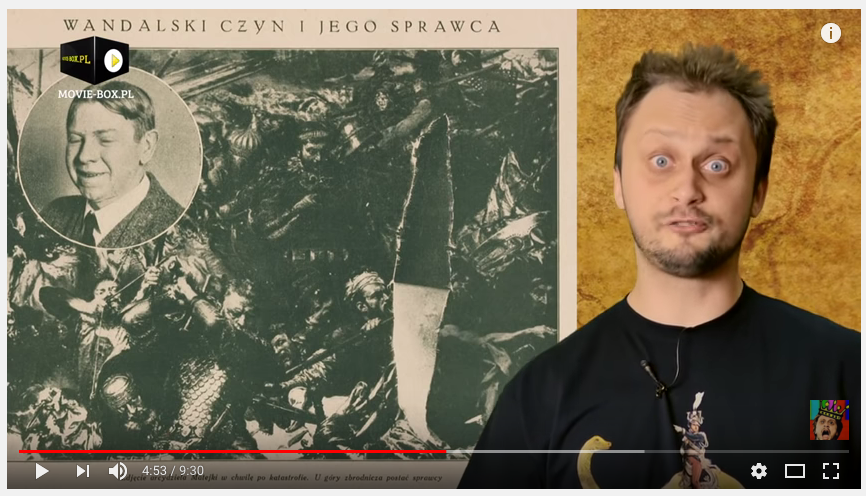 I mean: how could that be? How come someone attacked one of the most famous Polish paintings and only one journal mentioned that event? Why nobody provided any further information: what exactly happened? How this that story end? I would expect that if the attacker’s photo was available, it means that he had been captured. And what exactly did this article say?

A scientist should always get to all of the available sources; luckily, the old journals are often digitalized, ant that is also the case of Illustrated Weekly. It is available on-line. The photo pasted in nowadays sources was only captioned: “first half of the 1928, page 257”, with no reference to the issue number. But it was not difficult to establish what issue that was: the Illustrated Weekly numbered the pages continuously from the beginning of each year, so page 257 is in the issue no 13 of 1928. Under the well-known photo we may find a short note. When I read it, at first I laughed. Then I wondered why it is so strange.

Mad man’s action? Premeditation? Or perhaps both, very different elements, joined in a widely commented idea of criminal instincts of human soul? Barbarianism? There are no words to describe a very sad event that took place couple days ago in the Warsaw gallery “Zachęta”. An unknown individual raised his hand on a canvas by Master Jan Matejko, depicting a famous masterpiece of Polish art, “Union of Lublin”. According to eye-witnesses, the old caretakers of the “Zachęta” Society, and a dozen of young girls who visited the capital and the gallery of famous Polish paintings, it was possible to establish that the unknown individual was a man of uncertain age, dressed in indistinctive overcoat [in Polish commonly called “Autumn coat] (in spite of the fact that it is Spring! – sic!) and the indistinctive rest of the wardrobe. Altogether, he did not look appealing, and if it was not for the axe that he held in both hands, no-one would notice him. With one swift motion, or two, he jumped on a chair and stroked the canvas with his axe, to the right of the depicted Zawisza knight, and then he pulled the blade down, destroying a central part of the painting, ripping it on the entire length of the figure of Zawisza. The damage is 1 meter high and 30 centimetres wide. After the damage of the painting “Batory by Psków” that is a second example of insane barbarity towards a masterpiece by Jan Matejko]

So, the text contains some funny sentences (“the unknown individual was a man of uncertain age”, “Altogether he did not look appealing”), but at first we may assume that this is just an archaic language of the interwar journalism. Anyway, the text still seems to be… too funny! There is a joke on the attacker’s wardrobe (reference to “Autumn coat” worn in the Spring) and, surprisingly, the title of the painting “Battle of Grunwald” is not mentioned even once. The photo presents a detail of the “Battle of Grunwald”, and the event is said to have taken place at Zachęta gallery (where this painting was exhibited back then), but the author claims that it is about another painting by Matejko: “Union of Lublin”. Could the journalist have made such a mistake? I doubt that; especially considering the fact that the “Union of Lublin” was back then in Lviv (purchased in 1877 in Lviv and kept there until 1944). Finally, we must admit that it does not make much sense to call the attacker “unidentified individual”, while having his photograph. By the way that photo shows strangely charming, elegant and smiling guy. And even the ripped canvas looks odd: I am not sure this kind of damage can be made by an axe, and also I have a feeling that the ripped part does not entirely match the hole in the canvas. 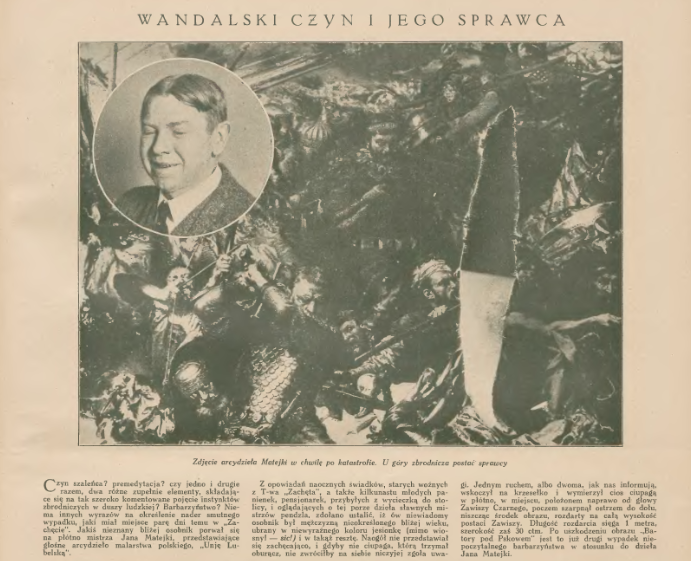 And suddenly I realized why such a strange note may have been published. Apparently no-one noticed that this particular issue of the journal has been published on… April 1st! It simply seems to be a joke on April’s Fools’ Day! 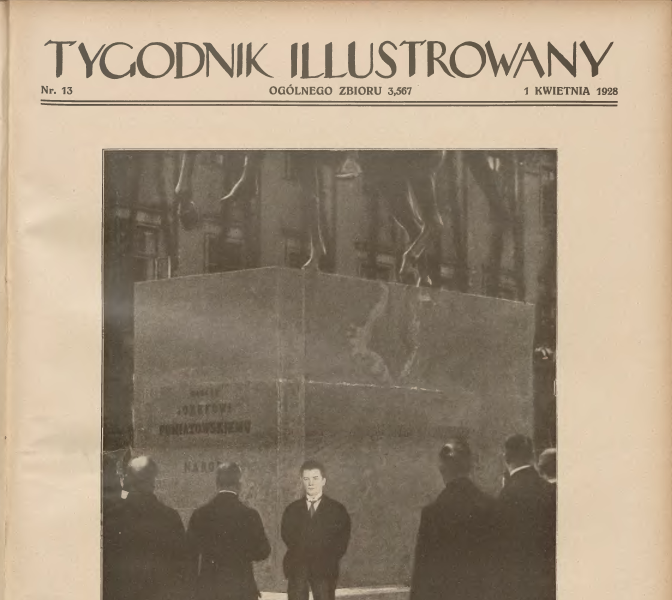 If I am right in this case, then we have to admit that this joke is on us: we’ve got tricked 90 years after it has been published! I wonder if the picture of the attacker here could actually be a portrait of a prankster journalist who wrote that.

After I have published this post, I received a message that I was not the first one to discover the truth about that note after all. The information has been revealed as April Fool’s joke by Karolina Zalewska, during the conference in Nowy Wiśnicz on 28th September 2018. Her paper has been published recently in a post-conference proceedings (K. Zalewska, “Uszkodzenia obrazu „Bitwa pod Grunwaldem” Jana Matejki – prawda i mity” in: “Wizja historyczna w służbie narodu – 140 lat historii obrazu Bitwa Pod Grunwaldem Jana Matejki”, Tarnów-Nowy Wiśnicz 2019, pp. 107-112.)