Spire of Notre Dame in Paris 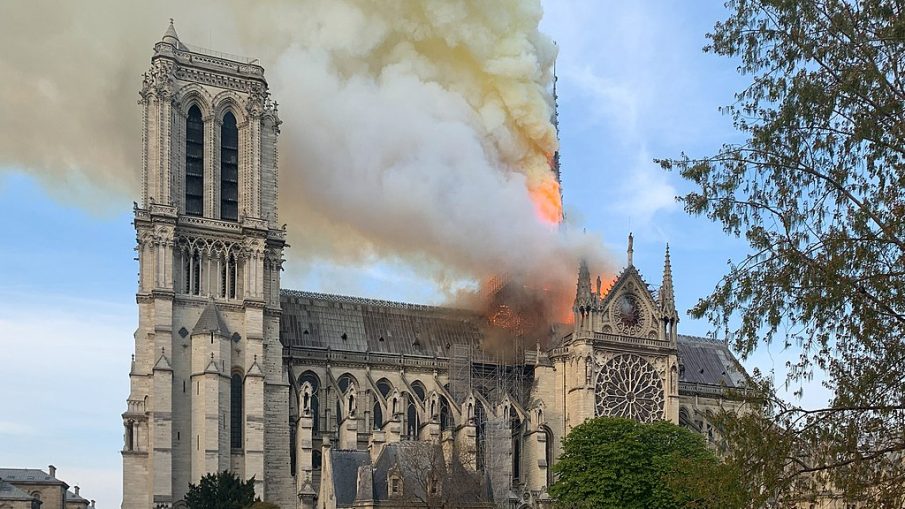 A fire in cathedral Notre Dame in Paris that occurred on April 15th 2019 was a shock to entire World; I have also followed all the news about fight with this fire, and now I wait for detail information on what has been damaged and what survived. What is left of medieval stained glasses (mostly reconstructed in the 19th century anyway), what happened with Early-modern parts of pipe organ and paintings? On the other hand on this occasion it turned out that all most journalists can do is to repeat a very general (or even false) information on this monument. It seemed that it wasn’t entirely clear to them what is actually burning. 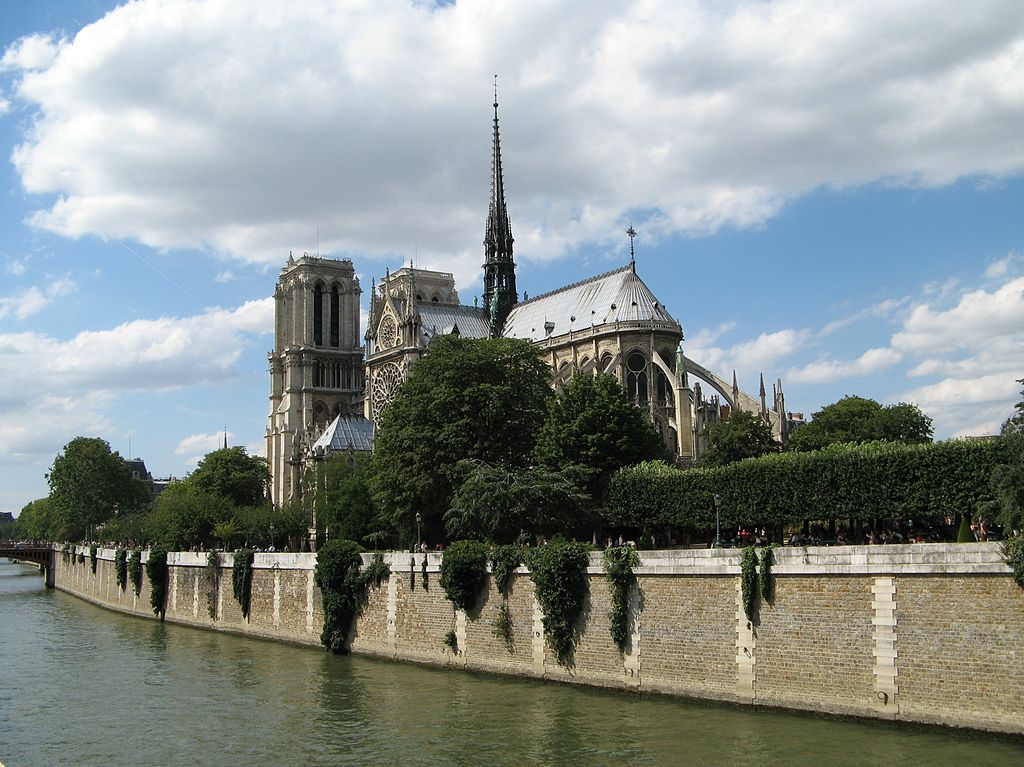 The Notre Dame cathedral in Paris is undoubtedly one of the most precious examples of gothic architecture; however it is not (as we wished) a homogenous monument 8 hundred years old. Apart from the fact that it was created in a long-term process, further centuries brought it quite lots of damage. Medieval furnishing has not survived and the building has been significantly damaged during the French Revolution. Today perhaps many tourist don’t even know when they admire sculptures of Kings at the western facade, they in fact look at the reconstructions. Original medieval sculptures were beheaded during the Revolution – the heads are now exhibited at the Musée de Cluny…

Obviously, the sight of burning turret, which subsequently collapsed, was awful (the media announced that “the spire collapsed”, while in fact the “spire” is just the top of the small bell tower, called turret or flèche). Not many journalists noted though that this small tower actually dated back to the 19th century. And no wonder it burned: its construction was made of wood, not stone.

At the end of the 18th century there was even the idea to demolish Notre Dame completely – mostly because of ideological reasons of Revolution, but also we must remember that by that time the cathedra was in a very poor condition. A medieval flèche, apparently close to collapse, has been deconstructed between 1789 and 1792. It is said that the survived cathedral finally got the needed renovation thanks to the novel “Notre Dame de Paris” by Victor Hugo, published in 1831. Anyway, in 1844 the king Louis Philippe I ordered to start the conservation of the church. For the next quarter of the century the renovation was run by Jean-Baptiste-Antoine Lassus and Eugène Viollet-le-Duc.

There are different opinions on Viollet-le-Duc; some say that we owe him renovation (and survival) of most of the gothic French monuments, while others stress that his idea of “renovation” was somehow closer to “artistic creation”. He was not so much preserving medieval buildings, but rather brought them to the state of “ideal gothicness”, even if it meant adding new elements or altering the original ones. Famous chimeras and gargoyles of Notre Dame are actually the inventions added by Viollet-le-Duc. He also decided to create a new flèche with spire, replacing the lost medieval one. 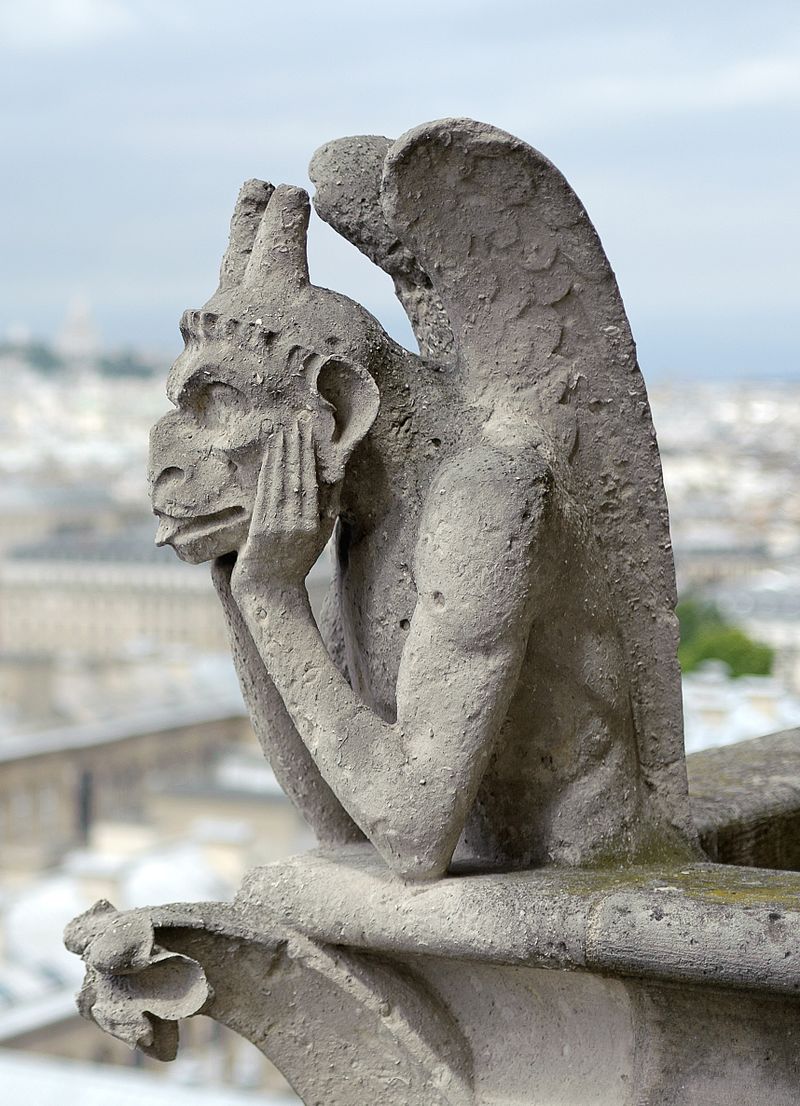 The wooden neo-gothic construction, reaching 93 meters high, has been strengthen with lead and decorated with figures of the 12 Apostles and the symbols of 4 Evangelists. Saint Thomas got the features of Viollet-le-Duc himself. Those statues survived the fire because they were taken to the conservation before the tragedy. On the top of the spire there was a reliquary containing tiny pieces of the Christ’s Crown of Thorns, St. Denis and St. Genevieve. I heard they were supposed to protect the roof from the thunder – but this time it was not the thunder that started the fire. 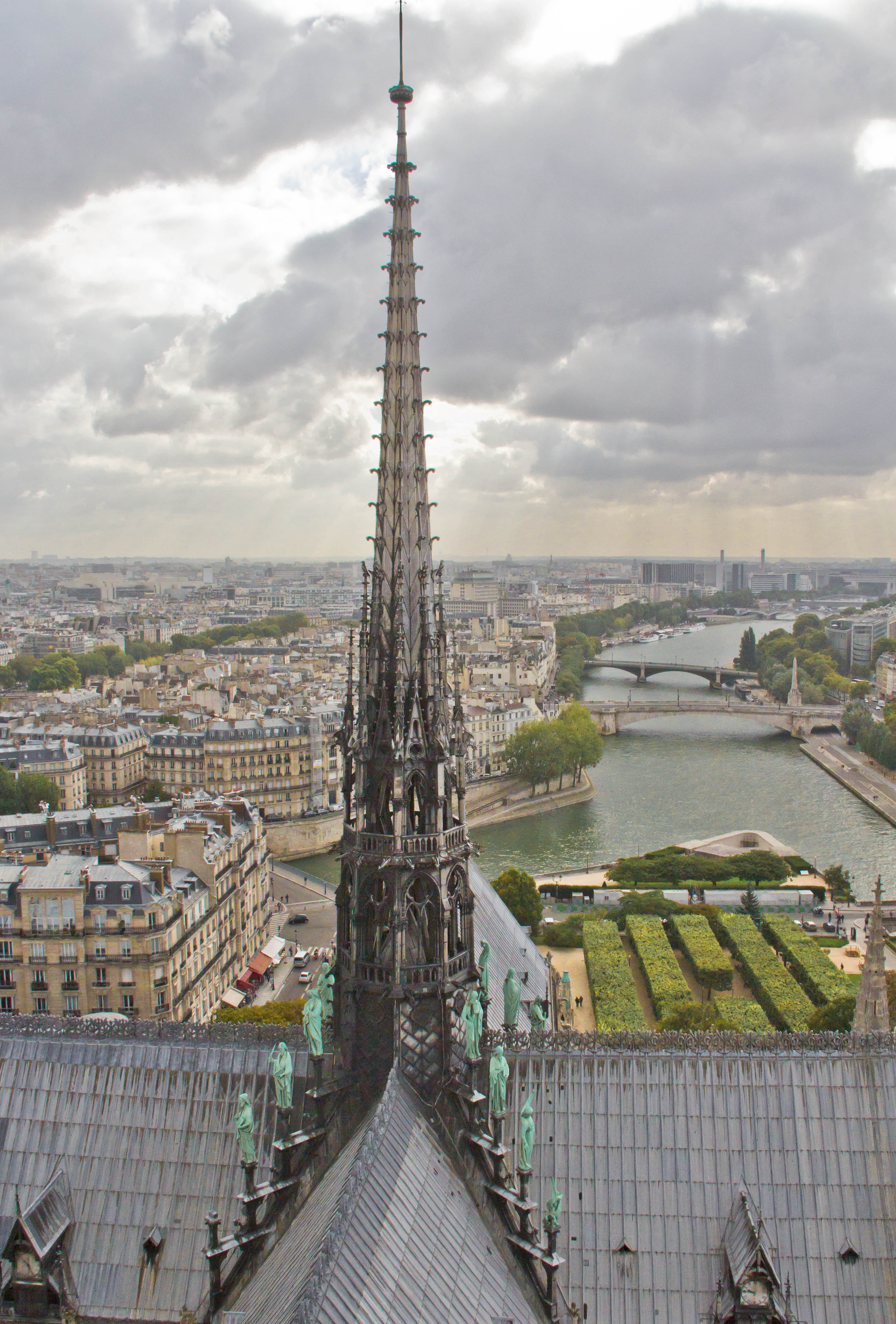 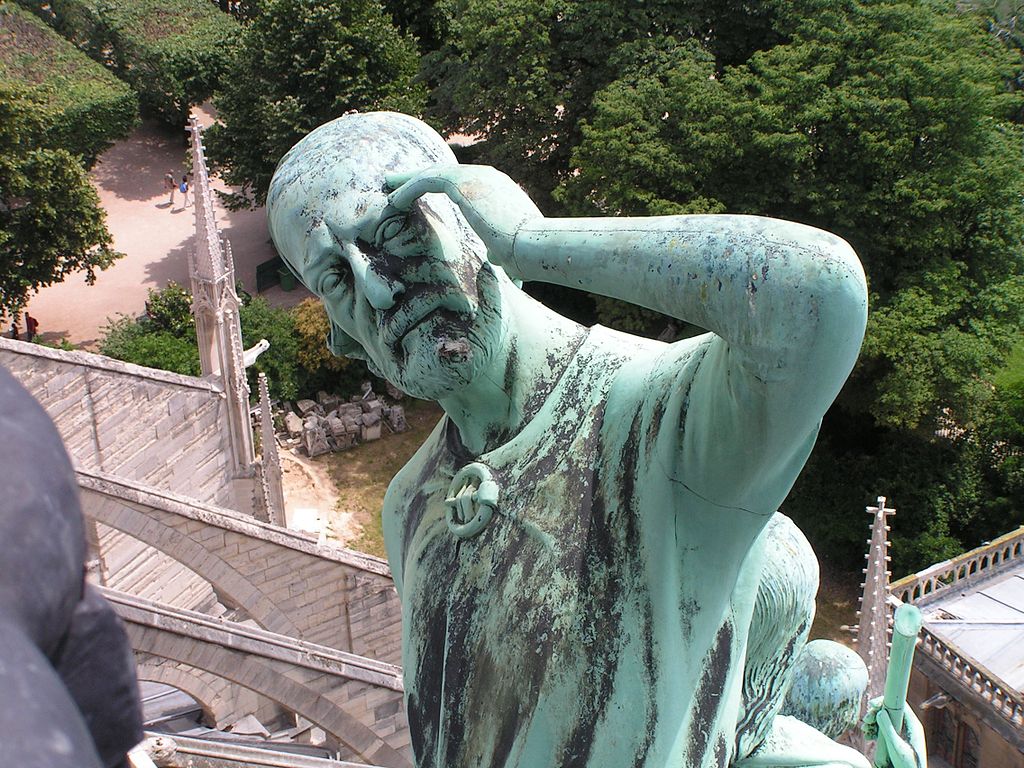 The fires have been considered by the medieval builders as possible events and I have a feeling that back then they really knew how to build to minimise the potential damage. In case of Norte Dame in Paris the woodden construction of the roof burned down (not the “woodden interior”, as some media wrote, and certainly not “wooden vault”) as well as the wooden 19th century flèche, but most of the stone vault remained intact. Which, of course, is not only thanks to the medieval builders, but mostly thanks to the nowadays firemen.

And by the way, it is worth noticing that in the Middle Ages people believed that the fire of a church may mean that God is expecting a new building, created in new forms. The 12th century cathedral in Chartres burned down in the same century (in 1194) and it has been rebuild in new gothic forms, as they assumed that Virgin Mary (patron Saint of that cathedral) apparently did not like its previous appearance. New gothic style also quickly spread from France to England, which was also due to a fire: in 1174 the cathedral in Canterbury burned down, and it was just rebuilt after a previous fire from just couple of years earlier. Between those two fires the cathedral in Canterbury got the new saint, as bishop Thomas Becket was murdered here in 1170 and canonised very soon, in 1173. So everyone assumed that St Tomas did not like the cathedral of the early 1170s; therefore they have hired a French architect, William of Sens, to create a new one.

Those examples should not be compared, of course, to the latest fire of Paris Notre Dame; if Virgin Mary detested its gothic and neo-gothic forms, she would surely let it burn a long time ago. If we are to consider this situation as a “sign” at all, it was rather a sign that in case of such monuments we should invest in better protection against the fire. Or we should pay more attention to train the construction workers – if the rumor that they were the ones to accidently start the fire turns out to be true. 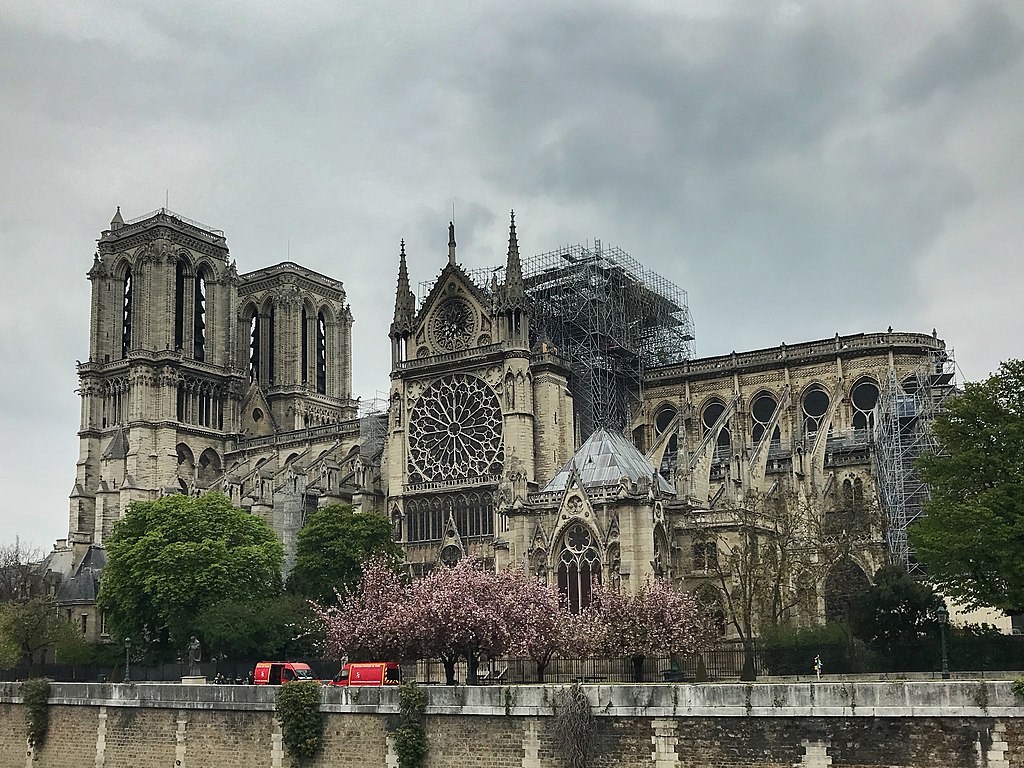