“…with the moon under her feet” 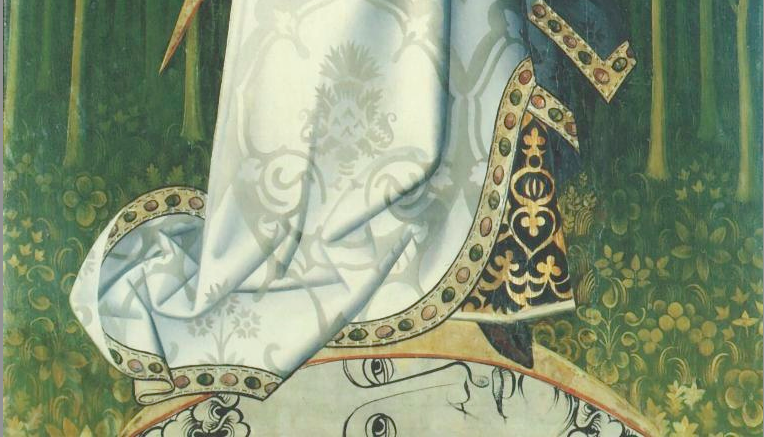 In my last post I have published a drawing depicting Bishop Zbigniew Oleśnicki venerating Madonna with Child (post is available HERE) and perhaps some of you noticed a small detail: apparently Virgin has a crescent Moon under her feet! That motif was very popular in late-medieval art and also later, in the time of counter-reformation. However, for many nowadays’ viewers this detail is not understandable anymore. 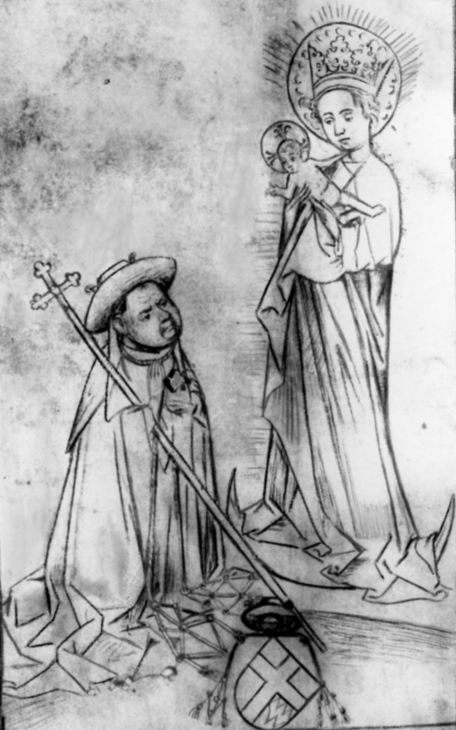 This kind of composition refers to the Immaculate Conception. I often ask people during museum lessons: do you know what the “Immaculate Conception of the Virgin” is about? Interestingly, it seems that only elder people (e.g. students of Third Age Universities) know the correct answer, while the younger generation has no idea. Students usually get confused, they stay silent and finally someone says: “well, it is about her being a mother and a virgin…”, or “because she became pregnant and that was because of the Holy Spirit…” Well, apparently the nowadays’ students lack basic theological knowledge. And then they are very surprised when I reply: “it is not about how Jesus was conceived, but it refers to the conception of Mary herself!” 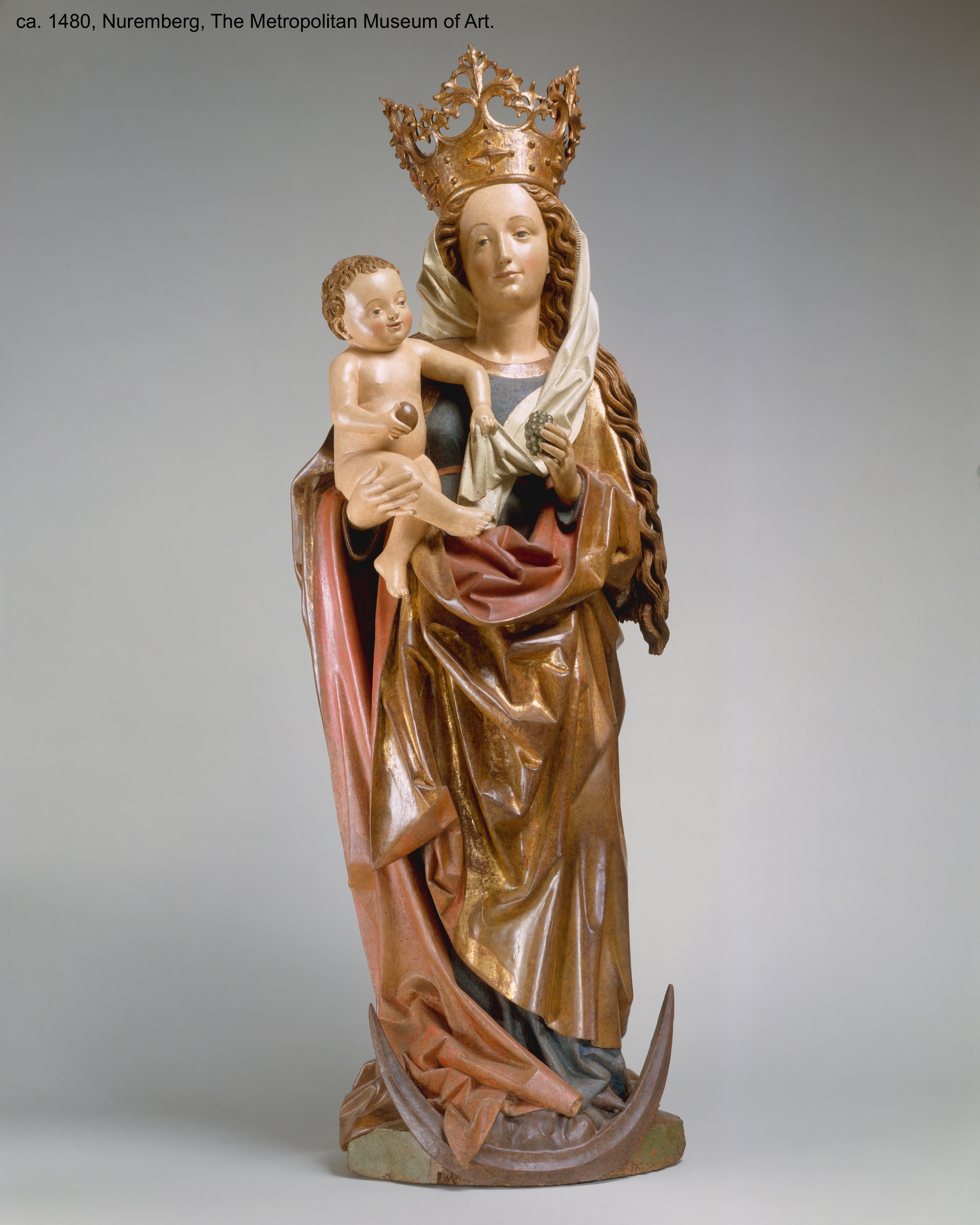 To make a long story short: it is all about the idea that Mary was free from the original sin since she was conceived by her parents. And it does not reflect the way she was conceived, because her parents did that in a traditional way. It refers to the concept that Mary was chosen by God to be Mother of Messiah and ss a result of that she was the first human being since Adam and Eve who did not inherit the original sin. That was because the body of Christ was created entirely from Mary’s flesh, and Messiah was free from any sin, so he had to derive from sinless body too.

The idea of Immaculate Conception has not been widely accepted by the Church at first. Many theologians rejected it (and it somehow reflected the competition between orders, for example the Franciscans were pro and the Dominicans were against it). But later the cult of Immaculate Conception has been accepted by the Council of Basel (on November 17th 1439) and by the papal constitutions of 1476 and 1480. However, it is worth pointing out that the dogma has been announced as late as 8th December 1854! 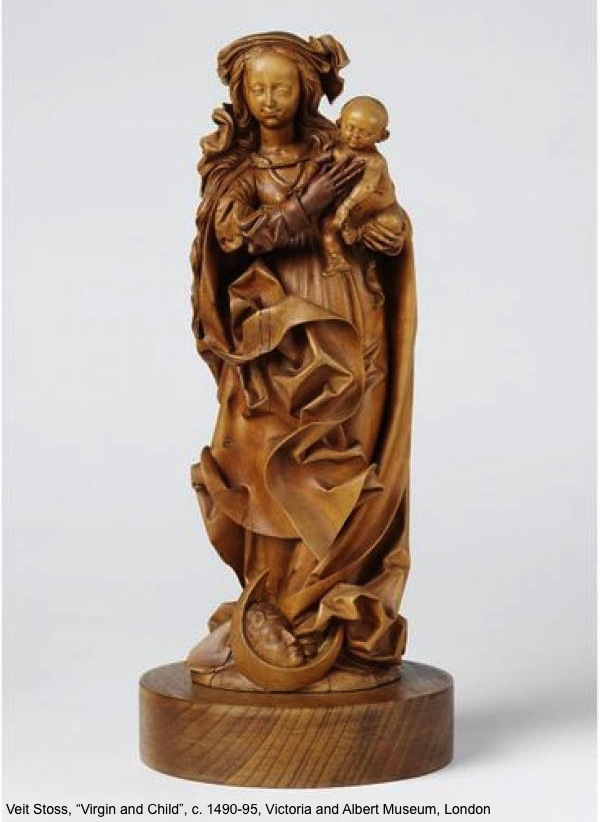 So now let’s finally explain what the Moon has got to do with the Immaculate Conception. I have once read the explanation that Mary, being sinless, was depicted over the Moon, while the rest of sinful people keep living under the Moon. But in fact it is about something else: it refers to St John’s Apocalyptic vision: “A great sign appeared in heaven: a woman clothed with the sun, with the moon under her feet and a crown of twelve stars on her head.” (Revelation 12,1). 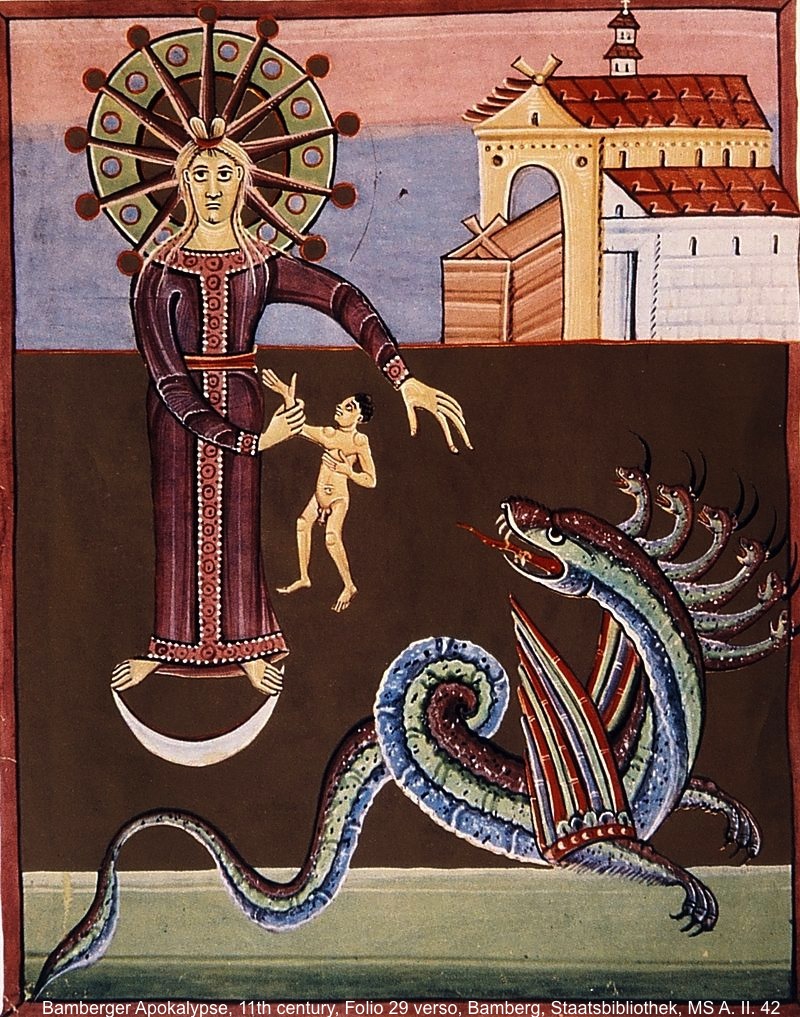 The Woman of the Apocalypse was chosen by God and so theologians interpreted her as a figure of Mary, chosen to be the Mother of Messiah. That perfectly corresponds with the idea of Immaculate Conception. Mary as the Woman of the Apocalypse has often been depicted in art not only with crescent Moon under her feet, but also decorated with stars and surrounded by sunshine. Sometimes she also has an Apocalyptic dragon under her feet.

And finally let’s focus on one more detail: the Moon under the Virgin’s feet often has a face! That is so called lunar mask and it is rooted in ancient traditions. In the ancient art both the Moon and the Sun had faces, depicting their ancient gods: Luna and Sol. That was later adapted by medieval art. 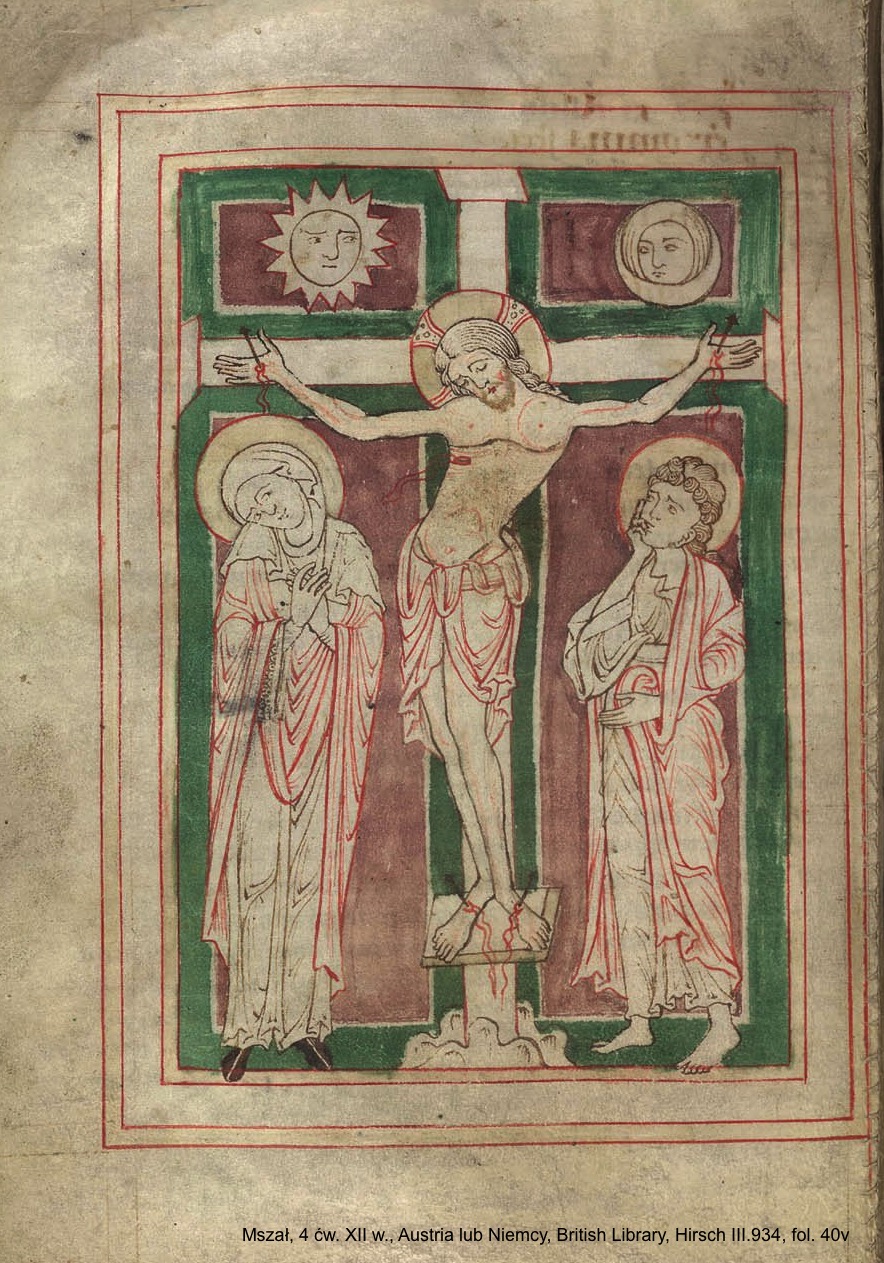 It is also worth noticing that the Moon placed under Mary’s feet corresponds with the traditional idea of ascribing the Sun and the Moon to different sexes. Ancient god of the Sun, Sol, was male, while the goddess of the Moon, Luna, was female. So the Christians linked the Sun to Christ (I have written about that earlier, the post is available HERE) while the “female” Moon was connected to Mary. This is also rooted in a very traditional way of describing the sexes: the Sun is constant (it shines every day) and it is related to the daylight; the day is time of activity and rational thinking. Those aspects have always been understood as “male”. Meanwhile, the Moon is variable (its phases have often been considered as related to female hormonal cycle) and most of all it is related to the night, which is a time of rest and also a time when emotions outweigh rational thinking. The Moon was believed to unleash human desires and even madness.

Variability, passivity, being irrational and emotional, plus uncontrolled libido: there are the characteristics that have been culturally ascribed to womenhood. Even the Virgin Mary, however sinless, was still a woman. 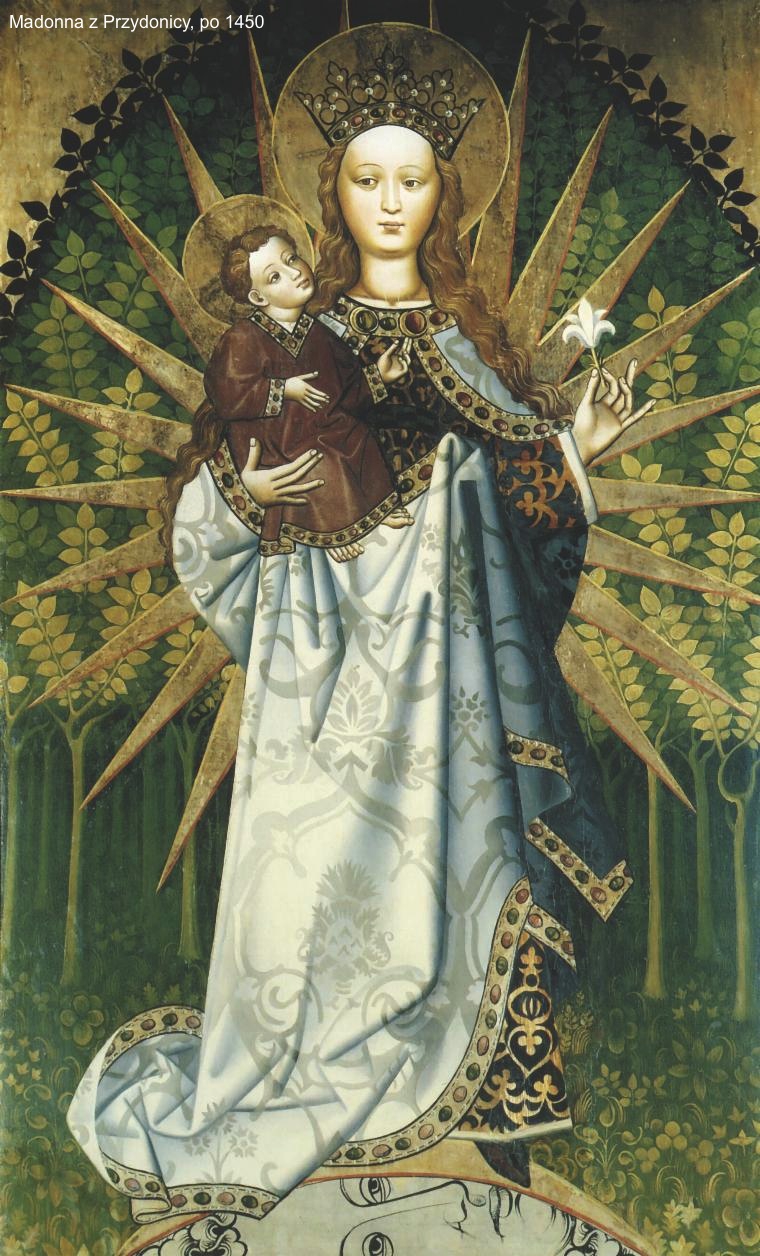