A coffin for a finger 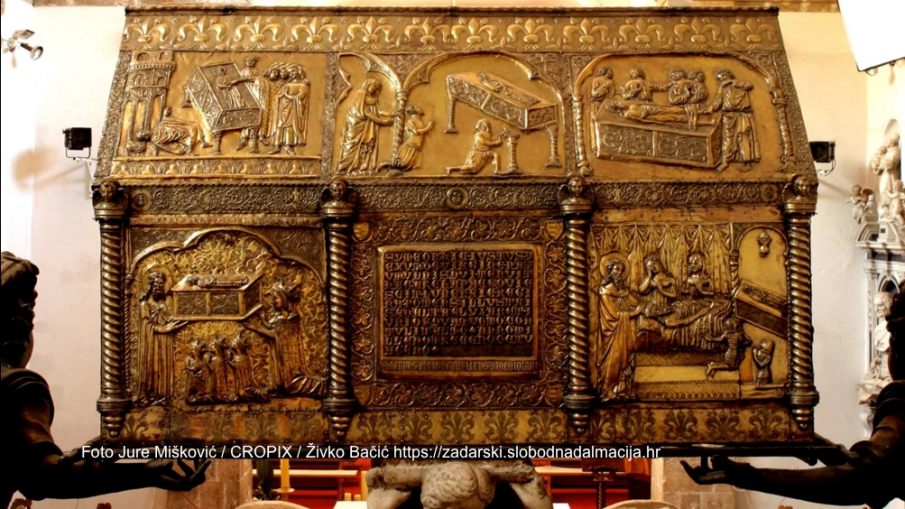 Dalmatia (Croatia) is a popular holiday destination and lots of people every Summer visit Zadar. While they are in that city, they may go to visit St Simeon church, where they may find a very interesting medieval chest. It contains the relics of Simeon – but it is not St Simon the Apostle, but Simeon the God-receiver, a prophet described in the Gospels, who recognised Baby Jesus as a Messiah during the Presentation in the Temple. 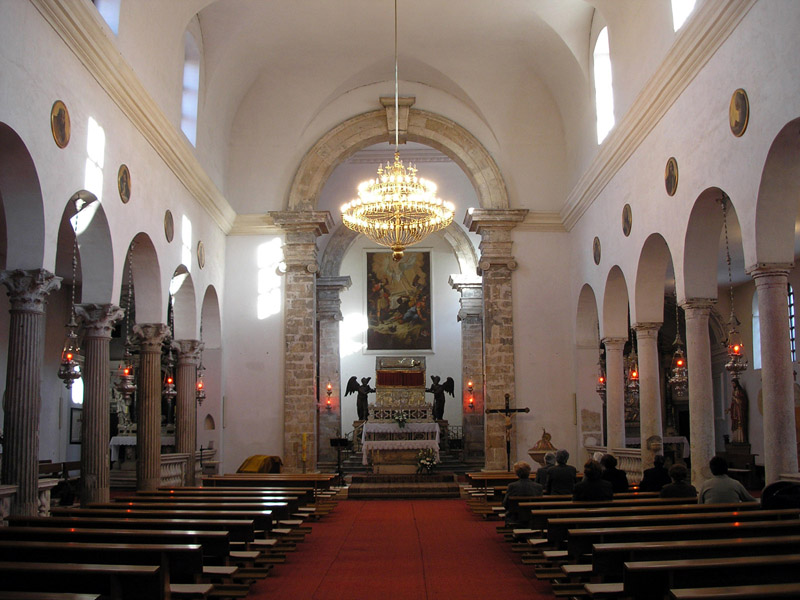 According to the legend, Simeon’s body was transferred in the 6th century from Jerusalem (?) to Constantinople, and at the beginning of the 13th century it was taken over by the Venetians (which means it was probably stolen during the infamous Fourth Crusade). Because of the storm the ship transporting the relics had to stop in Zadar, and the body remained there; by the way, the city was by that time taken over by Venice as well (in 1202).

After the Treaty of Zadar in 1358 the city was taken over by the Hungarian king, Louis of Anjou, who also became the king of Poland in 1370. 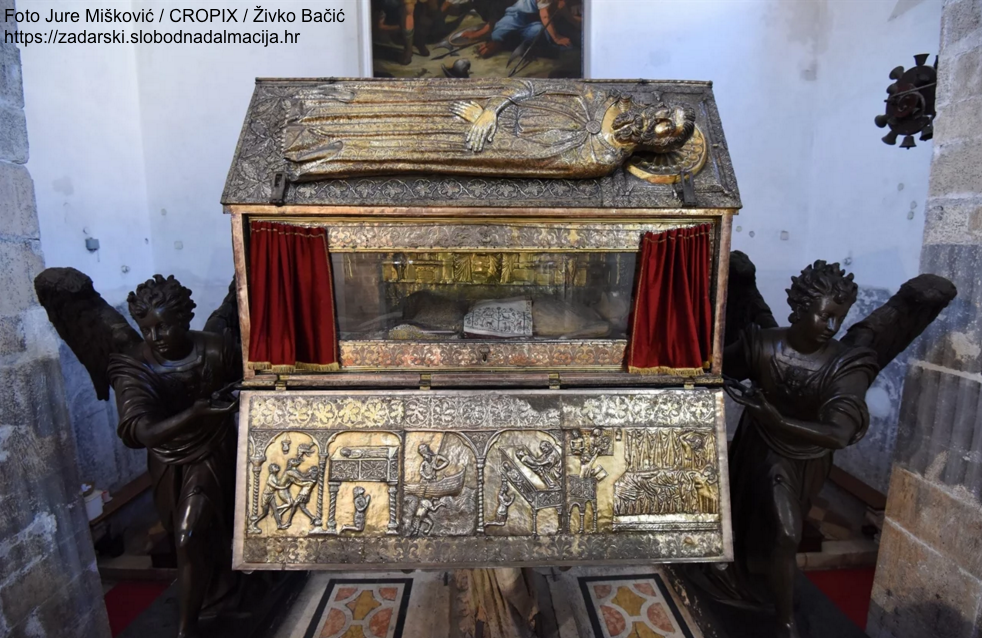 The chest is almost 2 meters long; it is made of cedar-wood and decorated with silver and silver-gilt plaques, depicting Simeon, legends related to his relics and miracles. It is a masterpiece of fourteenth-century gold-smithery, designed by Francis of Milan (Francesco di Antonio da Sesto), assisted by some local craftsmen. The chest was completed between 1377 and 1380, and it contains an inscription informing about its completion. 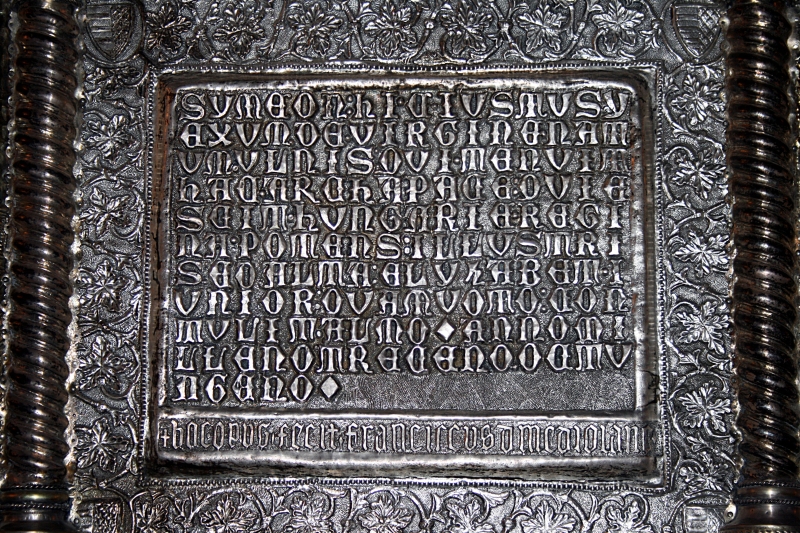 The donor of the chest was queen Elizabeth of Bosnia, wife of king Louis of Hungary. The chest includes the depiction of the queen and her three daughters: Catherine (who died in her childhood), Mary (a future queen of Hungary) and Hedvigis (a future queen of Poland). It is one of only two survived images of Hedvigis dating back to the time of her life (the other is her majestatic seal of 1385, kept in the National Archives in Cracow, Poland). Of course, these are not actual “portraits”, as the depictions are not individual and certainly do not provide any information about the ladies’ actual look. 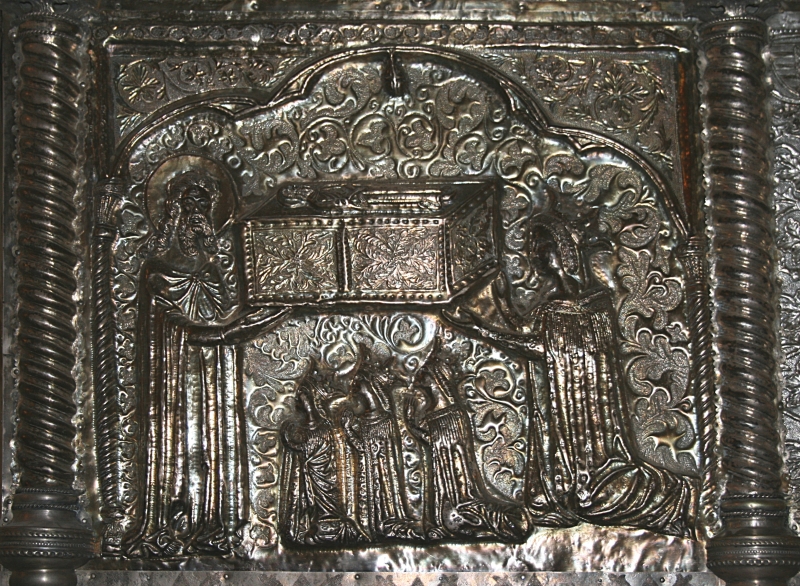 Medieval rulers were keen to be the donors of various religious works of art, including rich reliquaries, which were considered very prestigious donations. The mother of Louis of Hungary, Elizabeth of Poland, funded a new silver chest for the relics of St Stanislaus in the Cracow cathedral (that chest did not survive, it was unfortunately melted to pay for the new chest which is now in the cathedral in Cracow). But Elizabeth of Bosnia did not fund the chest in Zadar purely out of piety or just to show off. She did it because she was sorry.

Apparently, one day queen Elizabeth visited the church in Zadar and… she stole the finger of St Simeon! She just cracked it and hid under her dress! Perhaps she did that because she hoped the finger would work like a charm and help her conceive a son. However, the theft did not go well; she panicked and felt sick. She immediately assumed that her sickness is a punishment for the theft, sos he returned the finger and promised to pay for a new chest. The scene depicting the theft is actually placed on the side of that chest! 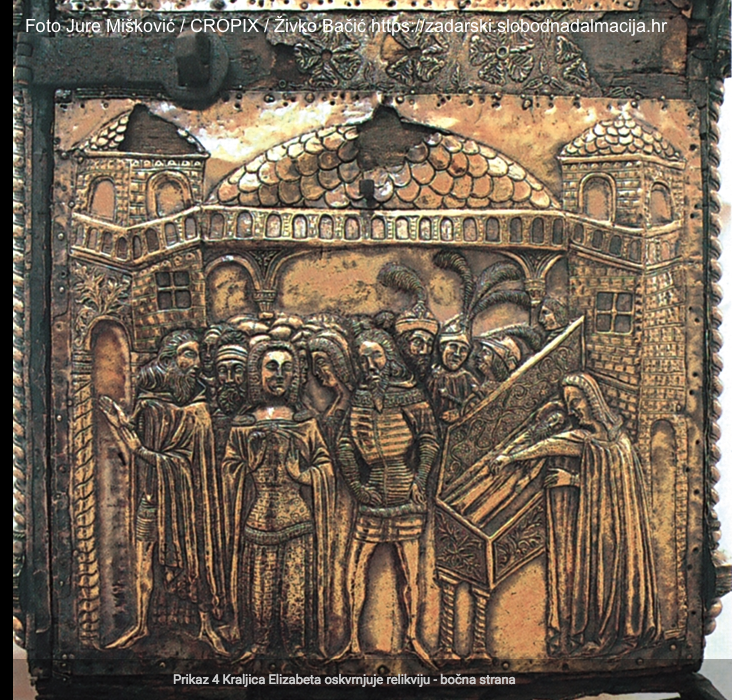 Well, Simeon perhaps forgave Elizabeth for what she did, but he did not answer her prayers and she never gave birth to a male heir. Additionally, she died of a sudden and unexpected death, which was not promising for the salvation of her soul, at least in the eyes of her contemporaries. She was strangled before the eyes of her daughter Mary, while they were both imprisoned during some fights over Hungarian throne that took place after king Louis’ death. The widowed queen and her daughter were imprisoned in the castle in Novigrad, about 30 km from Zadar. Elizabeth was not an innocent victim though; earlier she arranged a murder of king Charles of Naples, who took over the crown of Hungary as a last male heir of the Anjou dynasty. It seems that St Simeon was not willing to protect the donor of his chest against a violent death; apparently funding a great work of religious art is not enough to settle accounts with God for braking both the 5th and the 7th Commandment.