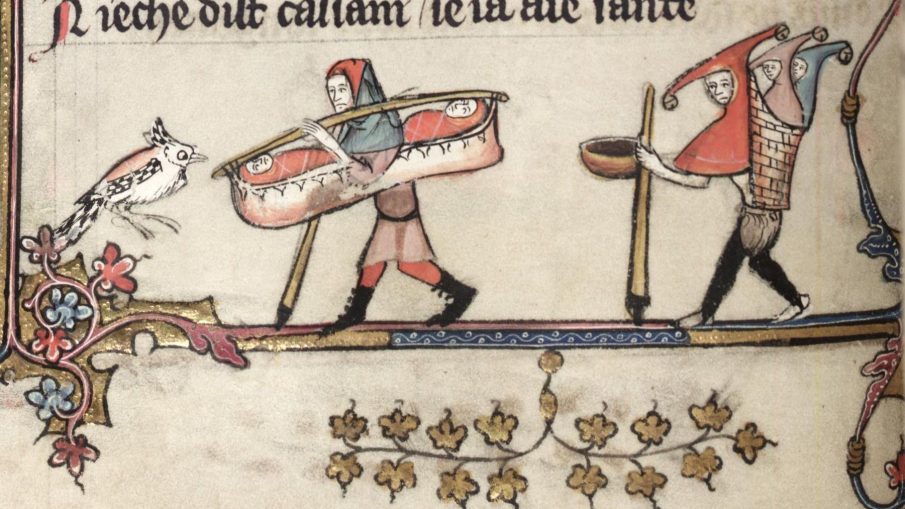 Scholars researching everyday life of the Middle Ages often use iconographic sources, that is paintings, miniatures, drawings and woodcuts. Although many of them depict religious scenes, we may find a lot of everyday objects placed in them; including items related to medieval childhood and nursery.

Childhood in medieval art was often depicted in the subject of the childhood of Christ and in the portraits of Holy Family. There were various apocrypha and legends referring to Jesus’ childhood; for example, in the 13th century there was a text telling about Christ’s first steps. Apparently, Mary and Joseph equipped Jesus with a wooden baby-walker, and thanks to some late-medieval pictures we may now see how such a thing may have looked like several centuries ago. In the Hours of Catherine de Clèves (after 1434, The Morgan Library and Museum in New York, M.917 and M.975 – I have once written about this manuscript HERE) we find a miniature depicting Holy Family: Mary and Joseph working, and Christ walsking around using four-wheeled walker. 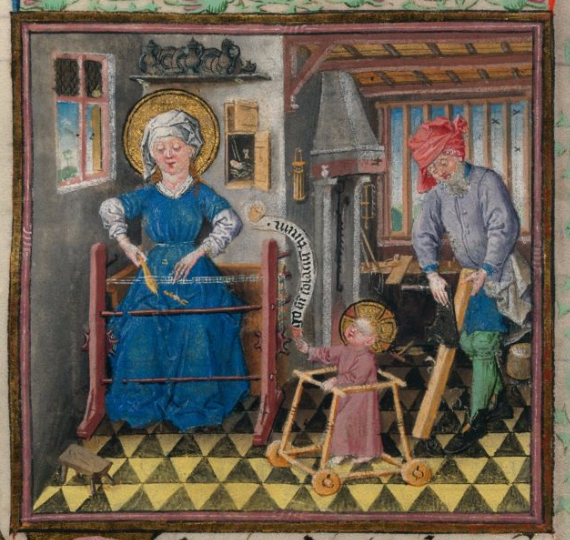 This medieval walker is called sustentaculum – it seems that it also came in a different form, a three-wheeled construction that required better-developed muscles from the child. Well, perhaps not as developed, as it has been depicted by the author of a panel from the Polyptych of the Annunciation with Unicorn from St Elisabeth church in Wrocław (Silesia, nowadays Poland, ca. 1480, today in the National Museum in Warsaw): 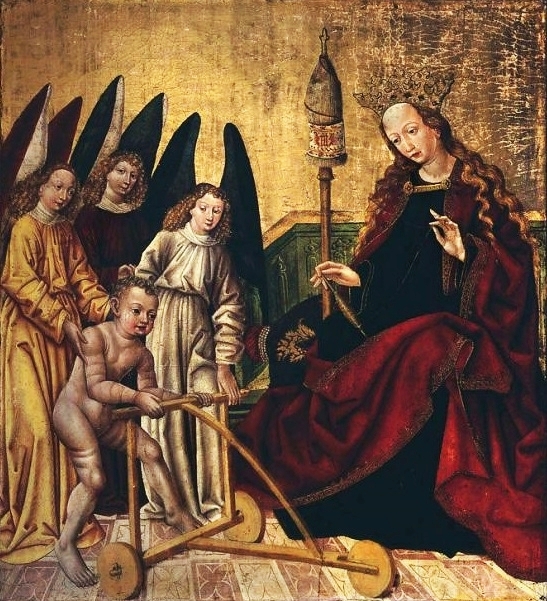 Silesian art has actually more interesting details on the subject of childhood: check out the panel of St Anne from Strzegom (late 14th c., National Museum in Wrocław). We can see St Anne with her daughter, Virgin Mary, on her lap; Mary holds her own Child, that is Christ, and Christ holds a medieval soother. 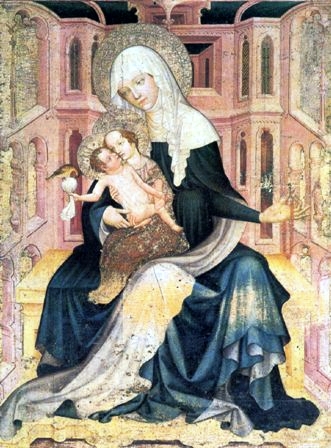 There are more examples of such round soothers: for example a statue from the SS. Peter and Paul church in Legnica (ca 1370, National Museum in Warsaw), or a painting in Our Lady church in Dębe (mid-15th c.): 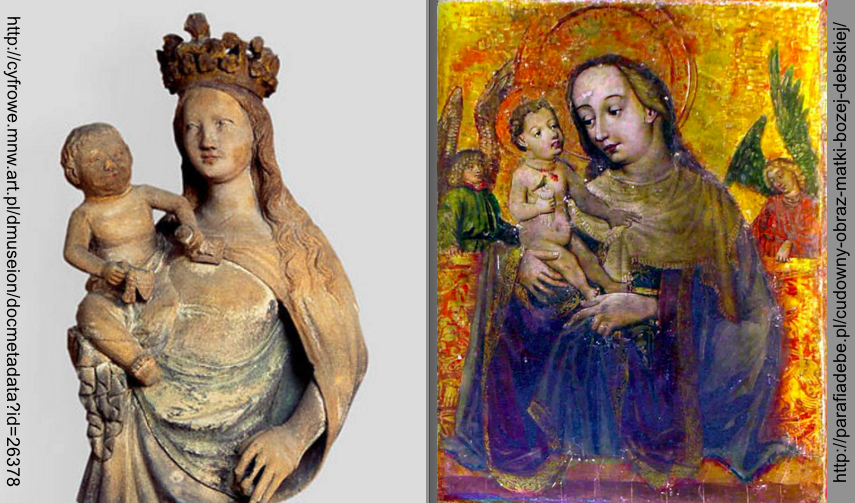 The well-known international example is a painting by Albrech Dürer (1506, in Gemäldegalerie in Berlin).

The medieval soother was made of linen and filled with… poppy seeds, milk and honey! When a baby sucked such a soother, he or she became really calm and quiet.

Naturally, in case of depictions of Virgin with Child we tend to interpret the soother as a symbol of future passion of Christ (poppy seeds were supposed to neutralise pain). Moreover, in spite of the soother, Child holds a bird: either a goldfinch (referring to Christ’s passion) or a siskin (symbolising Salvation).

But I think that sometimes we may just put the theology away and just enjoy the medieval depictions of everyday objects, used by our ancestors. It seems that our great-great-great(…)-grandmothers taught their children how to walk with the aid of wooden walkers. And I suspect they did not have a lot of troubles putting their babies to sleep: they just gave them poppy-honey soothers.

If you search for more examples of the sustentaculum I recommend you some decorations of the 15th c. Books of Hours in Morgan Library in New York (M.63 fol. 65r and MS G.4 fol. 140v), or of the 16th c. Books of Hours in Bodleian Library in Oxford (Douce 276, fol. 118r) and in Bibliothèque nationale de France in Paris (BnF NAL 392, fol. 26bis-r). Also, there are some interesting examples in Liber de proprietatibus rerum (Le Livre des propriétés des choses), depicting stages of life of man (BnF Français 134, fol. 92v and BnF Français 218, fol. 95r). 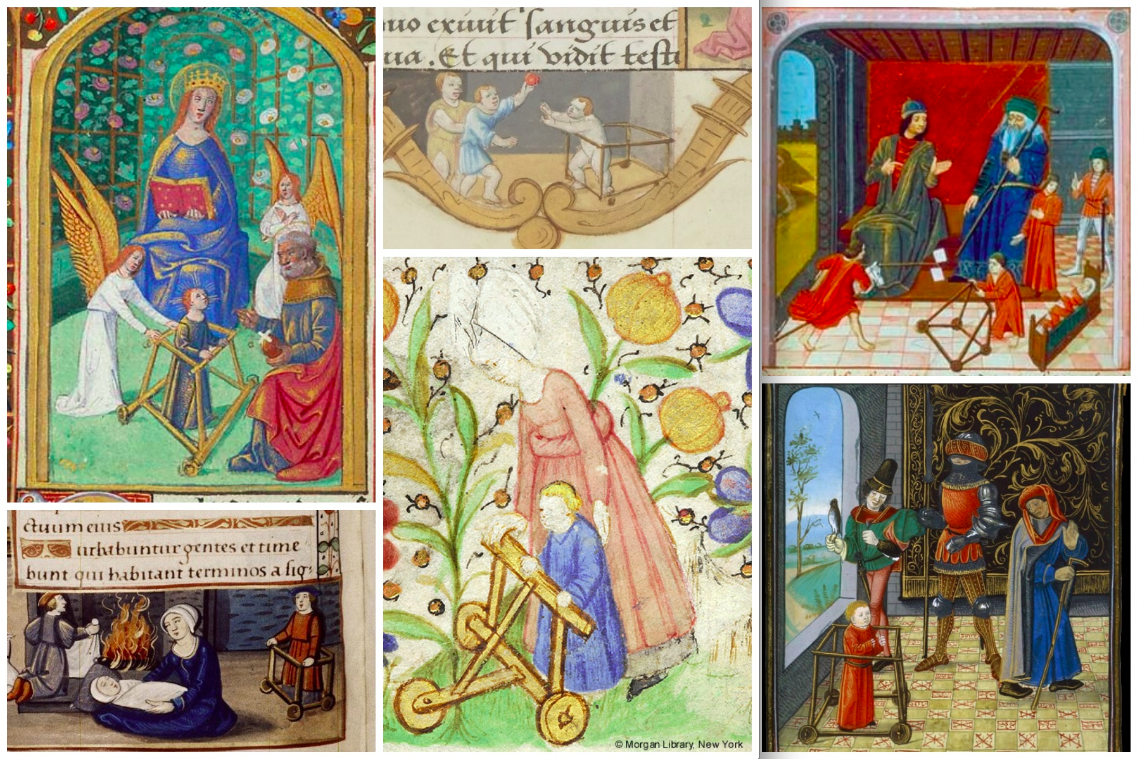 Sustentaculum also appears in a mural in the chapel in cloisters by St Catherine church in Cracow: the mural depicts Our Lady of Consolation and it is surrounded by the scenes illustrating verses of the antiphon from the vespers of Commune Festorum Beatae Mariae Virginis (“Sancta Maria, succurre miseris, iuva pussilanimes, refove flebiles, ora pro populo…”), where weak people have been depicted as group of small children, one of which is using a walker.

Also, Hieronymus Bosch depicted Jesus Child with a walker and a toy-windmill at the reverse of the altar-wing (in Kunsthistorisches Museum in Vienna): 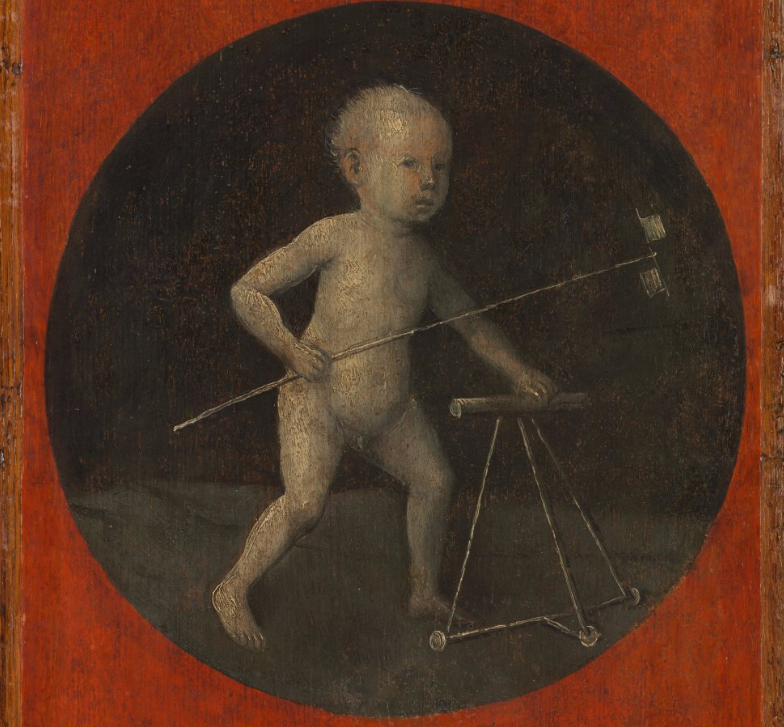 Of course if you know further examples, feel free to share in the comments below. 🙂