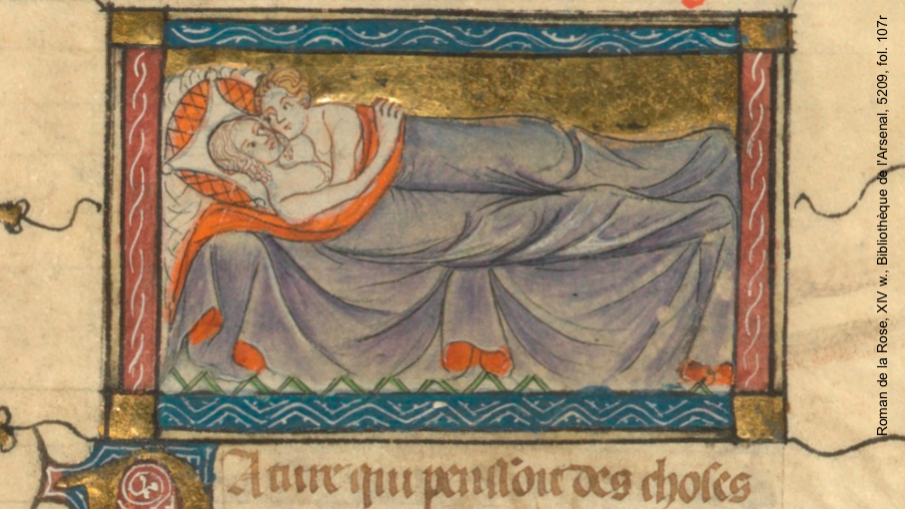 Roman de la Rose is a masterpiece of 13th century vernacular literature: it is a French poem consisting of two very different parts. The first one was written by Guillaume de Lorris, probably around 1225-1230, and the second part was written by Jean de Meun, almost 40 years later, around 1268-1282. The poem is an allegorical description of a relationship between a woman (the Rose) and a man who pursues her (the Lover: l’Amans). The first part presents the ideals of courtly love, while the second part basically mocks them. 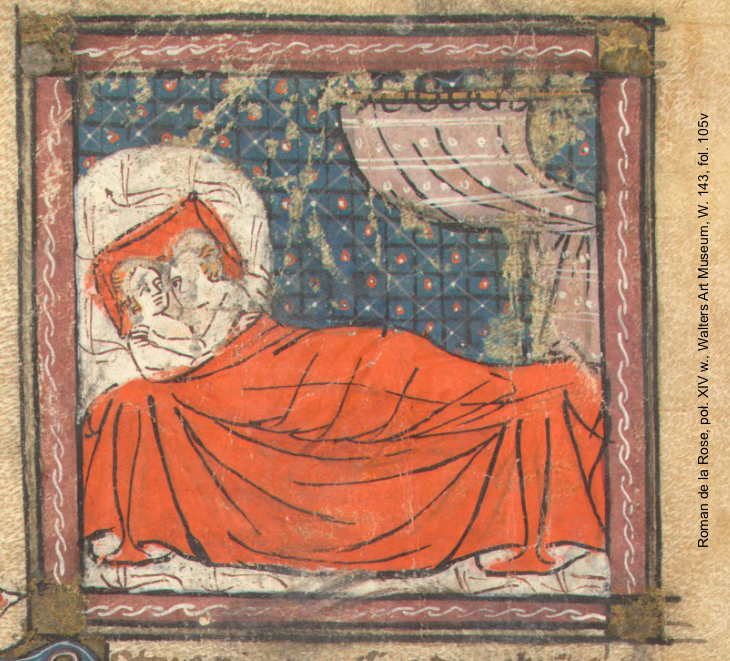 In the first part of the poem Guillaume de Lorris has written about a dream he had when he was 20. To make the story short: in that dream he reached an enclosed garden, he saw a rose bush and fell in love with one flower (the flower, of course, symbolising a girl). From that moment he did what he could to pick that flower, but that wasn’t easy, as the girl has been locked in a tower (in a castle) for protection. Eventually the castle has been taken, but that happened in the second part, written by Jean de Meun. Interestingly, a final scene of picking the Rose evolved into another metaphor describing a Pilgrim reaching the Sanctuary. The Pilgrim is equipped by the Nature with a staff and a sack containing two hammers. The Pilgrim’s aim is to put his staff into an aperture, which is not easy, as the girl turns out to be a virgin…

“I partly raised the curtain which covered the relics and approached the image to know the sanctuary more intimately. I kissed the image very devoutly and then, to enter the sheath safely, wished to put my staff into the aperture, with the sack hanging behind. Indeed I thought that I could shoot it in at the first try, but it came back out. I replaced it, but to no avail; it still recoiled. By no effort could it enter there, for, I found, there was a paling in front, which I felt but could not see. […] Nevertheless, I attacked so much that I discovered a narrow Passage by which I thought I might pass beyond, but to do so I had to break the paling. […] I would have relaxed for nothing until the entire staff had entered, so I pressed it through with no delay. But the sack, with its pounding hammers, remained hanging outside” 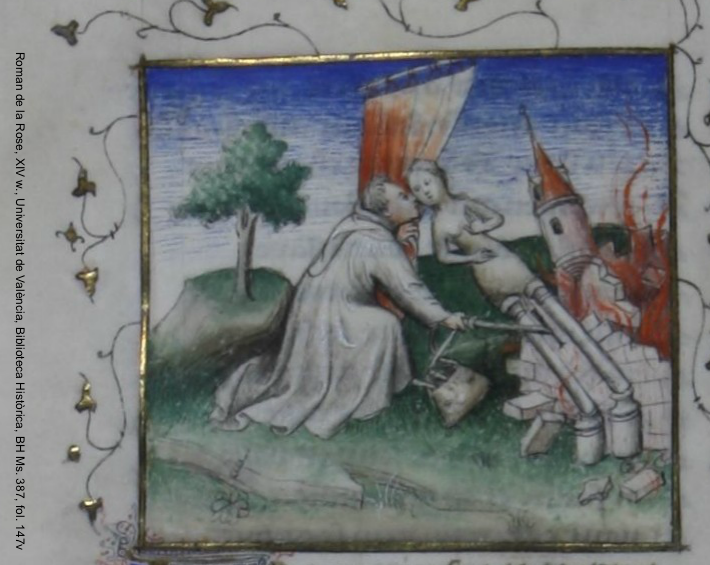 Succeeding in sticking the staff into the aperture (with the sack hanging behind) becomes an act of picking the Rose. In the background we may see burning remains of the castle that used to shelter the virginity of that girl. 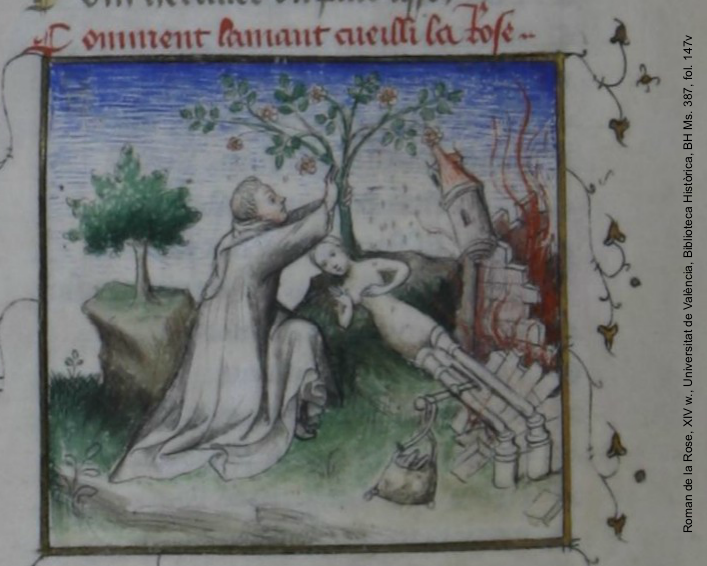 Still, that fragment is a metaphor, but the actual depiction of a couple having sex occurs in the other part of the poem. The text (in the part by Jean de Meun) contains a description of Nature’s combat with death: she manages to win only by reproduction of every species. Some of the manuscripts have this part illustrated by a strange miniature: a couple in bed is accompanied by a lady that beats a baby with a hammer! 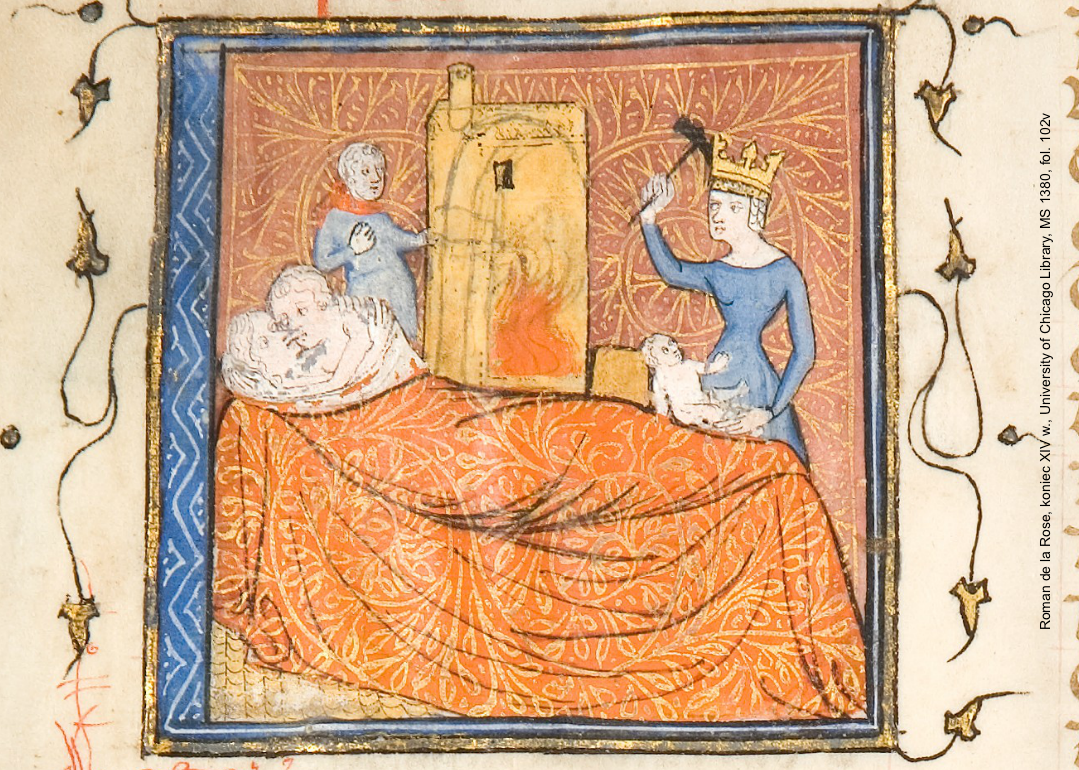 In fact this lady is the Nature, and she does not beat the baby, but creates it: that is Nature at her forge. 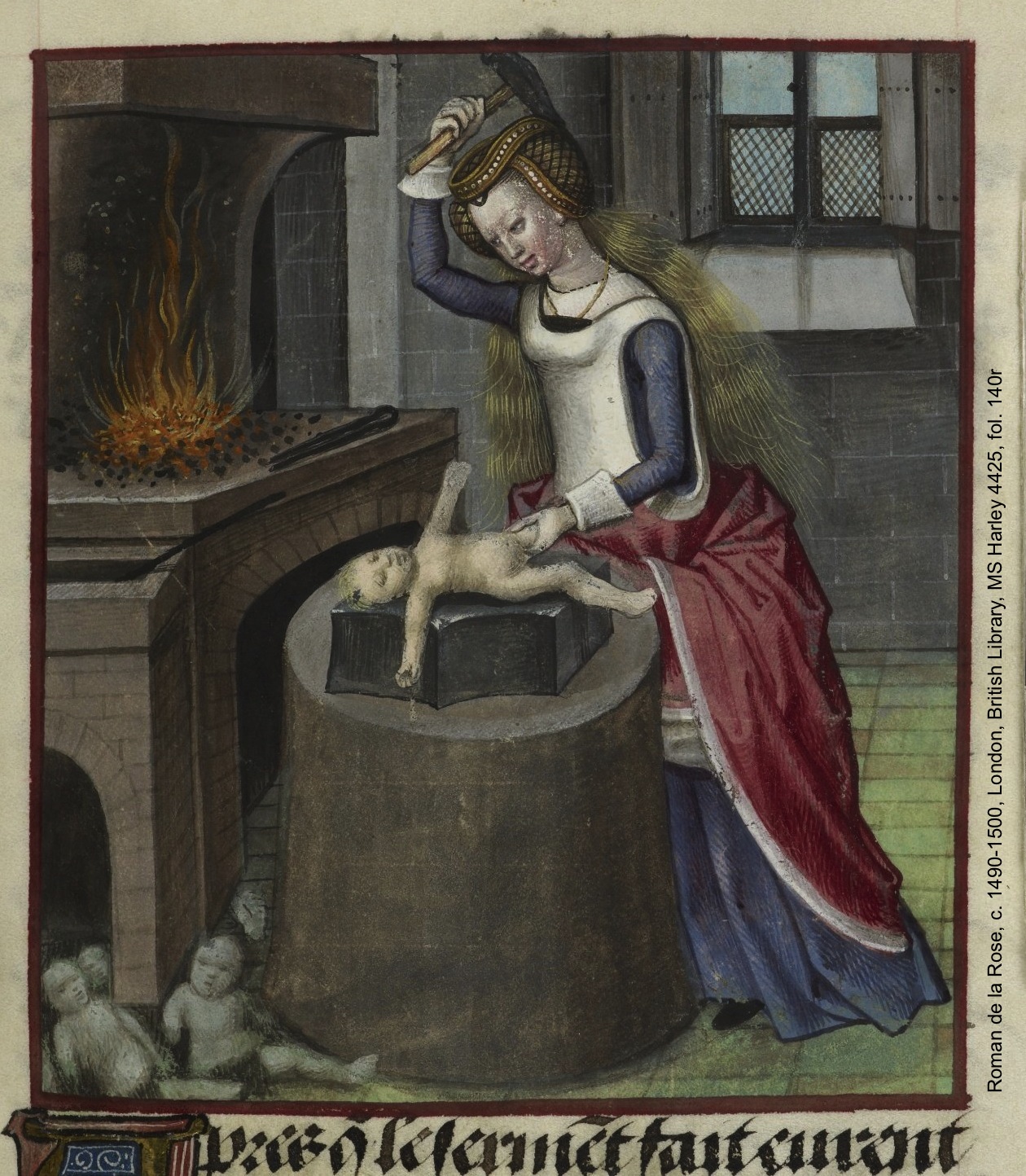 But if the Nature expects us to have as many babies as possible, that means that monogamy is not a good idea… and this 13th-century text not only justifies male laxity, but also Old Woman appears and advises women to have many lovers:

“Briefly all men betray and deceive women; all are sensualists, taking their pleasure anywhere. Therefore we should deceive them in return, not fix our hearts on one. Any woman who does so is a fool; she should have several friends and, if possible, act so as to delight them to the point where they are driven to distraction.” 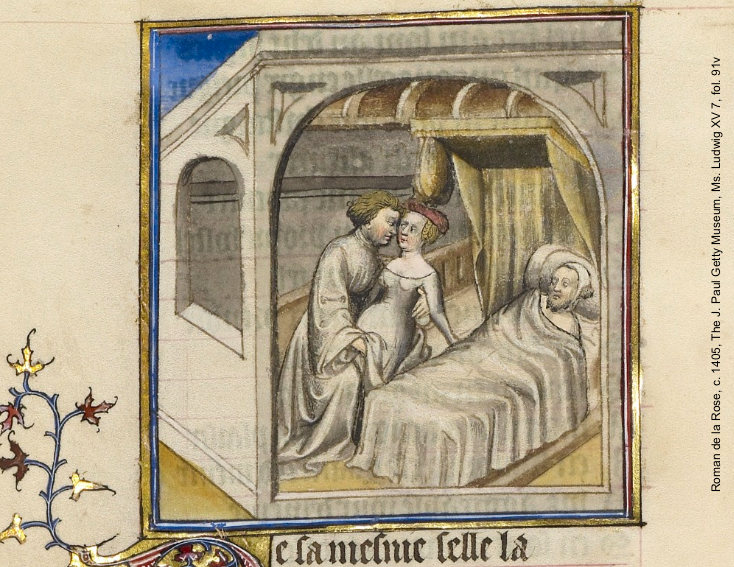 For we need to want to have a lot of sex, the Nature gave us the pleasure: and here we come to the issue of orgasm. Roman de la Rose teaches us that we should try to achieve it together:

“One should not leave the other behind; they should not stop navigating until they come together into port. Then their pleasure will be complete.” [verse 14299-14304]

On the other hand Jean de Meun was aware that sometimes women fake orgasm… as I usually say: everything already happened in the Middle Ages!

“And if she has no pleasure whatever, she should pretend that she has a great deal; she must simulate all the signs that she knows to be appropriate to pleasure so that he will think that she is taking with gratitude what she doesn’t think worth a chestnut.” [verse 14305-14310] 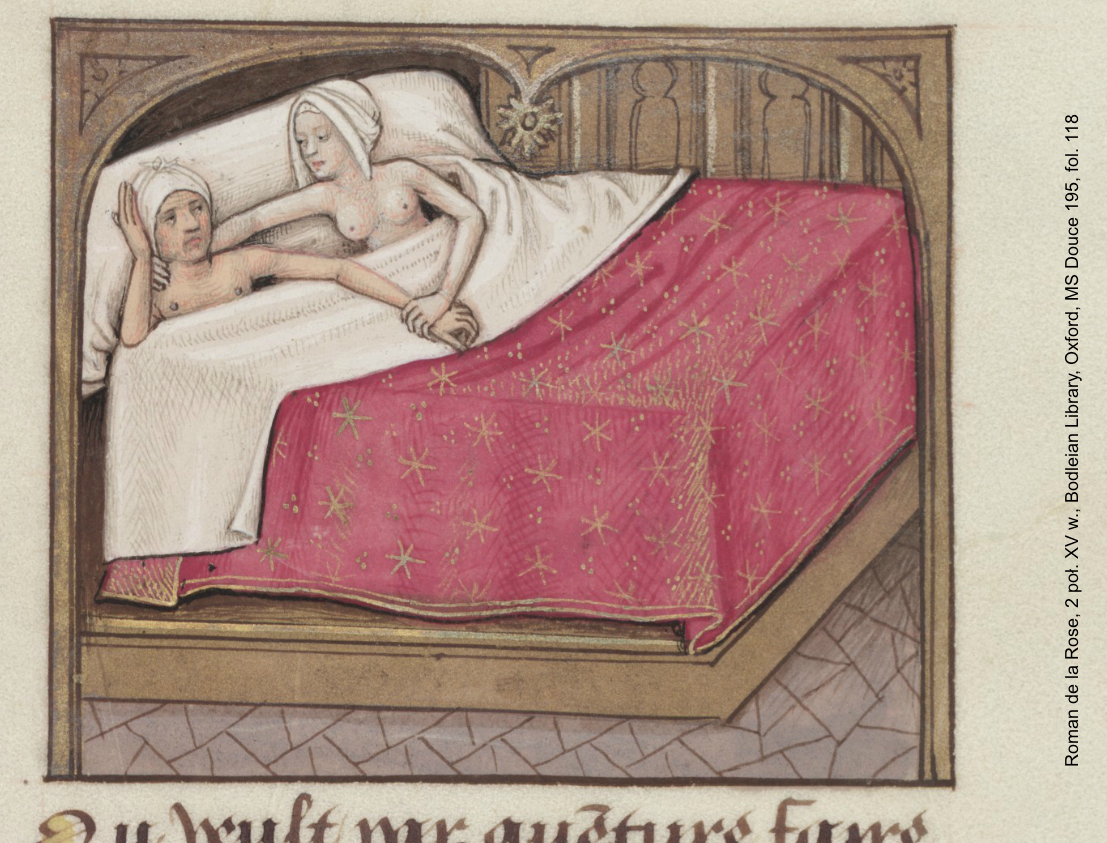 Roman de la Rose was indeed a medieval best-seller; today we have around 300 surviving manuscripts (the oldest dating back to the late 13th c., Bibl.nat.Fr. 1559), and there are two illuminated manuscripts in Poland. One of them is in the National Library in Warsaw and the other in the Czartoryski Library in Cracow; they are both available on-line in the service Polona (HERE and HERE). The poem has been printed many times; between 1481 and 1505 fourteen editions were published. Two different views on love, presented in two parts of the poem, became a subject of a huge discussion on French courts, dividing the readers in two groups. The early humanists tended to support Jean de Meun’s view, while the others contradicted it (e.g. the chancellor of University in Paris, Jean Gerson, published in 1402 a treatise against Roman de la Rose; it was also criticised by Christine de Pisan). No other medieval poem has been so vividly discussed even 200 years after its completion!

And the sad thing is that today most people never heard of Roman de la Rose.

Is the medieval literature too bold for the 21st century reader? 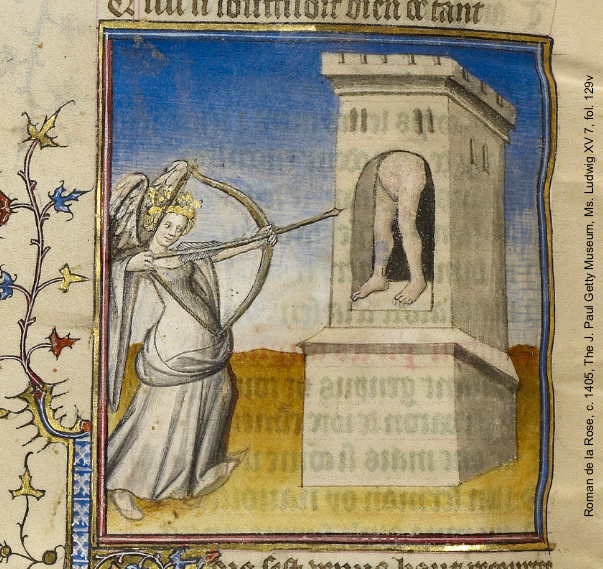