Home » Blog » Do not mess with a Hungarian girl
Thu01

Do not mess with a Hungarian girl 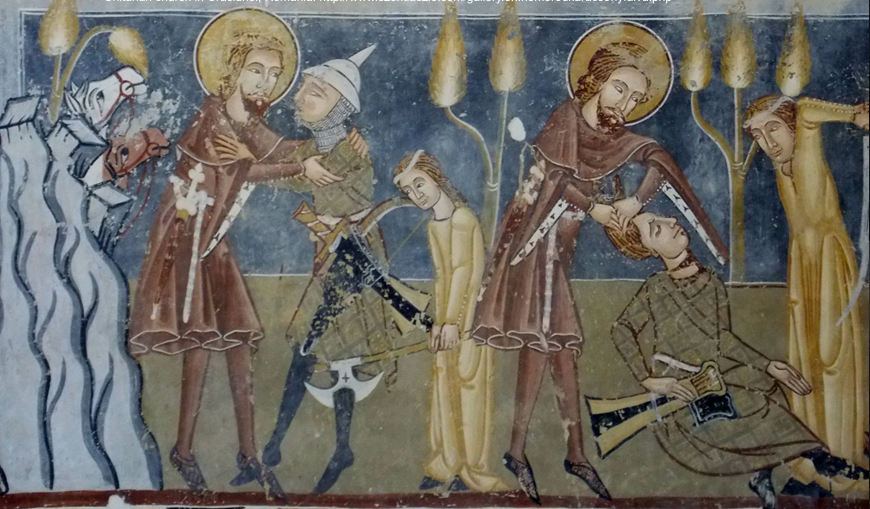 Today I would like to tell you about an interesting motif of Hungarian art, however it is about a Saint who also had strong connections with Poland. That saint is St Ladislaus, who is actually almost absent in Polish art, in spite of being a patron saint of several Polish kings. Moreover, St Ladislaus was actually born and raised in Poland!

St Ladislaus’ father was future Hungarian King, Bela I of Arpad dynasty, and his mother was a daughter of Polish king Mieszko II. Ladislaus was born in the 1040s when his father stayed in Poland, having been banished from Hungary. Later, in 1060, Bela defeated his brother and became the king of Hungary. There were some more quarrels and fights over the throne between the members of that family in the subsequent generations… To make a long story short: Ladislaus also eventually became the king, after the death of his brother, Geza I (d. 1077). Ladislaus himself died in 1095, and was announced a saint less than a century later. His legends developed since the 13th century; he became the patron saint of the Kingdom of Hungary. 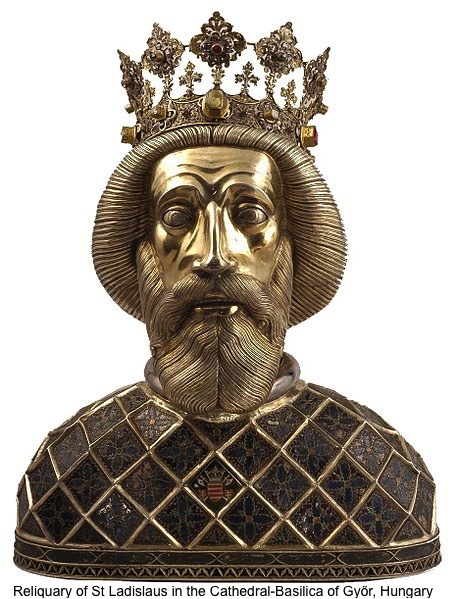 What I find especially interesting, are the medieval murals depicting the legend of St Ladislaus; there are actually quite many of them surviving in the former Kingdom of Hungary (that is, today, partly in Hungary, partly in Slovakia and also partly in Romania). They are really fascinating, focusing on one particular and rather bloody episode of the saint’s life. St Ladislaus was a warrior-saint, and judging from his iconography one of his most important deeds was killing the “Cuman”.

Fourteenth century Hungarian “Illustrated Chronicle” (Chronicon Pictum) tells the story about St Ladislaus seeing a pagan (“Cuman”, that is a Turkic nomad marauder) who kidnaped a Hungarian girl. The saint decided to save that girl, so he tried to chase the Cuman on the horse, but could not get him. Eventually, St Ladislaus shouted to the girl that she should try to pull the warrior off his horse, and so he did. Then prince Ladislaus wrestled with Cuman, and finally killed him. 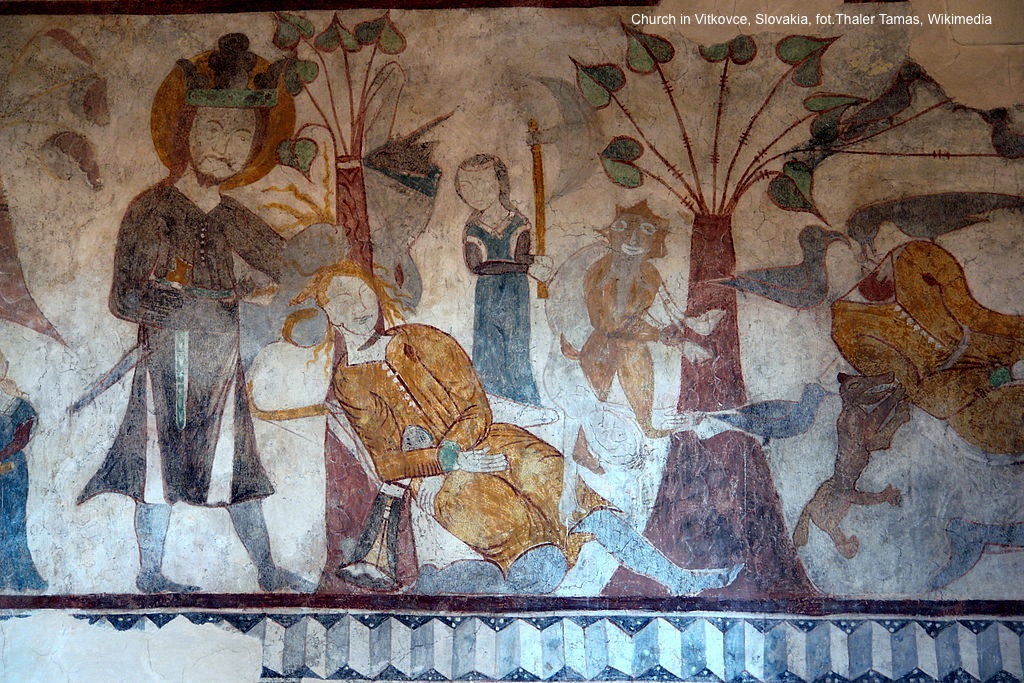 In my opinion the most interesting motif is the role of the girl in those murals. However the Chronicle does not describe the girl as joining the combat, the murals show her activity: she is helping St Ladislaus in his wrestle. As it seems, she was almost the main reason for Cuman’s defeat: apparently she cut his leg with an axe while he was fighting St Ladislaus! 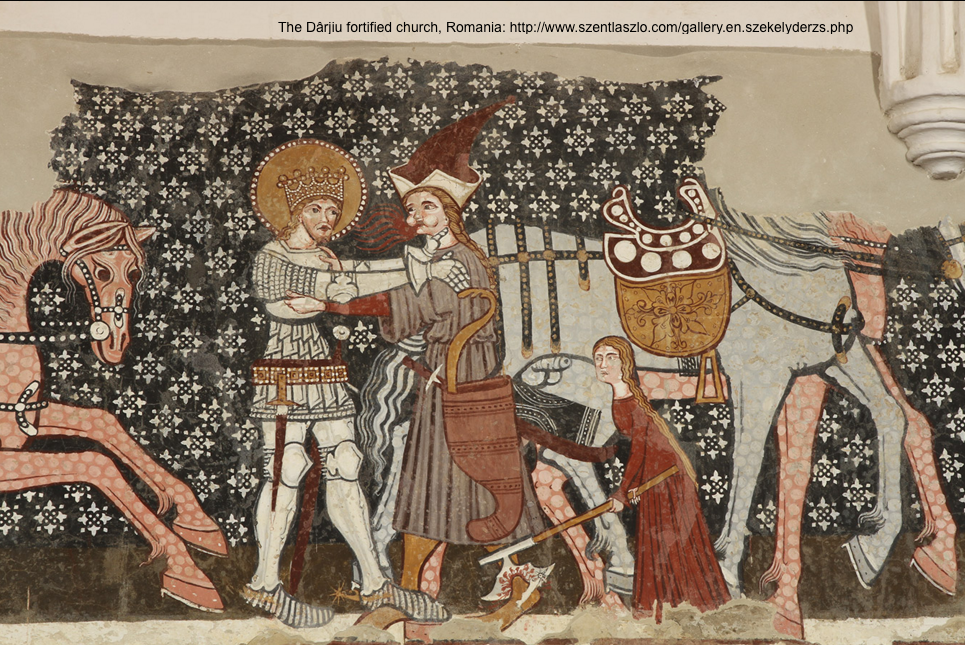 Even more surprisingly, the subsequent scenes (showing the death of Cuman) actually depict the beheading of the defeated completed by the girl herself, while St Ladislaus only held the enemy for her. 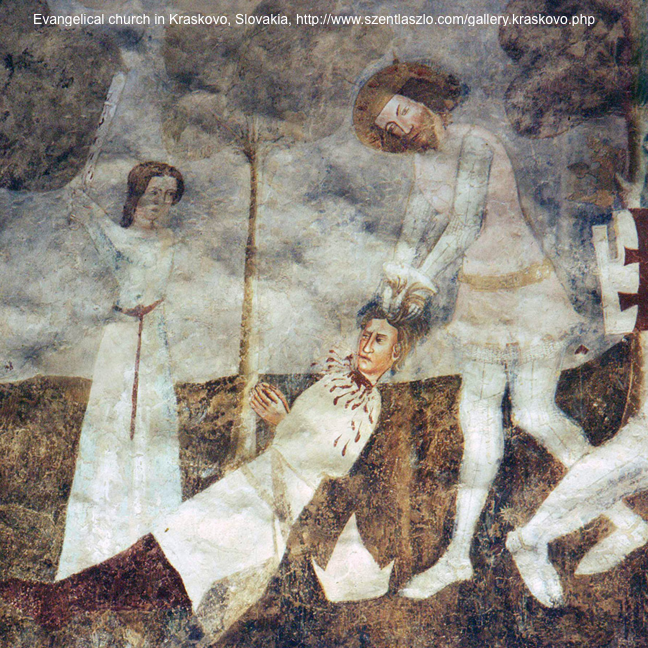 And finally both victors: Laduslaus and the girl, rest happily on the grass. The prince after rescuing a lady had a right to lay his head on her lap. And here we have a traditional motif transferred from the vernacular romances to the life of a saint: the knight saves the lady, kills the enemy, and as a reward he gains the lady’s favour. 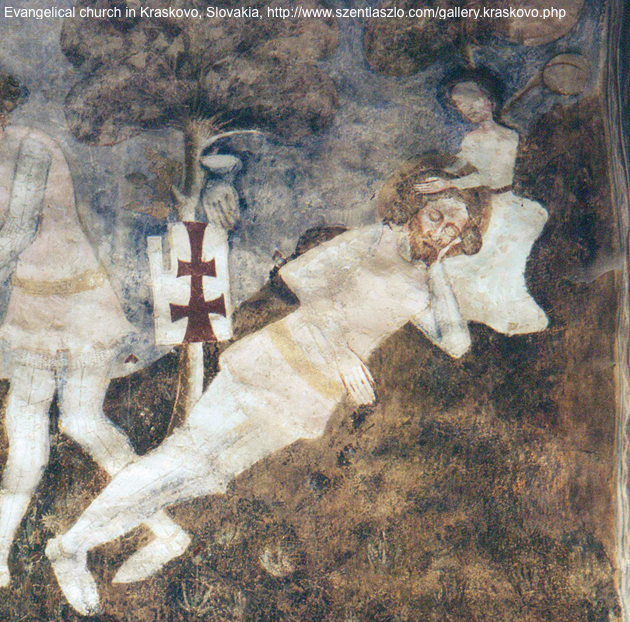 Nevertheless, we would usually expect the lady in trouble to wait to be rescued, instead of stepping into the fight. A bloodthirsty little girl, cutting her kidnaper’s leg and subsequently beheading him with her own hand, may seem a bit creepy after all. 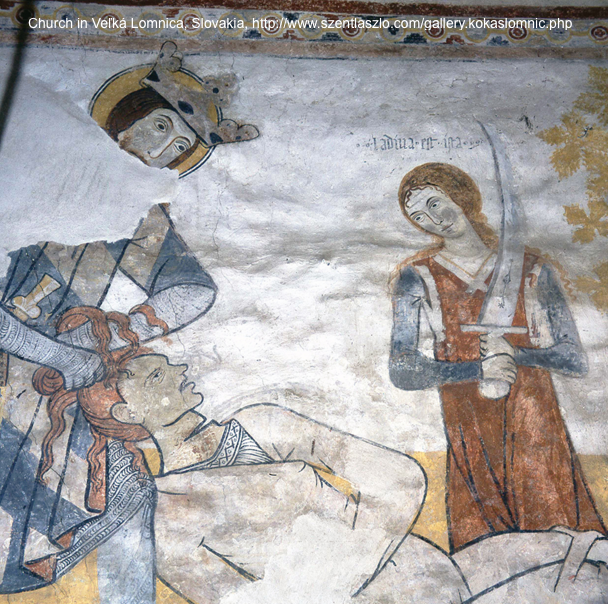 Quite many of the murals of St Ladislaus’ legend survived in nowadays Romania. I wonder: is there any chance that the bloodthirsty girl was a great-great-great…grandmother of the infamous Vlad the Impaller, called Dracula? By the way, “Vlad” is a short from Vladislav, which is Slavic version of the name Ladislaus. 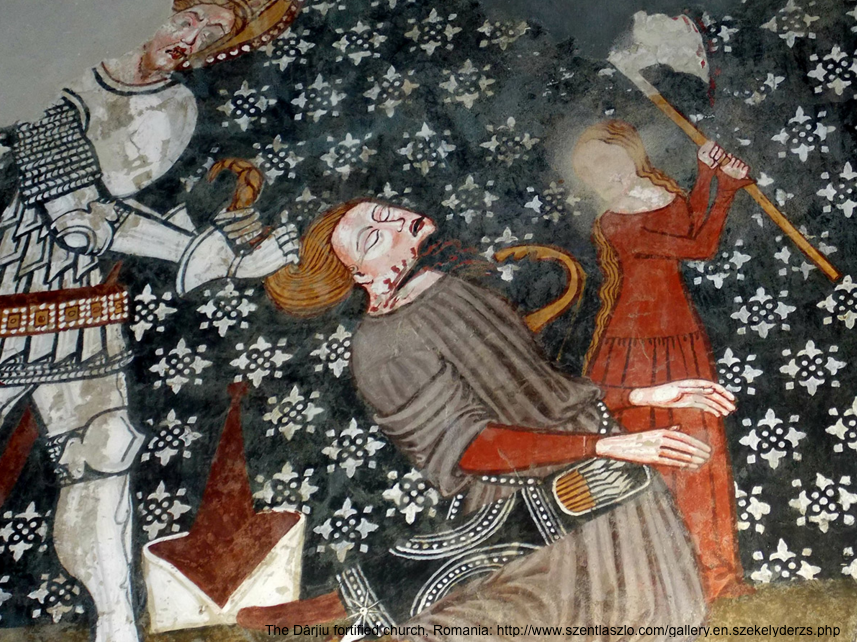 And perhaps she was simply a strong and confident woman in a medieval way. In that case St Ladislaus was a gentleman who denied himself a pleasure of killing the enemy and just held him so the lady could enjoy the fun herself. Afterwards, probably dirty with blood spatters, they both rested together on the grass, rejoicing in the chirp of the birds that flew down on the Cuman’s headless body. Now imagine that such a romantic story decorates over 30 churches in the former Kingdom of Hungary. 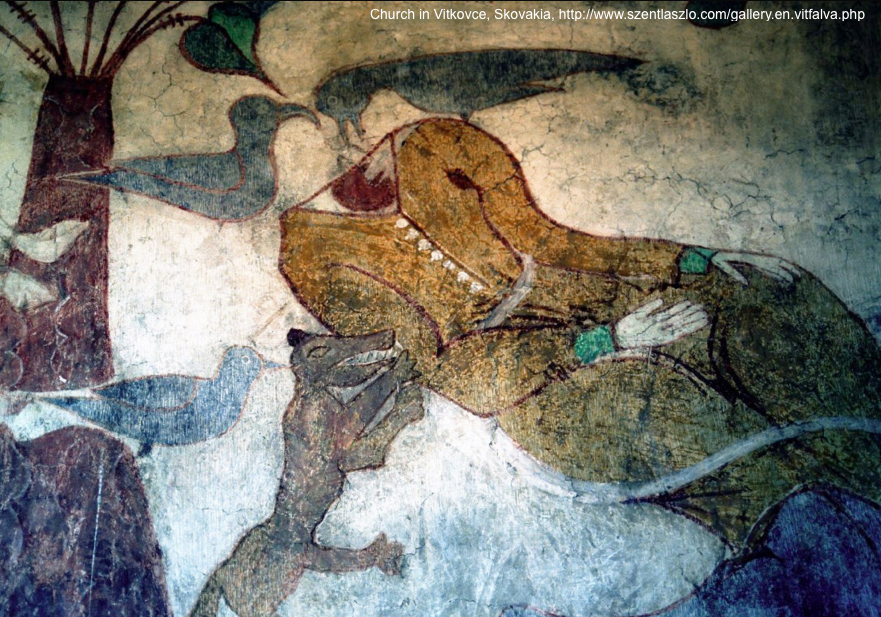 I recommend you checking out “Szent Laszlo” project’s website, with a lot of photos of various St Ladislaus’ murals: http://www.szentlaszlo.com/