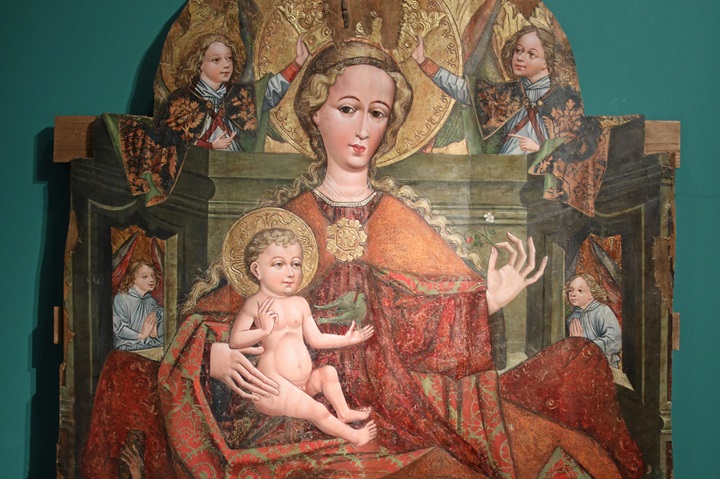 There is an amazing painting of Virgin with Child from Holy Cross Church in Żywiec (nowadays in City Museum there, as a deposit from parish Church of Our Lady in Żywiec), which has recently been displayed on a temporary exhibition in the National Museum in Cracow. It is one of the most interesting late-gothic panel paintings from Lesser Poland, and, interestingly, one of the less-known ones!

First of all it should be stressed that for a long time this painting was believed to have been a low-quality baroque piece. In was restored in 1980 (and again recently, in 2011-14) and during that restoration an amazing discovery was made: the picture was re-painted many times. The restoration actually revealed as much as 7 paint layers in the background ares of the painting! When the over-paintings were removed, the original picture was revealed: it turned out to be a masterpiece dating back to the 2nd half of the 15th century. These photos show the progress of the restoration: 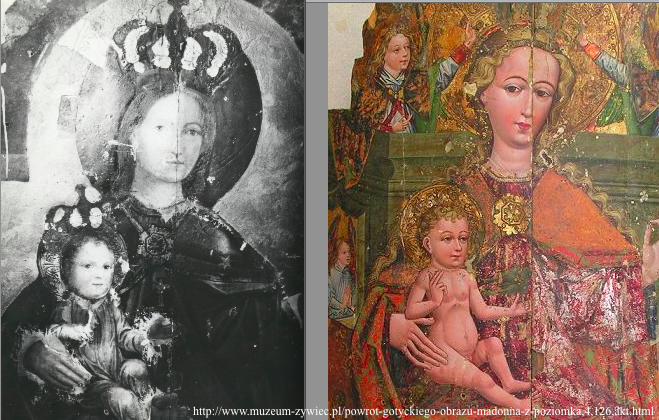 Not all the later additions to this medieval painting were removed during the restorations. For example, the donor survived – he was painted in the 17th century, along with the inscription Żywiec 1625. It is Andrzej (Andrew) Kozatius, a priest and canon from Cracow, who was born in Żywiec. He purchased the “old painting” in Cracow and had his own portrait added to it, along with his patron-saint, St Andrew. In the 18th century the painting was re-painted again, and cut to the funny shape it has today. Unfortunately, on this occasion St Andrew was cut in half. The original, late-gothic painting was created in Cracow in the 1460s or 1470, but we do not know its intended location. 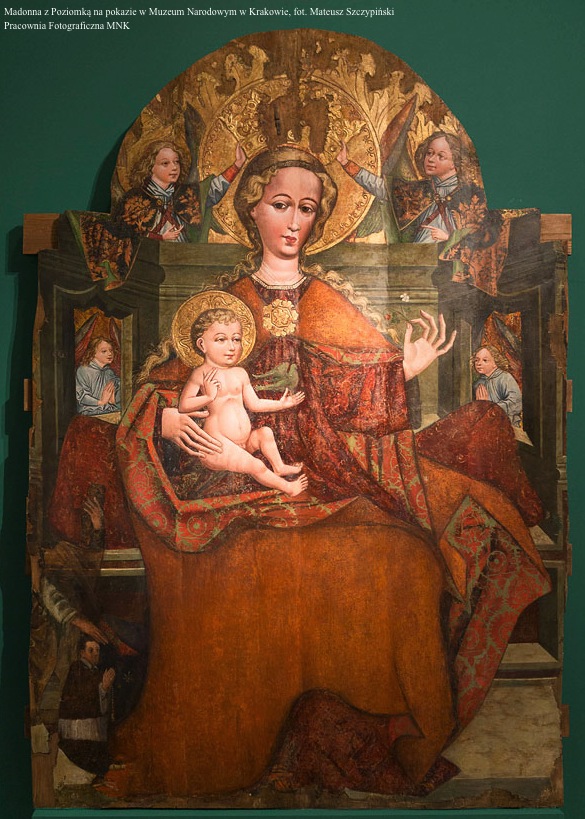 Virgin with Child is depicted here as the Queen of Heaven: enthroned and assisted by the angels. Her status is stressed by the colours the artist used: her cloak was originally blue, which is not visible now, as the paint layer did not survive. It is important that blue was one of the most expensive colours of the Middle Ages: it was made of a very costly mineral called Lapis Lazuli. Madonna’s blue coat was in fact a very extravagant and rich cloth. Her dress, on the other hand, just as a pillow she sits on, is red; that is the most expensive colour in the antique tradition. Purple clothes were very expensive in the ancient Rome or Greece. For example, Ovid wrote about people wearing red: ” Why carry all your fortune on your back?” (“The Art. of Love” by Ovid).

Another important motif revealed in conservation of this painting is the fact that Christ has been depicted as completely naked. That was actually quite popular in late-medieval art; depicting naked Child was understood as presenting the Body of Christ, so it had an Eucharistic meaning. Later, the religious art changed a bit and the undressed Christ was considered improper, so in many cases the images of Virgin with Child were repainted. Early Modern artists simply added dresses to cover up Child’s nakedness. That was the case of Virgin with Wild Strawberry, but there are other examples of such an attitude. For instance, there used to be a dress added on a Child in the painting in Corpus Christi Church in Cracow – now it has been restored and the dress was removed: 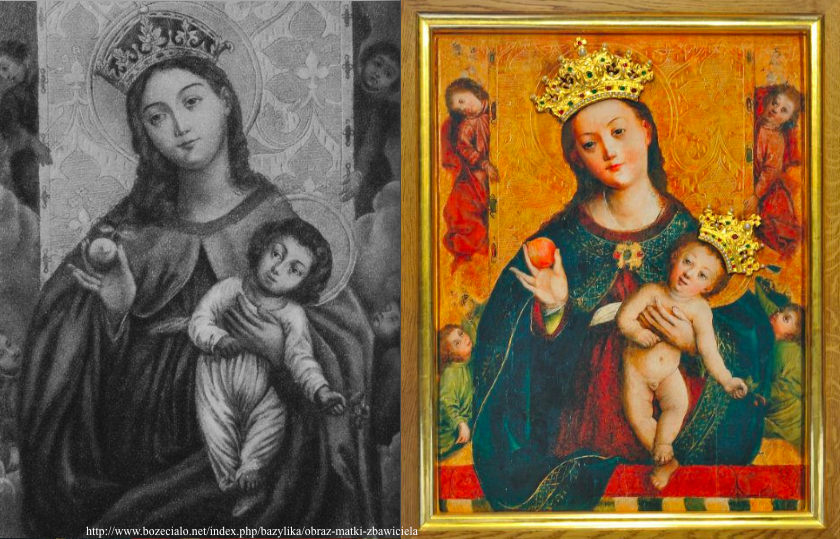 Before the restoration Christ Child in the Madonna with Wild Strawberry was holding a globe – but now it is a bird, as it used to be in a gothic original. It is uncertain what kind of bird it is; perhaps a goldfinch, symbolising Christ’s future passion? Goldfinches were believed to live among thorns (thus related to Christ’s crown of thorns) and their red spot on the head was associated with the Blood of Christ. However, in this case there is no red spot – perhaps it is just a bird, ready to fly, and symbolising the Resurrection. 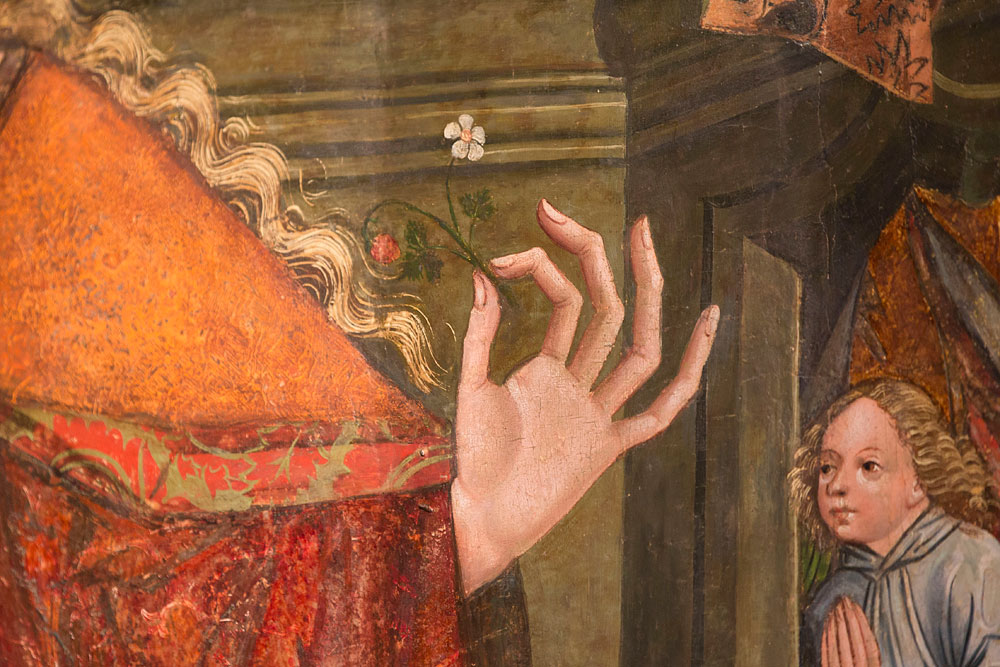 The most important, in any case, is a wild strawberry. That fruit was commonly depicted in medieval images of Paradise, so it may refer to the Promise of Salvation. But when we look closer we will see that Virgin in this painting holds both a flower and a fruit – together, on one twig. That is rather unusual: the flower should bloom first and then the fruit appears. Combining both fruit and flower is a natural paradox, intended to refer to the paradox of Mary, who was both Virgin and Mother. A white flower symbolises her virginity, while a red fruit refers to the “fruit of he womb”, Jesus.

On the other hand, strawberry represents sensual pleasures and delights, and as a fruit full of little seeds it may symbolise lust and fertility. A very good example of such a meaning of strawberry is a famous “Garden of Earthly Delights” by Hieronymus Bosch: in the middle panel of that triptych we may find people seeking for pleasures accompanied by huge strawberries. At first we may assume that such a symbolism does not correspond with the image of Virgin Mary, but in fact it does, once we analyse it as a kind of contradiction. Madonna with a strawberry may represent the victory of Virgin over temptations and lust. That is also one of the explanations of the late-medieval and Early-Modern images of Virgin with hares, as a hare was usually understood as a symbol of fertility and sexuality.

Interestingly, when I was a child, there was a popular TV-show for kids in Poland, featuring a Hare named “Wild Strawberry”. Is it just a coincidence, or another proof of ubiquitousness of medieval symbolism in nowadays pop-culture? 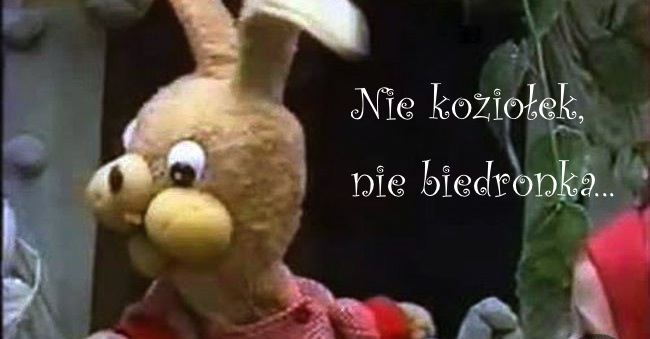 I would like to thank Mr Filip Chmielewski, curator of a temporary exhibition in the National Museum in Cracow, for helping me to get to the publications on this painting.

I have just received amazing photos showing the picture before and after most recent restoration – here they are! I thank Professor Marta Lempart-Geratowska for sending me these photos and for a wonderful lecture she recently had at the National Museum in Cracow! 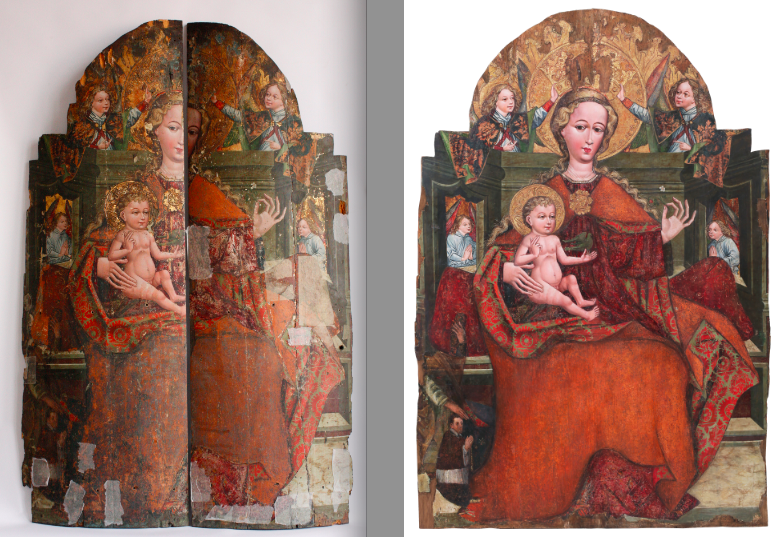