Do not touch, you may loose your hand!

On August 15th Roman Catholic Church celebrates feast of Assumption of Virgin Mary, as Jesus’ mother was supposed to be taken to Heaven at the end of her earthly life: her body and soul together. It should be noted though that the dogma about Assumption was officially announced by the Pope in… 1950! Of course the concept was accepted much earlier; in fact, the Assumption of Mary appeared in Western European art since the 15th century.

Meanwhile, before that (which means, actually, during the whole Middle Ages) the last moments of Virgin’s life were depicted in a different way. According to the Apocrypha, Mary died; she was buried and only three days later Christ came back from Heaven to take her body with him. As usually, when it comes to the Apocrypha, the main story is interestingly enriched by various fabulous motifs. Now we can follow them in the art.

Death of the Virgin, called Dormition (gr. Koimesis) was usually depicted in one way: Mary on her deathbed was surrounded by the Apostles. Theoretically, they should not be there, as after the Ascension of Christ, the Apostles went away to spread Gospel all over the world. Nevertheless, Mary did not wish to die alone, and her wish was granted, so all the Apostles were gathered miraculously around her bed for that moment. They flew back: to be precise, they were transported by the angels on the clouds.

In those paintings we may see Christ standing behind his mother’s deathbed; he is taking away her soul, depicted as a small figure. If that was an Assumption of soul and body, Mary and Christ would have been of the same size, but that is just a regular death: taking away the soul and leaving the body behind. Usually (although not always) the Apostles do not see neither Christ, nor Virgin’s soul. 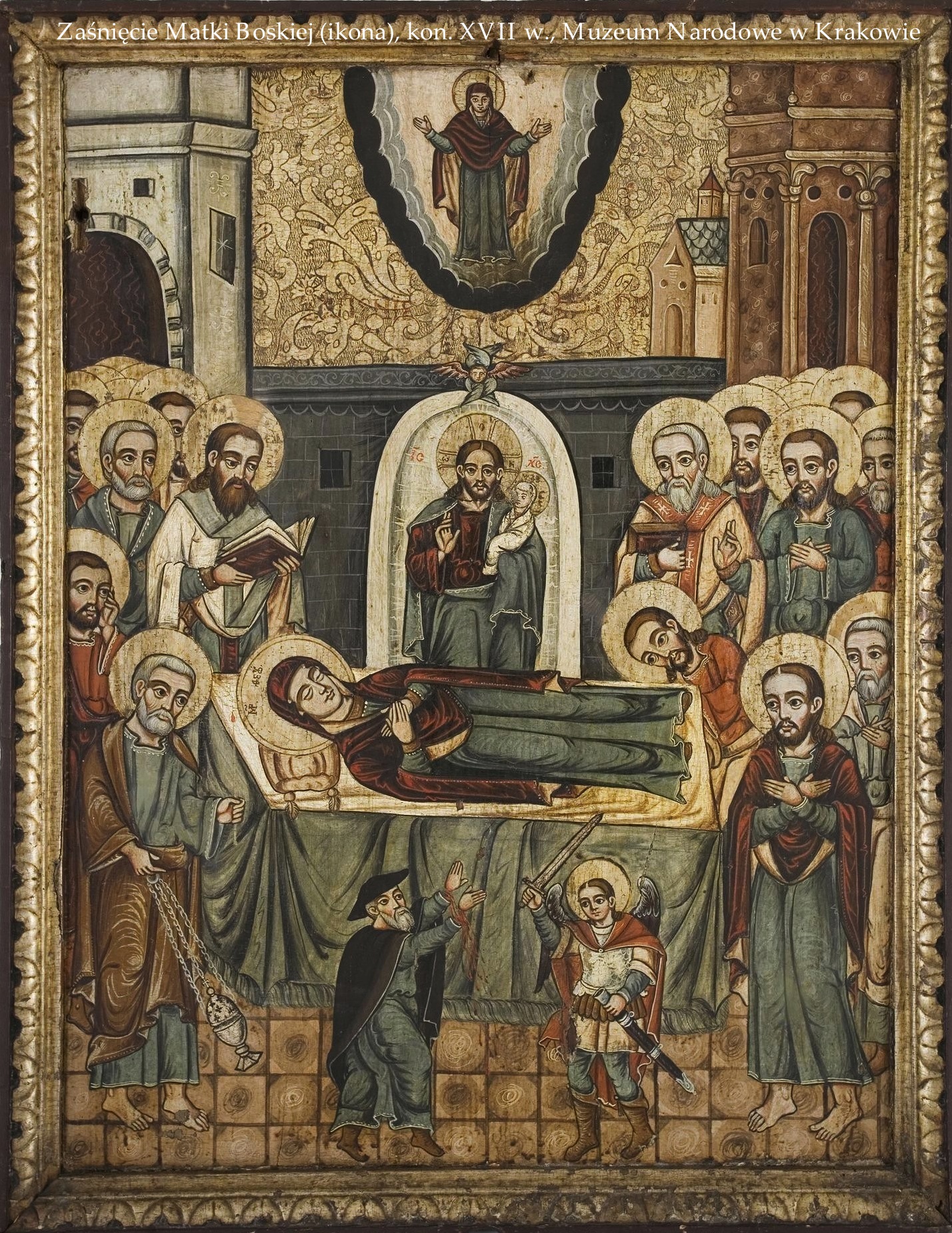 That is the way the Dormition of Virgin was depicted also later, especially in the Orthodox art. The icons of Koimesis often contain another interesting motif: an angel cutting off some guy’s hands! 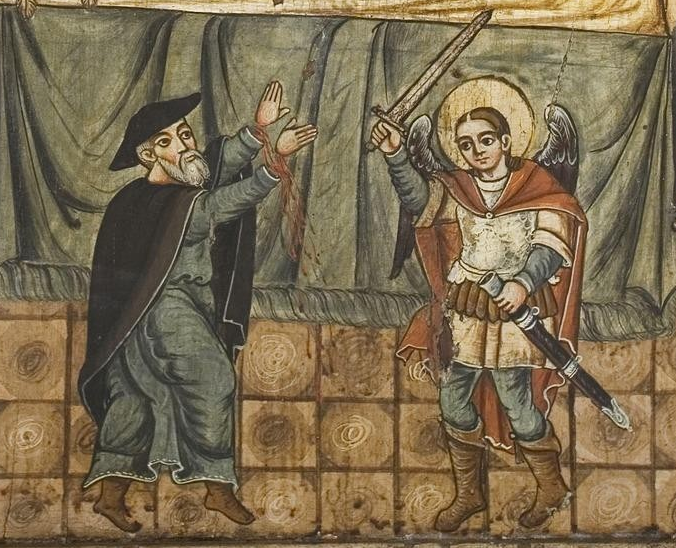 That is another story that derives from the Apocrypha; to be exact, it comes from the description of Virgin’s funeral. Apparently, there were some infidel Jews who tried to disturb the conduct, but they didn’t because they went blind. One of them, called Jephonias, tried to topple the funeral bier, and as a result his hands went off. They were cut by archangel Michael – according to the texts, the hands stuck to the bier and hanged there, separated from Jephonias’ body.

Of course, Jephonias got rather upset, but then everyone can get a second chance when it comes to God and Virgin Mary. Jephonias converted and prayed very eagerly, so finally his palms grew back to his arms. Additionally, some of the other Hebrews were healed as well; Jephonias came back to his city and told everyone what had happened, and those of the blinded who believed him, got their sight back. 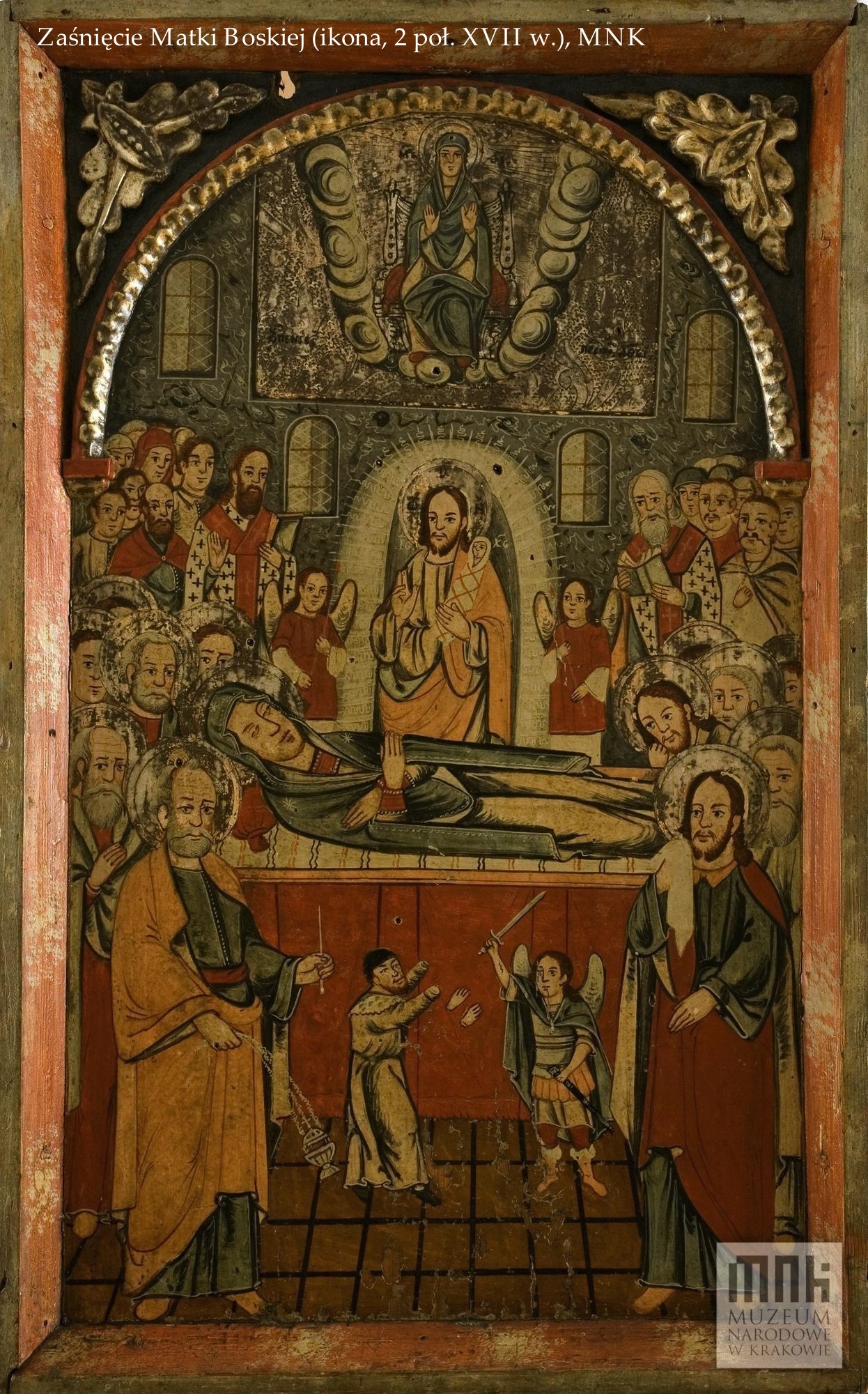 The motif of an infidel Jewish man or woman was actually used several times in various Apocrypha. Usually such person wanted to check out something by touching it, and as a result his or her hand went paralysed, or simply dropped out. Similar thing happened to a midwife, that wanted to check Virgin’s virginity when Christ was born (her hand got paralysed) – that we may read in Apocrypha about the Nativity. Well, it seems that empiric approach is not always a good one… and in fact, sometimes indeed it is better to believe some things without further examination. You know that very well if you ever thought about checking out yourself if a tongue may really freeze to a door handle during the severe winter.