St. Luke is drawing the Virgin 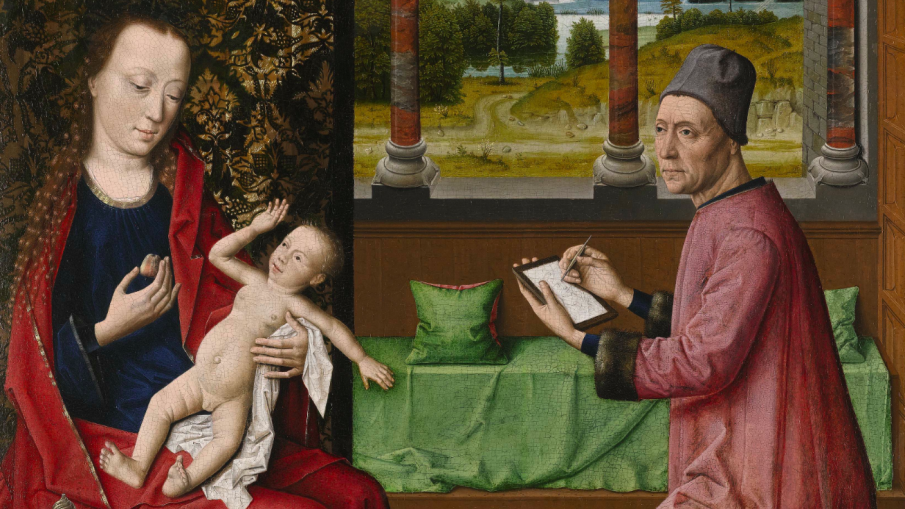 In 2016 the Bowes Museum (Barnard Castle, County Durham, UK) acquired an early-Netherlandish painting of St. Luke drawing the Virgin and Child. It is attributed to the workshop of Dirk Bouts, one of the most important Netherlandish painters of the 15th century. It was probably not completed by the Master himself, but rather by some other artists working for him. Undoubtedly the most puzzling element of this composition is the pose of the Child, which seems rather awkward. Most likely this pose is not just the result of the painter’s artistic skills (or the lack of them). I believe that this pose had a very particular meaning. 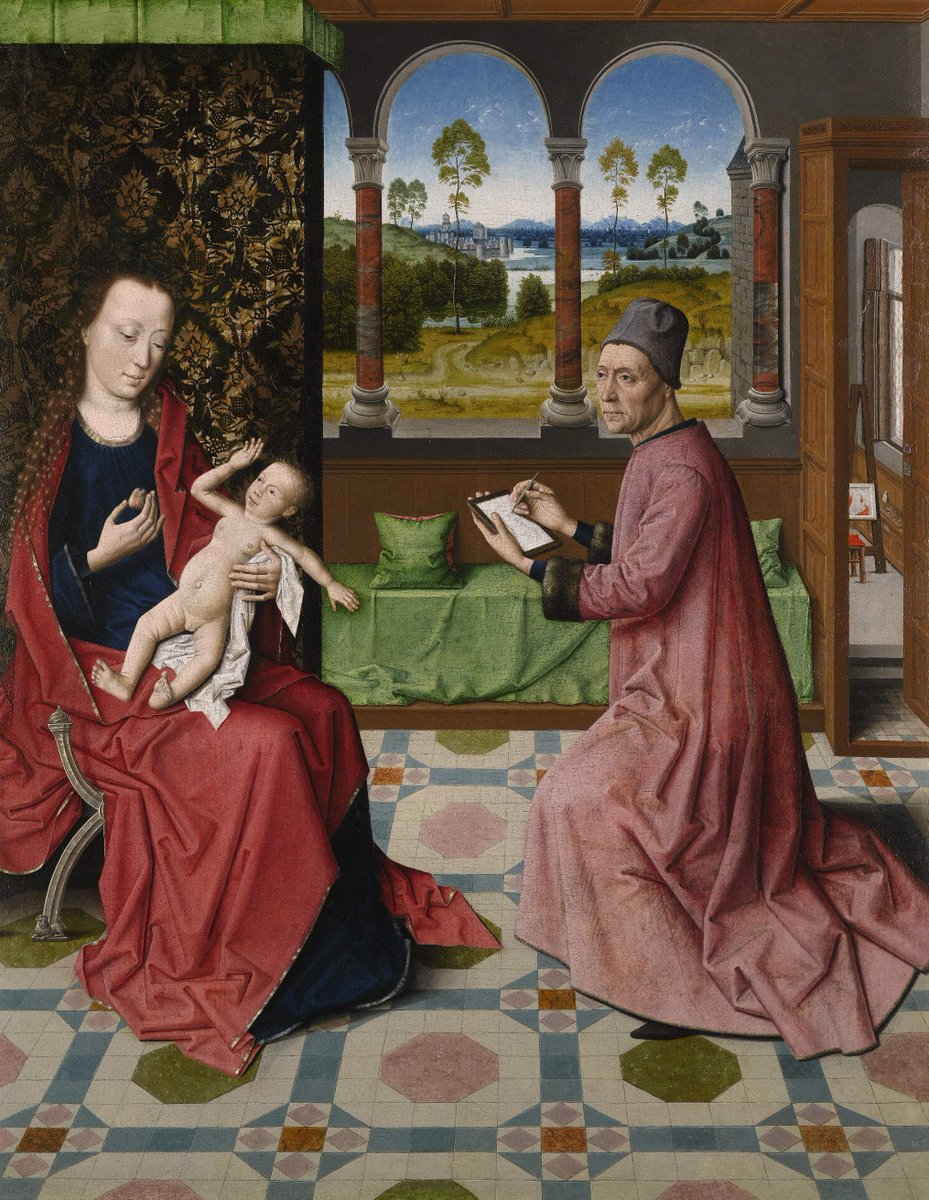 According to the tradition St. Luke was supposed to have been a painter and because of that medieval painters’ guilds considered him their patron saint. They venerated St. Luke and established chapels and altars dedicated to him. The legend said that St. Luke painted Virgin and Child on the table one day, and as he actually had them posing, the portrait was a “true image”, depicting sitters’ real-life features. That legend was originally related to the “Hodegetria” type of Virgin with Child, with the prototype once kept in the Hodegon Monastery. Later the legend spread and was attached to various miraculous images of Virgin with Child. 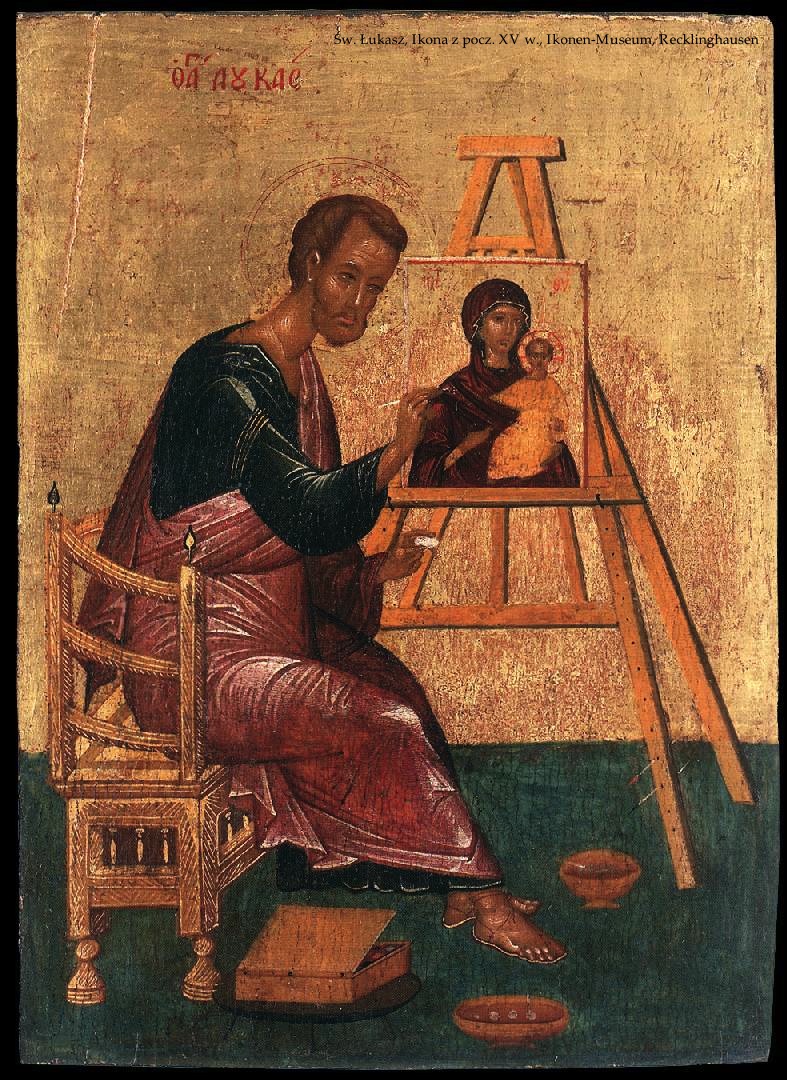 I believe that this is the reason for the awkward pose of the Child in case of the Bouts’ version. Depicting a particular type of Virgin-and-Child image was most likely the way of presenting that type as a “true image”. For example, in the most popular 15th century version by Rogier van der Wyden, the type is Madonna Lactans (Nursing Madonna): 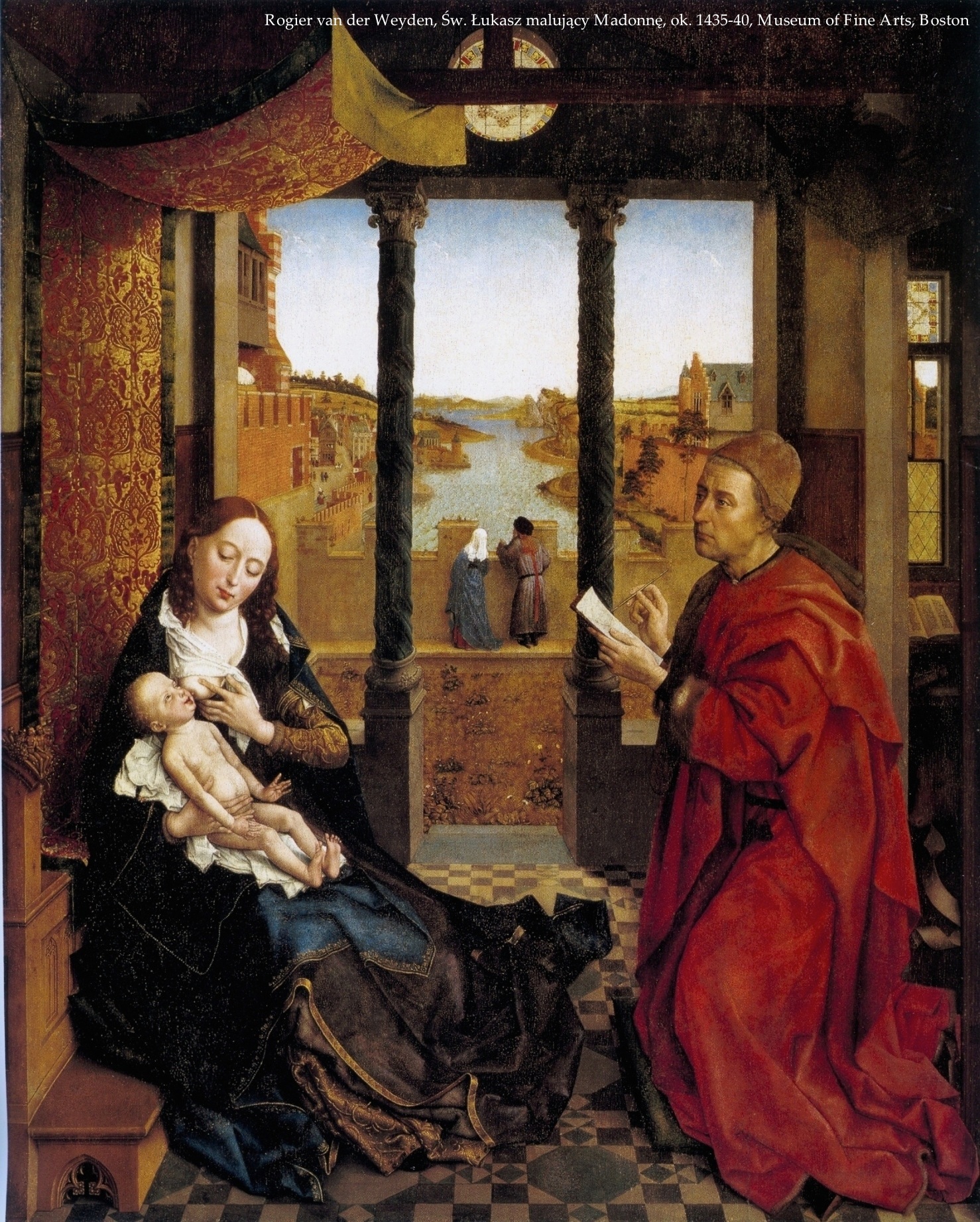 On the other hand, there is a very interesting example which shows a different approach: it is a part of a retable from the painters’ guild chapel in St. Magdalene Church in Wrocław (Silesia, Poland). It is attributed to Jacob Beinhart (dated to early 16th c.) and now displayed in the National Museum in Warsaw. In this case St. Luke is painting Virgin weaving a dress for the Child. According to the Apocrypha, it was the same seamless robe that soldiers who crucified Jesus cast lots over, as it miraculously expanded when Jesus grown up, and so he wore it all his life (and it never got dirty!). 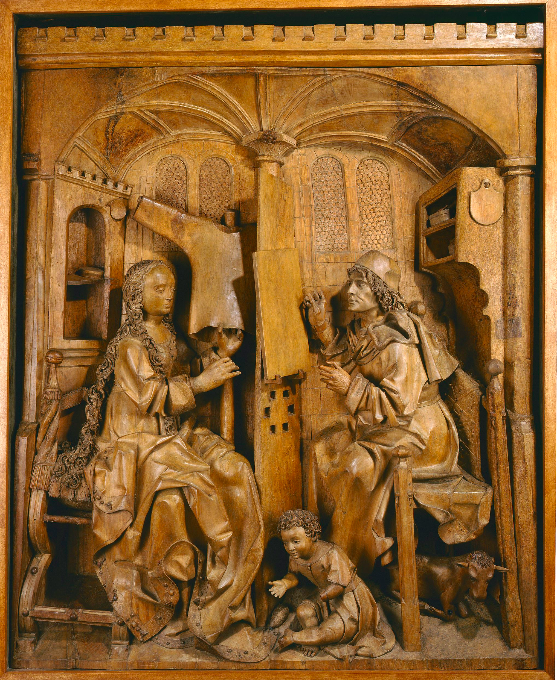 So why would the painter from Bouts’ workshop depict the Child that seems to be frightened and trying to escape his Mother’s arms? Well, I believe that it may refer to some particular depictions, quite popular in the 14th and 15th centuries. They were in fact small diptychs, combining images of Virgin with Child with the Man of Sorrows. 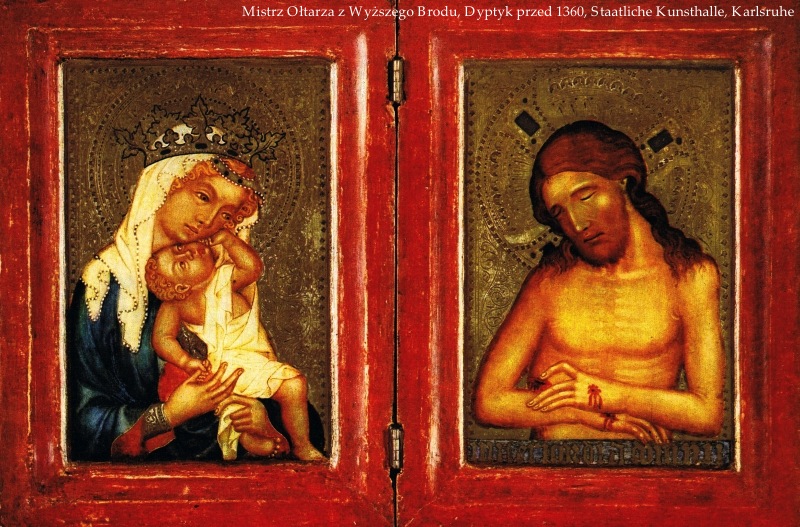 It was often assumed that both parts of such diptychs should be understood as referring to each other – and that is why the Child was depicted as terrified by the image of his future suffering. In those images little Jesus is scared and tries to escape his future. Scholars assume that the painting of Madonna on Grassy Bank by Master of Flémalle was originally a part of such a diptych; this assumption is based on the very characteristic pose of the Child in this painting. 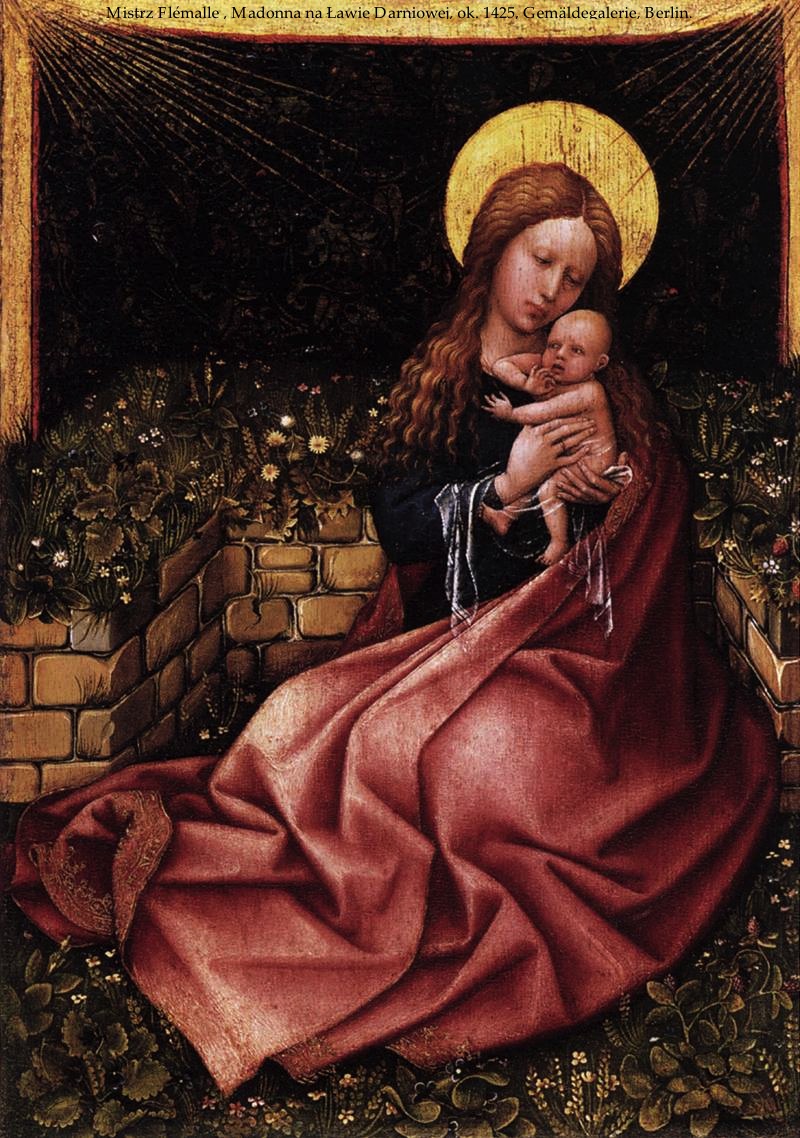 As a result we may speculate that the painting now in Bowes Museum was aimed to “promote” this particular type of devotional images, suggesting that they derived from the “true image” by St. Luke. Virgin here tries to distract her Child with a fruit, and that in fact refers to the Original Sin. So together we get the whole Salvation story: beginning with the sin committed by Adam and Eve, and ending in the Salvation completed with the future Passion of Christ. 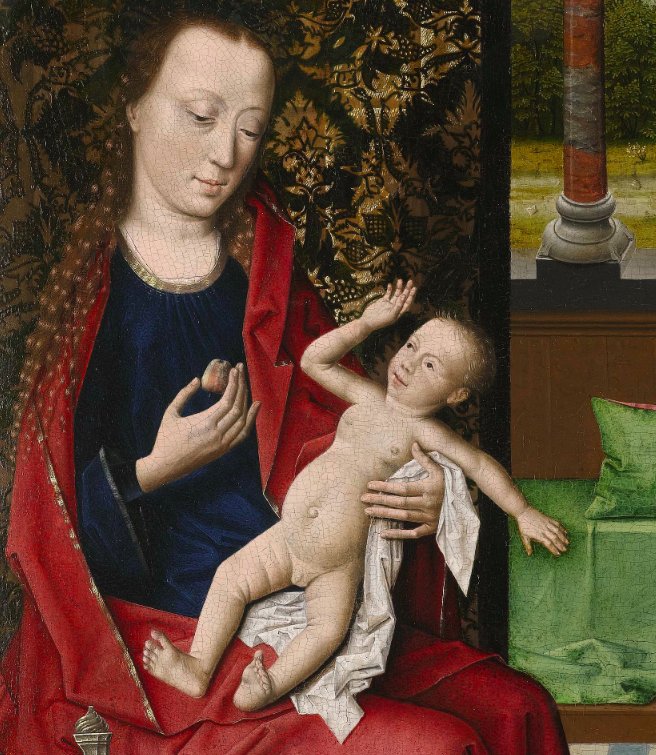 The painting acquired by the Bowes Museum is an interesting piece for me also because it seems a nice comparison for the “Annunciation” in Cracow (Czartoryski collection, National Museum). The Cracow painting is attributed to the circle of Dirk Bouts; look how similar the elements of the interior are in both paintings! The floor pattern is the same and the green cushions in the background also look very close in both pictures. I believe it is worth further research – and therefore I am happy that the St. Luke painting is not only available in the Bowes Museum but also is now being examined and studied after its recent acquisition. 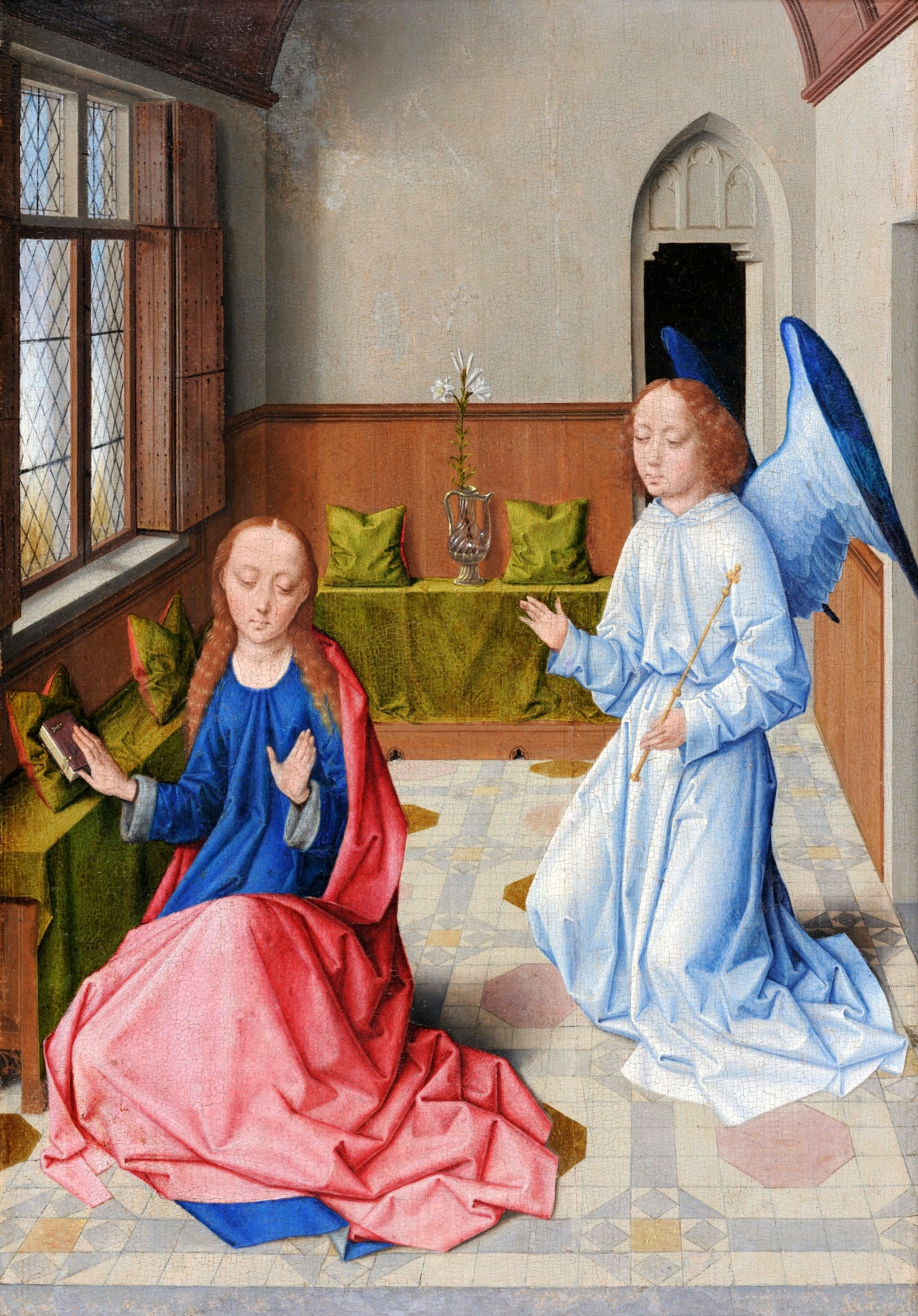 Have a look at a very nice short movie presenting the recent research on the painting in question: