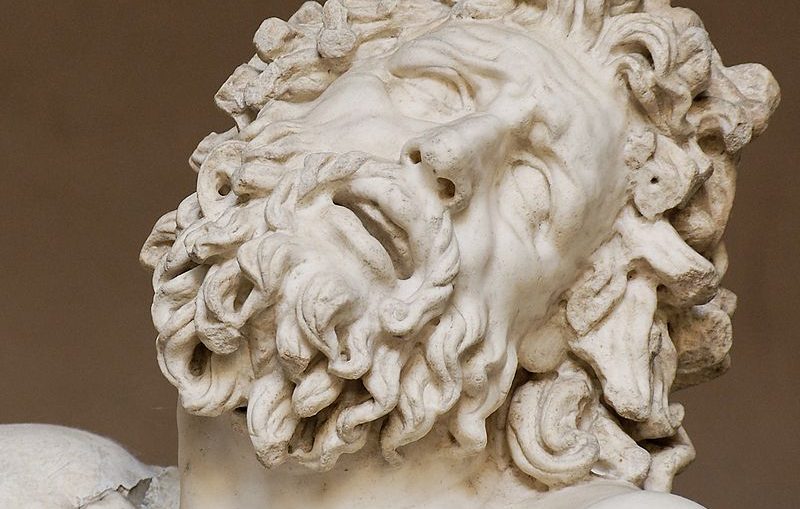 The Laocoön Group is one of the most famous ancient sculptures, depicting mythical Laocoön and his sons being killed by the snakes. The statue was discovered in Rome in 1506 – it was unearthed in the vineyard of certain Felice De Fredis. Immediately Giuliano da Sangallo was called to the site of the unearthing and he brought Michelangelo Buonarroti with him. They recognized the statue as the one described by the Roman writer Pliny the Elder: it was supposed to be created by the artists from Rhodes: Agesander, Polydorus, and Athenodorus. Pliny wrote that the sculpture decorated the palace of Emperor Titus. The discovered masterpiece was purchased by the Pope Julius II and today it is still in the Vatican Museums. 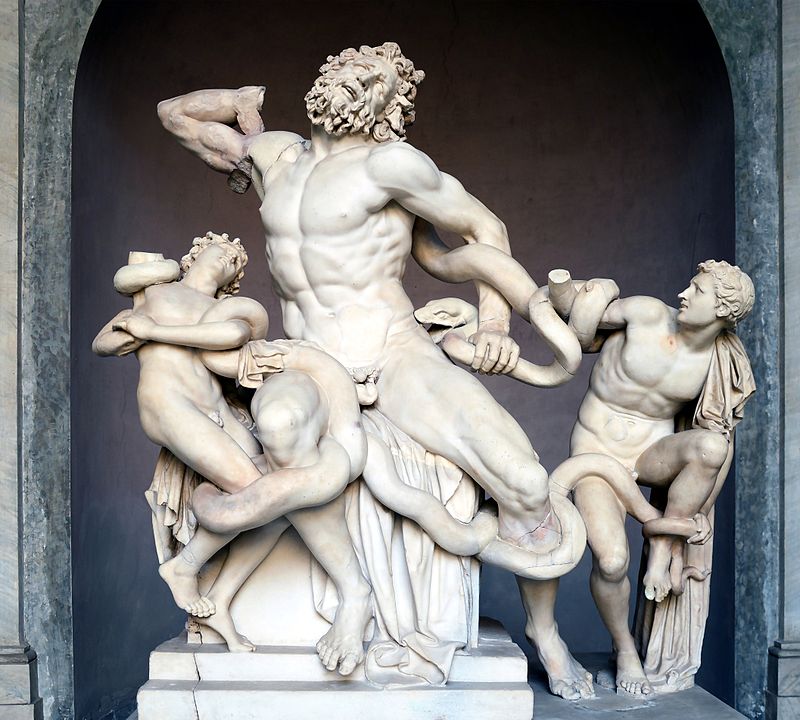 An American scholar Lynn Catterson has published and article on this sculpture in 2005; she claimed that the piece is in fact a forgery… created by Michelangelo! As she noticed, he would be able to complete such a piece and also he needed the money… well, we do know that young Buonarroti was good at copying ancient sculptures. In fact, his “Sleeping Cupid” (now lost) was sold by Baldassare del Milanese to Cardinal Riario as a genuine antique… but it was del Milanese’s fraud: he paid a little to Michelangelo and took quite lot of money from the deceived Cardinal for this sculpture. So that was not the forgery made deliberately by Michelangelo. And what about the Laocoön Group?

In her article Catterson stated that Laocoön’s discovery was “too good to be true” – it was almost in the perfect condition, which is weird in case of a piece that was supposed to be around 1500 years old. She also pointed out that Michelangelo bought a significant amount of marble around that time and finally she compared the Laocoön’s back to the drawing now in Ashmolean Museum in Oxford (Parker 292). According to Catterson this may be a design for Laocoön, although it match more-less only when mirrored… anyway, it was supposed to have been completed few years before the Laocoön’s discovery, so there you go. 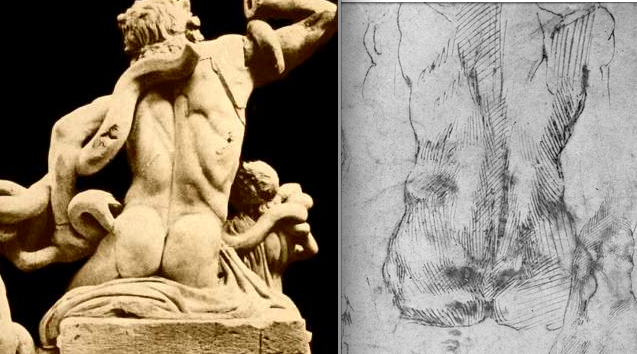 Catterson’s hypothesis was not accepted by the other scholars. They basically decided that her evidences are too circumstantial, and the drawing is not a match to the sculpture at all. Besides it is worth pointing out that the Laocoön Group is stylistically close to the other Hellenistic pieces, many of which have been discovered centuries after Michelangelo’s death. So how could he have completed something so close to them? 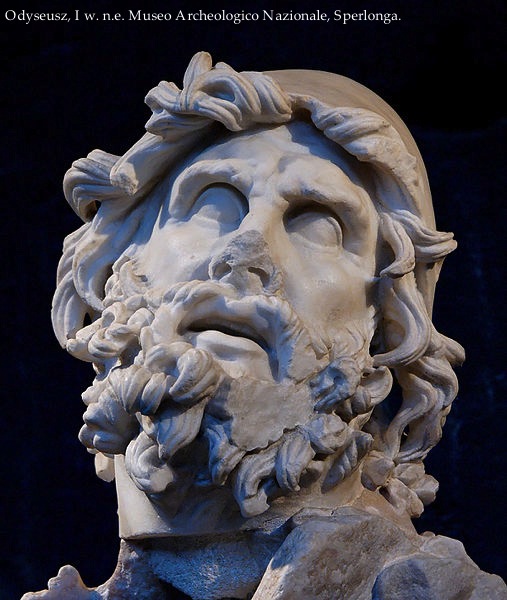 Of course there is a mystery behind the discovery of the Laocoön Group. According to Pliny the Elder this masterpiece was made of one piece of marble, while the one unearthed in 1506 is made of seven. Assuming that it is an ancient sculpture, we still don’t know whether it is a Greek original or a Roman copy. Its dating is most often assumed to be somewhere between the 1st century BC and the 1st century AD.

And there is one more issue: the discovered Laocoön was missing one hand and so were both of his sons. Of course the Pope wanted to have a complete statue, so the decision was made that the missing parts should be replaced. But what was the original composition? Almost everybody thought that Laocoön’s hand should be pointed up and that is how it was eventually reconstructed. Allegedly Michelangeo thought that the arm should be bent back over the shoulder. 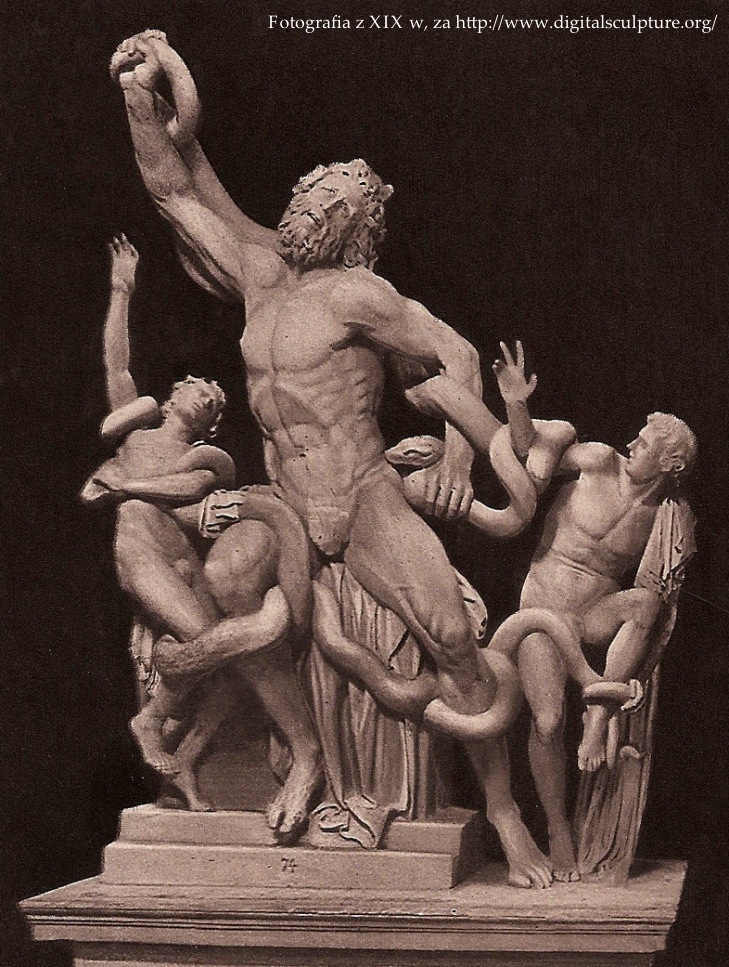 And now guess what happened almost 400 years later? The missing arm was discovered by Ludwig Pollak in 1905 and it turned out to be bent indeed! How-come Michelangelo knew that? Was it because he was the author of this sculpture? 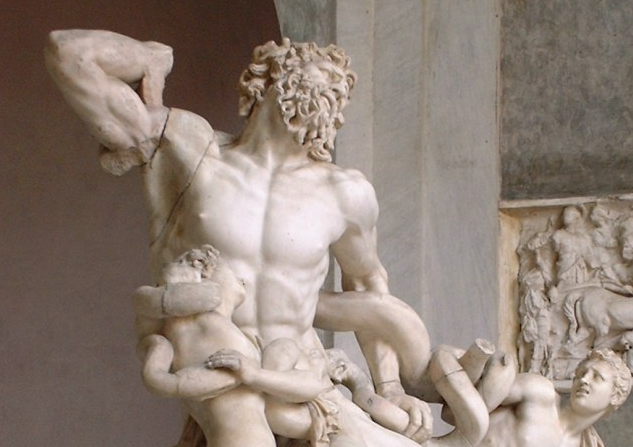 To be honest I rather find that an argument against the “forgery” theory. Apart from any discussions on stylistic matters, let’s ask ourselves: i sit really possible that the great Michelangelo would create a masterpiece and then denny its authorship? Would any money be worth rejecting the fame of being an author of SUCH a statue? And finally, would he allow the “missing” arm to remain “missing” while the reconstruction made by his contemporaries spoiled the original composition? I dare say that the hypothesis about the Michelangelo’s forgery in this case is simply psychologically unlikely. I am aware this is not a very scholarly argument, but then what is a blog for if not some personal speculation?

And what do you think about this whole issue?

Perhaps you would like to check out my previous post on Michelangelo (“Unfinished Michelangelo“) and also the issue of forgery was raised in a post on van Meegeren (“Original fake“). The cited above article by Lynn Catterson is: “Michelangelo’s ‘Laocoön?'”,  in: Artibus et historiae,  52 (2005), s. 29-56. I also recommend the Laocoön’s chronology available at http://www.digitalsculpture.org/laocoon/chronology/