the Lantern of the Dead

There is a very interesting monument by St Nicholas church in Cracow (Kopernika Street): it looks like a stone pole and many people pass by it not knowing what it actually is. In fact, it is a medieval Lantern of the Dead!

Previously there were holes at the top of this lantern (to place the lamp there), but they were later walled up. This particular lantern used to stay by the leper hospital and its St Valentine church at Długa street in Cracow, but that church was demolished at the beginning of the 19th century. We can today learn how it looked thanks to the painting by Teodor Baltazar Stachowicz (Historical Museum of the City of Cracow), which also depicts another church (Holy Cross Church), also not existing today. As you can see, our lantern is in the middle part of that picture; the lantern was removed to its present location in 1871. 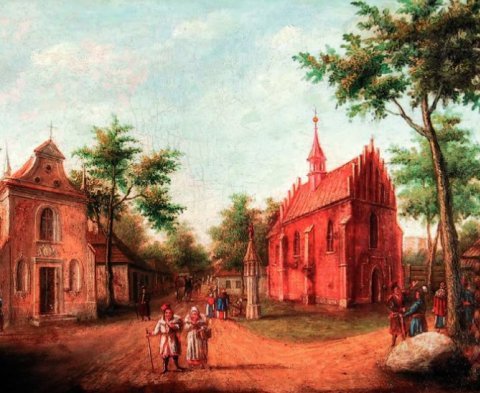 What was that actually: the Lantern of the Dead? Well, those lanterns mainly served as warning for the people traveling during night, marking graveyards and hospitals. In case of the leper hospital the danger is quite obvious: we don’t want to approach it because we don’t want to pick up the illness. But what was so dangerous about the cemeteries? Well, it was indeed better to avoid them during the night-time, and it was not because of the ghosts or zombies.

Almost all medieval churches were surrounded by the graveyards, so there were lots of them in the cities. But back then sacrum was mixed with profanum: pilgrims and beggars sometimes stayed overnight in the churches, and the graveyards were also full of life! There were vagrant preachers there, as well as sellers of the relics, moochers, poor people looking for alms, and of course various criminals. Those were the people you would not like to meet in the middle of the night, and so the Lantern of the Dead could have been a useful warning against them.

Moreover, it seems that the graveyards may have been the places of temptation! Among the sleazy people living in the cemeteries there were also women of dubious reputation. In 1749 Father Michael, the prior of the Dominican convent in Cracow, wrote that: “There is a servant woman at the tailor’s at the cemetery, who spoiled the monks, made them drunk and preserved them for couple of nights…”

The ladies of the graveyards probably not only “spoiled” the monks, but most likely, on the occasion of performing their services, emptied the pockets of various men. It seems that in some cases those graveyard lanterns should have been red… but then it may have been rather an advertisement than a warning.