Our Lady of the Baton 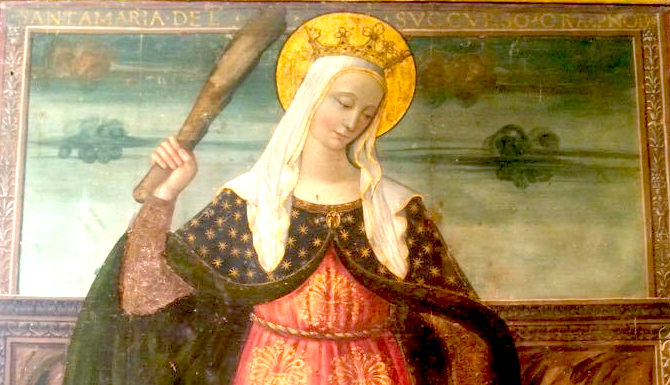 The exhibition “Maria Mater Misericordiae” (in the National Museum in Cracow) is almost finished. It collected various depictions of the Virgin Mary, portraying her in many different roles: as a tender mother, as a beautiful woman, as Co-Redemptrix suffering with her crucified son… and also we may find there some odd depictions, that I would like to call “Our Lady of the Baton”. 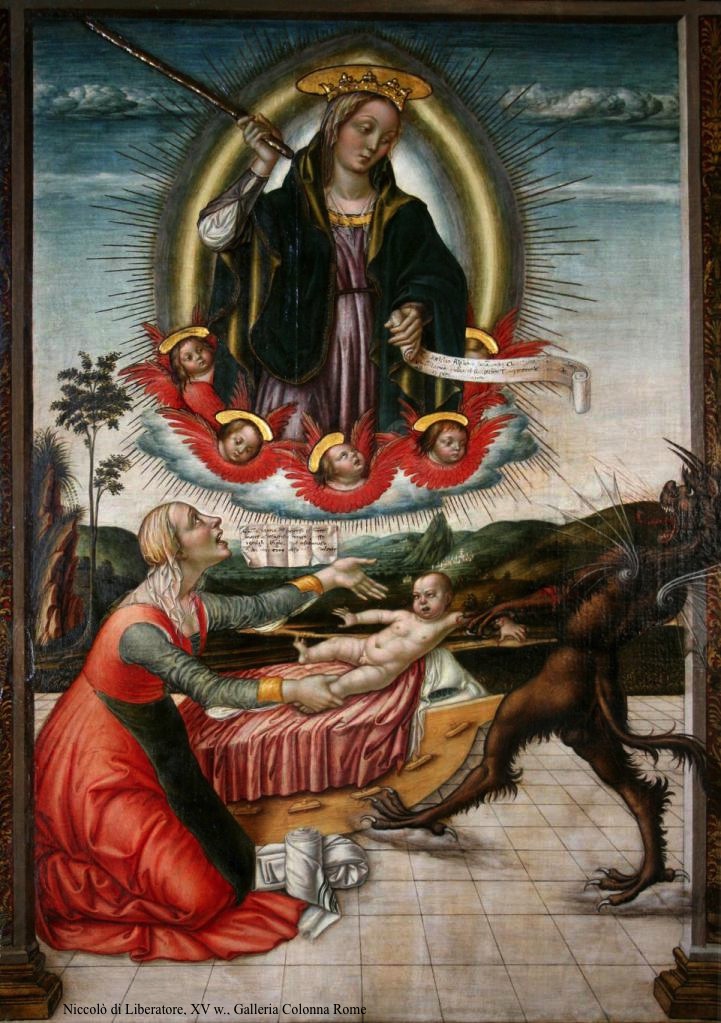 In fact it is a type called Madonna del Soccorso (Madonna of Perpetual Aid). It was popular mainly in Italy (Umbria, Marche, Tuscany) in the 15th and 16th centuries, and many depictions were related to the Augustinian churches. The images of the Virgin Mary beating the devil are obviously showing her as the protector, helping people to defeat the evil. 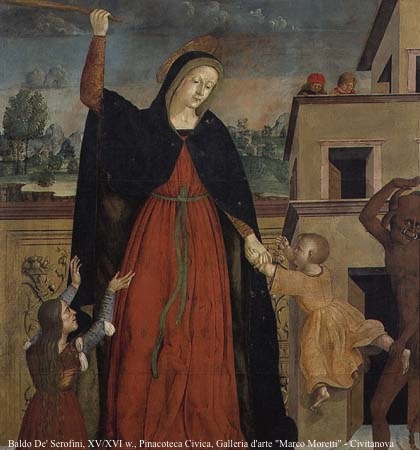 In fact those images usually illustrate a popular medieval story about a mother who dedicated her child to the devil. She did that in anger, as the child was misbehaving – we all know that every mother loses her temper from time to time. This one probably said something like: “to hell with you!” and unfortunately the devil took this chance and came to collect the baby. Of course the mother regretted her words: she wanted to save her child and sos he asked Virgin Mary for help. Naturally, Madonna chased away the devil. In the paintings she usually does that with a club or baton, but occasionally we may find a version with a whip. 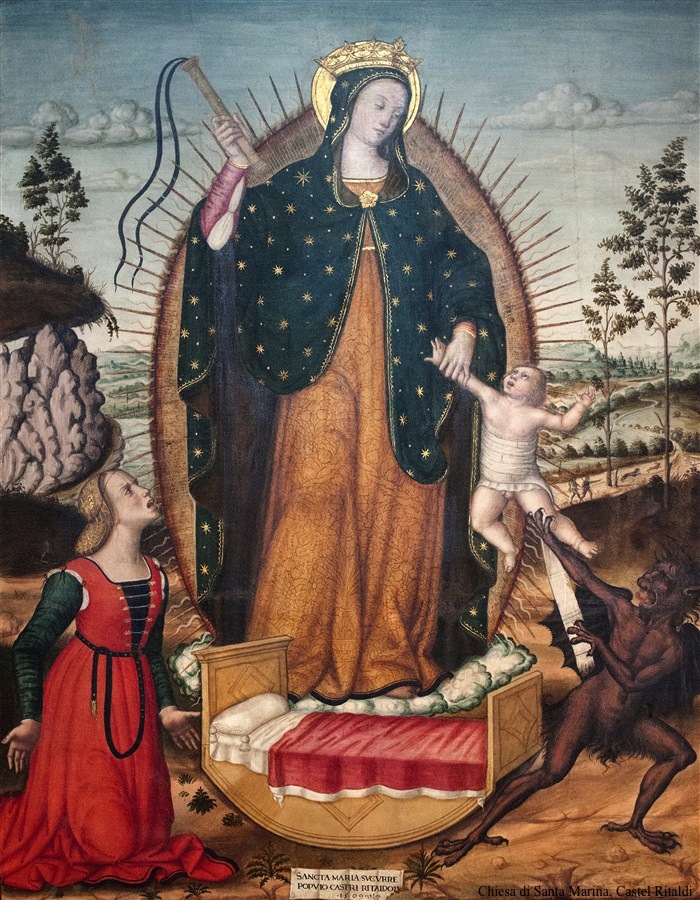 Some scholars relate that stories with the more general motif of “devil’s child”, present in medieval literature. It was a bit more complicated: the devil was entitled to take the boy not because his mother said something in ager, but because the boy was conceived in sinful circumstances. The legend was about a couple who vowed their chastity, but ended up having sex a day before Easter, that is by the end of the Lent. Apparently husband was the one who insisted on having sex; his wife told him: “if I conceive a child, may the devil take him!”. Of course, she did conceive. However, the devil was interested in getting an adult soul, so he planned to collect the boy when he is 15. At the age of 12 the boy learned about the curse and took a journey to Jerusalem, where he met a wise hermit. The hermit called out for the help of the Virgin, who immediately appeared and saved the child. That story was also repeated in various versions; one of the examples may be the text Miracles de Nostre Dame (Gautier de Coinci, 1177-1236). In the manuscript dating back to the 14th century we may find a beautiful miniature illustrating this story (Bibliothèque nationale de France, NAF 24541, 1328-1332, attributed to Jean Pucelle): 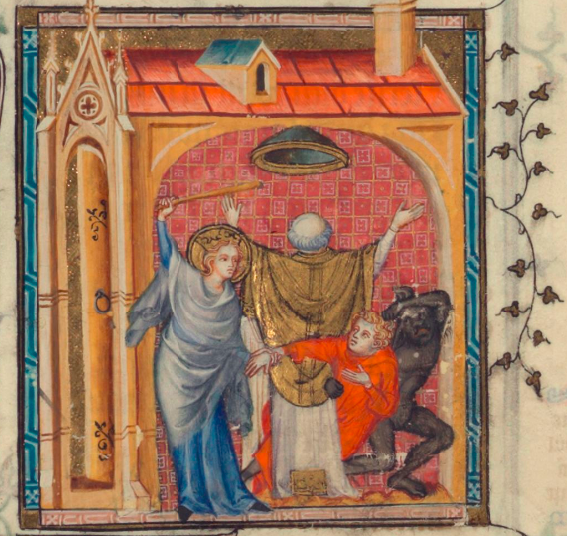 The cult of Virgin Mary and its outcome in the fine arts is a fascinating subject. Many legends, especially late-medieval ones, inspired artists to create rather curious images. Obviously the sinners knew that it is a good idea to ask Madonna for help: she was merciful and understanding, and apparently physically strong!

On the other hand, as October is coming, I may point out that during the the Communist Era in Poland there was a Day of Polish Citizen’s Militia, celebrated on October 7th. Militiamen liked to use their batons, so “Our Lady of the Baton” seems like a perfect patron saint for that occasion. 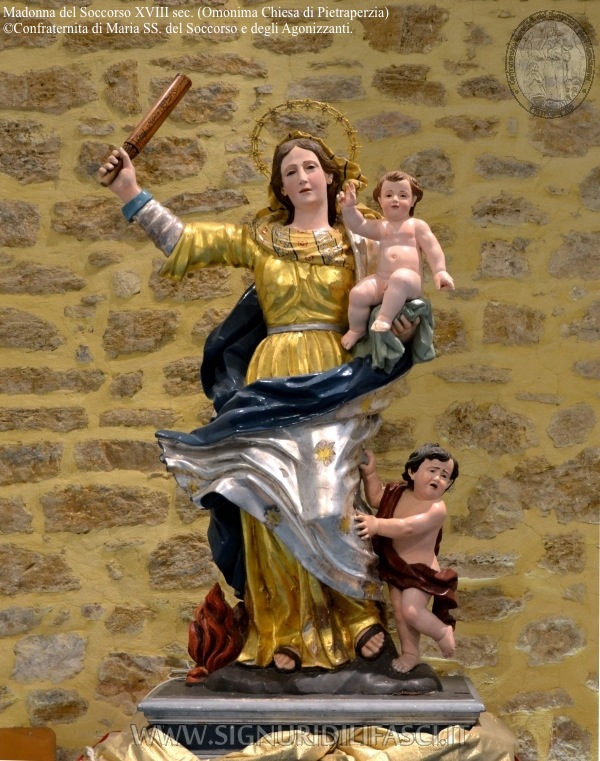