The sacrum of Moravia 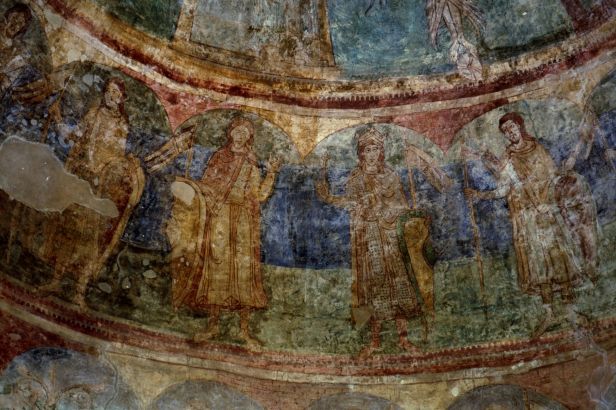 There is a beautiful town in Moravia, called Znojmo, and it is full of various monuments: there are gothic and baroque churches, a castle and many old houses. Znojmo gained its city rights in 1226, so it celebrates the 790th anniversary this year; the oldest monument in Znojmo is the Ducal Rotunda of the Virgin Mary and St Catherine – and that is what we want to discuss today. 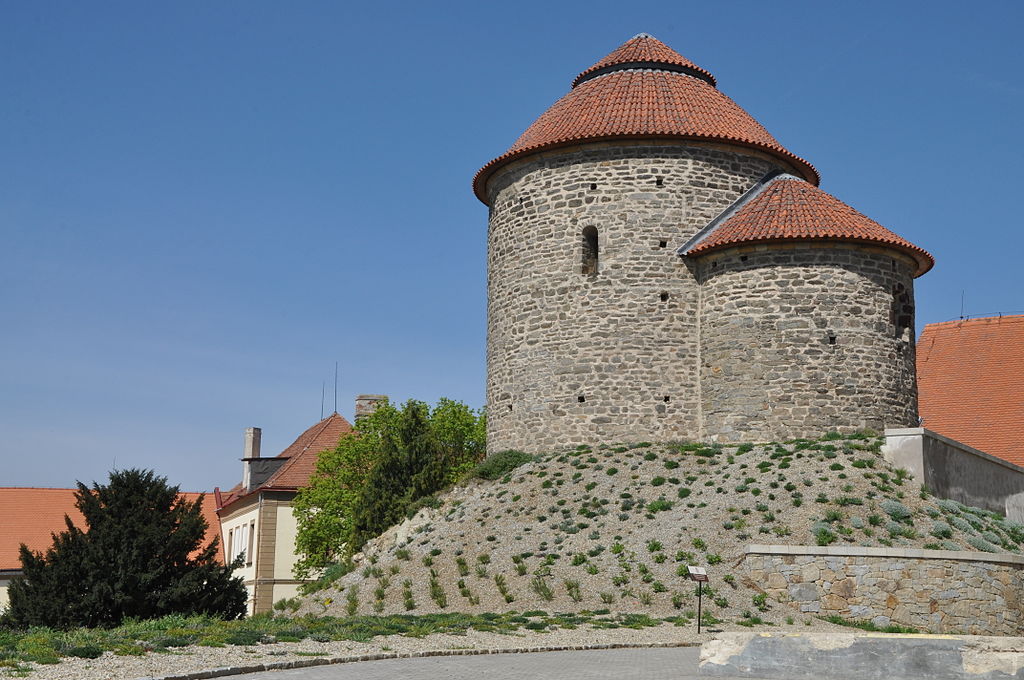 The rotunda was most likely the part of Znojmo castle from its very beginning; it may have been build before 1019, at the time of reign of Bretislaus I, Duke of Bohemia. The rotunda itself would not be so extraordinary if it wasn’t decorated with the romanesque murals that survived until today.

The frescoes inside the rotunda are usually dated according to the inscription discovered in the 1940s (the inscription is actually most likely from the 12th or the 13th century, but it probably repeats the older version). That inscription informs us that in 1134 duke Konrad II of Znojmo (of the Přemyslids dynasty) commissioned the images of the rulers and that by that time the rotunda was additionally dedicated to St. Catherine (as originally it was only Rotunda of the Virgin Mary). Konrad II of Znojmo may have done that on the occasion of his wedding with Mary of Serbia, which took place actually in 1134. 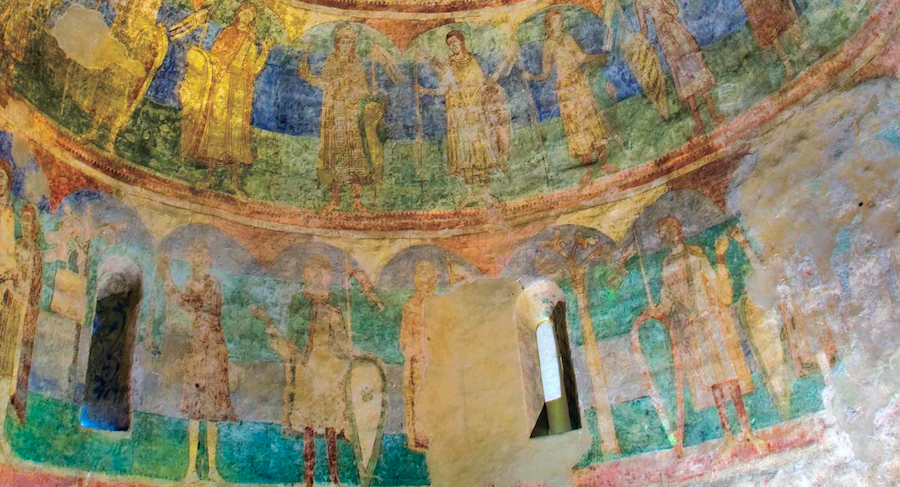 So let’s have a look at those frescoes – they are absolutely extraordinary! The rotunda was a part of the castle, but still it is a church; meanwhile, the whole decoration is mostly political! The middle part of the walls is taken not by the images of the saints, but by the portraits of the warriors-rulers.

There’s not much of the painting left in the apse; it used to be decorated with “Deesis” (Christ enthroned, accompanied by Virgin Mary and John the Baptist) and the images of the Apostles. In the dome one may see the Holy Spirit, the Evangelists and the Seraphs. 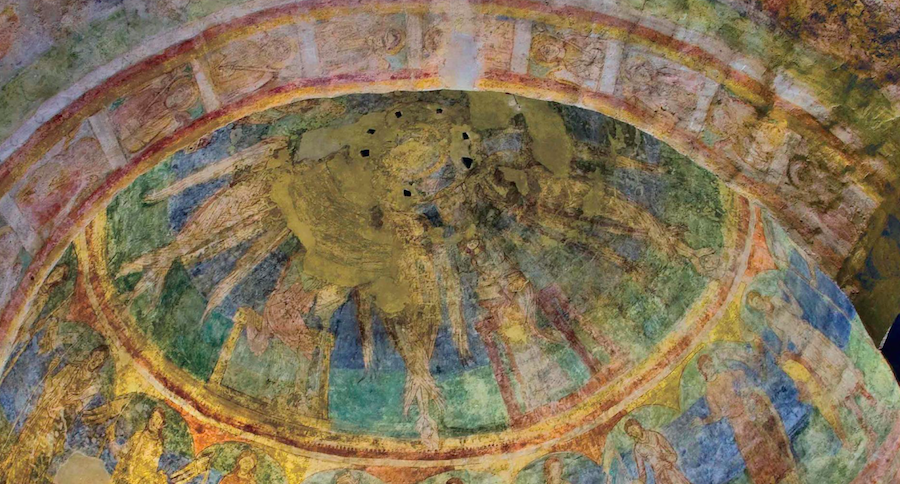 The lowest part of the walls is decorated with the trompe-d’oeil image of draped cloths. Above that we have a cycle of Christ’s childhood: the Annunciation, the Visitation, the Nativity, the Dream of St Joseph, the Adoration of the Shepherds, the Adoration of the Magi and finally the Flight to Egypt. The most interesting part is above that: there is a group of horse-riders, three men by the plough with a pair of oxes, and one more person in the back, holding some kind of wreath. Most of the scholars interpret this scene as the depiction of Přemysl the Ploughman, a legendary founder of the Přemyslids dynasty. He was chosen for a husband by the Queen of Prague, Libuše – the men riding horses would be her legation. Interestingly, those men, possibly announcing Queen’s will, are depicted above the scenes of Annunciation and Visitation, while the image of Přemysl ploughing is related to the depictions of the Nativity and Adoration of the Shepherds. The Lord is presented at first to the shepherds, and then to the kings; just as the power of the Přemyslids dynasty begins by the plough and ends up on the royal throne. Later we get the set of portraits of the rulers from the Přemyslids dynasty. 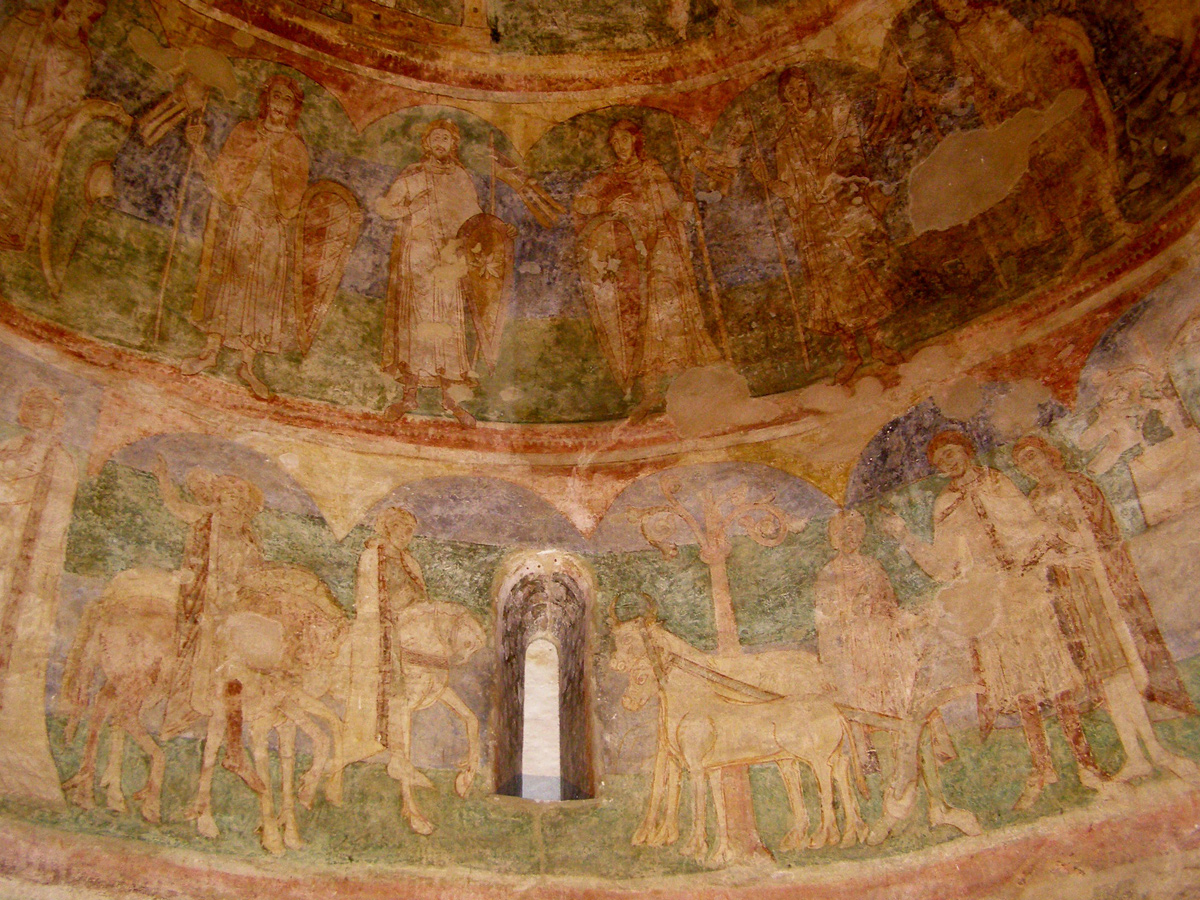 Finally, in the middle of the rotunda, on both sides of the apse, there are two donors: a man holding a church model and a woman holding a chalice. Most of the scholars assume that these are Konrad II of Znojmo and his wife, Mary of Serbia. 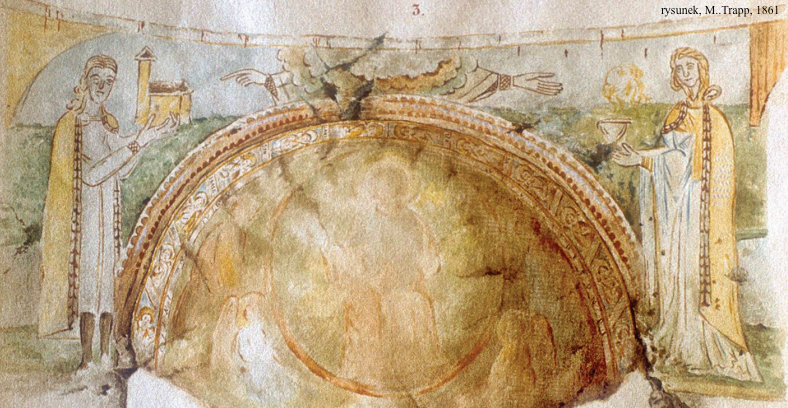 However, there are also alternative proposals about the meaning of the frescoes in the rotunda of Znojmo. Perhaps they do not refer to the Přemyslids dynasty of Prague, but rather deal with the local history of Moravia. In such case the main hero would not be Přemysl the Ploughman, but rather Rastislav of the House of Mojmír, ruler of the Great Moravia from 846 to 870. He would be depicted by the plough along with Saints Cyril and Methodius, whom he brought to his country. The previous scene with the horsemen would in that case depict the beginning of the mission of those saints. The additional figure holding a wreath (or a crown with ribbons?) would be a personification of the Czech country, paying homage to Rastislav. In that case the rulers depicted in the following parts of the walls would not be all of the Přemyslids dynasty, but rather of Moravia from the House of Mojmír, followed by some Přemyslids (but only the ones who also ruled Moravia). According to that theory the pair of donors would also be Rastislav and his wife: holding church and chalice, symbolising bringing christianity to their lands. The whole decoration would in that case refer to the glory of Moravian history and culture, stressing the importance of the mission of Saints Cyril and Methodius.

In any case, the frescoes of the rotunda in Znojmo are absolutely extraordinary. Not only because they are romanesque; most important is that they represent unique iconographical program, focused on political issues. The heroes of those paintings are not the saints, but the rulers: the legendary Ploughman (no matter if Přemysl or Rastislav) and his followers are depicted above the scenes of the life of Christ! Would it be possible in Poland? Could there have been such a decoration in the romanesque rotunda of Wawel Castle in Cracow – perhaps depicting Piast the Wheelwright, the legendary founder of the Polish Piast dynasty? Or perhaps such an approach is possible only in Moravia: the sunny land full of vineyards? I have a feeling that people here are more pragmatic, but also more cheerful; it seems that they prefer appreciating their history rather than falling to their knees.

The alternative theories about the frescoes’ iconography are discussed at the website: http://www.moraviamagna.cz/historie/index.htm, in Czech only. There is also an English article available, on the latest results of the renovation of those murals: Kateřina Dvořáková: Dating the Romanesque Mural Paintings and the Ducal Rotunda of St. Catherine, in Znojmo: New Discoveries (2010).