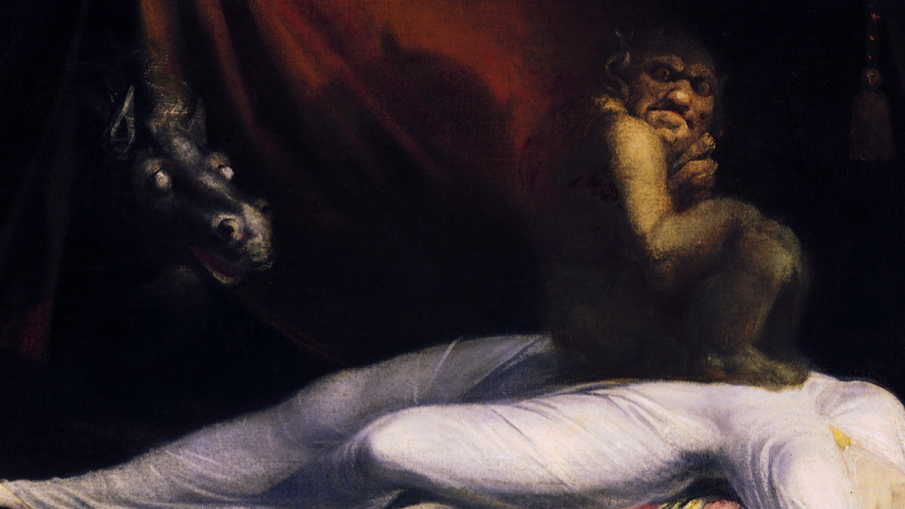 Perhaps it is a point of view of a medievalist, but I always thought most people associate “Gothic” with the Middle Ages. Today however, we will focus on a phenomenon characteristic for the British culture of the late 18th and the early 19th century. That was the time of popularity of so called “Gothic fiction” – the term comes from the subtitle of the novel by Horace Walpole, “The Castle of Otranto” (1764, subtitled “A Gothic Story” in its second edition). It was a strange mixture of romance and horror, and interestingly some of those terrifying stories were written by women; the most famous would be “Frenkenstein” by Mary Shelley (1818). Of course that taste for fantastic and supernatural themes was not present only in the literature; we can find some interesting examples also in the fine arts of the time. One of the best known would be The Nightmare by Anglo-Swiss artist Henry Fuseli (1741–1825), created in 1781.

The painting was exhibited in the Royal Academy in 1782 and it immediately shocked the audience. It is a disturbing vision of a nightmare, featuring sleeping woman who seems to faint, or even perhaps die in quite a theatrical pose. There is a small monster sitting on her chest – it is a demon that torments sleeping people. Those demons were supposed to be particularly keen on coming to those who slept alone; according to the ancient legends, men were visited by the succubi, while the women were troubled by incubi. They were sexual demons, assaulting their sleeping victims; actually, Lilith (the first wife of Adam) is said to have become a succubus (I wrote about Lilith once, the post is available HERE). The night fantasies and erotic dreams were supposed to be the results of the actions of those demons; in case of women it was really dangerous, as the visit of an incubus may have ended up even with an unexpected pregnancy. 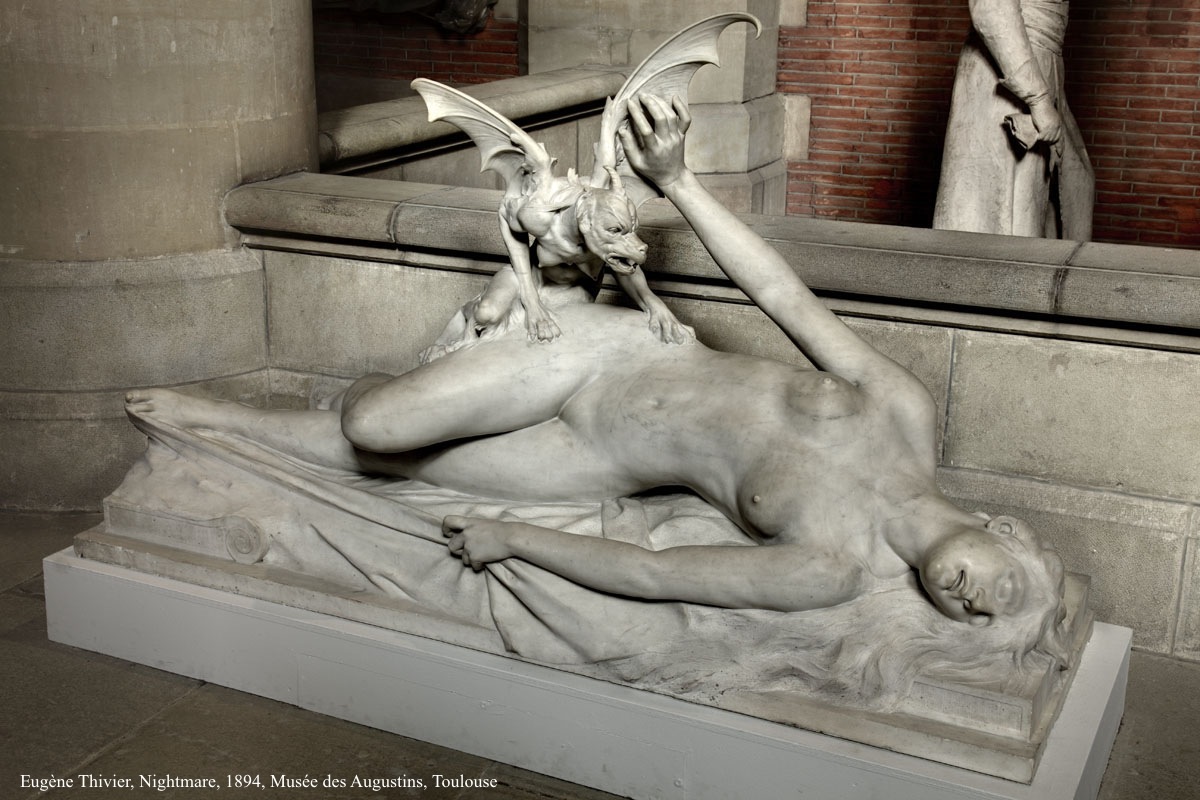 On the other hand, it was also believed that some sleeping disorders were caused by the demon sitting on one’s chest; it is likely that it was an explanation for a condition now called a sleep paralysis. 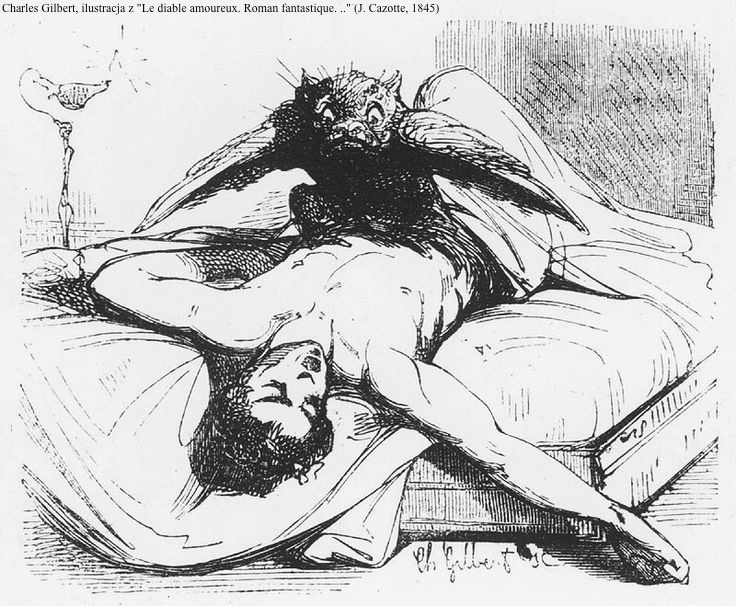 There is another scaring element in the Fuseli’s painting apart from the incubus: it is a crazy horse looking at the sleeping lady. It may refer to the word “mare”, although there is no actual reference to the horse in the word”nightmare”. The etymology of the term in fact refers to the word “mara”, which is a mythological term describing a spirit tormenting sleepers, which most likely derives from the Scandinavian culture. It is, however, present in various European languages, also in the Slavic ones (Polish “mara” and “zmora”).

The painting was so popular that Fusely created at least three further versions; it was also reproduced in the forms of graphics. Apparently, one print was also owned by Zygmunt Freud.

And of course the painting became a source of inspiration for various satiric images, especially political and social ones, mainly due to the situation in France by the end of the 18th century. 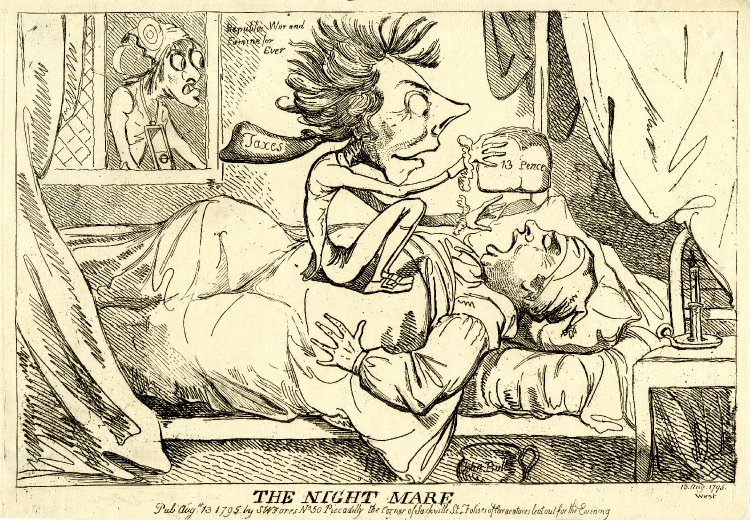 There were actually also the French versions, for example this one, anonymous, dated 1818: 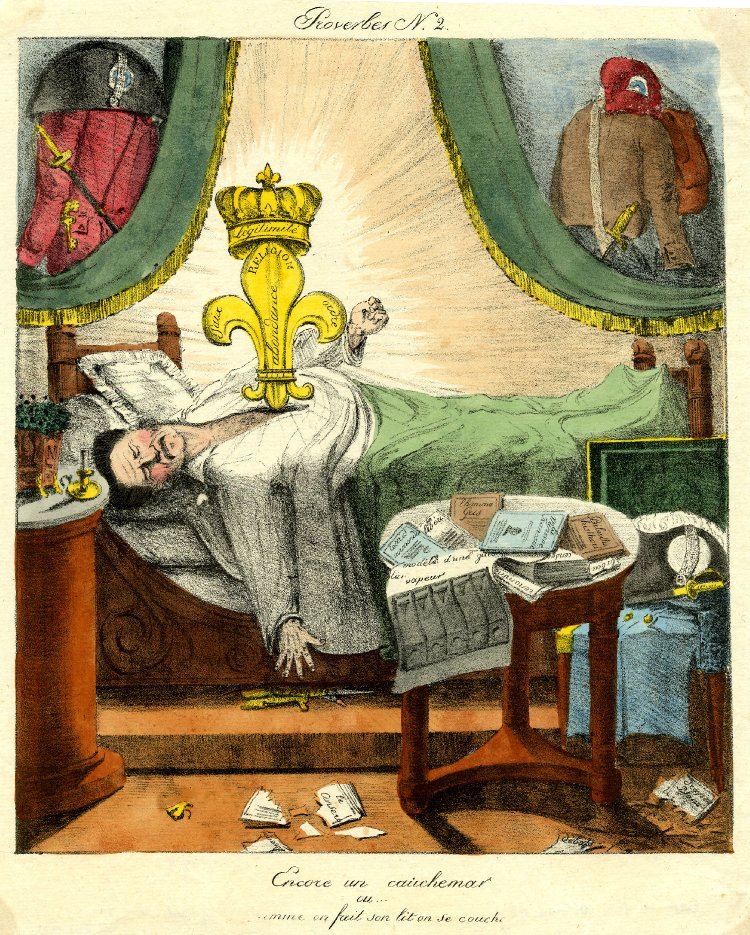 On the other hand, in Great Britain the caricature may have been more personal: like in the print by James Gillray (1799). It depicts a nightmare of George, the Prince of Wales (1762–1830) who is visited by the ghost of William Augustus, Duke of York (1721–1765). Both gentlemen were famous for their gluttony: the dead Duke apparently came to warn the Prince that such a way of life may lead to death. 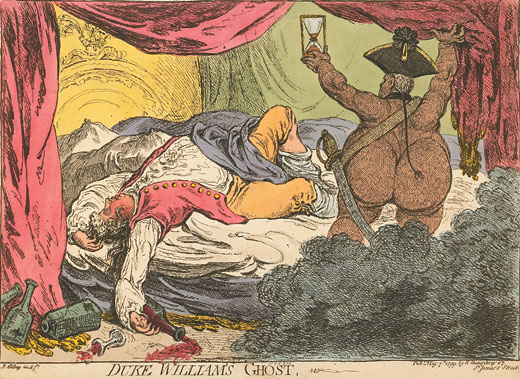 Actually it should be noted that nightmares are often caused by the problems with digestion! Drinking and an excessive diet may lead to night sensations, which is a subject of another satirical print, depicting Fatal Effects of Gluttony (1830): 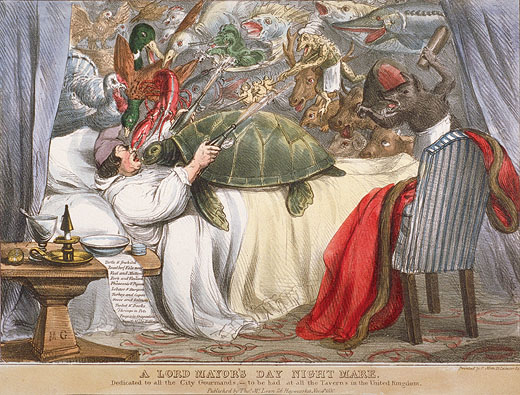 So the conclusion is simple: first of all we should not eat to much before we go to sleep, and second of all – we should avoid sleeping alone, as it attracts the demons. It is much more pleasant to share the bed with somebody, and so we should sleep well when we are together. Unless the other person snores.