Home » Blog » Forgotten master in one of the Cracow collections
Thu03

Forgotten master in one of the Cracow collections 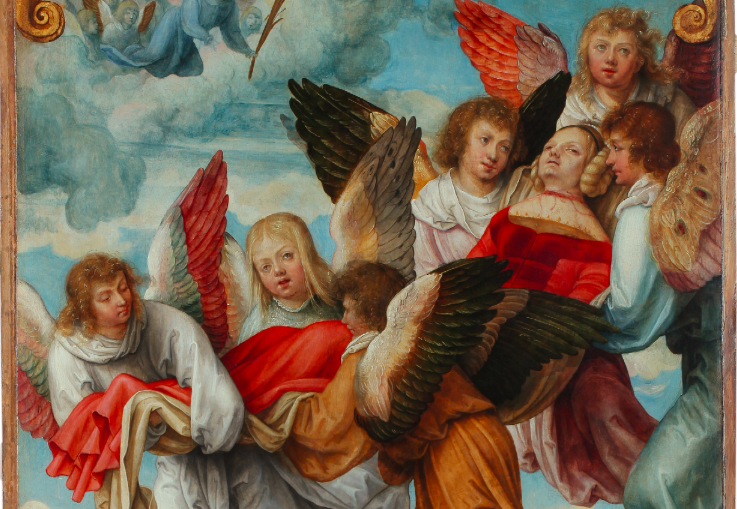 Sometimes we tend to forget even the great artists – even here, although there are not so many famous names in the Polish collections. At one point it had even been forgotten that the main altar in St Mary’s Church in Cracow was created by Veit Stoss; in 1824 the authorship was re-discovered by Ambroży Grabowski! Now another masterpiece from the same church has just been renovated, so it is a good opportunity to bring up a name of the artist who seems to be not commonly recognised anymore: that is Hans Suess of Kulmbach. And the work of art in question is a set of the panels depicting the Legend of St Catherine. 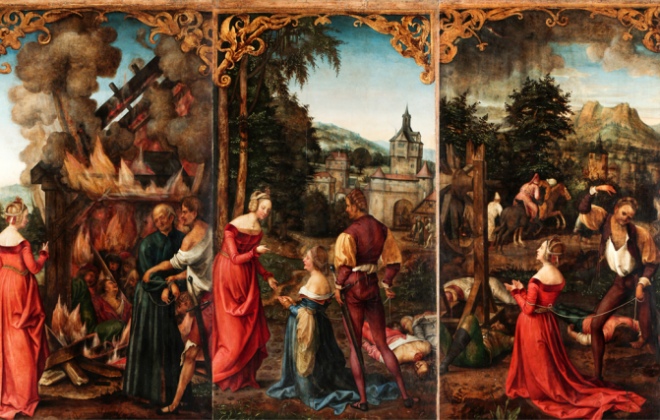 Hans Suess of Kulmbach studied in Nuremberg, at first, at the end of the 15th century, in the workshop of Michael Wolgemut, and later – after 1500 – in the workshop of Albrecht Dürer. That means that Hans Suess represents so called Northern Renaissance; he was actually a very good and appreciated artist: painter, draughtsman, illuminator and stain-glass designer. He completed many jobs out of Nuremberg, including some commissions in Cracow. The panels in question were created between 1514 and 1515, most probably as the parts of a retable for the chapel of Jan Boner. That Boner was a man of success (after all, not everyone can afford a chapel in Our Lady Church in Cracow!): a merchant, a banker, an administrative official and a manager of Salt Mine in Wieliczka, as well as a councillor. At the end he managed to get a coat of arms and became a noble man, obviously. Such a person could not have commissioned anything in a local workshop – and Nuremberg was apparently quite a popular place to search for the artists to complete a prestigious work of art. Unfortunately, the altars completed by Hans Suess to the churches and chapels in Cracow did not survive, but divided into parts got scattered. For example, there is a panel in Czartoryski Museum in Cracow that used to be a part of a retable founded by Stanisław Jarocki in 1511 to the St Stanislaus church at Skałka – it is also a depiction of St Catherine, formerly in full figure but now cut down to the oval half-figure image. 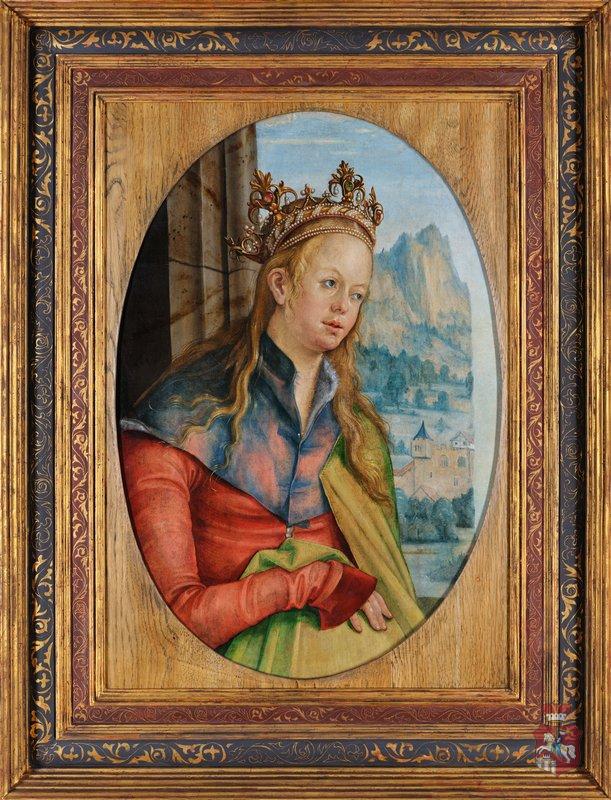 The panels from St Mary’s Church also have an interesting history. They come from a retable that also had been deconstructed and those panels even at one point ended up as a decoration set in the doors of a sacristy closet! At the turn of the 19th and 20th centuries they were enovated in Munich and on 5th February 1940 they were stolen in a carefully planned action of the German occupants and taken away to Germany. The Nazis had some very well-trained art historians who knew excactly what was worth taking. After the World War II only six of previously eight panels were recovered – we still don’t know what happened to the missing two. Interestingly, those two missing panels happen to be the best ones of the whole set. Perhaps someone still keeps them in the attic and one day they will show up at some art auction?

The Legend of St Catherine cycle from Cracow is not only a masterpiece of a high artistic quality, but also contains scenes that were not very common in the other cycles of that saint. Let’s have a look at the panels painted by Hans Suess of Kulmbach. 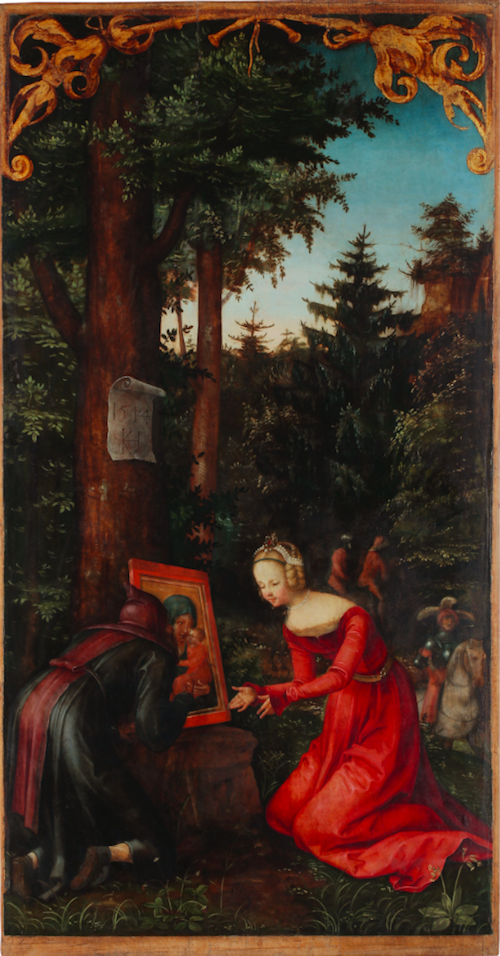 The first scene is a Conversion of St Catherine. Catherine of Alexandria (3rd century AD) was supposed to have been a daughter of a king (either king of Cyprus or of Alexandria, depending on the version of a legend). She was smart, good and beautiful, so she wanted to find a perfect husband, which is quite a challenging task. Finally, the hermit Adrian showed her a depiction of Virgin Mary as a perfect mother-in-law. That is a wonderful scene for an art historian: the conversion is a result of a fascination with a painting! The hermit convinced Catherine that the perfect husband would be Virgin Mary’s son, Jesus; he also taught her about christianity and finally baptised her. As a result, Jesus indeed occurred to her and she was mystically married to Christ. The sheet of paper painted as nailed to the tree contains the date 1514 and a monogram of the artist. 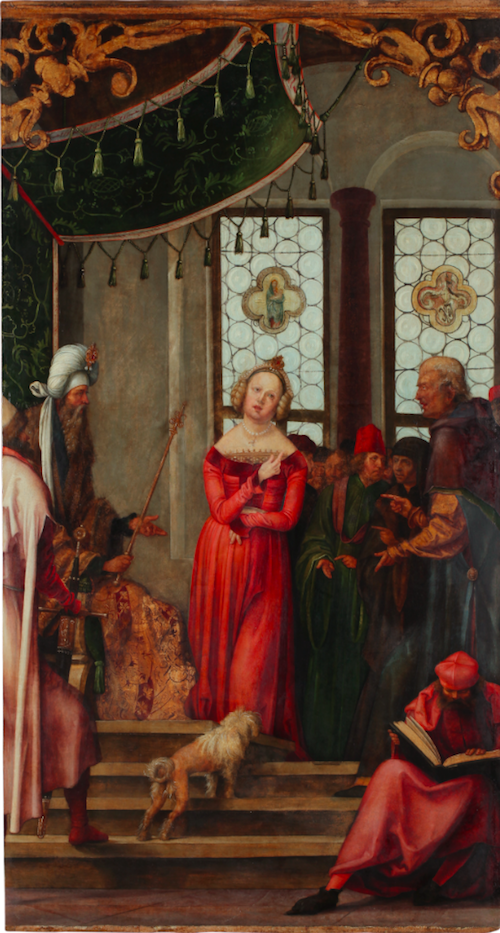 The second panel shows the discussion between St Catherine and the pagan philosophers. There are two stain-glasses depicted in the windows in the background of the scene: one with the image of Virgin with Child and the other with the coat of arms newly acquired by Jan Boner, the donor. According to St Catherine’s legend, the emperor organised the discussion when Catherine refused to worship Roman gods; unfortunately fifty philosophers not only did not manage to convince Catherine to change her mind, but also a large group of them converted to the christianity themselves. Of course as a result they were martyred by being burned alive; St Catherine comforted them and promised they will achieve a salvation of their souls (although they did not have a chance to get baptised before their death). That is a scene depicted in the next panel. 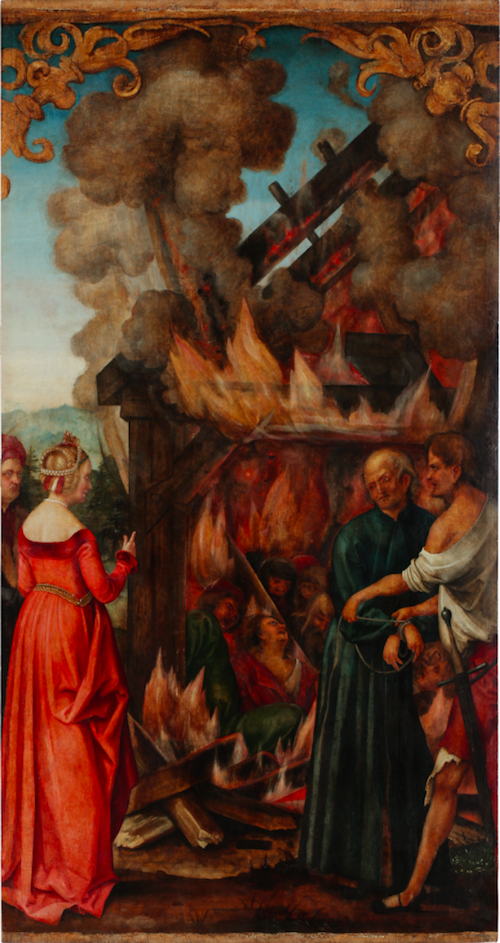 Of course St Catherine herself was also tortured – a fourth panel shows flagellation of the saint. She was meant to be martyred with a breaking wheel, but miraculously the wheel broke itself: 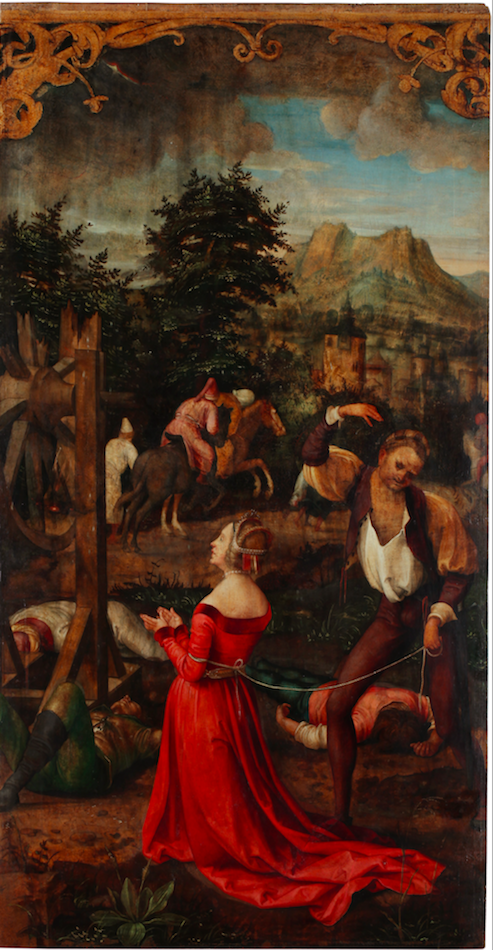 Another two scenes are related to the fact that St Catherine also converted Emperor’s wife and a commander Porphyrius. The panel depicting imprisoned St Catherine talking to Empress and Porphyrius was one of the best in the whole cycle – unfortunately that is one of the two that are missing since 1940. The other missing panel is Beheading of St Catherine. 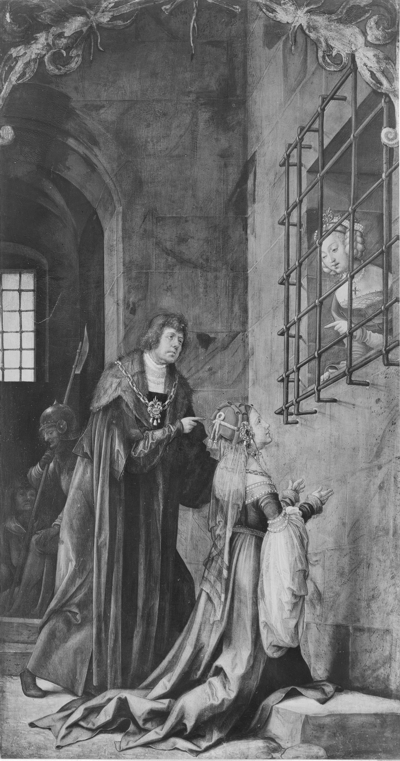 Of course when the Empress became Christian, she was also sentenced to death – a moment before her execution is depicted in the next panel: 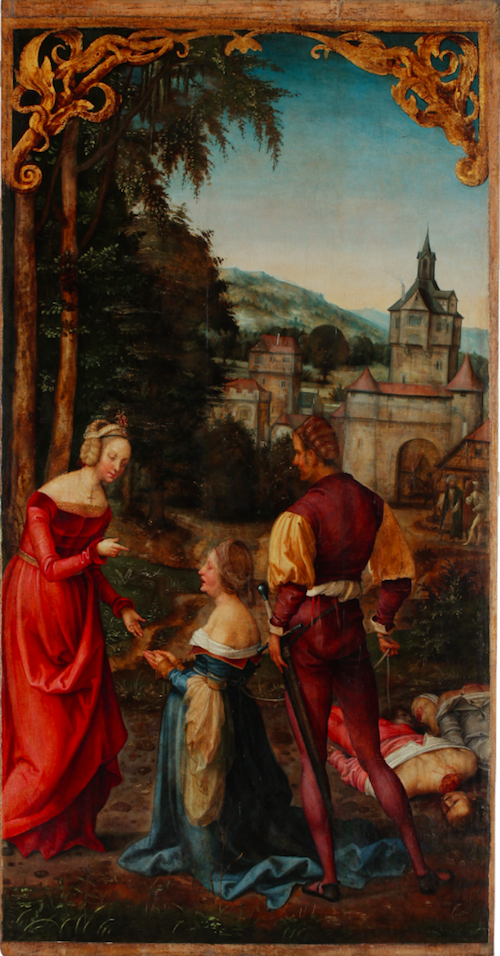 And finally the last panel contains the image of the angels taking away Catherine’s body after her execution. That painting, as well as the first one in the cycle, contains an inscription with a date (this time it is 1515) and an artist’s monogram; interestingly, some of the text of that inscription has been removed at some point, most likely to hide the fact that the author came from Nuremberg. According to dr Aleksandra Hola, who completed the recent restoration of the panels, the inscription used to read: „HANC DIVE VIRGINIS CATHERINAE / HISTORIAM IOHANNES / [Suess Norember]GENSIS / CIVIS FACIEBAT ANNO DNI 1515 / HK” According to the legend, the body of St Catherine taken by the angels was placed at the top of a mountain (today called St Catherine’s Mountain) in Sinai, where eventually the Monastery of St Catherine was established. Built in the 6th century, it is now one of the oldest working Christian monasteries in the world, supposed to have been founded in the spot where God appeared to Moses in a form of a burning bush. It is also close to the Sinai Mountain, where Moses was given the 10 Commandments. The body of St Catherine was “discovered” here in the 10th century, which resulted with an inflow of the pilgrims. Catherine was a wise woman and Christians that venerated her also proved to have wisdom: they have build a small mosque in the monastery (probably for the Bedouins that worked there), so the Muslims rarely attacked it. In contrary to the common beliefs, early Middle Ages was quite a sensible era – at least they knew how to deal with religious and political challenges. 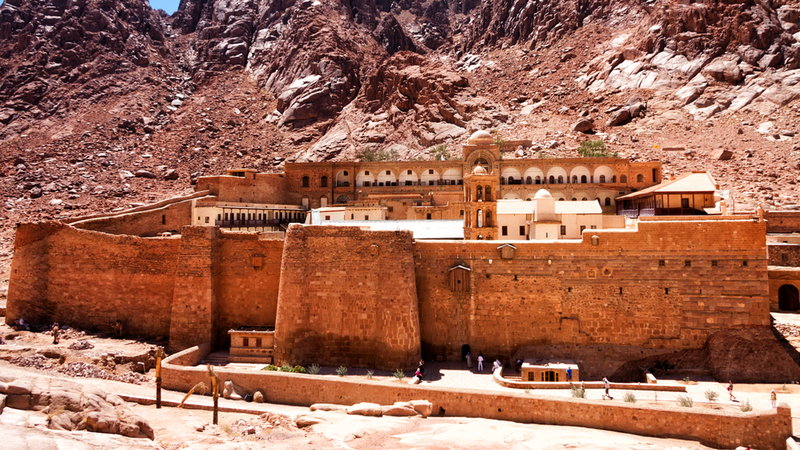 And if you would like to learn what challenges were dealed with by the restorers of the Cracow panels, I invite you to watch a movie created by Tygodnik Powszechny:

© The owner of the panels is the St Mary’s Church in Cracow. The photographs of the 6 survived panels were taken by Paweł Gąsior.

Having read some great articles recently published in the catalogue of an exhibition “The Master and Catherine. Hans von Kulmbach and his works for Cracow” I am now adding explanations correcting some mistakes that appeared in the post above. First of all, it should be stressed that in case of the Cracow works by Hans von Kulmbach we do not have any written sources that would support hypothesis on the original locations of those altarpieces. Any propositions on the original forms of the altarpieces or on identification of their donors are in fact speculative. Most important is that the scholars now reject older hypothesis about the image of St Barbara from Czartoryski collection, which used to be described as being funded by Stanisław Jarocki for the St Stanislaus church at Skałka in Cracow. Also, it is not certain whether Hans von Kulmbach worked in Cracow at all (there’s no proof of his presence there) or whether he just completed the commissions for Cracow churches in his workshop in Nuremberg and shipped the paintings to Cracow.

Another information worth correcting is a timeline of war history of the St Catherine’s panels. They have been confiscated in 1940 but in fact they remained in Cracow until 1944, when German government decided to evacuate possessions due to the fact that the Red Army has been approaching. All the Hans Süss’ paintings have been taken to Lower Silesia and subsequently 6 of them were further sent to Bavaria. Those 6 were lated recovered, and no-one knows what happened to the missing two, which – as it seems – got lost on the way, in Silesia.