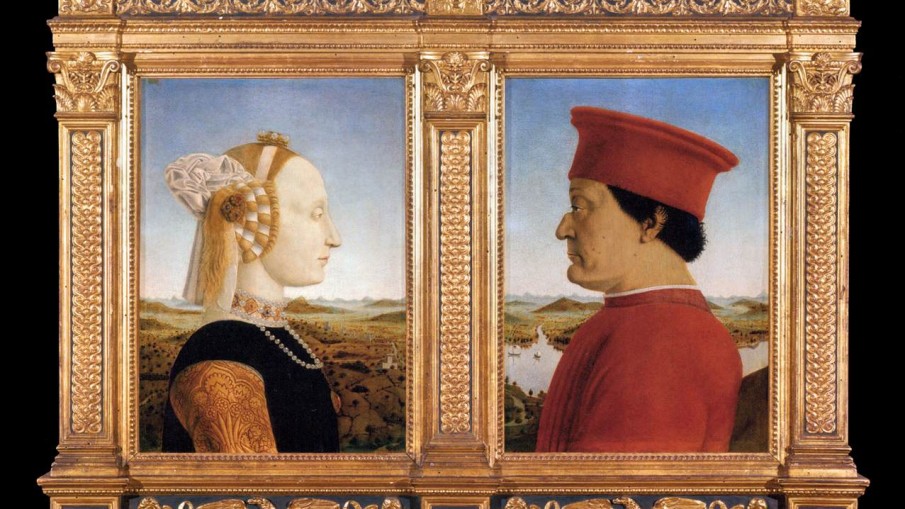 Sunny Italy is a country that we associate with beauty – not only because of its landscapes, but mostly because of its art. Beautiful people have been painted here for centuries usually in the paintings and sculptures founded by rich donors, of whom we also tend to think as of bold and beautiful. Today I would like to focus on the Duke of Urbino: certainly bold, but not necessarily handsome. We can see him in the portrait with his little son, showing both in their splendor – he is depicted as a warrior, a scholar and a connoisseur of art. The painting is probably by Pedro Berruguete (attribution uncertain, 1480-81):

Federico da Montefeltro (1422-1482) was certainly an extraordinary person. He was a famous condottiero (the leader of the professional military free company), and Papal Gonfalonier (military and political official of the Papal States). Federico was born as an illegitimate son of Duke Guidantonio da Montefeltro, lord of Urbino. The latter apparently had a very understanding wife, as she let the Pope Martin V (who was also her uncle) to legitimize Federico as a member of Montefeltro family. After Guidantonio’s death his throne was taken by his legitimate son, Oddantonio, who was 16 at that moment (in 1443). Unfortunately the teenage Duke was not a very responsible ruler and quickly managed to spent most of the money from Urbino’s vaults. After one year of governing Oddantonio was assassinated in a conspiracy; Federico’s probable participation in the plot has never been established, however it seems possible. In the central part of the Montefeltro altarpiece we can see Federico as a pious donor kneeling in front of Madonna with Child (by Piero della Francesca, ca. 1472-74): 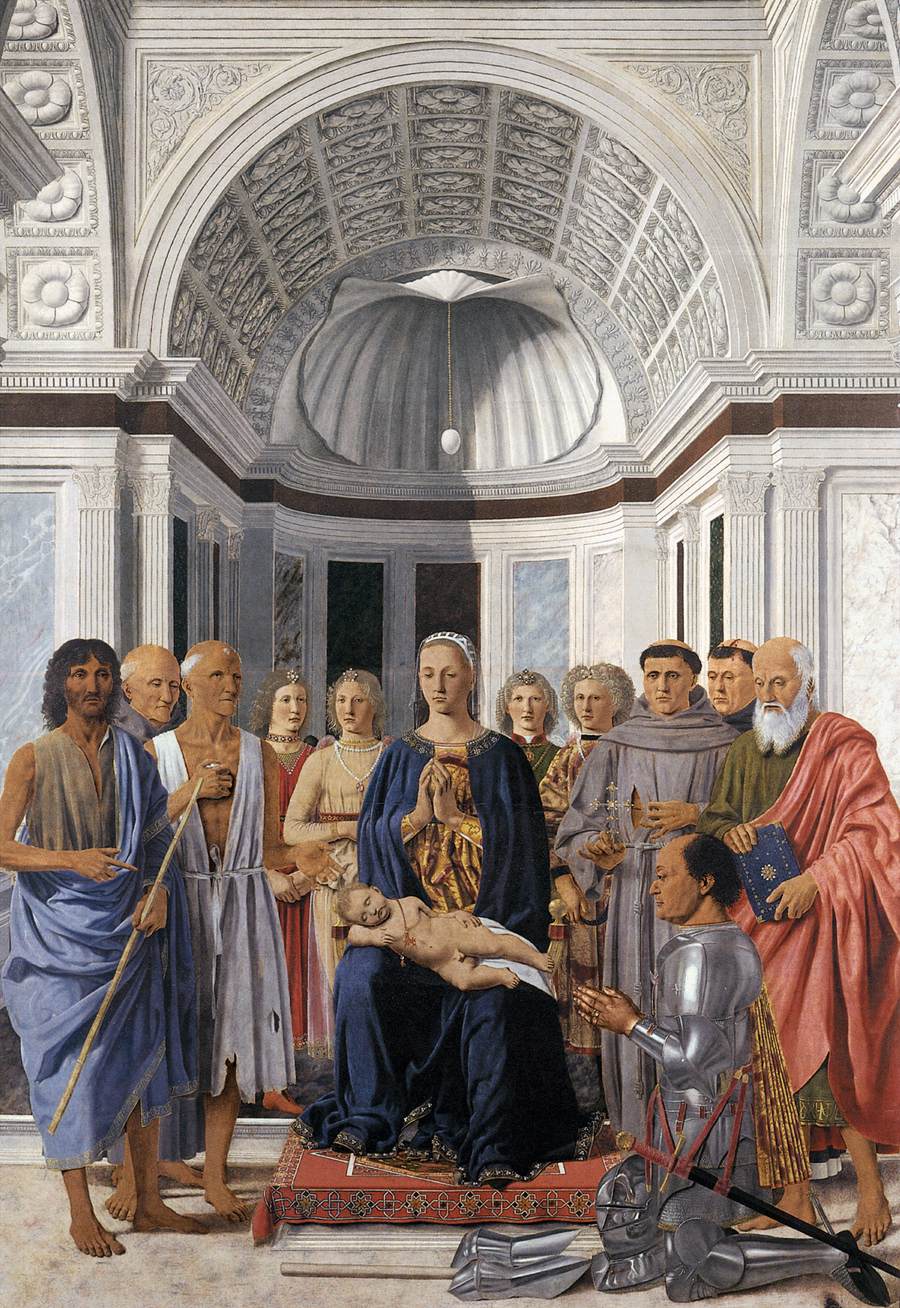 Surely Federico da Montefeltro committed many sins – for us however he remains one of the most illustrious persons of the Renaissance Italy, especially as the patron of the artists. Small Urbino became a very important artistic centre and Federico himself was portrayed by various artist, representing both Southern and Northern European artistic circles. Federico da Montefeltro is very easy to recognise in those paintings, as he was almost always depicted in his profile and his nose had quite an unusual shape. Below you can see a painting “Communion of the Apostles” by Jost van Ghent – I suspect everyone sees that there is Federico in the group of men by the right edge of the picture: 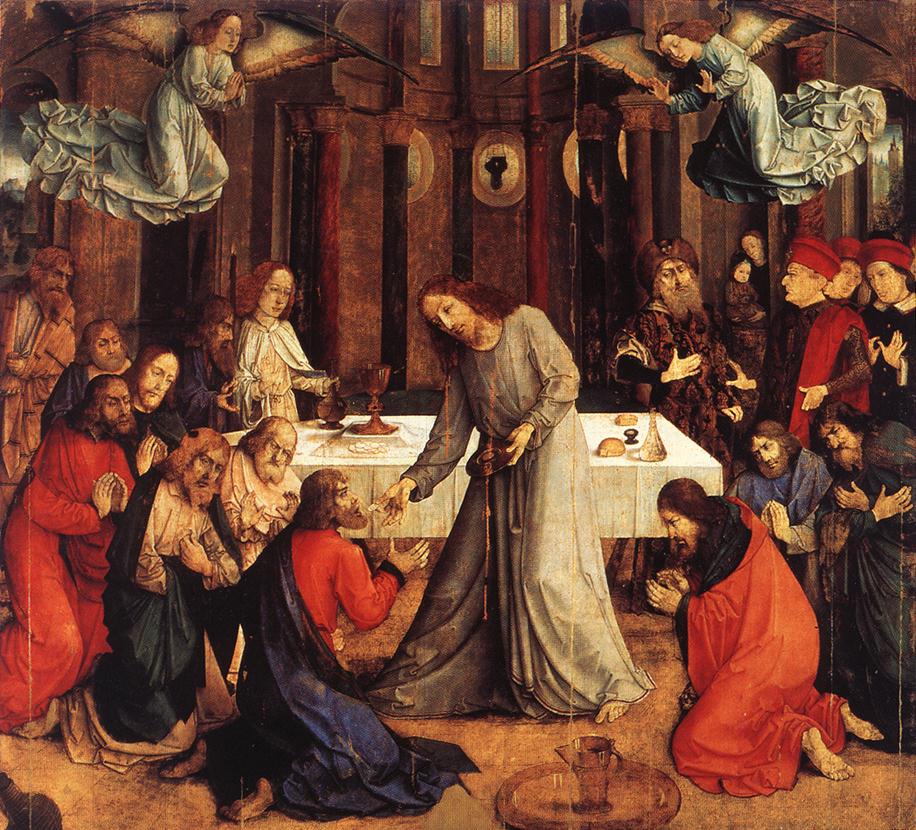 One of the best-known portraits of Federico is a panel from the diptych by Piero della Francesca, created probably ca 1465-72; the other part contains a portrait of Federico’s wife, Battista Sforza. Of course profile portraits were fashionable in Renaissance times as they refer to the antique Roman traditions, however in case of Federico there’s something more. We could ask: why someone who had a nose like THIS would like to be portrayed in profile view? The answer is simple: because on the other side of his face he was missing an eye. 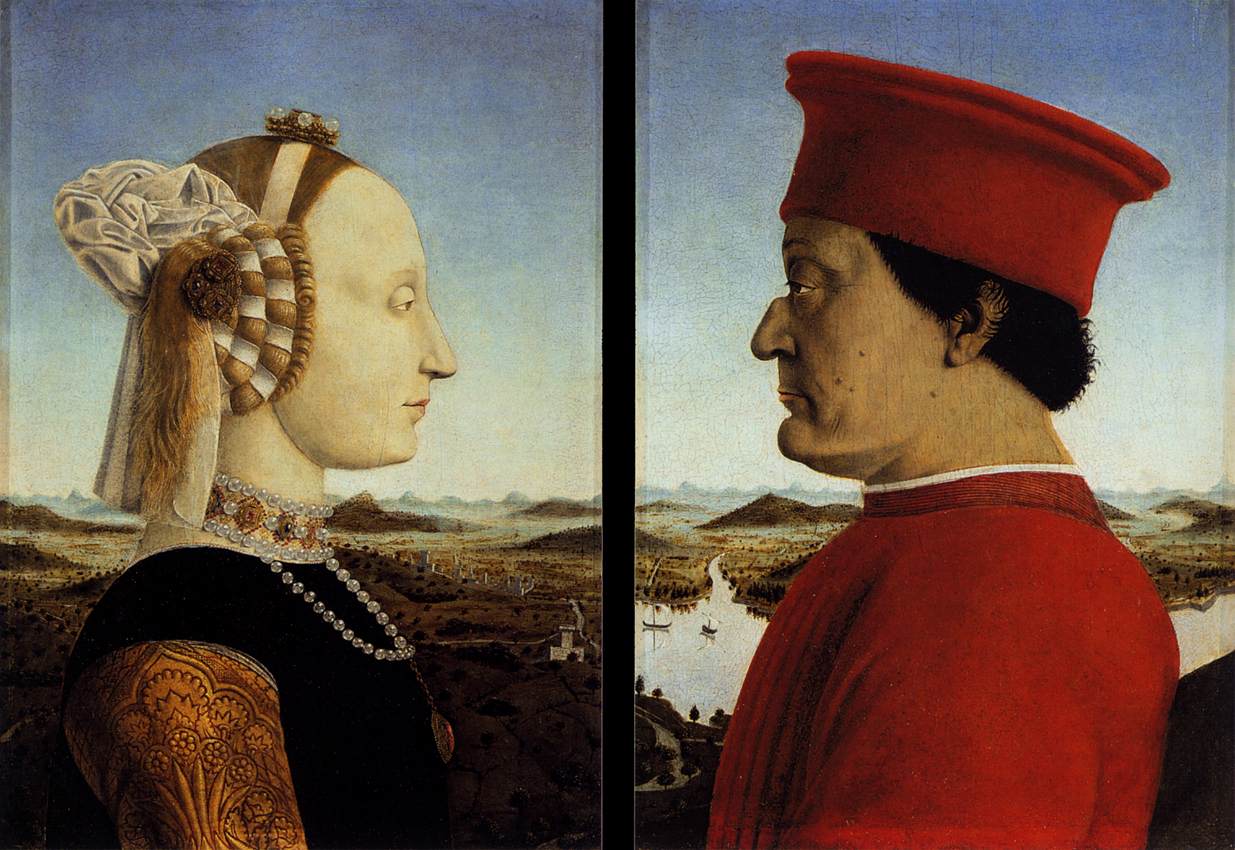 Both lack of the right eye and the unusual shape of the nose were the results of an accident at a tournament. He actually had surgeons entirely remove the injured bridge of his nose to improve a field of vision of his survived eye, so he was less vulnerable to assassination attempts. Apparently in the Renaissance Italy it was more important to be able to look around than to look good. The 3-dimensional reconstruction of Federico’s head shows us that he did not look very good indeed. 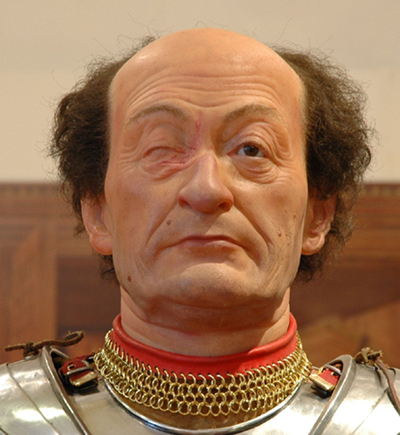 Well, they say that a man does not need to be handsome if he has money and power, as those aspects are much more attractive for women. Finally, isn’t it better after all to be characteristic and recognisable? Of all the handsome dukes the one we will always identify is actually Federico. Apparently he had a nose for creating his appearance for centuries.