Think outside the box 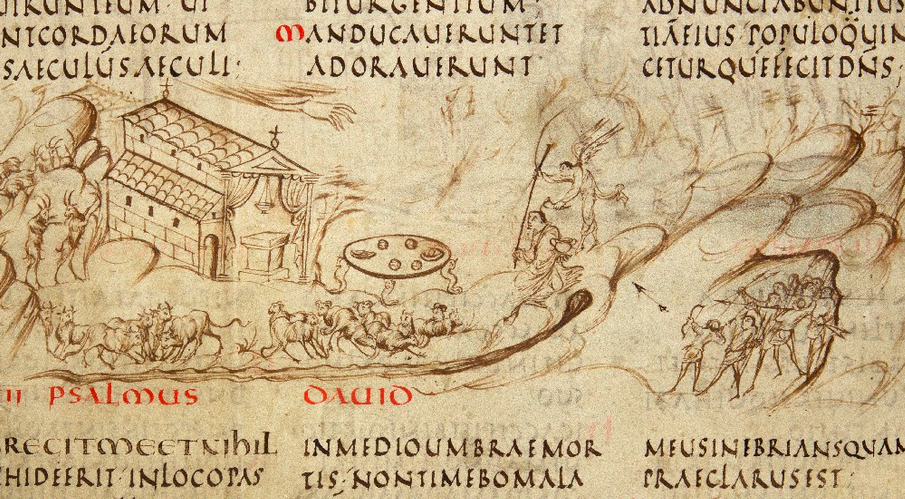 On Christmas 800 AD the Pope Leon III crowned Charlemagne, who then became the first Roman Emperor in Western Europe since the collapse of the Western Roman Empire in 476 AD. After the difficult Migration Period, Western Europe achieved what we call the Carolingian Renaissance, as Charlemagne often referred to the Roman culture to stress that he is actually reviving the Roman Empire. Manuscript illumination was an important part of that Renaissance – so today I would like to focus on one of the carolingian manuscripts. 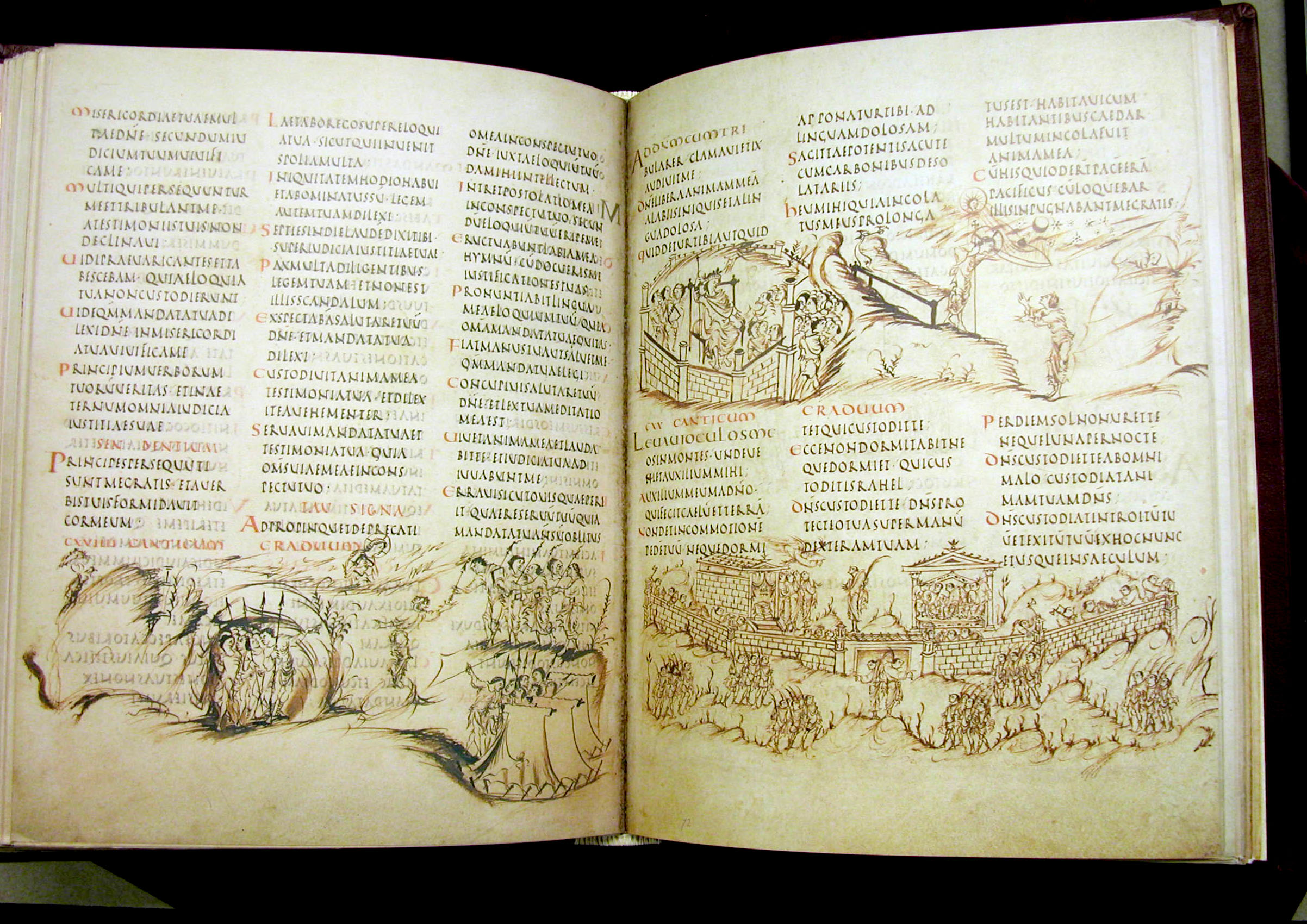 The Utrecht Psalter was probably created around 830, perhaps commissioned by the Archbishop of Reims, Ebbon (possibly as a gift for Charles the Bald). It is kept at Universiteitsbibliotheek in Utrecht (hence its name), and it contains 108 folios (33 x 25 cm). The Utrecht Psalter actually came to Canterbury as early as around 1000, and influenced Anglo-Saxon art; after the Dissolution of the Monasteries it came into the possession of Robert Bruce Cotton (1570-1631), who lent it to Thomas Howard, Earl of Arundel. The latter took the book to the Netherlands, and when he died in 1646, his widow sold it there – Robert Bruce Cotton was dead by that time and no-one made Mrs Howard return the book. University of Utrecht owns the Psalter since 1716. 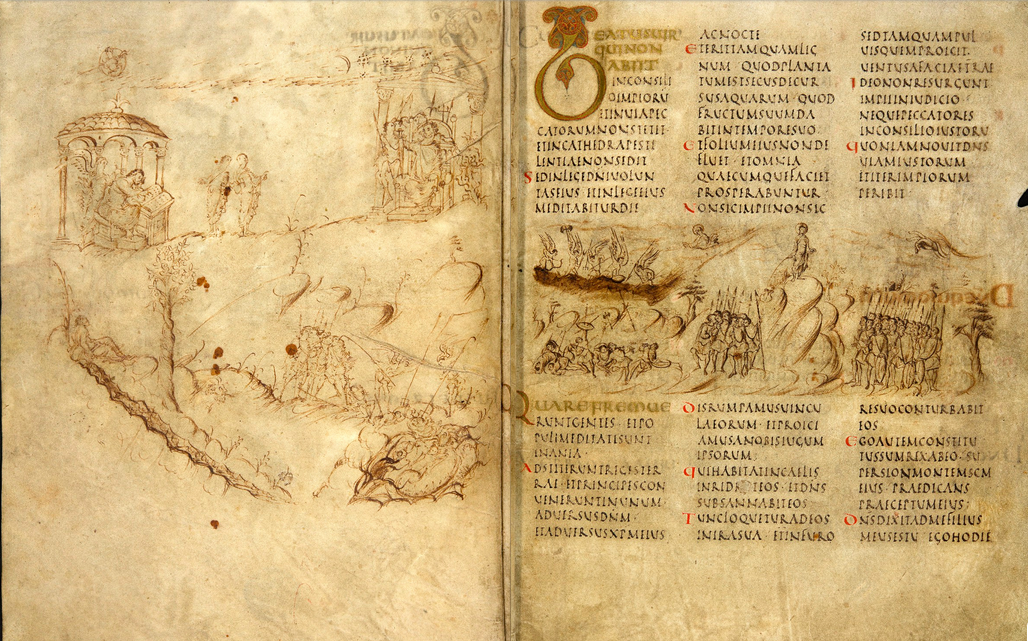 What is so extraordinary about that book? Most of all: the illustrations. There are 166 amazing sketches (rather drawn, not painted): they are full of life, expressive and absolutely unique. How one may at all illustrate the Psalms? They are the poems, they don’t contain stories that can be depicted, but rather poetic metaphores. Nevertheless, the artist that decorated the Utrecht Psalter managed to create the illustrations for each poem, and he actually created quite literal depictions! It is so unique and individual, that it almost seems to be modern, although it was actually created in the 9th century!

Let’s explore the Utrecht Psalter on the example of Psalm 11 (12). The English translation of the text is following:

1 [For the choirmaster On the octachord Psalm Of David] Help, Yahweh! No one loyal is left, the faithful have vanished from among the children of Adam.

2 Friend tells lies to friend, and, smooth-tongued, speaks from an insincere heart.

3 May Yahweh cut away every smooth lip, every boastful tongue,

4 those who say, ‘In our tongue lies our strength, our lips are our allies; who can master us?’

5 ‘For the poor who are plundered, the needy who groan, now will I act,’ says Yahweh, ‘I will grant salvation to those who sigh for it.’

7 You, Yahweh, will watch over them, you will protect them from that brood for ever.

8 The wicked will scatter in every direction, as the height of depravity among the children of Adam. 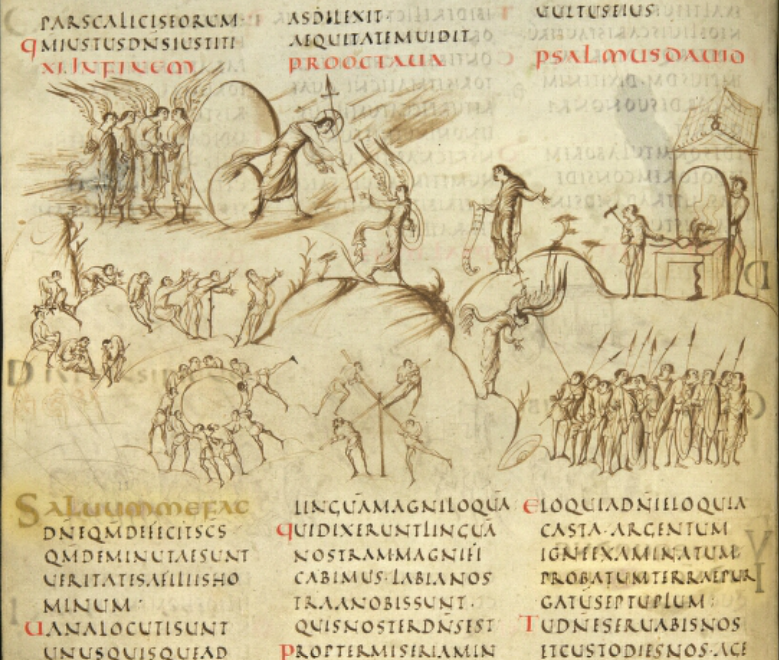 And what is going on in the illustration? At first, we can see poor people crying for help (“Help, Yahweh!”), and apparently God got angry and stood up from his halo (“now will I act,’ says Yahweh”) – we can see him leaving the halo and giving the orders to his angel: 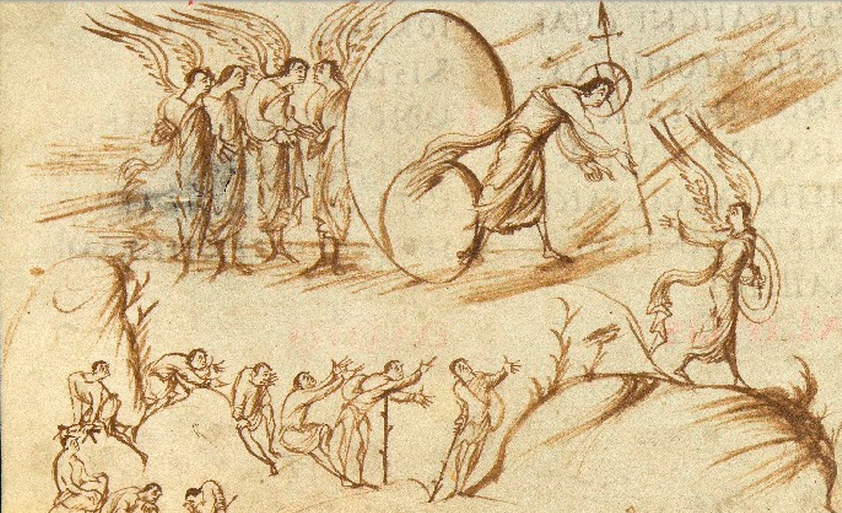 The angel is ordered to attack and so he stabs the wicked people, precisely in their mouth (“May Yahweh cut away every smooth lip, every boastful tongue”): 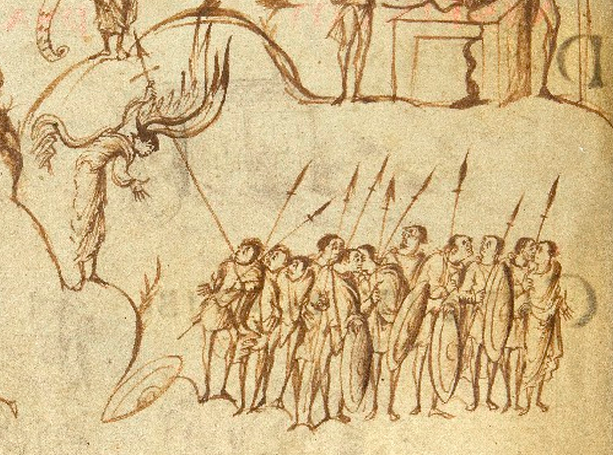 We also see a smith working on the silver, as ” Yahweh’s promises are promises unalloyed, natural silver which comes from the earth seven times refined”: 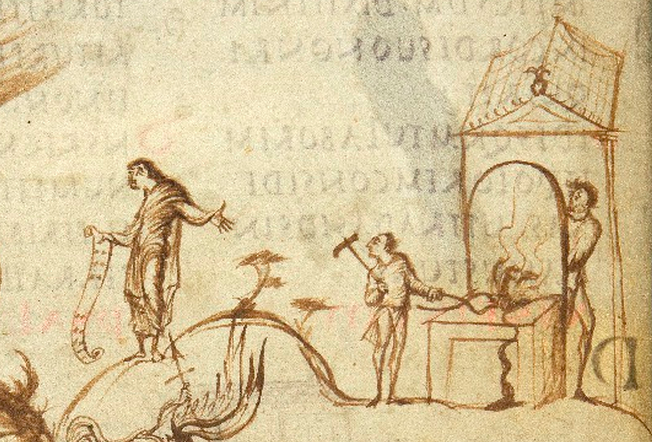 And finally the last verse – in English it reads “The wicked will scatter in every direction”, but the direct translation of latin in circuitu impii ambulabunt would rather be “the godless run around in circles” – so we can see them running: 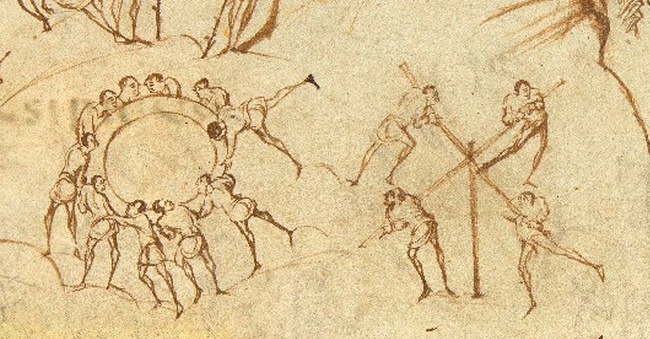 And just like that, one Psalm after another, the poetry is literally depicted! It is no surprise though, that in case of the Psalm 129 (130) famous verse ” From the depths I call to you, Yahweh” (lat. ”De profundis clamavi ad te, Domine”) is illustrated with an image of a man calling God from a deep hole… it seems clear that it is in fact a huge depth, no mistake! 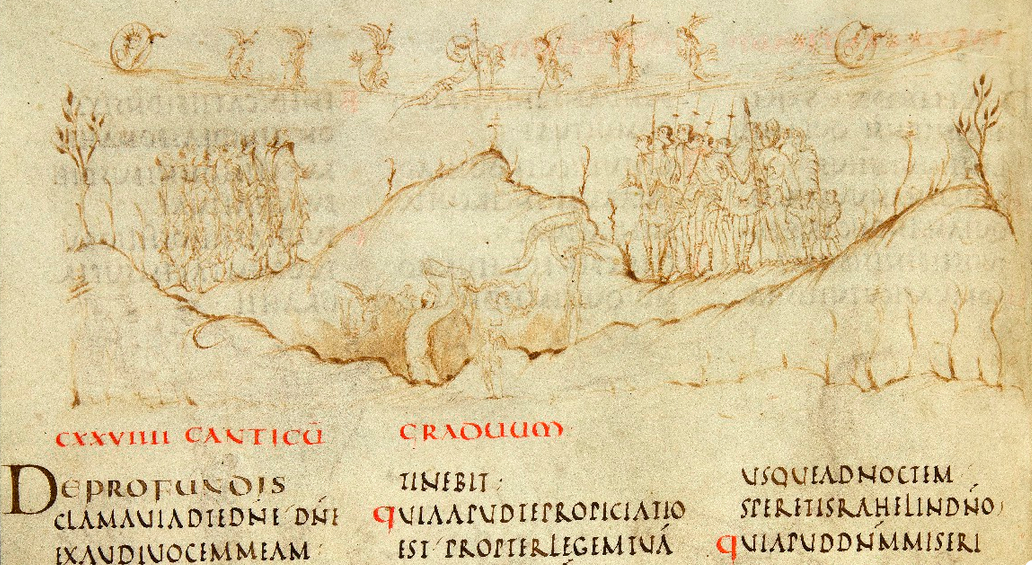 During later centuries the decorations of the psalters became standardised, they were usually illustrated with some figurative initials and the miniatures showing the life of Christ – as usually, the massive production kills the artistic individualism. It seems that the earlier mediaeval artists were actually the most independent ones, so we should stop talking about the “dark ages” and rather admire those people, as they were able to work in a very passionate and creative way – they were thinking outside the box, as we would say today. And that is exactly the case of the Utrecht Psalter, although it was created almost 1200 years ago!

You can read the whole book on-line, as it has been digitalised and the high quality scan is available here: http://bc.library.uu.nl/utrecht-psalter.html

Also, as the Utrecht Psalter been nominated for UNESCO’s Memory of the World Register (in mid-2015, UNESCO will decide whether the medieval manuscript will be given a place in this documentary heritage register), some interesting educational documents have been created on it. For example, there are two videos about the Psalter:

There is a hypothesis that the illustrations of the Utrecht Psalter were not an original creation of the Carolinian artist but a copy after something Ancient that did not survive. I have just discovered that this hypothesis may be supported by one very interesting detail. Apparently, in Psalm 103 (104) there is a strange animal mentioned – the animal that turned out to be quite a challenge for the later translators of the Bible. In original text it is shafan and it seems we should translate it as hyrax, which is an animal living in Africa and Middle East. That is why in the New International Version of the Bible the verse in question (Psalm 104:18) is following: ‘The high mountains belong to the wild goats; the crags are a refuge for the hyrax”. The animal looks like this: 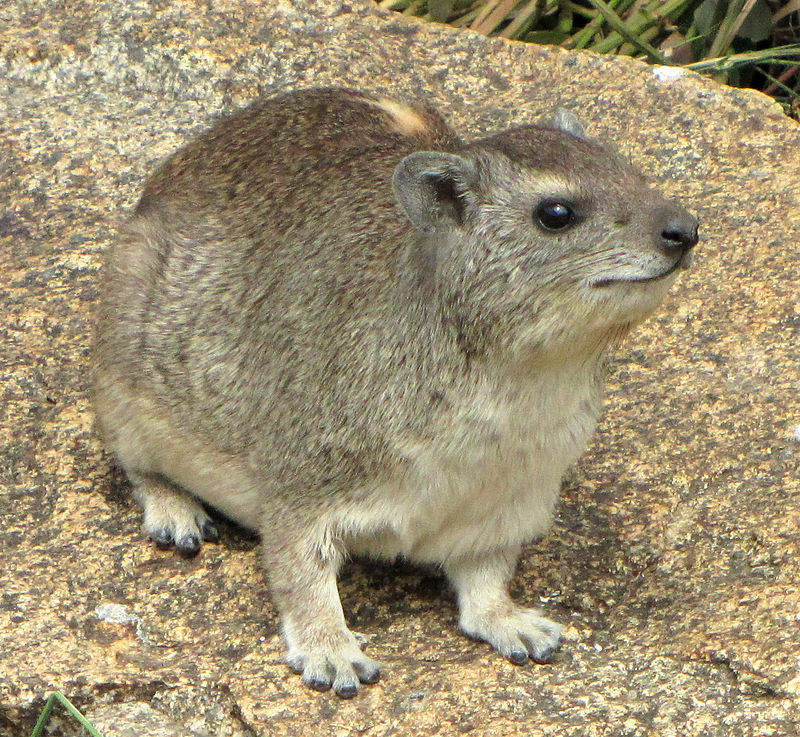 And why is it in reference to the Utrecht Psalter? Well, it seems that the ancient translations had a problem with hyrax; the Syriac version and greek Septuaginta in Codex Alexandrinus changed it into “hare”. But Saint Jerome went even further and actually used the word “hedgehog”! So as a result the Psalm in Vulgate version says “montes excelsi cervis petra refugium ericiis” – that is “the high hills are a refuge for the deer and the rocks for the hedgehogs”. And what do we see in the picture illustrating this psalm? Well, it may be hyrax, or perhaps hare or badger, but certainly not a hedgehog! The text of the Utrecht Psalter is a latin Vulgate, so the hedgehog is there. It seems that the illustrations were not created in reference to the text in this manuscript after all, but perhaps copied from some other, possibly ancient Syrian or Greek version. 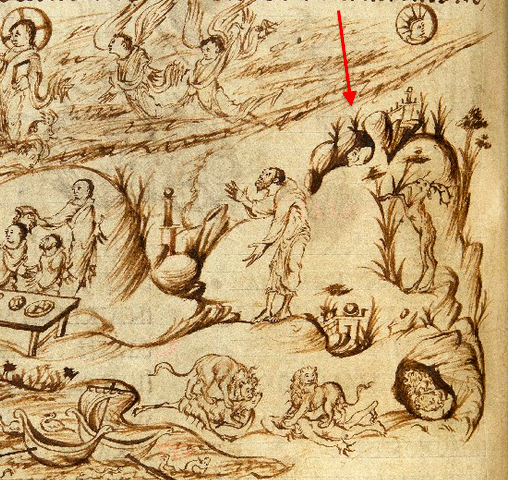