Home » Blog » The other side of the story
Tue03

The other side of the story 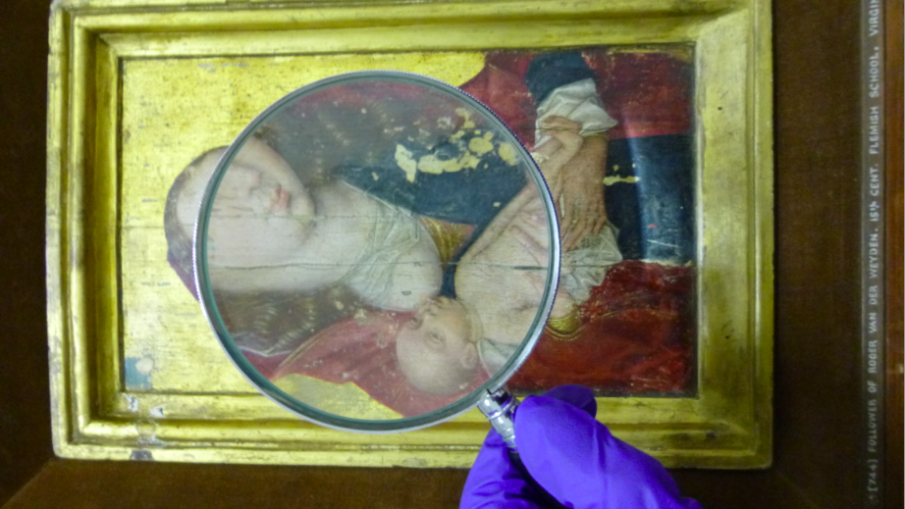 My UK research is getting to its end, but as I am working on the paintings, new things are still coming out. Let’s get back to my favourite “Virgin with a Breast on her Neck” from the collection of Art Gallery in York. I have already mentioned that painting in one of my previous posts (“Touching Middle Ages” – available here). But now we will look on the other side of that story. Literally: the other side. 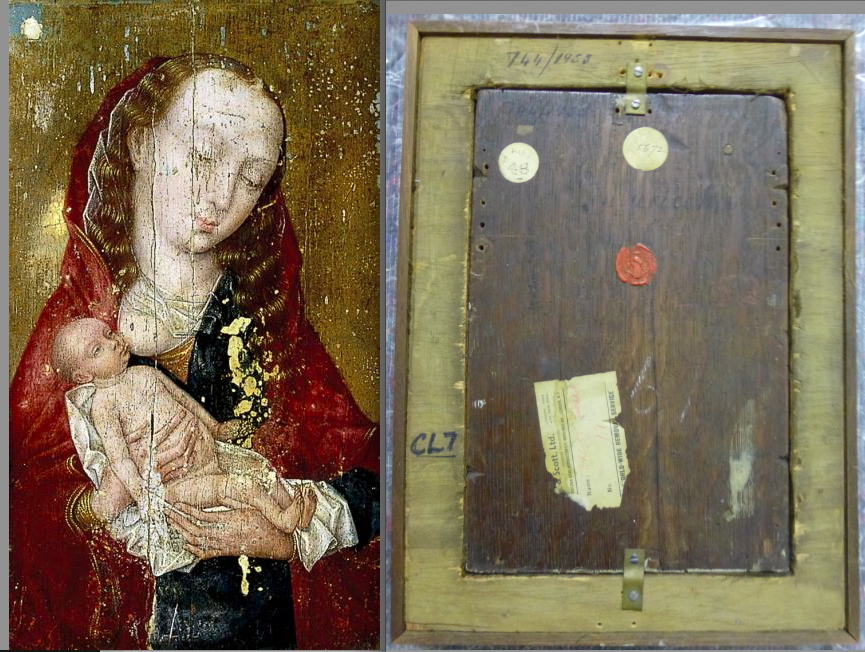 Of course, every art historian thinks that what matters the most is what’s in the painting. Meanwhile, in many cases extremely important things can be actually spotted on the painting’s back. Sometimes we may find an inscription (even with the painting’s title, date or even the name of the painter), and sometimes there are labels documenting the exhibitions that the painting was shown on (often in the 19th century!). We may also find labels or stencil marks proving that our painting was sold in a particular auction house. And finally, there may an inscription or even a seal of the past owners, which enables reconstructing the painting’s history.

So, when I was in the magazine, examining the Virgin from York obviously I turned the panel around and had a look at it’s back. And what have I found there? Well, it was actually a seal. And the best thing was that apparently no-one have ever examined that seal before, so the history of that particular painting have so far remained obscure. 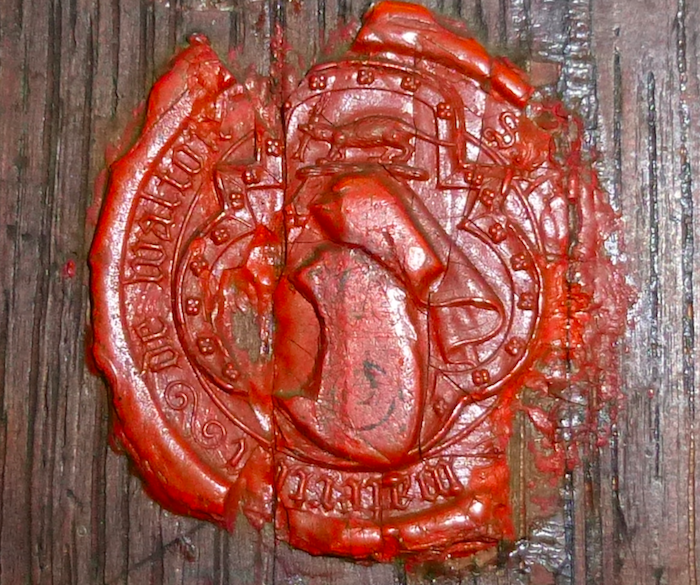 As usually in case of such old seals, this one is also almost unreadable, at least in its main part. There used to be a coat of arms, but we can’t see its content anymore. There is still some of the inscription preserved, the well-readable part is “de Walton”, but that turned out to be possible to link with several families. But wait a minute – there’s something else! An animal above the actual coat of arms – that is so called “crest”. It is an element placed on the top of the helmet above the coat of arms; it all comes from the way the medieval knights dressed, as they usually had their coat of arm on the shield (or on whatever they wore, as well as their horse), and the crest was indeed on the top of the helmet.

So, what crest is that? It is an animal, that turned out to be an otter. Moreover, it holds a fish in its mouth. I did some research and I found out – an otter with a pike is a crest of the family Waterton of Walton. The crest was granted to Sir Robert Waterton in 1501, and it decorates the Walton Hall estate. 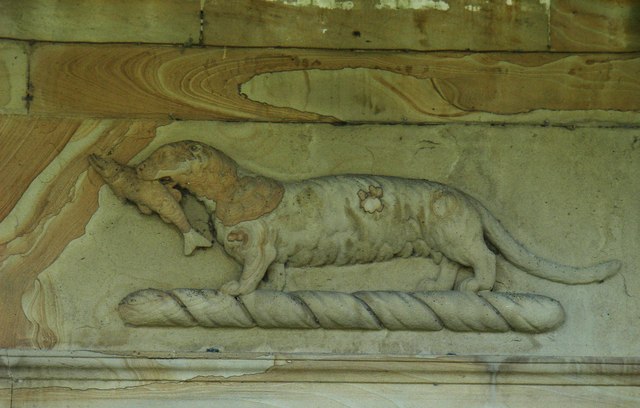 We can be sure of that, as the remains of the inscription on our seal seem to be “Sir […] Waterton de Walton”. Unfortunately, we are missing the part with the first name, but on the other hand it may not had been very helpful anyway, as the names in that family (any in many others) were repeated in almost every other generation. In any case, we know one thing now: the painting comes from the collection in Walton Hall, which belonged to the Waterton Family until 1876, when Edmund Waterton (1830–1887) went bankrupt and was forced to sell the estate. It seems most likely that the seal actually belonged to his father, Charles Waterton (1782-1865). He was quite an extraordinary person, that Charles Waterton! He collected many bizarre objects, called “curiosita”; he was an early naturalist and explorer, he travelled a lot (e.g. to the South America, from where he brought home some weird things and substances). He was considered to be very eccentric, as he was one of the first opponents of a pollution of environment (which was not a popular approach at the beginning of the 19th century), and was supposed to have weird sense of humor – for example, he was said to dress as his own butler to teas his guests. He had many interesting things in his collection, such as taxidermied reptiles, dressed as the famous Protestants. Well, Charles Waterton himself was Roman Catholic – he claimed to have had many Saint ancestors, such as Vladimir the Great, Boris and Gleb, Stephan of Hungary, Margaret of Scotland, Mathilda and Thomas Moore. Nevertheless, he apparently valued his bizarre objects higher than his holy ancestors, as he did not decide to have himself portrayed with any of them, but rather choose a stuffed head of a cat. 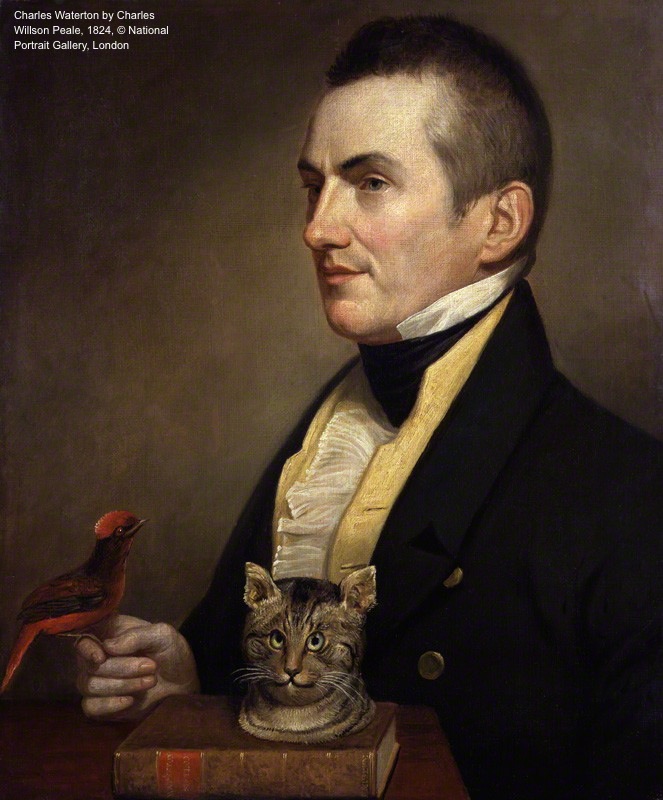 Somehow I have no doubts that he was the right person to appreciate the weird beauty of the Virgin with a Breast on her Neck.